Eat Me, Drink Me. 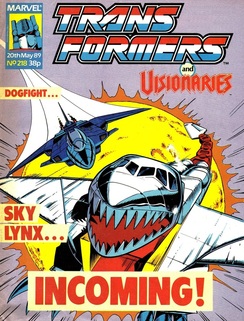 
Pssst—have you slipped a gear?! I want to die an Autobot warrior, not a gourmet meal!


Lee Sullivan’s—possibly delayed from last week—cover is sadly probably his weakest work on the entire series. Though this is more the fault of an undramatic idea than his talent, Dogfight and Sky Lynx just flying isn’t enough to be especially exciting in and of itself so we get an odd giant fireball behind them to try and add excitement. It doesn’t work.


The choice of Sky Lynx as the focus of the cover (which is actually the last to give joint focus to the British and American strips and not 216 as I claimed, this is down to me not actually noticing Dogfight before, forced to the back as he is) is also a bit odd as he may be in the present this time, but it’s only for three panels. 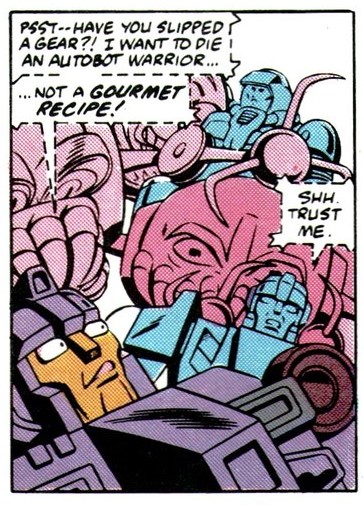 Great warriors don't pull faces like that.
Inside, the third part of Recipe for Disaster! makes up for the lack in incident last week by being packed with plot, characters and locations. This may not be a good thing though as we take a turn to the strange and get one of the least likely homages ever.

With their attempt at fighting their way out having failed, it’s down to Cloudburst (or “Cloudy” as Landmine calls him in an attempt to make it look as if he has a personality. It doesn’t work) to talk the Autobots off the dinner plate. His solution is to put it mildly, novel. He tells the Mechannibals what they really need to do is properly garnish their meal otherwise it’s just a waste of good food.

Master Mouth actually agrees, but as they’re missing one of the ingredients Cloudburst recommends (so if he had been fully stocked, the whole gambit would have failed) he of course sends his two Robot Hunter employees to go to the planet Femax to fetch it.

No, wait. He actually lets Cloudburst go himself. But naturally he keeps Landmine as a hostage to guarantee his return.

No, wait. Cloudburst convinces Master Mouth Landmine should come as his assistant. So instead Berko gets to be the hostage, which Master Mouth thinks will be enough as the Autobots tried to rescue him once. Except they didn’t off course, they just offered him a lift and there’s nothing to suggest they’d voluntarily be eaten on Berko’s behalf.

As plans go it’s nonsensical and contrived, especially as the Autobots actually do go to get the special ingredient of lead sulfide crystals in a far too enthusiastic way. But what makes it hugely entertaining is Landmine’s boogle eyed incredulity at the whole thing, which even extends to him thinking Cloudburst is going to garnish him personally so he can be eaten whilst the other escapes. Delbo arguably over does his facial expressions, but it’s still very funny until you stop to think about the logic of it all. 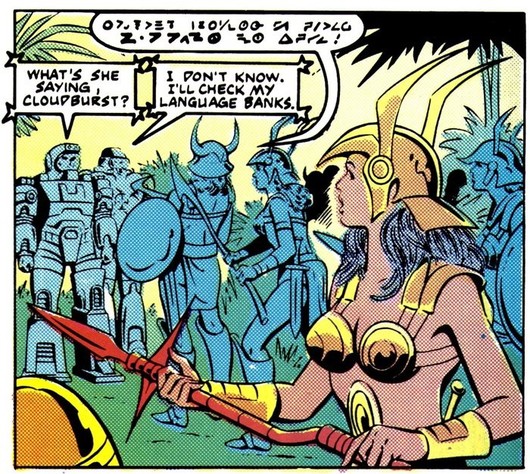 "This bra chafes like mad"
Still, they leave—flying off in Cloudburst again—and Hi-Test and Throttle are pissed (for no real reason as they've turned the robots in and will presumably get paid regardless) and decide to follow them. With cover star Sky Lynx observing all this and deciding to follow the followers.

Which leads us to the planet Femax and...yes...the Planet of the Women. I’m not entirely sure what possessed Uncle Bob to try on this well worn trope. Whilst it fits in with the 1950’s B movie aesthetic of the Mechannibals themselves this is a—rightly—much more derided and thankfully just about dead by this time idea that’s far less fun than silly monsters. Especially as it usually involves the uppity women who think they can rule themselves learning they do need men in their lives, though as I’ve blocked most of this out I honestly can’t remember if that’s where this is heading. I’d have hopped the slightly earlier Star Trek: The Next Generation episode Angel One (where Bonnie from Knightrider hates men until she gets given a good seeing to by Riker) would have killed the entire concept.

But there’s actually a homage to a much earlier Star Trek episode going on here, something made apparent as the Autobots arrive on Femax and find dim looking men live on the surface, whilst inside a cave in a mountain lays a paradise run by smart—and extremely disdainful of men—women. Yes it’s Spock’s Brain. Though in this case rather than go-go boots and miniskirts the women in the mountain with the special crystals dress more like the cliché of warrior Amazonians.

There’s also a much more subtle tip of the hat to a more well regarded piece of science fiction going on here, when Cloudburst and Landmine are attacked by The Women Warriors (understandably, Landmine blows open their front door! His enthusiasm to be eaten is impressive) they have to keep them talking until their translation computers can get a handle on the local language. Which is exactly how things work in Larry Niven`s Ringworld and (presumably) his other Known Space novels. Interestingly the woman Louis Wu meets in that book who he presumes to be a Ringworld Engineer—things get more complicated n the sequels—is a tall sensual giant with a bald head. Just like the First One we’ll be meeting next week. It seems Bob is just grabbing ideas from anything he’s seen or read that week. God knows what might happen if he catches some wrestling on TV.

The instalment ends with the less than dynamic decision by head guards-woman Shandikar to take these horrible men to their leader, the aforementioned First One. It’s a somewhat mental six pages that jumps all over the place and is on the brink of verging into full on sexist territory, but it’s also never dull and there it’s probably the only bit of Transformers fiction where the phrase “Landmine has the best bits” can be used.

The big Dogfight scene promised by the cover.
It’s actually the black and white story that has the least content this week. Dogfight tries to attack Starscream’s corpse...and is instantly swatted aside. Luckily Backstreet isn’t an idiot and realises the corpse is in conflict with its Starscream and Underbase halves. This is an idea Furman clearly likes and will revisit more than once, most obviously the switches in personality between the different minds in the Ratchet/Megatron hybrid will be portrayed through almost identical dialogue as Star/Base has here.

The Underbase does win through, but it’s a moot point as Hi-Test and Throttle simply drain all its power—in a really nice use of the Powermaster gimmick. The narration claims Dreadwind and Darkwing will get this juice later on which will be quite a kick for them—leaving a dead body they then run off with. Which Backstreet hilariously tries to pass off as a victory.

Over with Override there’s an attempt at an ethical dilemma as he rescues Susan and she implores him to help her save her crew from being eaten. So he suggests to the cannibals that they really shouldn’t eat the humans without a proper garnish...

No, wait (though it’s an amusing coincidence the intersection on the Venn diagram of what the two stories this week have in common is cannibalism)...he sees the Decepticons flying off and has to chose between chasing after them or saving the humans. Except he can’t fly, his spaceship has been destroyed and he’s low on energy So Susan’s spirited argument about why he needs to act about the current danger rather than possible ones is moot. But more than welcome and after my complaints about Arcee in Space Pirates! it has to be said Furman is well ahead of Budiansky on the decent female characters stakes this week.

You try spinning it that way on your report.
It’s an unsatisfying conclusion to an unsatisfying story that doesn’t show either Wildman or Furman at their best. But the series has hit its biggest stumble in adapting to the new format and the only way is up from here.

Oddly the Transformation page goes out of its way to mention the Autobots in Race With the Devil don’t have a ship with which to follow the Decepticons in its recap of the story so far. As this detail doesn’t come up in the story itself this is a plot hole that otherwise might have gone unnoticed by the kids at home. The Sidebar announces the end of Visionaries next week (under the headline “Almost There!”, making the Knights sound like a contractual obligation to endure) and tries to big up the return of Action Force by mysteriously hinting at Raptor. That’s the man who dresses like a bird if you’ve forgotten.

The bottom half of the sidebar basically confirms the cover swap of the last two weeks by welcoming Jez Hall aboard as a cover artist, though there’s been enough time to change the tenses to say his work was on the last issue. All the comments on last week’s entry basically agreed that was the worst cover of the entire run by the by.

The William Tell comic advertised last month ultimately never came to pass, but as the comics for it had already been written and drawn an attempt to recoup costs has been made by putting them into a graphic novel, which gets a rather nice full page advert. Though it oddly makes William Tell look like the 2016 Kevin Bacon.

On Dread Tidings this week’s Dreadwind Fails to Answer Questions Properly! Sees Ian Snell (great name) from Bristol ask how Skywarp can be in the Underbase when him being killed was a big part of the resolution to Target: 2006. Which basically gets a shoulder shrug from Dreadwind. He also categorically says Galvatron is dead and caught in an eternal time loop when Transformation has already teased his return. 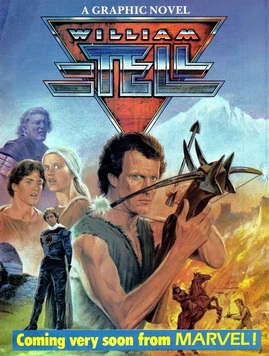 Tell me that's not Kevin Bacon.
The penultimate Visionaries sees it struggle to give every character a distinctive moment to show off their skills as Cryotek and Cindar have a punch up. But it’s in an ice cave so...it’s sort of relevant to one of them? More amusing is Darkstorm forcing various characters to join his team by trapping them in glue and only freeing them when they pledge allegiance. The scoundrel. With the page count running out, the old wizard arbitrarily decides the contest is over and invites everyone present to enter his passage and collect their prizes. Which will hopefully include a good scrubbing brush to get that glue off.

Speaking of prizes, Combat Colin and Semi-Automatic Steve go on a TV game-show called Blankety Bullseye You Bet, a darts based quiz hosted by a man with the catchphrase “Smashing”. There’s something very familiar about all this. Steve wins the show by simply shooting the dartboard with a massive gun, resulting in them being given all the top prizes in the hope they’ll go away and never come back.

Next week, Skids comes back with a new face and a head full of dreams. 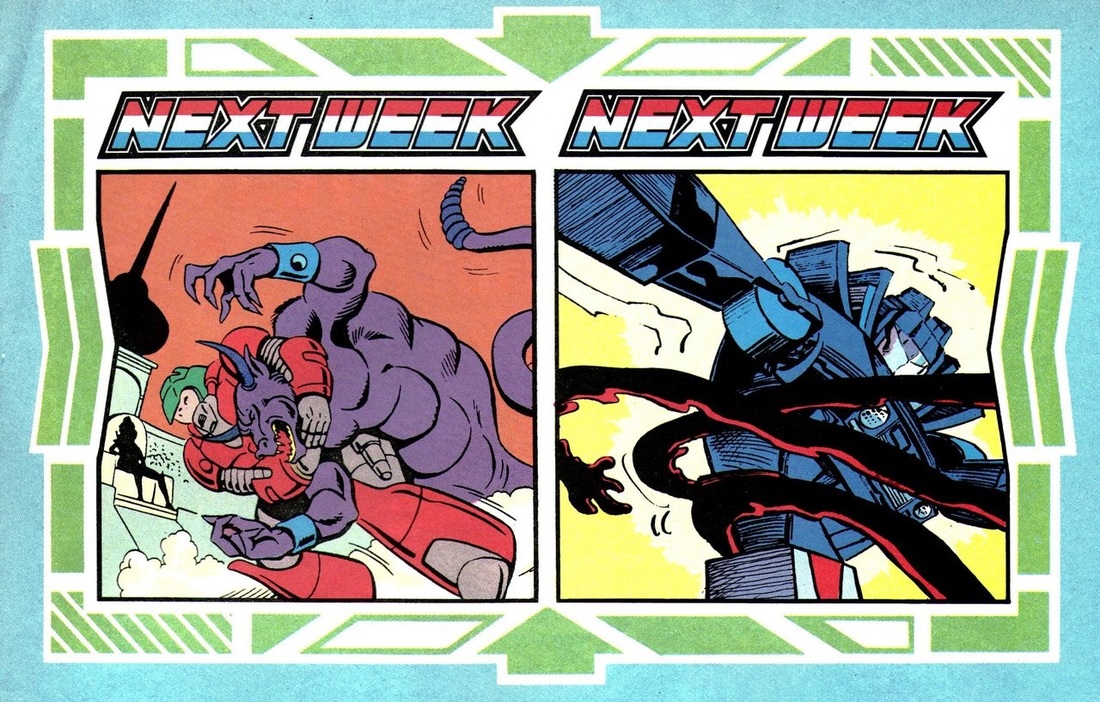