And Then the Witch Doctor, He Told Me What to Do. 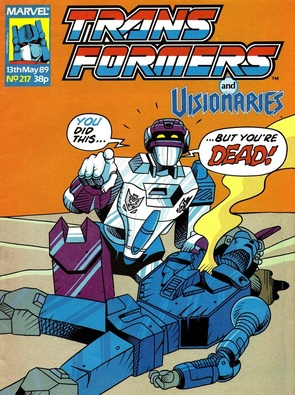 
C’mon—let’s go see if our Transformers are still in one piece.


The cover by J. Hall (according to the wiki Jez, I prefer to think it’s Jerry, much more on this later) is especially interesting this week as it foregoes the usual action scene accompanied by a pun, and instead features Dreadwind making a shocked fourth wall breaking plea to the reader that he thought they were dead. This surprise that something that was expected to have flat-lined by now but is instead still walking about—albeit in a reduced state—feels so meta it almost feels intentional.

Though as two of the four covers during the run of Race With the Devil are devoted to it, it’s also tempting to think these were commissioned before the format change was known about and are the last holdover from that era. Though in that case it’s perhaps odd that the second doesn’t more heavily promote Starscream’s return, so that probably is a coincidence.

Oh, and one last thing before diving into the comics themselves, last week I completely failed to notice the Classic Covers Calendar was mistakenly the one for June. How I managed to get a reputation as an expert on this comic I’ll never know (well, that’s not my actual reputation). 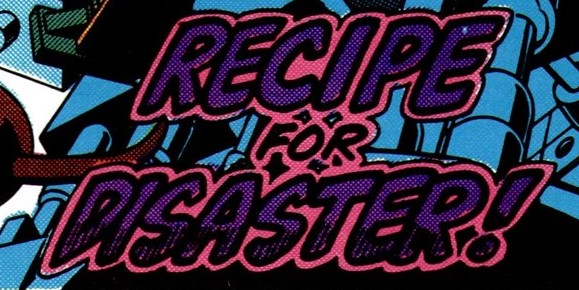 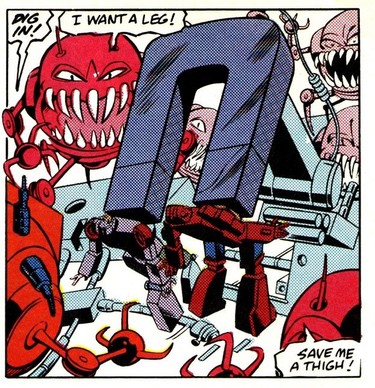 Delbo's greatest moment.
Another mistake I made last week was assuming we’d be seeing the Planet of the Women in the first part of Recipe for Disaster! This is in fact not the case, as we instead see the plot stall in some of the most gratuitous padding ever seen in the comic. The only new bits of information we learn this issue are that the Mechannibals make their microchips by coughing up the remains of their victims (which understandably horrifies Cloudburst and Landmine, it’s also quite amusing the Mechannibals are literally selling their crap) and that Berko has been captured as well.

Otherwise, we get a lengthy recap of the story so far, plus the Autobots briefly escaping their bonds only to get quickly recaptured, making the entire exercise pointless even if it does make for a reasonably solid cliff-hanger.

What makes it though is how they briefly escape. The Mechannibals separate them from their shells, meaning the Autobots can mind control the plastic for support. How this is done though is amazing and perfect: Master Mouth wheels out a giant magnet that looks exactly like the sort of giant magnet you’d expect B-Movie monsters to wheel out (though Nel Yomtov lets the side down by not colouring it red), it’s perfect and hilarious and exactly suits the tone Uncle Bob is aiming for with these creatures. It really shows Delbo is totally getting this story, and it may actually be the perfect image from his run on the book. And to be fair, the Mechannibal dialogue is, when not perfunctory, hugely entertaining as well. “Save me a thigh!” indeed. Otherwise though, it’s a very flimsy 5 pages. 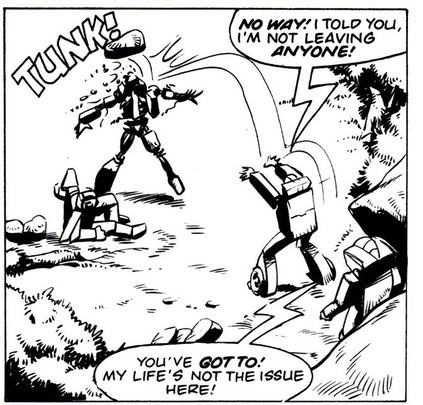 The terrible power of Starscream can only be stopped by bunging a rock.
The third part of Race With the Devil is also rather flimsy this week, and oddly decides to skip a potentially exciting part of the story as we jump further ahead in the narrative from where last issue ended. So instead of seeing the Triggerbots argue over whether to take on Starscream even if it risks hurting humans, only for him to take advantage of their debate to overpower and disarm them whilst hurting Backstreet...We instead get told about it as they run away very quickly afterwards.

It’s oddly undramatic for an author as experienced as Furman was by this point and it’s very easy to see how this missing sequence could have been combined with this scene of Starscream firing laser beams at them as they run away so as to avoid us having to waste time with the show and tell. Considering Backstreet gets left behind anyway so the others can go protect the humans, it would have made almost no difference to the narrative and could have freed up some space to allow Starscream to show off his zombie party tricks in a more impressive way. The main appeal is Dogfight being incredibly grumpy at the injured Backstreet.

The humans and Nebulons meanwhile are hiding in a cave, though Hi-Test and Throttle quickly leg it to use their Powermaster Powers to revive their partners. Susan Hoffman then goes on to make you wonder how she gets anyone to work with her at this point considering they all seem to be confronted by deadly danger (perhaps that’s why the Heritage Society put her on the distinctly un-archaeological looking in a volcano job?), as her team are grabbed by the Juluth tribe. The removal of Winston from the Real Ghostbusters line-up does make the only black people in a story set in Peru being loincloth wearing savages slightly more uncomfortable than it otherwise would have been. 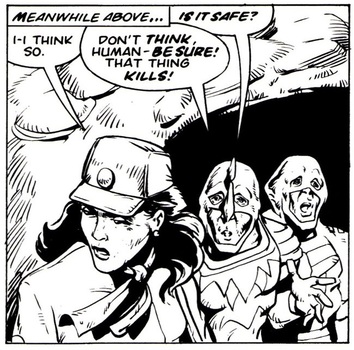 "Is Slimer out there?"
The faux cliff-hanger is actually rather good despite being understated, as Dreadwind (who is clearly getting more prominence than Darkwing—including the cover—because of the letters page) declares the Transformers can’t stop Starscream, but the small fleshy Nebulons can!

This is an oddly structured half overall, and Wildman’s art continues the trend from last week of being below his usual standards on everything except the decaying Starscream. As an introduction to the black and white era, it’s now firmly into putting wavering readers off territory.

One interesting thing about the formating is that, even though this was always going to be the start of an issue, it doesn’t have its own logo and instead uses the generic one from the recap boarder normally used on American stories (and British over the last few weeks) that have been cut in half.

The interesting things on the Transformation page this week are all on the sidebar. First, the comic is proud to announce that Wanted: Galvatron—Dead or Alive! is soon to be reprinted due to high reader demand for more Death’s Head. The sneaky thing is that the average reader could be forgiven for thinking this means a forthcoming Collected Comics, especially as that story would be about due for the next one. It does talk about readers needing to stick around “Here”, but it’s just oblique enough as not to flat out admit reprints will soon be added to the books woes.

I'm sure this will go down well.
Beneath this, they try to entice readers to keep reading the book by the promise of returning artists on covers. The “Stay with us guys!” at the end almost sounds pleading. This is rather undone by bigging up Lee Sullivan’s cover for this issue right next to the credit for J. Hall. As next week’s cover is actually by Sullivan it seems they were swapped at the last second, presumably because someone noticed that putting Sky Lynx on the cover when he’s only in one flashback panel might not be a good idea.

It’s an amazing day on Dread Tidings as—after almost five years—someone (in this case Carl Key from Melksham) finally asks why Soundwave is sometimes purple. Sadly in an example of Dreadwind Fails to Answer Questions Properly!, Dreadwind fails to answer this question properly, just suggesting Soundwave might have been cold. He also refers to Ratbat as Decepticon leader in the present tense. Is Euan Peters actually reading the comic he’s editing at this point?

Visionaries gives the girls their chance to show off their special skills as Galadria fights Virulina in a lake. The highlight though is the “Skeleton blows out a torch” moment that always stuck in my memory from the closing credits of the TV show.

Combat Colin has a new invention: The Propeller Hat! There’s a nice subversion here as Steve predicts the joke—that the hat will fly off without Colin (an idea which makes a passing bee laugh)—only for it to actually spin him round so fast he drills into the ground.

Next week, will we actually reach The Planet of Women? 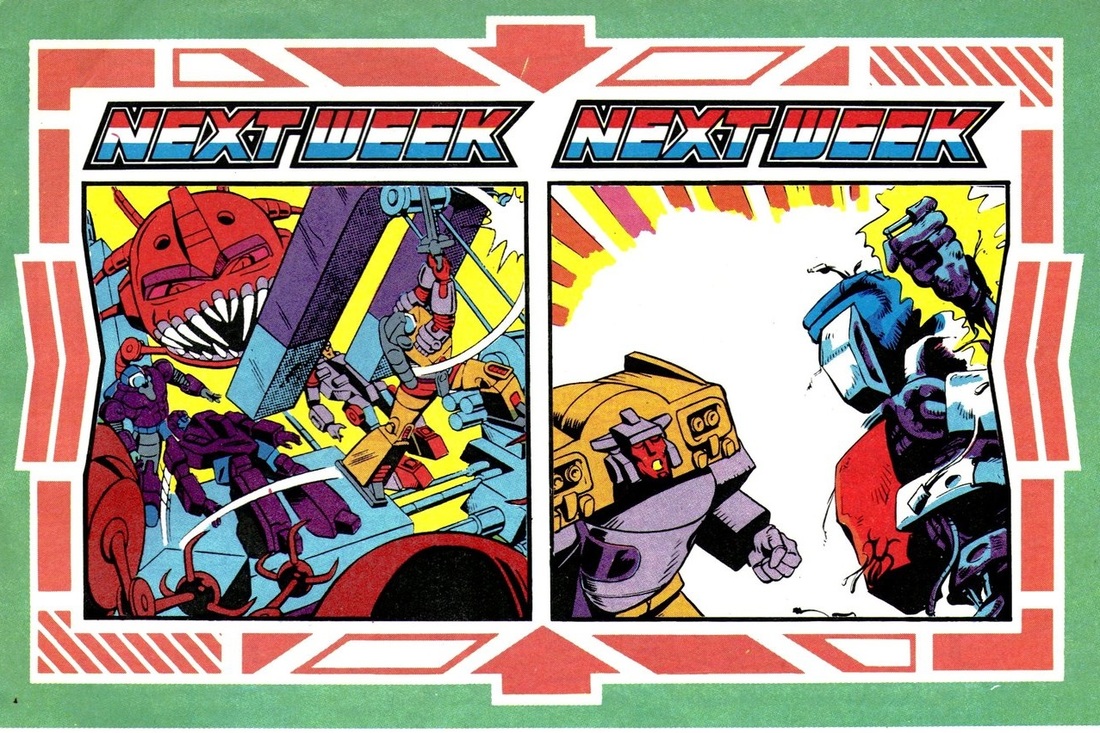