You Remember Lucifer? He is Even Spookier. 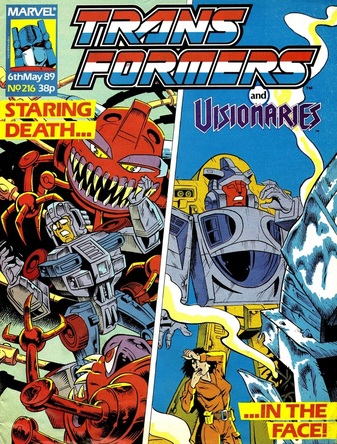 I don’t believe it! Why is it always robots with me? Why?

*The title is shortened to just the Mechannibals right up to the end.


First up this week, a gratuitous advert. Not for me for a change but for Nick Roche. His Sins of the Wreckers series has concluded this week and as it suffered from delays beyond the control of anyone involved it has gotten a bit overlooked. It is also brilliant, and well within the bailiwick of things people who like this blog will enjoy. It’s a mini-series by a creator at the top of his game and you should either all go buy the issues on your digital platform of choice, or put in a pre-order for the trade out in August.

Back in 1989, the comic is also struggling with production issues as it continues to adjust to its new format. It terms of shifting around to find something that works, this Art Wetherell cover is the last to be split down the middle for two original stories. There will be one more in four weeks to promote the presence of Death’s Head in a reprint, but this is the last time the British and American stories will be given equal weight. 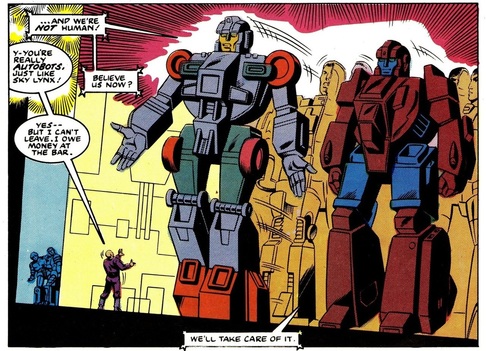 "You're really Autobots rather than giant humans! This crack cocaine isn't so hot after all"
Now That’s What Marvel UK Call the Mechannibals Part 4 isn’t nearly as much fun as last week, mainly because the story is already wound down and this is merely a bridging sequence to the slightly disconnected follow up story.

So our Pretender heroes decide to go rescue Berko before heading home, but because he hates robots they have to reveal themselves (no, not like that) to him. Berko’s slight awe at meeting Autobots again is actually endearing, but it’s a mistake as Hi-Test and Throttle have followed them and now know their secret as well.

The real highlight here are the Nebulons, cheesed off for being paid less after Sky Lynx escaped, they’re full of bitterness and snark, and become almost gleeful when they find out they can give Master Mouth a new lunch. Their revenge against the Autobots is made simpler by the fact they stupidly decide to pay off Berko’s bar bill at the cantina they already know hates robots. The Nebulons bribe the barman and history repeats itself with our heroes thrown out an airlock. Which is mild karma for their failure to help C3Pn0t. And just like the non-copyright infringing character they’re caught and provided to Master Mouth, who only gets two panels but remains a highlight as he prepares to chow down.

There’s not much here unfortunately, it clearly feels like treading water as Bob tries to think of something to fill the next issue and decides to turn this into a two parter even though there’s not really enough to it to justify it. Overall, only the third part worked in isolation and this is not a good sign of how well the American stories will survive in the new format. On the plus side the complete absence of Transformer robot modes means Delbo manages well, if not spectacularly as there’s little chance for showboating, on the art. 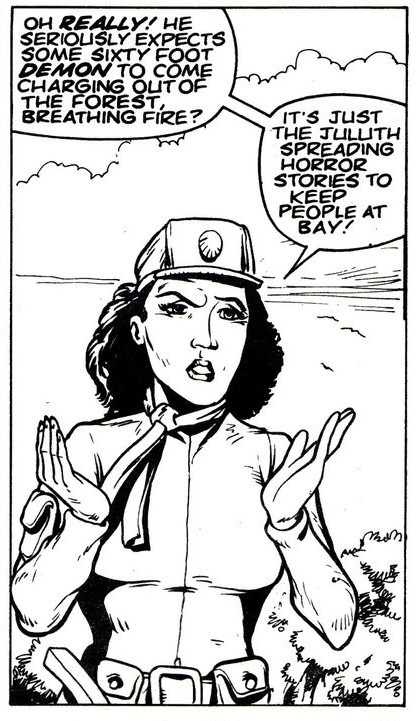 "Such things only happen in science fiction, and nothing in my life makes me think I'm in a science fiction story"
The second half of the first half (I hope you’re keeping track of all this) of Race With the Devil has an interesting detail in the recap that establishes something that actually wasn’t mentioned last week: Susan Hoffman is back! Yes the world’s unluckiest archaeologist is in Peru, at the exact place Dreawind and Darkwing have landed.

This is actually a character reuse that makes sense despite a “See Issue” box that goes back two years. Furman is riffing on a basic SF idea (one the various Star Trek’s did a lot) of our characters being mistaken for ancient God’s by primitive people, and as the Peruvian tribe seen here can’t speak English, having an archaeologist and thus reusing the one the author already has laying about makes sense. Unfortunately not a huge amount will be done with this as the story has a lot of groundwork for Furman’s American début to lay meaning the idea is only touched upon.

Still, as she looks for the temple of the 60 foot demon devil’s god Myaz, Susan does allow for a fun in-joke as her team are all visually based on The Real Ghostbusters (though oddly minus Winston, who is replaced by a generic white guy). It’s a nice touch from Wildman that pre-dates the sort of visual Easter eggs that will become standard in comics, and misogynists will be pleased to see they’re all men. As the panel with the best look at all four of them is a wide one, it's right at the bottom of this page.

As with the first strip though, the highlight remains the Decepticon Powermasters. Arriving on Earth they’re easily amused by the loincloth wearing locals and are about to lend them a “Big hand” by squashing them to death, only for them both to get zapped by a Mysterious Something. Hi-Test and Throttle leg it, causing all aspects of the plot to run into one another as the converge with Susan and the Autobots falling out of the sky. 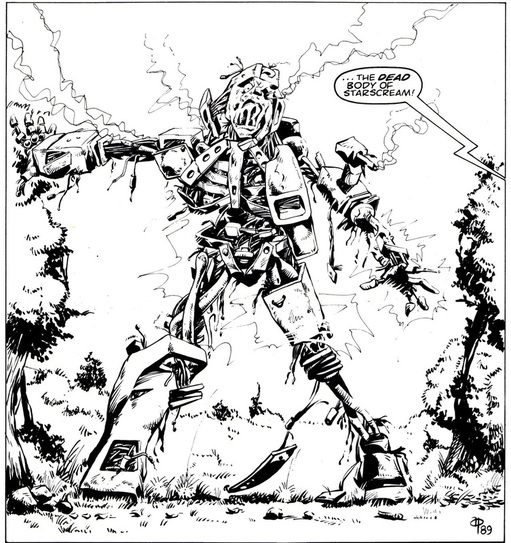 The Classics Pretender Starscream toy was not the best.
We get one nice bit of character development for Hi-Test as he wrestles with the decision to either ask the Autobots for help or blow their deal with the Mysterious Benefactor, but in the end he decides only the Triggerbots can save the day. Which, considering they seem to be amongst the rare Autobots who can fly in robot mode and survive atmospheric re-entry makes sense, they’re hardcore.

His spilling of the beans about what they’ve come to grab is fairly pointless though as the Autobots, Nebulons, archaeologist and Ghostbusters are immediately confronted by the goods. The 60 foot tall devil god that is the reanimated corpse of Starscream!

It’s something of a shame Starscream is brought back so soon, especially as we won’t be seeing the American story this sets up until much later in the year. Unlike the similarly quick UK resurrection of Shockwave it doesn’t feel like it adds that much to undo his explosion so quickly. Though of course, in this case there’s a new forthcoming toy to build up to.

This continues to be a solid, if not spectacular story with which to introduce the black and white, not helped by Susan, though having a solid story reason for being there, still not being the most exciting of characters. With the movement to Earth the deficiencies in the intended-for-colour art become more apparent with less black to hide them. There’s no suggestion of the exotic colour of South American adventure films that Furman seems to be aiming for, just lots of white empty space and sketchy art.

On the other hand, Wildman really throws himself into the full reveal of zombie Starscream creating a nice, gruesome image that nicely prefigures his work on the Megatron/Ratchet hybrid later in the series. 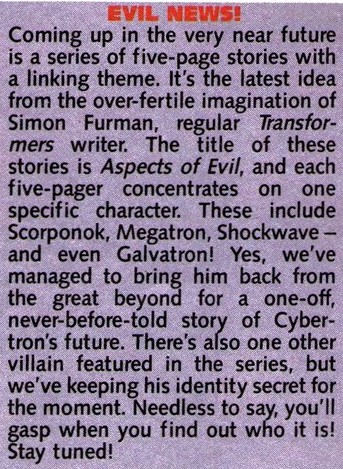 Though it was never going to be a one off return.
Having ignored a key issue last week, Transformation has to come clean and admit to something readers were bound to notice straight away.

Yes, they acknowledge that the Decepticon Powermasters are in both stories, and clarify that Race With the Devil takes place after Guess Who the Mechannibals are Having for Dinner (called by its full title, minus question mark, here). It’s good they’re on the ball about the issues readers might be happening.
Meanwhile, the sidebar is given over to promoting the first story that will be specifically written for black and white in Aspects of Evil, in particular emphasising the return of Galvatron.

Dread Tidings has some prime material for Dreadwind Fails to Answer Questions Properly! First, Dreadwind fails to answer a question from Anon (good name) of County Dublin about how Ironhide can be in issue 200 when he’s dead (presumably due to some confusion over his death in the film) properly. Dreadwind merely isn’t sure if Ironhide was even in issue 200.

Then he actually gives the right answers to Conor Farrington from Aberdeenshire, but in the wrong order. So he tells the hume to read issues 213 and 214 to find out who created the Transformers and 150 to find out what Megatron’s been up to.

Do you see what he did there?
Visionaries continues to showcase the special powers of the cast, first Arzon makes some wings from leaves and then Mortdredd gets to be a craven boot-licking coward by pretending to be hurt and calling for help to trick Leoric. Most notable are the pop culture references though, we’re asked if we’d believe a man can fly and even get the line “There’s more here than meets the eye! The ladder has transformed!”, as there was a similar gag in Inhumanoids it seems all failed Hasbro properties must quote that advertising tagline.

The Classic Covers Calendar reuses the Dave Gibbons piece from issue 133 for May, and Combat Colin invents the Combat Skates. Which have anchor based brakes that result in some delightful slapstick.

Next week, planet of the women! 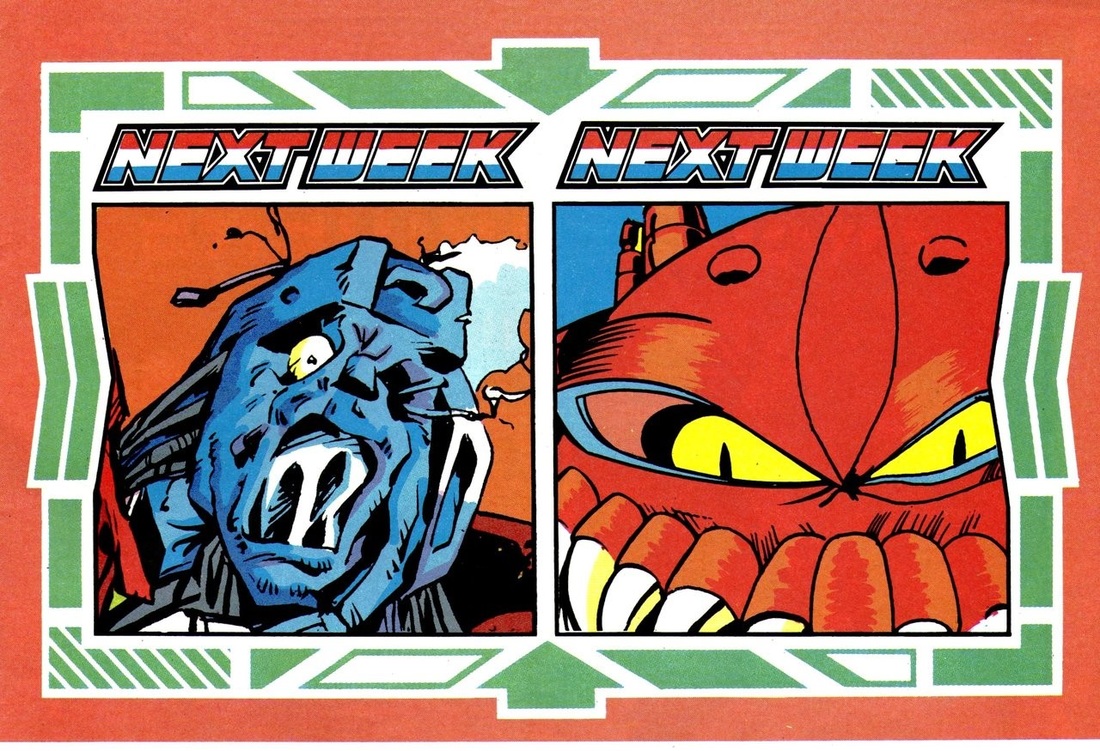