Feed Me Seymour, Feed Me All Night Long. 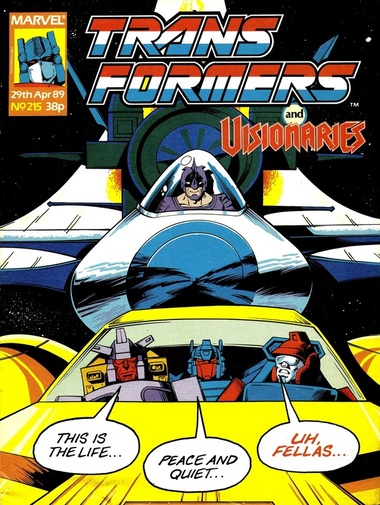 
Humph! I remember when we used to actually shoot Decepticons, not chat them up!


*The title is shortened to just The Mechannibals again.


Another week, another drastic and potentially damaging change in format that gets badly handled. This time it’s possibly the most damaging of all, the existing readership might have coped with the three strip format (even if it works against the flow of the American stories, but one of them being in black and white at a point just after a price rise and when the UK comics and magazine market were moving towards full colour generally this was probably the last straw for many readers, especially with how its handled as we’ll see. The cost cutting will stabilise things for the book to continue and it’s not as if there won’t be any new readers, but for those long time fans who were teetering on the point of being too old for thee franchise anyway, this would probably have been the final push away.

But before we get into the nitty gritty of how poorly this has been handled, the comic itself. One thing to note before diving into the contents is that this is the first cover in the new format to be entirely devoted to the one strip within, though with the prominence of Dreadwing it does at least try to include something featured in both stories, even if the Decepticons aren’t actually in the American strip this week.

(That bit was written on Thursday before I knew the result of the EU Referendum. Will this affect the rest of the piece?)

So like the inevitable collapse of the UK, let’s look at this comic split into three parts and decide which is Scotland.

That didn’t take long to seep in did it? 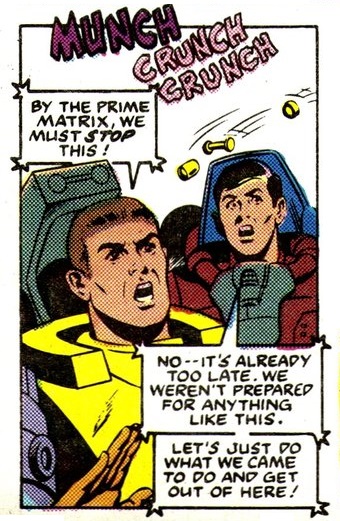 Nom Nom Nom.
The third part of what the lazy person who typesets the comic likes to call Mechannibals is actually the first to work in the new format, simply because it’s a nice simple self contained action scene that makes sense in isolation and even has what feels like an ending rather than a random stop.

Things start off in an amusing fashion as Cloudburst and Landmine attempt to be polite to Master Mouth, it’s basically a rerun of the Mr. Big Top gag from The Cosmic Carnival!, but it worked then and it works again here. The humour takes on a macabre turn though when Master Mouth wheels out his lunch... the C3Pn0t droid from the bar. His cheerful “Hi fellas” before being eaten alive in front on the startled Autobots is perfectly played, as is their shocked expressions as he’s eaten off-panel, with screws and bolts flying in their faces as the equivalent to blood and entrails. This isn’t the sort of comedy we’re used to from Budiansky, being far more in the British 2000AD vein than anything we’ve seen from him before. If these final issues are an unwanted contractual obligation on Uncle Bob’s part, this is where we get the advantage of that as he cuts loose and just writes the first mad thing that comes into his head.

The action scene is equally inspired and is the first—and possibly only—time the Pretender gimmick is used well, in this case for high farce. When Sky Lynx is wheeled in to be the main course, Landmine (I misread the last issue in my assumption only cloudburst stayed outside whilst sending his shell in) breaks in and stages a vigorous battle where the two Pretender shells keep “accidentally” getting in the way, culminating in him blasting the energon cubes to create a blinding flash that both allows Sky Lynx to escape and him to pop in his shell. Despite is being only just over two pages it might be Delbo’s best work to date and is hugely entertaining and actually has a proper SF concept at its heart with the treatment of the Pretender shells as avatars for our heroes.

We even get a nice pay-off as the issue ends with Cloudburst and Landmine getting the microchips they need (with a cheery “Thank you your mouthful”) and heading home. This would actually be the perfect end for this storyline. But it carries on next week...

Our well loved heroes.
We’ll dance round the big elephant in the room when it comes to this week’s British story when we get to the art, but the first thing to note about Race With the Devil (that’s the third British story in a row with no exclamation mark, have they fallen out of fashion?) is that just like the previous story it was written and drawn for the 11 page format, in this case for a two part story.

However, like the colour strip, this first half of what was supposed to be the opening is centred around a self contained action scene that works well in isolation. This sees Dreadwing (at this point when this occurs in relation to the American storyline they’re currently in is unclear, though it is firmly dated to 24th April 1989) chasing an Autobot shuttle around Earth’s moon.

In the shuttle are everyone’s favourite characters: The Triggerbots! Yes, after two attempts from Budiansky it’s Furman’s turn to try and make us care as we get what feels like another introduction story for them. Furman does succeed slightly better in giving them indervidual characters, even if he only really succeeds with Dogfight as a Kup style old grump.

The Decepticon side of things is more fun, with the merged Dreawind and Darkwing enjoying the distraction of chasing some Autobots whilst on a very dull mission for hire from a mysterious benefactor on Cybertron whilst their Nebulons are bored out of their minds in the cockpit. The idea of Decepticons who aren’t part of the war and just bumming about as freelancers is a fun one the post-war IDW comics have made great capital of, and allows for some good banter.

The Autobots are on a mission to find out who the Decepticons are on a mission for so they can’t kill their pursuers (much to Dogfight’s annoyance), meaning a well executed chase scene across the moon (with a repeated gag from Wrecking Havoc! of Dreadwind nearly crashing into a cliff whilst distracted) that like the colour story’s action scene manages to do a lot in a short amount of time. Also like the lead strip it ends with a massive blinding flash caused by an energon explosion being used as a distraction. In this case when a missile is magnetised so as to hit the shuttle’s energon supply, the boom blinds the Decepticons enough to let the Autobots abandon ship. Whether Furman was intentionally inspired by the Budiansky story is hard to tell in this instance, but it’s an unfortunate coincidence both run in the same issue. Still, the issue ends on a solid—albeit not spectacular as a cliffhanger—note with the Autobots ready to follow the Decepticons down to Earth. 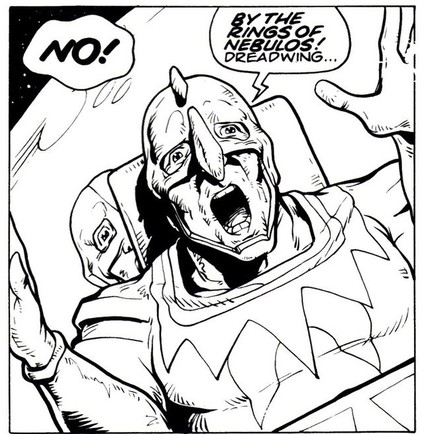 WHAT HAPPENED TO THE COLOUR?!
The big thing to note at least in passing here (as it won’t come into full play into later in the story) is that this is a fully fledged tie-in to Furman’s first American story. There will be more on this in the weeks to come, but for now we’re firmly into the era where he is pulling double duty.

The other thing to talk about is the art from Andy Wildman. Which as I’ve said before was drawn for colour. There’s a long and noble tradition of black and white British comics (though it’s one that was ending as the ‘80’s became the ‘90’s) and it’s a perfectly valid medium, but much like black and white cinematography it has its own visual rules that are different from colour and works best when intentionally created. Here it is very obvious that this is a story missing its colour rather than a story in black and white. Lots of white and minimal backgrounds (though a good chunk of it being set against the black backdrop of space helps hide that a bit) and just a general sense of an extra layer being missing.

I’ve also seen Wildman talk since about how he’s not happy with a lot of his British art in this period as he feels he was spreading himself too thinly (in his quarter century later memories because of his work on the American book, though there will be very little if any overlap there in reality) will poor and rushed work as a result. It’s not that bad here, but it’s certainly not at the same level as his previous work or the peak of his run with Baskerville on inks we’ll see on the American stories he draws.

Despite some of the flaws in presentation, this hangs together better than it has any right considering the circumstances and it’s something of a shame that the story itself isn’t what anyone would have been focused on at the time. 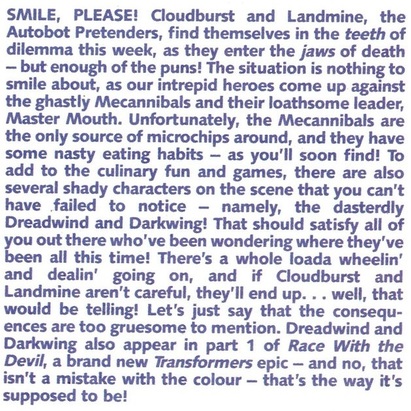 Focusing on the important things.
Ah yes. So after giving no advance warning, how does Transformation prepare readers for what will be a massive and drastic change? Well the sidebar promotes Death’s Head issue 6 and the arrival of Visionaries on television (though unhelpfully doesn’t tell you what channel or time, though this might explain the reprint). The main body of the text of course has no choice but to knuckle down and...

Gives an extensive recap of the Mechannibals story to date, including pointing out the Decepticon Powermasters were in the previous part so stop writing in to ask where they are. Race With the Devil then gets a sentence to itself that reads in full: “Dreadwind and Darkwing also appear in Part 1 of Race With the Devil, a brand new Transformers epic—and now, that isn’t a mistake with the colour—that’s the way it’s supposed to be!”

Yes, reassuring and preparing readers gets the back half of a sentence that only obliquely refers to what the change actually is. I can’t remember my own reaction at the time now, but I suspect a massive “WTF” from children who turned over from pages 9 to 10 with no advance warning. We’ll see from the letters page (which is absent this issue) in the following weeks. 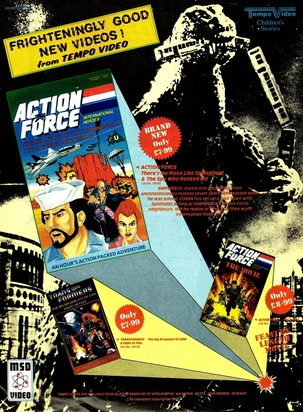 Godzilla approves of Action Force.
Visionaries follows a similar plot beat to The Flames of Boltax! as the knights fighting for this promise of ultimate power face different challenges that let the leads show off their special skills—such as Witter Quick successfully running quickly through a tunnel of spikes. It’s throwaway (and I suspect will be more repetitive as we go on), but an entertaining bit of fluff.

In place of Dread Tidings we get an AtoZ on Motormaster and Octane, whilst Combat Colin accidentally freezes Semi-Automatic Steve, but luckily is able to use him as a club to beat an attacking gang of thungs off. (“You’ve got your uses at times Steve!”).

And does anyone know why Godzilla is on the background of the current advert for Action Force and Transformers videos?

And in good news this week, James Roberts has announced on twitter that the solicitation for Classics UK Volume 6 is coming soon! Just in time to mean a heavy rewrite for the last few weeks in The Book 2 when the new behind the scenes info is avaliable.

Plus, don't forget your chance for being on a PODCAST 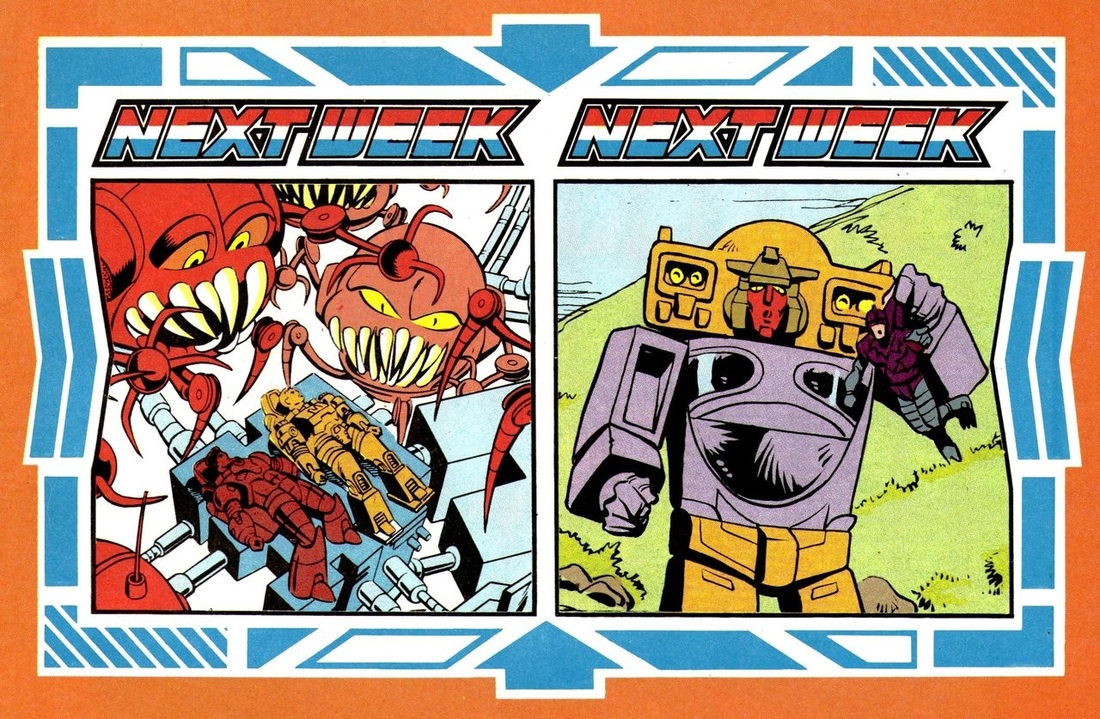