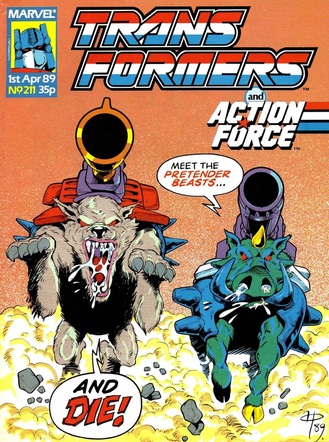 
...Which was when I decided that it’s OK to wear glasses. Lots of famous, respected people wear glasses—Franklin Roosevelt, Albert Einstein, Elton John...

Why thank you Cliff. It’s true only the best, sexiest people wear glasses, though modesty prevents me from naming the obvious name you’ve left off the list there.

However, you don’t need glasses to see that this is a story that buckles under the weight of its significance in the series as a whole. These two issues represent the last story printed under the format Ian Rimmer introduced as the book went weekly four and a half years ago of lead Transformers comic and a random backup (it will return, but only when the book goes fortnightly). It formally end the books imperial phase—though it has been on the wane for some time—and ensures every issue we get after #213 is something of a surprise. In a perfect world this would be a brainstorming big issue to mark the changing of the guard. Of the sort we had last week for example.

Unfortunately the perfect world Bob Budiansky is imagining is one where this issue was written by someone else. There actually are some end of an era aspects of the story that do at least give it a bit of gravitas, but for the most part it’s telling this is a story about a guy who has had enough of Transformers, keeps trying to run away from it but in the end can’t escape no matter how hard he tries. Where does Uncle Bob get his crazy ideas?

Dreaming about snakes? What would Freud say?
This does at least mean the issue gets to open with some memorable imagery as Spike Witwicky is having a nightmare where he’s being chased by evil machine tendrils though a Dali-meets-Tron landscape whilst a voice shouts out about how much Spike belongs to him. As with the surreal computer visuals of Pretender to the Throne! this is something Delbo clearly feels comfortable with and results in lots of fun bonkers stuff across the two dream sequences in this first half, my favourite being a cable Spike reaches out for turning into a snake.

This then gives us Something for the Ladies as Spike wakes up all sweaty in just his boxer shorts. Unsurprisingly he puts his bad dreams down to his recent experiences and decides it’s time to be shot of his one remaining link to the Autobots: His headmaster hat. Yes, it’s the début of the one and only story Spike is allowed to have for the rest of his tenure with Marvel: He’s chosen to move on and doesn’t want to be Fortress Maximus any more, but quickly learns that being a defender of the weak and innocent is his destiny. Until he forgets for the next time. The guy is a flaky douche.

Before all that though we get the main end of an era moment I mentioned earlier: The final appearance of Buster and Sparkplug Witwicky. The purpose of this of course is to show things have returned to normal after the recent turmoil in their lives, but it’s nice to see our original human protagonists happy, with Sparkplug even owning a new house (though there’s no mention of what his work is these days). It’s just a shame there’s no room for Jesse at the breakfast table.

This does show up one strange disconnect between the British and American stories though. The UK series generally takes the Judge Dredd “Events happen in real time” approach with careful effort taken to synch up the dates in the strip with reality. The American stories on the other hand happens according to the more usual “Comic Book Time” that allows Spider-Man to not be a pensioner in 2016. So even though we’ve had four in-fiction Christmases since Buster was introduced (and there’s no reason to assume there wasn’t one in 1984) to provide a handy guideline to the fact he should be at least in his early 20’s by now, Budiansky is still treating him as the young high-school teen we first met. This also factors into us later being told Spike has only missed one semester of collage rather than an entire year. Unless he managed to find the time for the odd frat party whilst playing giant robot? 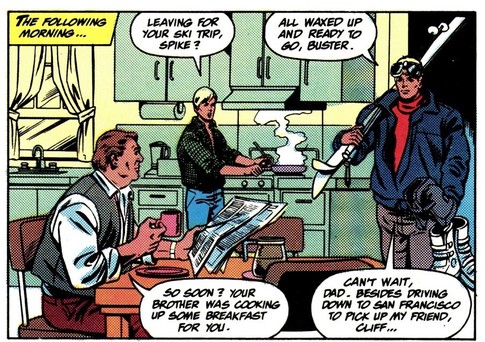 Farewell Sparkplug and Buster!
The other Witwicky’s are mainly there to hear exposition about Spike’s resignation from the Autobots, how this resulted in Maximus being put in a cupboard on the Ark (the same one Optimus used to keep the Dinobots in? Presumably there are no more spare Nebulons to take over) and Prime asking Spike to keep his helmet in case he ever needs to be a city sized robot again. In situations such as him not being able to get into a frat party.

The highlight here though is seeing that Seaspray survived the Unberbase. Meaning he is at least as tough as a Pretender. And probably a little more so.

With Spike deciding to ignore Prime’s wise words, he instead responsibly disposes of this advanced any mysterious alien technology by...driving to a scrap yard on his way to pick up his best pal Cliff for a skiing trip and throwing it on top of a junk pile. As you do.

This brings us to something we haven’t had in a very long time in a Budiansky story: The comic relief human in Spike’s skiing pal Cliff. A complete bore who can’t walk in a straight line, his main purpose in life is to stop Spike looking cool in front of pretty women at the resort. Interestingly the older Witwicky son likes a red head as well. Cliff isn’t a subtle character, but his lengthy speeches about his “exciting” life that send Spike to sleep are actually quite funny.

If a comedy sidekick wasn’t enough, we also get comedy tramps, who find Spike’s helmet and are thinking of turning it into a bowl when Snarler and Carnivac turn up. Sadly in rejection of all cliché neither tramp is carrying a bottle in a brown paper bag which they look at before pouring away.

The arrival of the Pretender beasts is moderately interesting as Carnivac has of course already been a featured player in the UK series. Now with shell, he may come across as slightly more thuggish than he did in Time Wars, but his going from team leader to Snarler’s sidekick will actually be made to fit into the British stories quite well, and presumably Furman had some sort of assurance that Catilla would not be appearing as an Autobot before he had the chance to carry out his own plot-line. It would be interesting to know if the absence of his shell in his prior appearance was a deliberate choice or if the UK team was simply provided with incomplete reference material. 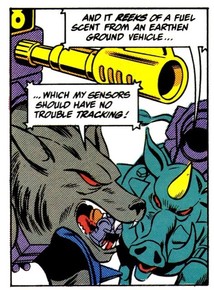 Snarler gives me the horn.
The two Decepticons are under orders from Scorponok to kill Spike—that Underbase induced change of heart has yet to kick in—and use his scent from the helmet to follow his car to the mountains. The cliffhanger created from splitting an American issue in half for the last time in a long time is pleasingly quite nice, as Spike and Cliff start skiing own a slope without knowing the Beasts are waiting at the bottom...

It’s certainly not a curb-stomping issue, but this is much better than I remembered it to be despite Bob’s heart clearly not being in it any more. But the comedy is sweet, the Decepticons are fun and it has a melancholy feeling added to it by knowing this is the end for most of the Witwicky family. Throw in art that plays to Delbo’s strengths more than usual and it’s not bad, if not exactly great.

The big thing about this issue though is the revelation on Transformation that the format is going to change to a three strip structure in two weeks. This may be down to low sales, but there’s a deliberate attempt to try and make it sound like an exciting shift as readers will be getting two Transformers stories a week. It very carefully doesn’t mention the comic will be becoming partly black and white (which would have been known at this point, the only reason the first two issues in the new format are still full colour is because the work had already been paid for), nor that the brief return of Visionaries won’t be a new adventure but a simple reprint of their first story. For the third time Marvel UK have done it. We’ll see how well this goes down over the next few months. Amidst all this the lead strip itself barely gets a mention. 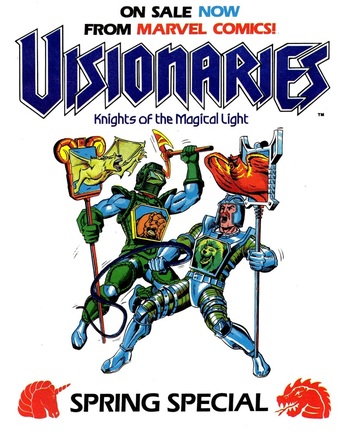 Inhumanoids never got this many chances.
This is also the first issue where it becomes clear that Euan Peters’ (credited as editor again) take on Dreadwind and the letters page will not be as effective as Furman’s. Michael Gutteridge from Peterborough asks Hi-Test (who is pitifully glad to have a specific letter) when we’ll be seeing Buzzsaw again. Rather than simply going “You’ll have seen him in action last week and he’s now sadly dead” the reply is “Who knows?!”. Expect a lot more of this. The awesome name of reader Gianpaolo Sbuttoni should be mentioned in passing as well.

In order to have it finish in time for the format change next week, we only get a tiny chunk of Action Force and no Cobra Commander sadly. Mainframe turns out to be an effective soldier after all. What a twist.

With enough time since the publication of Universe having passed, AtoZ returns due to popular demand. The entry on Metroplex not only adds a first UK appearance, it actually is careful to note the first time we saw Autobot City itself in Ark Duty.

Combat Colin reveals that the Crusher Tank was being driven by...Gladys Blemish! Who was a love interest for Colin way back in his Action Force days. Now that’s continuity. Turns out she had a crush on him.

As well as an advert for a trade of the William Tell comic (the ongoing series previously mentioned will now not be happening) there’s a full page promotion for a Visionaries Summer Special. Guess what it will be reprinting? Someone at Marvel must have paid over the odds for that licence.

Next week, Spike skies off a Cliff. 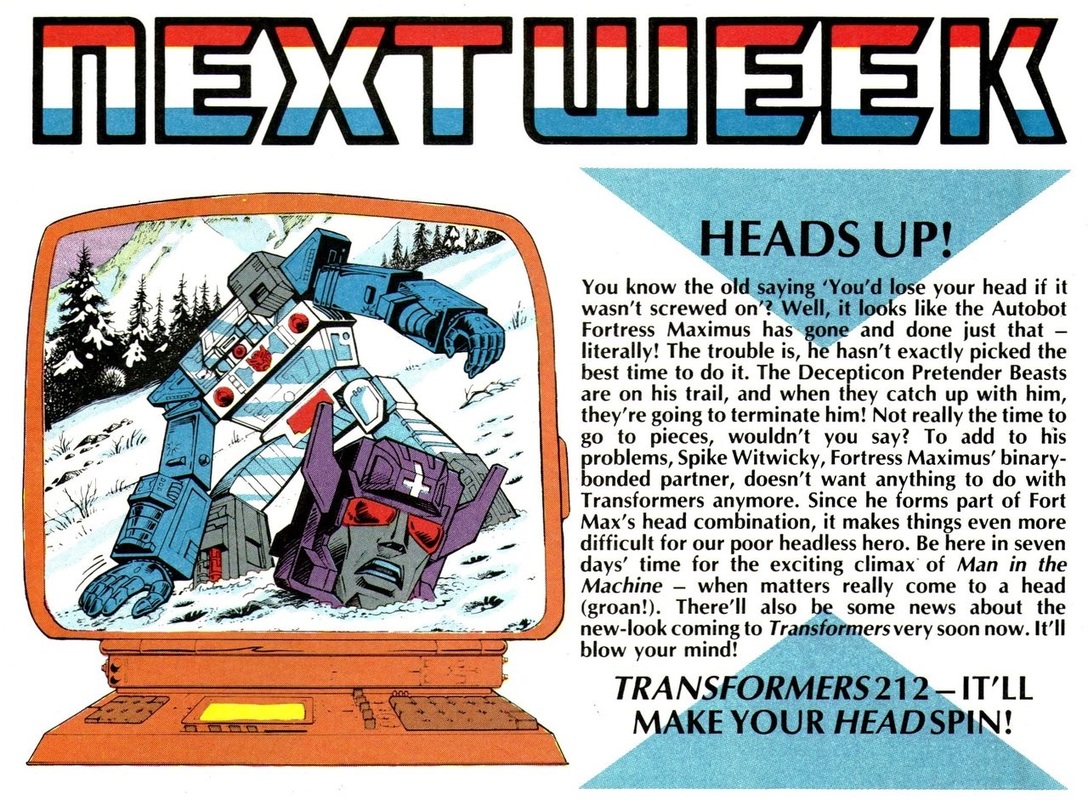