And in the End Should Someone Die? 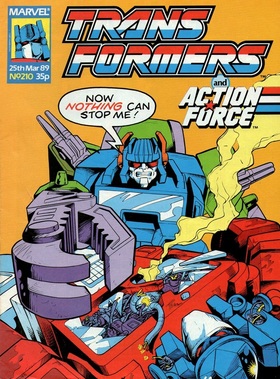 
Your efforts go for nought Soundwave, for I can destroy the Terrorcons just as easily when I fall!


Happy birthday to us! Yesterday Transformation was four years old, and if you look at the BLOG you’ll find a thank you video.

Back in 1989 Starscream is kicking off his own celebration as he arrives in Buenos Aires. Unlike Tokyo, Delbo actually puts some effort in with the local landmarks, but being his home town probably resulted in him not needing to research the Avenda Nueve de Julio in any great depth.

Despite the change in locale, things continue pretty much as before. First a group of Decepticons (Octane, Astrotrain, Blitzwing, Buzzsaw and Laserbeak) charge him and get zapped to death. Then the Technobots charge him and get zapped to death. Then the Terrorcons charge him and—in a twist—Starscream has to zap them whilst upside down because Soundwave has shot him and knocked him off his perch. It’s not quite enough to generate any interest though. Slightly more memorable though is Soundwave himself being killed as he’s pretty much the only 1984 Decepticon to have made it through the entire book to date. Though as he’ll be almost immediately resurrected when Furman takes over the American series this is often overlooked. 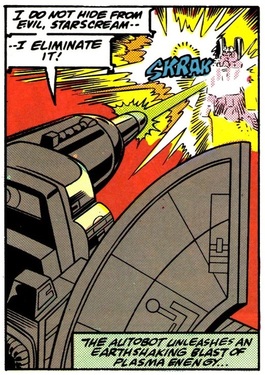 This is of course deliberate as these two characters have history, the fact Starscream remembers the events of Command Performances! and this personal connection adds some fire to his long delayed revenge that is sorely lacking from the other deaths.

In one of the more curious twists in this story Fortress Maximus is then used as a patsy by his own brother. Buster calls him as Starscream is about to make the killing blow (Headmasters seem to be not as impervious to the Underbase effect than Pretenders, which makes sense as they have less organic content), making sure to mention that Optimus Prime is with him and leaving the line open long enough for Starscream to trace its origin. Sportingly Starscream then doesn’t simply kill Maximus (an act that would have taken seconds) and instead flies off to see what that sneaky Optimus Prime is up to. 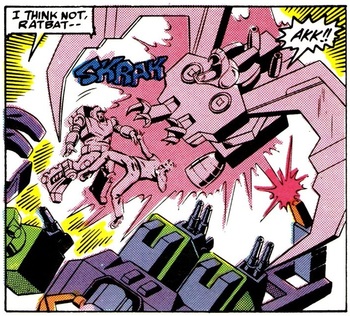 Nooooooooooooooooo!
Despite the best efforts of the Transformation page I doubt anyone reading thought Prime had cracked and become a coward, nor that he was after the power of the Underbase as Scorponok and Ratbat believe. The tension therefore comes from exactly what he’s doing launching a mirrored probe at the Underbase, and whether the two Decepticon leaders boarding of the Ark (they sneaked past the early warning systems in an Autobot shuttle. Will they ever learn?) and taking of Buster and HiQ hostage will ruin his plan to stop Starscream.

Unfortunately for Ratbat, he’s undone when he sees the satellite has deflected the Underbase and sent it back towards Earth. Suddenly power-mad he starts gloating about how it will soon be his...and is shot in the back by Scorponok in an exchange that’s worryingly prescient of the “Time to face destiny!”/“Time to face gravity!” exchange from Die Another Day (in this case “I go now to meet my destiny!”/“You go to meet your manufacturer instead!”). 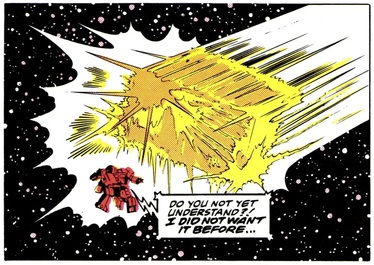 Sadly super powers are not forthcoming.
Ratbat has been far and away the most consistent thing about the Budiansky stories of the last two years, being a running joke that actually works whilst at the same time managing to be an effective leader rather than just a punchline. There hasn’t been a moment without him that hasn’t been entertaining and it’s fitting that it’s giving in to the same power lustre that every other Decepticon leader suffers from that finally undoes him. The art here is also a highlight. He will be missed.
A moments silence.

Without HiQ (who—along with Buster—was being held by Ratbat as he died and they were first caught in a laser blast and then dropped on the floor) Optimus doesn’t have the energy to fight Scorponok and is shot down as well. Which feels like a deliberate commentary on the silliness of the Powermaster idea from Uncle Bob.

As Scorponok leaves the Ark to face his own destiny, Buster recovers and nearly breaks his fist trying to wake up HiQ by slapping his steel helmeted face. We’ll just ignore the fact he just survived a fall that should have broken every bone in his body. Still, with his battery back in, Optimus is able to go out and face Scorponok.

He's a big boy.
In keeping with how their relationship will develop, this first proper meeting between the two sees Scorponok learn he has badly underestimated the nobility of Optimus. Prime blasts the two of them out of the way of the Underbase (and comes across as very annoyed his word is still being ignored) and Scorponok is shocked he seems to have set it on a collision course with Earth...

But he hasn’t. As part of Prime’s convoluted plan he has tricked Starscream with the earlier message to come here at this exact moment and take on the entire Underbase. This is where Delbo really excels as the giant, mutated glowing Starscream is a terrible sight to behold. But then, as is always the case in stories like this, it turns out he’s taken on too much and promptly explodes. As Prime intended all along.

This is somewhat dicey, if Optimus wanted to let Starscream overload why was he the one to stop him taking on all that power by shooting him out of the way in the first place? A lot of people have died as a result of that sharp firing. His plot also depended on Starscream managing to overpower Fort Max so he could observe the radio message, which seems a cruel assumption. All in all it was a massive gambit and it’s lucky it paid off.

It’s also worth noting that Optimus and Scorponok are both within the light of the Underbase for about the same time as Starscream was originally. Whilst on the surface it might seem to be unimportant, this might explain some of the drastic changes both characters will undergo as the series continues (Lord Zarak will come to be the dominate personality within Scorponok when that previously wasn’t the case and Optimus will start merging with HiQ, something that he assumes to be the end result of the Powermaster process but which doesn’t seem to affect any of the others), the energy might have some very strange properties.

The issue ends with Scorponok having a new respect for Optimus we will see develop, whilst Prime is very keen to point out all the new toys survived. They agree to collect their dead jointly (take that ReGeneration One, which assumed the Decepticons were collected by the Autobots and shoved in the Ark), but in exactly the same ending as Time Wars once this is done things will go back to normal. What a strange coincidence, though to be fair the dialogue wasn’t completely rehashed into the earlier story by Furman as I remembered it to be. 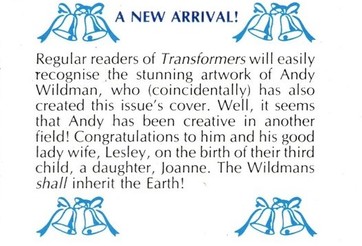 Actually a very cool touch.
Dark Star would be a much better story without the thing for which it is best known: The deaths. These get far too samey and are mostly executed poorly (tellingly Delbo only real shows any passion when drawing anything other than characters exploding). With less of these this the strong scenes between Scorponok, Ratbat and Optimus would all combine to make it a classic. As it is, the end is still strong enough for it to be a very solid conclusion to the Underbase Saga, and it would have been a fine exit point for Budiansky.

Transformation has an exciting announcement to make, though not about a forthcoming story or the launching of a new comic. Instead congratulations are offered to Andy Wildman on the birth of his third child (the man really is prolific in every sense) Joanne. Awwwww. That baby is 27 now. 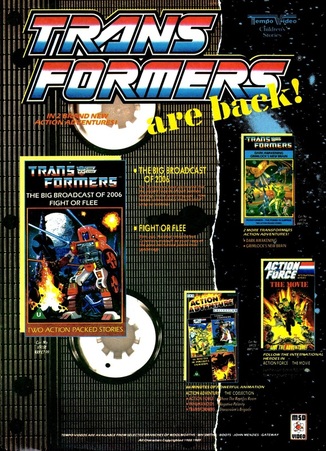 A new run of videos.
On the letters page, Ian Rimmer writes in to point out that the comic is indeed for all ages as he is 17. He also shows readers at the time were not unaware of the logic holes in Time Wars as he asks about Ironhide not remembering Target: 2006 and why Kup, Blurr and (perhaps oddly as his 1989 self isn’t on Earth) Ultra Magnus aren’t running into themselves. Hi-Test takes the answers despite the letter not being addressed to him—the gimmick really isn’t taking off—and makes an almost convincing argument for Ironhide being carried away in the heat of moment but can’t do more than bluster on the second question.

Action Force only has two of its five pages devoted to the delightfully bonkers Cobra Commander plot this week—he tries on his new suit and Billy wakes up but with no memory—meaning it’s not as fun as we focus on the dull “Boy soldier learns the technical guy is important” plot with Dusty and Mainframe infiltrating a Terror-Drome.

Combat Colin uses a blast of treacle syrup to take down the Crusher Tank... but who is the mystery villain inside? Find out next week!

Also find out next week what happens when you’re a writer expecting to leave a book who has wrapped up all your storylines who suddenly turns out to still be in a job. 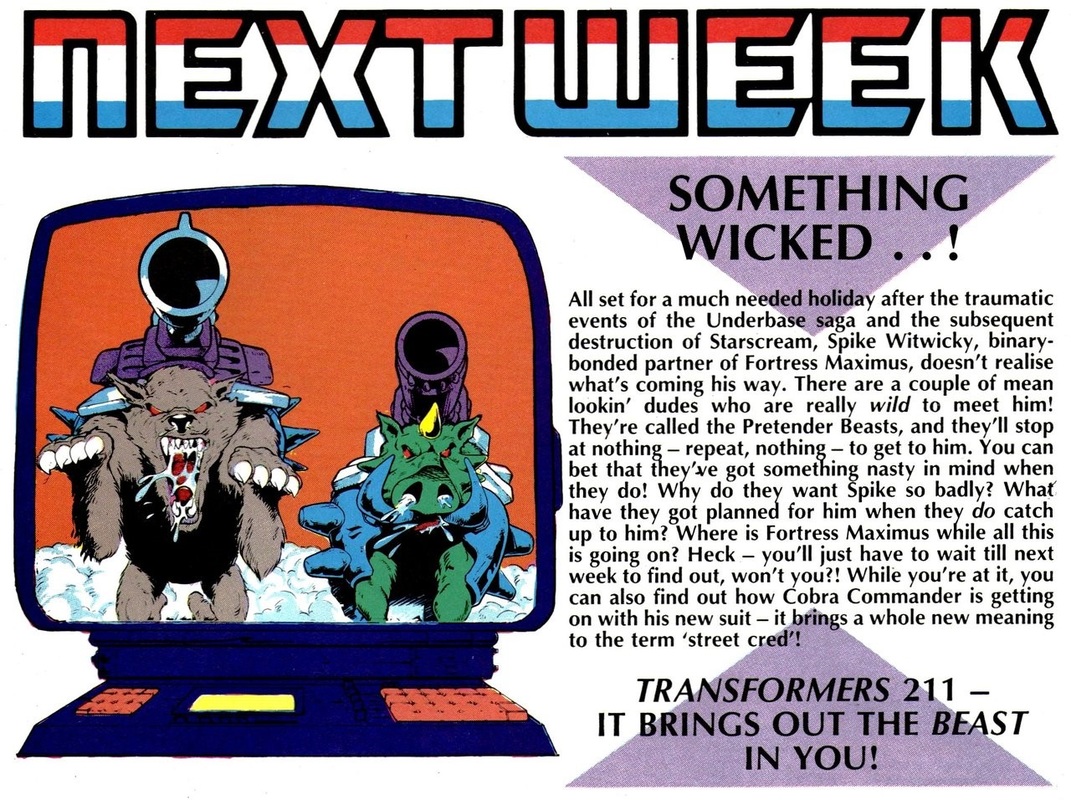