Yes It's True, I am Happy to be Stuck With You. 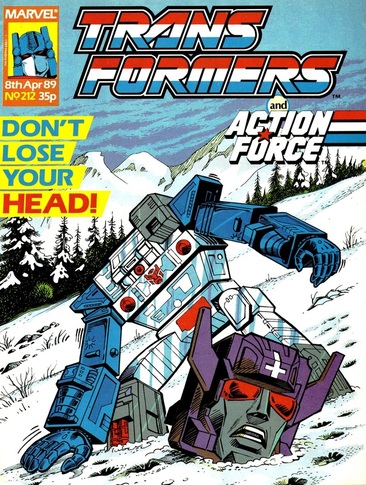 Ulp! This wasn’t on the trail guide!

As I noted last week, this a story that’s a bit too slight to bear the brunt of what the issue stands for in terms of the book’s shifting format. Certainly it’s almost impossible to look back on now without your focus being entirely on the promise (or threat!) of what is coming in seven days time. So before we get into all that, let’s actually give the most important part of any comic (the comic, if you’re struggling) a fair shake of the stick.

Things open with a cross piste chase as Spike and Cliff are surprised by giant monsters suddenly appearing and trying to kill them. It’s a bit cheesy that two humans on skis are able to dodge and dive around advanced energy weapons, but the fact we get the return of the Comedy Bystander Reaction with the quote I used above after what feels like a very long absence is actually rather wonderful. Carnivac’s solution to which human to kill when they’re not sure which is their target (“We’ll just rip ‘em both to shreds!”) is also amusing, even if him confidently calling Snarler an idiot suggests a different working relationship between the two than later UK stories will create.

Speaking of disparities with the British material, later in the issue Carnivac says they’ve come over the space bridge from Cybertron whilst Survivors will clarify he’s been stranded on Earth since Time Wars ended. This is another sign of the new editorial regime as this dialogue would have been changed under either Furman or Rimmer. 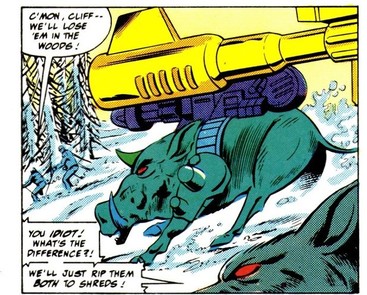 Their friendship will never be this warm again.
Amusingly for an issue that’s largely about how he and Fort Max are a team, much of this story is about how Spike is pretty capable by himself, here knowing the Decepticons are following their scent and so distracting them by throwing some of their clothes off a cliff (rather than Cliff) so as to give them time to try and hide. It’s over a camp-fire (which might seem a tactical error, but they’d otherwise freeze to death) we get one of two scenes in the issue where Cliff provides useful help which stops him being an annoying dead-weight.

Spike tells him his past and his dreams and even though Cliff doesn’t quite understand (it seems the Transformers war is still only an occasional news story) he knows enough pop psychology to point out it’s really himself that Spike is running away from, which makes Witwicky attempt a trance so as to see the vision through.

This time, rather than fleeing, Spike accepts the fall and comes face to face with Fortress Maximus, who is now a wise old Jedi telling Spike to look inside himself to find the truth about how they are both really one. This works and allows Spike to bring Max’s body in for help, which shows us how much security has been improve on the Ark since two Decepticon leaders boarded her a fortnight ago as he simply walks out of his cupboard and into space without anyone noticing. 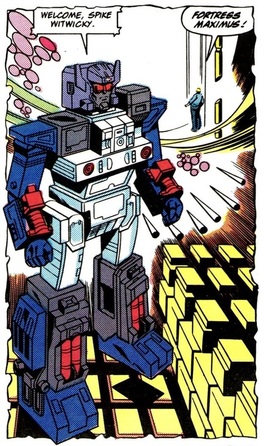 "Welcome to my cupboard"
This then brings us into the big action scene of the issue as it’s Pretender Beasts Vs a Headless Fortress Maximus (who gets a very cool moment catching the two humans as they ski off a cliff. Not to be confused with Cliff), with the added jeopardy of a collapsing ski lift the Autobot has to hold up thrown in.

In order to be a truly effective fighting force, Spike needs his helmet and this is the second area Cliff (not to be confused with a cliff) comes into his own as he manages to pull of a surprising to the point it’s lampshaded later move that allows him to grab the magic hat and return it to his owner. Leading to a strong scene of Maximus chewing bubble gum and kicking ass (“If you want my attention Decepticons, you’ve got it!”) and chasing the ‘Cons off. Leading to a comedy final as Spike—having sent Maximus back to his cupboard—faces another long drive home with Cliff.

Again, this was a much stronger issue than I remembered it to be, and may actually feature Delbo’s most consistent Transformers (as opposed to the humans he can usually manage quite well) related work, the final battle is certainly his most effective action scene to date and the need to grab the ski lift even excuses the usual leaning back pose. As a coda to both the Underbase and to Spike’s story (despite seemingly accepting his fate here, this is clearly intended to be his final appearance as he makes way for PM Prime and it will be a long time and a change in author before we see him again) it makes for a solid, if perhaps not especially epic, end to this era. 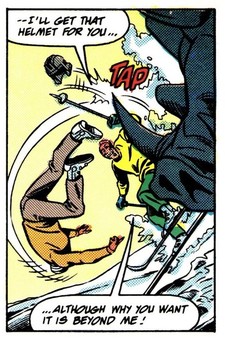 Grabbing Spike's helmet from Snarler's horn. So many jokes...
It’s also the last Budiansky story to really have a chance of working as far as UK readers will be concerned. Splitting issues in half has worked surprisingly well, but dividing them into smaller chunks is going to completely ruin their pacing and momentum.

Considering it was only mentioned for the first time last week, Transformation is oddly passive aggressive about readers who don’t know what’s coming (“You know what that is don’t you? NO?! See me after class!”) and oddly encourages readers to look at page 23 for more details when the Next Week page has almost no text on it’s three large images, speaking of which, apparently the Special mentioned last week was a reprint of one of the later issues rather than the first again. But putting that out before Transformers represents the opening makes no sense either.

The sidebar attempts to go into slightly more detail—promising the return of Action Force and more AtoZ. Though it’s also far too vague about other new features (amusingly I’m writing this the same week IDW have mishandled the press release of the Hasbro Shared Universe by being similarly vague about how it affects the existing books and their creative teams) and, again, there’s no mention of the really big change that will be coming in three weeks. More cheerfully, the other sidebar welcomes back John Stokes after a lengthy absence with a new cover, with a tagline nodding at Carry On Don't Lose Your Head of course. 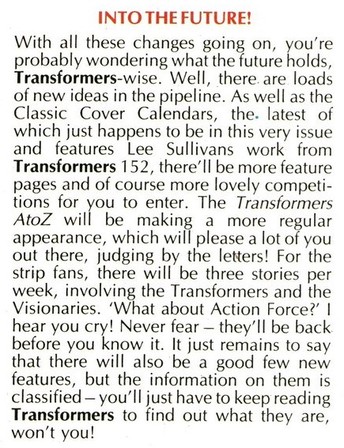 Into the future of near cancellation!
This month the Classic Cover Calendar (which again you have to destroy the lead strip to remove) actually manages to come out at the start of the month, and is a rather nice Lee Sullivan piece from issue 152. Dreadwind meanwhile continues to show he seems to have stopped reading the comic he’s in as Leo Comerford from County Kildare asks when Omega Supreme will be seen again. As with Buzzsaw last week, the reply isn’t just “He was in the last story and is dead now” but a vague shrug.

Dreadwind does at least seem to have gotten as far as Time Wars, and is able to suggest to Simon Marham from Welwyn that the reason the Wreckers die in Time Wars but appear in Peace is because they were either rebuilt or Galvatron’s actions have changed history.

Action Force ends for now on a slightly mixed message as the story about how Mainframe is a useful soldier despite being a tech guy is undone by Hama emphasising he’s also a regular old soldier and has all those tricks as well.

There’s no Combat Colin this week due to the full size Next Week page, meaning we end on the ominous note of the promise of Big Changes. How well will this play out?

For the 20th anniversary of TFArchive the Podcast I’m involved with is doing a special listeners contribution episode, it’d be great if as many people as possible could join in, the details are HERE in this handy video. 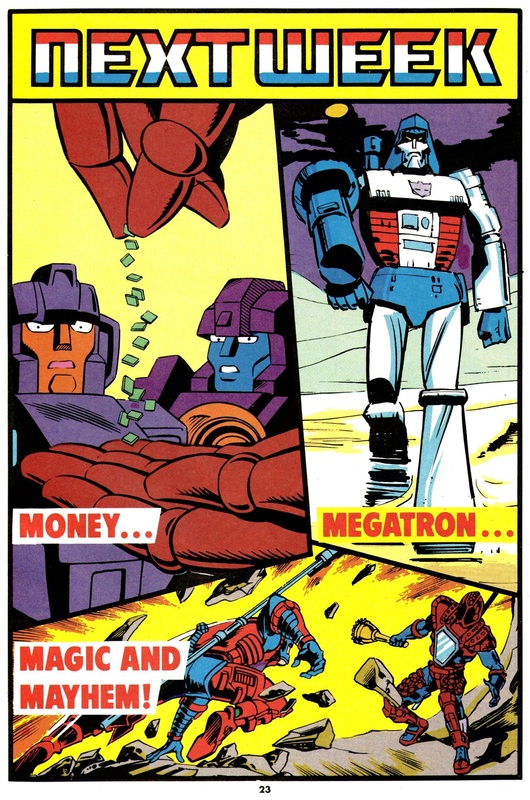