The Past May be in Tatters, but Today is all That Matters. 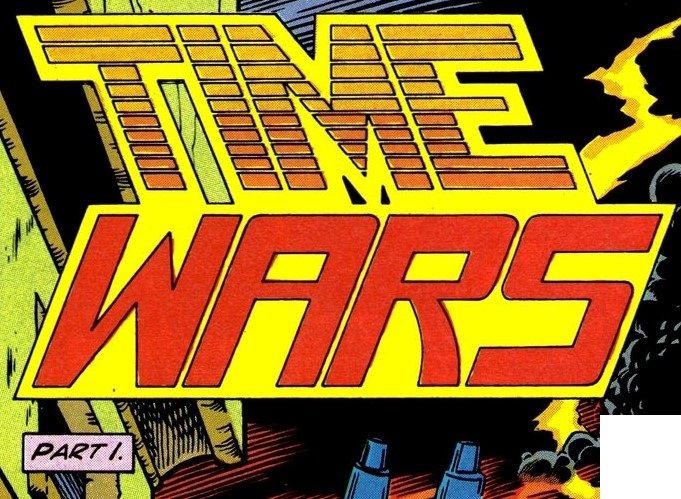 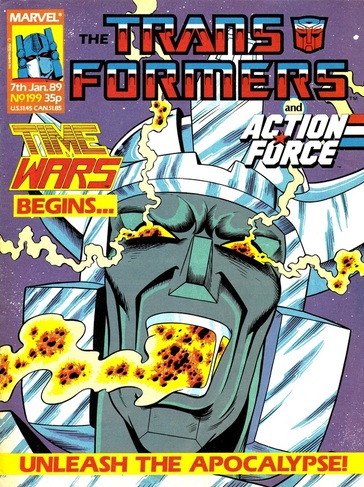 As I suggested when talking about All in the Minds! in the Annual, my memory from rereading Time Wars (the title of which has a logo in font that can only be called "So '80's") as an adult is of a story with lots of individual great moments let down by an overall plot that just doesn’t hold together. There’s going to be a lot of frustration over the next seven weeks, a lot of “This bit is lovely, but...”, probably enough for you to start a drinking game.

But, if there’s one advantage to doing this project on a week by week basis, it’s that it is easier to focus on the individual moments of a story rather than the whole and in this context (which is of course how it would have been read at the time) this opening part really does feel special. The comic has been keen to emphasise that this is the big finale of the Galvatron story for some weeks now, and the story begins with a suitable apocalyptic feel.

In keeping for the wrap up of a storyline that’s run for more than two years, the opening page is given over entirely to a recap. Though it technically does little more than touch on the key points (including our first instance in-strip of the flaw I mentioned where its been forgotten that Cyclonus died 18 years before his creation, not twenty), Furman gives the narration a stark darkness than makes it feel so much more satisfying than it really should be as he asks us to “Imagine” these events. It also gives us the new information that the space/time rift that destroyed Quintesson has now grown and surrounded Cybertron. It’s a neat page, though it is odd that on the last panel showing the “Autobot scientists” on Cybertron Wildman has drawn a Junkion and Sharkticon that colourist Euan Peters has tried desperately to disguise. No wonder they're struggling to solve the problem.

The ten pages that follow effectively attempt to follow the pattern of last year’s Legacy of Unicron! by kicking off with a New Year’s day set Bondian pre-credits sequence, with the lead plot only really kicking into gear right at the very end. That worked there because what followed was tight and focused but... well, more on that shortly. 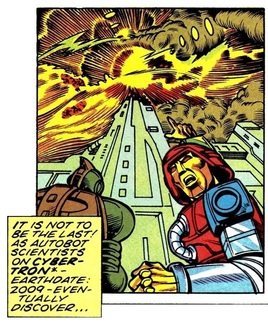 To be fair, having learnt to shave makes him the most sophisticated Junkion of all time.
The opening splash page (though between that and the recap there’s really only nine pages of story here) is quite glorious, showing Sinnertwin and Rippersnapper doing their best Godzilla impressions in an American town as the time storm rages around them, with panicked humans (and a copy of Dragon’s Claws) fleeing in terror before them. The narration continuing the purple prose tone of the recap page (“The sky churns and boils with unearthly energy!”) actually add to the feeling of the end of the world as well.

Many of the clichés of end of the world fiction are present and correct and Furman is clearly having great fun with them. We get a man with a sandwich board (bearing the Hitchhikers “Don’t Panic” catchphrase), a father comforting his terrified son and a street preacher proclaiming demons raised from the pits of hades. Which Rippersnapper rather likes the sound of.

This entire scene is given over to the Terrorcons (with Blot and Cutthroat joining them) just cutting lose and having fun. Whilst it’s extremely enjoyable, the fact it ends with Hun-Grr turning up and telling them off for wasting time on irrelevances is something that sets alarm bells ringing. The sequence also ends with an odd bit of set up for future stories that never gets picked up on as Hun-Grr turns the humans against the Autobots by claiming the reason they haven’t come to help is because they were in league with the Decepticons all along.

We then cut to a storm lashed Autobot City, which has been put back together pretty well post Quintesson attack, as has Blaster. Though why Furman has bothered to resurrect the communications officer is a bit of a mystery as he delivers one line of dialogue before vanishing from the rest of the story. The purpose of this scene is to give more set up exposition, but with the threat of the Terrocons being used to give it a dramatic bite. 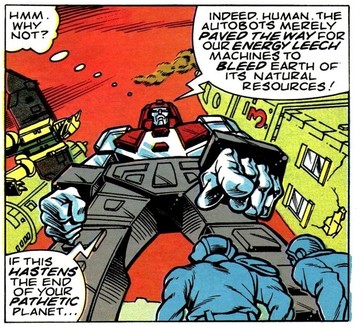 I'm sure this drastic change in future Autobot/human relations will be followed up on.
An angry Kup arrives with Spike and Daniel (this is by far and away the happiest fate for Marvel Spike. As Wildman is using the character models from the film, Euan Peters attempts to make their matching clothes less creepy by colouring Spike’s in red) to ask why the hell Rodimus isn’t doing anything about the Decepticon’s Earth destroying energy leech when Arcee has sent them all the information they need to track it down.

Prime patiently explains his dilemma: Scientists on Cybertron have worked out the time storm is the result of events in 1989, almost certainly Galvatron related. They have a limited amount of time to use the time machine or they’ll have to wait a month (a contrivance for the sake of this scene as the need for “Dimensional vectors to come into alignment” has never been mentioned before), taking the time to save the Earth could lead to all of reality being destroyed. But if they save reality, Earth could still wind up being destroyed. Spike’s pure rage at this point is fantastic, and means it very much feels like a Marvel Witwicky despite the cartoon influence on his look.

The Decepticons meanwhile have set up their energy leech in a quarry like some sort of Doctor Who villains. The treatment of Arcee here is much, much better than in Space Pirates!, she’s worried about the absence of her backup but remains calm and efficient and perfectly prepared to take on six Decepticons herself. She doesn’t have to though as Rodimus has agreed with Spike, and Kup’s determination to take care of this and be back in time no matter what is nicely played. As is Soundwave’s frustration at the Terrorcons running about like headless chickens as the leech is destroyed. 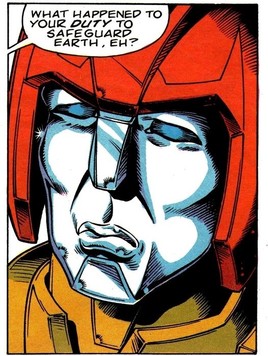 "Also, what happened to your face?"
Soundwave’s leadership has always been a highlight of the comic whenever we get to see it, and the issue closes with him at his best. Arriving at Autobot City to find it abandoned (as we’ll discover Blaster didn’t go back in time he must have gone on holiday) but with an active time portal we get an interesting insight into the plate spinning any Decepticon leader needs to do to stay in power. From his perspective the sensible thing to do is strip the City of useful equipment and rebuild the leech. But the Terrorcons are pissed and regard their need to save face as more important than destroying the world, and he knows this is the sort of thing that has usurped some of his predecessors. So back into the past they go.

There is as I noted in my opening, a lot of good stuff here and in and of itself it would be fair to say this is a very good issue. But (and start the drinking game now)... This entire issue bar two pages of the Autobots deciding to go back in time could have been dropped entirely. The standalone Bond opening action scene only works if its not at the expense of what follows, and there are going to be so many dropped balls and fumbled plot points over the next six weeks (as another sign of the issues to come, Ultra Magnus is present in 2009 but reduced to taking orders from Kup) that the space used here is desperately needed to make what follows work. It’s especially annoying that after closing on a great Soundwave moment, the future Decepticons are going to contribute exactly nothing to the rest of the story. As 11 pages it’s hard to find fault, as the first 11 of 76 it starts things off on a wrong footing the story will never quite recover from. 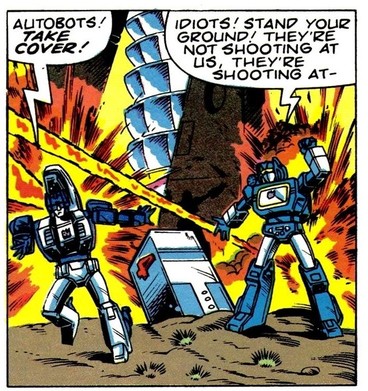 Rippersnapper hated it when his interpretative dance was interrupted by an attack.
On art, the Wildman/Baskerville collaboration continues to develop well, with lots of nice memorable imagery and great facial expressions. Ironically for an artist who will later come to decide the Marvel series was really about him, the only place Wildman struggles is with Rodimus Prime’s face, which just looks sad rather than thoughtful or conflicted.  It’s telling though that the (presumably Furman written) Transformation page formally introduces Wildman as a major new part of the team, clearly he has already made a impression on the author.

Speaking of Transformation (which for some reason uses a Lee Sullivan drawing of Rodimus Prime—from later in the story?—alongside the Kup and Arcee images from the actual issue), it’s all very much about the size and importance of this story. Knowing what’s to come though it’s hard to take the bold claim “Forget the saying “Oh, they won’t kill can’t kill HIM”, we can and we will!” seriously, I don’t think anyone at home will be going “They won’t kill Roadbuster, of that I’m sure. Nor this bunch of Decepticons we’ve not seen before and don’t seem to be saying anything”.

One of the sidebars is also given over to explaining the new Action Force story. The most famous issue of G.I. Joe (and probably the one that means it gets taken more seriously as a “Proper” comic than Transformers) is of course the original dialogue-less Silent Interlude from issue 21. This was ground-breaking and has been much copied since, including twice by the original Joe comic itself. Despite the fact the original is both a few years old now and was reprinted by the weekly Action Force, this is clearly seen as enough of a novelty still for some space to be given over to explaining that the printing of Hush Job from the second Yearbook hasn’t been messed up and is supposed to be mute. 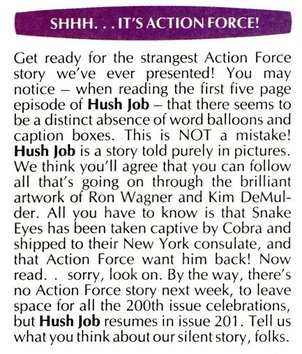 "Shhh, we don't like Action Force either"
The story itself does rather suffer from being required to be broken up, these silent issues work best in one solid hit rather than over weeks. However, Ron Wagner’s art is up to the task of carrying the narrative and the simple opening of Scarlett confirming Snake Eyes is being held at the Cobra Consulate in New York and going to Storm Shadow for help is straightforward but effective.

On the letters page, Dreadwind is asked a load of questions by David Lawes of Cromer after claiming the Decepticon isn’t very good at answering questions. Unsurprisingly this snub sees all his queries ignored. Simon Phillips from Gosport has more luck asking Hi-Test about the comfort of his Powermaster armour. It turns out the Nebulon would prefer something in pin-stripe double knit.

Combat Colin is moved from the back page to make room for a larger Next Week box, and sees Colin and Steve using the Combat Tank to take on the most terrible of threats...the January sales. Which I’ve a feeling is basically a recycled Robo-Capers idea.

The aforementioned full page advert for the next issue is also our first sight of the new Transformers logo, but that’s not all we’ve got to look forward to next week. Three Autobots and a giant 200 are going to jump out of Optimus Prime’s stomach as well. Join me in a week for what may well be the most self indulgent thing I’ve ever written (if I can pull it off) as well hit issue 200. Plus an Addendum on Eugenesis! 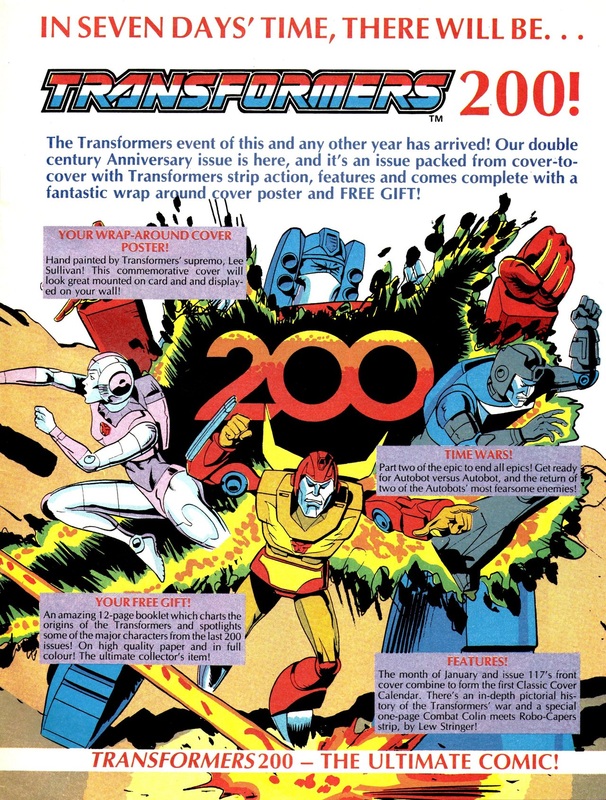