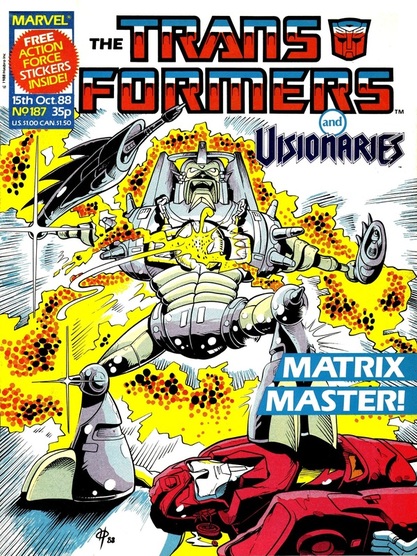 
There’s something very strange and new about this issue. It’s nothing to do with the contents, but the very paper itself. I’m no expert, but it’s no longer “glossy” as the comic has been previously but instead feels more like newspaper stock. I don’t know if this was simply an across the board move Marvel UK made at this time or if it’s the first overt sign of the comic’s falling sales, but the net result is the book suddenly feels cheaper and nastier. The pages also don’t age as well as the previous stock either, being more faded and slightly yellowed in my copy.

More cheerfully though, once you get past this we get one of the all time great sequences of the comic. It says a lot for the faith Furman had in Lee Sullivan at this point that he basically gives the first three pages over to letting the artist grandstand. Metroplex’s rampage against the Quintesson troops is fantastically realised, perfectly conveying both the scale and just how pissed off the roused giant really is at the indignities heaped upon him. Whether swatting aside trident ships or doing the world’s biggest face palm on ground soldiers it’s a lovingly crafted sequence of violence.

It’s here one of the problems of the previous parts of the story is neatly dealt with as well. Exposition has not been handled especially well thus far, but rather than giving a character an unwieldy and space consuming speech Furman instead limits it to narration boxes across the Metroplex attack. This means the story so far information is there for new readers who need it, but those of us who are up to date can just ignore it and revel in the destruction. All without anyone having to repeat things they already know to one another.

Sullivan also does a fine job on Ghyrik’s agog face as he looks upon a city sized monster flattening his army. 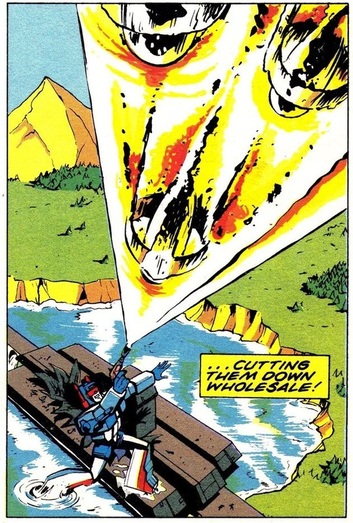 BURN.
For all the visceral thrill offered by the opening, the real meat of the issue comes from the scenes set on Cybertron. Not the battle there—we re-join it as it ends—but the aftermath. Ultra Magnus, always so pragmatic and sensible (and of course, though it’s been twenty years for him, this is the second time we’ve seen him fight alongside the Decepticons in successive British “Epics”) offers both thanks and an olive branch to the equally pragmatic and sensible Soundwave. These are (at this stage anyway, the rivalry-becomes respect-becomes friendship idea is one Furman will play out to even greater success in the American book) the only two leaders of either side it is possible to imagine having this conversation. If anyone could take this joint venture and turn it into a more lasting peace, it is them.

And the painful beauty of this scene is that Soundwave almost meets Magnus halfway. Before shaking his head (in a pose Sullivan apparently based on a panel from The Killing Joke) and declares it would never work because too much has happened between their races. This leaves Scattershot of all characters to point out the truth in this and that they will never resolve this war peacefully, with Magnus agreeing this is the real tragedy of the situation.

This is by a considerable margin the most mature piece of writing Furman has yet produced for the comic, tinged with both regret and some genuine feeling anger at the stupidity of these pointless hatreds that never end. As with the previous part, covering this at the same time the British government seems determined to repeat the mistakes of previous ones and help to keep the cycle of hate going in the Middle East this feels more relevant than ever. Perhaps human nature means it will never become irrelevant.

From that sequence, mature in ideas and execution, we cut to what may well be the silliest and most childish sequence Furman has ever written. This is nothing if not a story that goes up and down in quality more rapidly than a yoyo held by an epileptic. 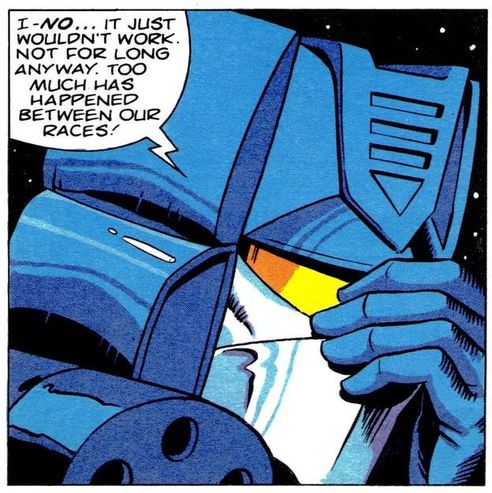 "Ventriloquism? Really?"
Back at Autobot City, Ghyrik decides the only hope he has for victory is to use the Matrix to give himself super powers. As, up to this point, there’s been no indication the Matrix can or would physically alter anyone who wasn’t chosen (and probably just did it for Hot Rod as a one-off) we pretty much have to accept that Furman has indeed seen and been inspired by the TV episode The Burden Hardest to Bear as Ghyrik’s “Robot on Steroids” transformation is near-identical to Scourge’s there.

Whilst this isn’t a bad idea in and of itself, the execution is riddled with flaws. First up, in reverse order of painfulness: Hot Rod is inspired to fight back and reclaim the Matrix by the thought of how it chose him and therefore there must be something special about him. This despite the fact he’s currently being curb stomped by someone that shows the Matrix will give special powers to anyone who touches it. At the very least the logical thought is that Ghyrik is special as well. This effectively kills any idea of Hot Rod being a “Chosen One”.

Second: My continued bugbear of Arcee. She comes up to the roof of the ruins of the city and sees Ghyrik about to shoot Hot Rod in the head. She’s armed and could quite easily kill him from behind with no fuss and bother, saving both the day and her boyfriend. Considering the fall of Autobot City was presented as being her fault allowing her to be the key player in resolving the crisis would be just standard storytelling, and might have helped to redeem the appallingly sexist treatment of her across the entire story.

Instead she just decides to watch. Because she thinks Hot Rod needs to prove his worthiness as leader. This is a bit cheeky as presumably he’s going to let her off for dereliction of duty back at the start of this entire mess. Of course, the real reason for her just standing there is that she is just The Girl One and it’s down to the manly men (and after I poked fun at the cover of issue 183 I should say it’s Hot Rod’s turn to be threatened with the phallus gun) to sort things out. 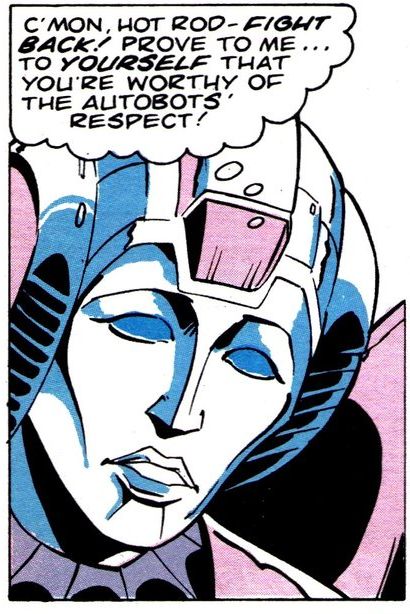 I can’t quite believe I’m about to type this.

Ghyrik, who up to this point has been a fairly credible villain, is defeated by ventriloquism. Hot Rod throws his voice, briefly confusing the Quintesson (it’s lucky the voice wasn’t thrown in the direction of Arcee else Ghyrik wouldn’t have been surprised by the lack of a speaker) and letting Hot Rod—to use a technical fighting term—twat him. It’s presented as brain over brawn and the proof Arcee was looking for of Hot Rod’s worthiness. Instead it feels like something that’s escaped from ChuckleVision, and as Hot Rod actually points out it’s an easy trick for a robot to pull it’s hard to credit him with much in the way of special talent.

You could try and see something significant and interesting in the way the reborn Rodimus casually murders Ghyrik in a rather brutal “throwing him off the roof” way despite being defeated and no longer a threat, but coming off the back of an insanely daft moment like that it’s hard to muster the enthusiasm.

This just leaves the mopping up, Wreck-Gar broadcasts the contents of the canister, turning the galaxy against the Quintessons; Quintesson itself is destroyed by the cosmic storm and we get the one and only tie-in to the ongoing time travel arc in the entire epic as we are ominously warned the planet’s doom was really the result of a growing rift in time and space, and by the time the Autobots realise it will be too late...

The Metroplex and Soundwave moments alone are enough to make this a much better issue than one containing the ventriloquism sequence has any right to be. But that rather sums up the whole of Space Pirates!, some fine individual moments but crippled by very poor plotting and horrific sexism. The net result has been the weakest “UK Epic” since the volcano story over a year ago. It certainly does not bode well for the forthcoming grand finale. 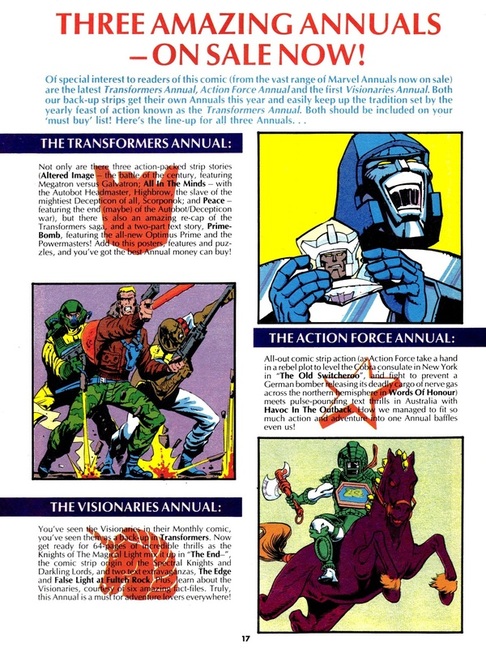 Gotta milk that Visionaries licence.
Transformation is excited by both the extra set of Action Force stickers to go with last week’s free gift and the crop of UK Annuals that are now out, including such big hitters as The Real Ghostbusters, Marvel Super Heroes and...erm...Captain Power. Three of the books--Visionaries (reprinting the first American issue), Action Force (with two Larry Hama Joe stories) and Transformers (all in good time)—get a joint full page advert later in the comic.

Also getting a full page advert is Doctor Who Magazine, with the latest in the series of one-page promotional comics. Unlike the previous ones it makes no pretence of being a “straight” comic and is instead a comedy piece that looks as if it’s drawn by Lew Stringer and sees the Seventh Doctor distracted by a copy as he flees from all his most famous monsters before it turns out it actually belongs to the Imperial Daleks who only wanted it back. It’s good fun and the different approach must have worked as Doctor Who Magazine is—along with The Real Ghostbusters—one of only two of the titles to have been promoted in the book in this way not to head towards a quick cancellation (there’s also a full page advert to promote the fact Galaxy Rangers has merged with Thundercats. This talks about the book being on sale from September, suggesting a lack of enthusiasm in running it)

Speaking of books heading towards a quick cancellation, Dreadwind (still dealing with Grimlock’s mail) uses questions from Richard Potter of Cheltenham and Jamie Baker of Rous as an excuse to reveal that—after guest staring in Dragon’s Claws issue 5—Death’s Head will be getting his own comic in November. That’s close to a year after he left Transformers, and shows how tortuous the path to getting there has been. 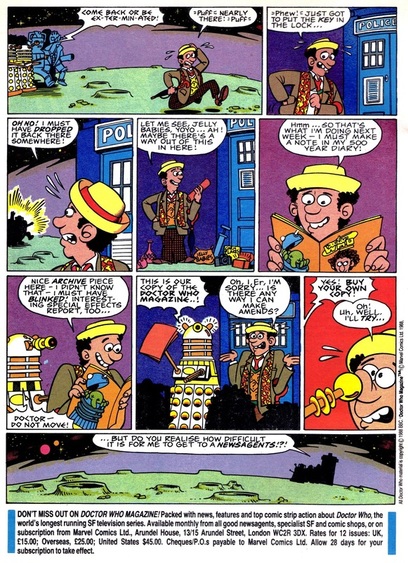 Less self indulgent that this year's TV final.
Speaking of books that long ago passed their quick cancellation, Visionaries begins the second part of the four talismans epic with Wings. Arzon and Feryl follow their spirit guide into the mountains like a band on the run, but Cindarr and Virulina are spies like us and spot their arrival and decide to live and let die by creating an avalanche which destroys the heroes’ chariot, leading to Arzon flying off in bird mode and being caught in a net...err... the mull of Kintyre?

Combat Colin manages to be eerily topical for the week I’m writing this as his home town is flooded. In this case though it’s the result of an evil fiend who has also kidnapped Semi-Automatic Steve. The real joy here though is Steve’s landlord, visibly based on Les Dawson in drag.

One final and potentially important thing to note is that around the time this goes off-sale is—according to Bob Budiansky—the moment the British and American Transformers writers meet for lunch and the later offers the former his job (without any actual authority to do so, he’s just desperate to get out, this was alongside the publication of Cold War! in the states so in writing terms Bob was likely close to the end of his tenure already). Furman effectively has his foot in the door of an American comic and that’s something that will have a noticeable effect in the New Year when we reach roughly the point he’d have been writing. Things are on the brink of changing for the book on multiple levels.

Though it’s unconnected to any of the above the feel of change coming starts next week with our first non-Christmas non-Furman British story in nearly three years. 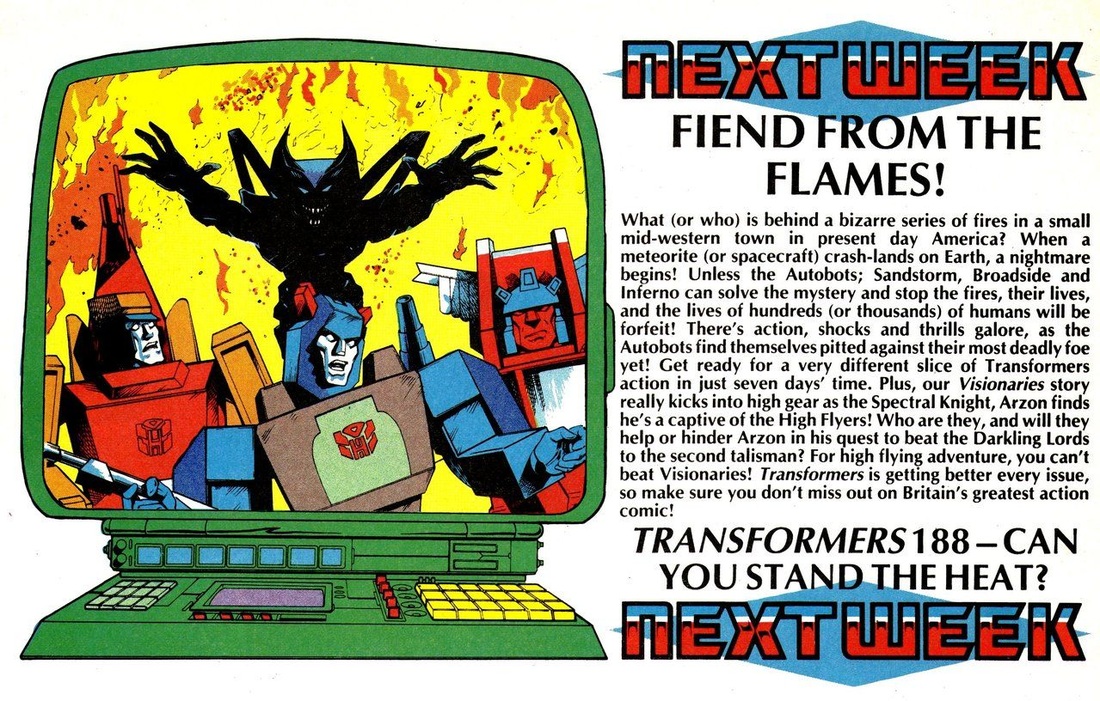