It’s Been a Long Hot Summer and it’s 95 Degrees in the Shade. 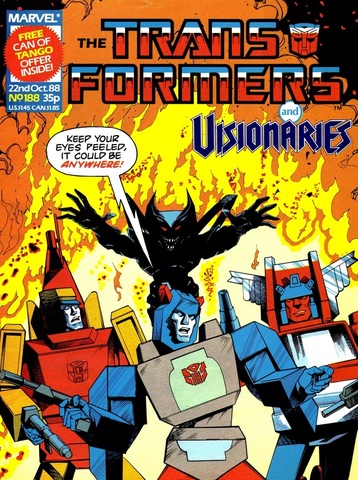 But if Xaaron asks, you were certain you saw Galvatron there, OK?

In one of those strange little coincidences the lead in story to Space Pirates! was written by a fill-in author for Bob Budiansky, and now we come out of it on the other side with a similar fill-in issue on Furman’s behalf. Whatever else you might say about Space Pirates!, you cannot claim it’s not well balanced.

The reason for Furman not writing either this or next week’s issue is likely fairly straightforward. Though we’ve not quite reached the launch of Death’s Head he is writing three comics concurrently. Though he is a prolific author it would only take a problem with one of the books he’s working on to require him to take a couple of weeks off in order to refocus. This may have been down to the somewhat awkward origin of Space Pirates! itself, or the fact that Dragon’s Claws is now at the halfway point of its short run (and in terms of lead in time Marvel would likely have been aware of how well at least the first issue had done by the time Furman was finishing the last epic) and there may have been some serious rethinking going on behind the scenes to try and save it.

Or alternately it’s as simple as Furman just wanting a break and deciding to use his editorial prerogative and let someone else have a go. This is likely one of those questions the long awaited sixth Classics UK (coming Spring 2016!) will give a full but no doubt dull in comparison to fevered speculation answer.

Whatever the reason, we effectively get the prose equivalent of having Bryan Hitch do a couple of issues on art as a Dan Abnett takes the reins. Though at 28 he was around a decade older than Hitch this was still amongst his first professional comic work and would begin a path that would lead to various big league American comics and some ridiculously high selling Warhammer novels. As with Hitch, Furman clearly has a good eye for spotting and helping to develop raw talent and Abnett’s association with the book should be a significant one fans shout about from the roof. 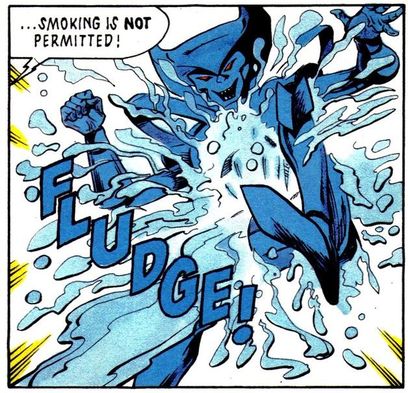 Inferno saves the day with a massive ejaculation.
Sadly, with one notable exception next week, Abnett’s association with Marvel Transformers (including some Annual stories) are all rather low key and mediocre. It could be assumed that his passion was not in fill-in issues for a silly kids’ book, if not for the fact that when IDW gave him carte blanche with the Heart of Darkness miniseries (alongside fellow collaborator Andy Lanning) the result was batshit insane and mediocre. This is, if nothing else, an impressive thing to achieve.

Firebug! claims to have a plot by Furman, but whilst his fingerprints are all over the second half of this Abnett duology the plot here is so slight and generic as to leave you to suspect it was rather flimsy and mainly focused on requiring Abnett to introduce the Autobot reconnaissance force (Broadside, Inferno and Sandstorm), sent by Xaaron from Cybertron to keep an eye on Galvatron that will play a more significant role in the new year. If I were a betting man I would place money on the credit simply being the result of this and the next issue being commissioned together and Furman providing a brief for both at the same time rather than because of any substantial plotting.

This is all a roundabout way of saying there’s not a huge amount to talk about with Firebug!, it’s effectively the sort of comic that you’d imagine every British story would have been had Furman not become involved in the comic: Filler just marking time between  American stories.

The plot basically belongs to the Trouble With Tribbles (or even Kremzeek) genre of a small funny creature running rings around our Very Serious heroes. Though being Transformers the titular Firebug presumably also kills a lot of innocent people with its pyromaniac antics before the Autobots arrive on the scene. The idea of a creature that loves heat and fire coming from the planet Furnacia is a bit groan inducing, but it’s well designed by Jeff Anderson to look both devilish and cute and the sequence of the Autobots chasing it around a small town with comically inept results are at least mildly amusing. 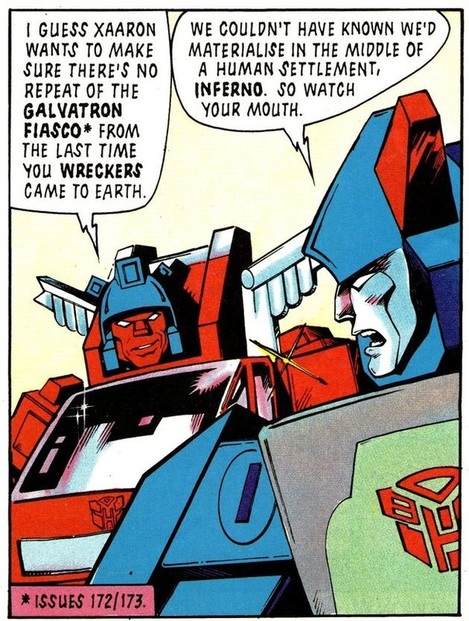 BURN
The best part of the issue is before this though, and considering the continuity references to Xaaron and Galvatron is likely where Furman’s involvement shows itself the most. The recon team’s frustration at just being sent to watch Galvatron and trying to find excuses to get involved in anything to pass the time is rather sweet. You get the feeling that if a Firebug hadn’t shown up they’d have been running in jaywalkers.

It’s also nice to see Sandstorm and Broadside step outside of their more famous triple changing colleagues shadow, especially Broadside who gets to be in charge and vent his frustration at having to make the decisions before giving a wry smile and deciding to go help Sandstorm with the town fire he’s discovered on the agreement that they all pretend they saw Galvatron there if Xaaron chews them out.

Though it’s not on the same level—or indeed on the same level as his future death at the start of the year—Inferno getting to show off his fireman knowledge when talking about the Firebug and to also come up with the solution of sending it to Mercury is a nice thing to see for a character who is normally a background guy across most media.

But other than that, this may well be the most inconsequential issue of the comic to date, with only some of the comedy black and white stories later in the run coming close, and of course each of those is half the length. Even Uncle Bob’s silliest and most insane story feels less generic kids tie-in comic than this does.

In terms of art, Jeff Anderson rises to the writing to provide some of his flatter work. The Firebug itself is fun—as if the final panel of it juggling fireballs on Mercury—and there’s some nice baffled facial expressions, but otherwise this is not his best work.

All of which makes the shift in both quality and tone the same author and writer are about to give us all the more jarring. 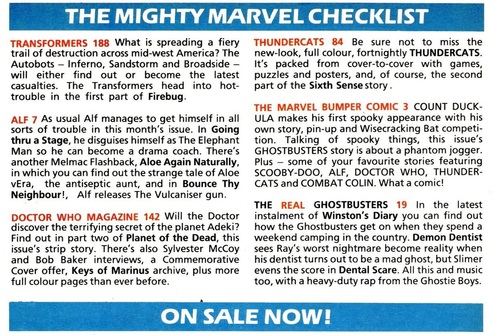 What is shocking though is what may well be the worst free gift the comic ever did: A coupon for a can of Tango. Be still my beating heart. Worst of all though, in my copy the coupon has been cut out making it impossible to read Dread Tidings! Thankfully the friend who scanned the comic for me was able to splice together a complete version (based on the quality from the scans that were on Transforce), meaning I do at least get to read the whole page. Which is lucky as it’s an interesting one.

The UK comic’s position on acknowledging its American parent has always gone back and forth, but this issue sees the floodgates open and it be fully discussed. And all it takes is Robert Leather from Lincoln writing it to point out the “Classic” Freaky Friday knockoff Vice Versa sees the amazingly named Judge Reinhold reading an issue of the comic. This forces Dreadwind to admit (after making Hi-Test go see the film) that it is actually an issue of the American comic! Shock horror.

More impressive than that though, American Bob Newbell of Warren MI writes in to say how much better in every single way the British comic is than the American one with its “Bad artwork and stupid plots”. Dreadwind’s claim that the American comic isn’t all bad because they “See fit” to reprint their stories feels less than convincing. 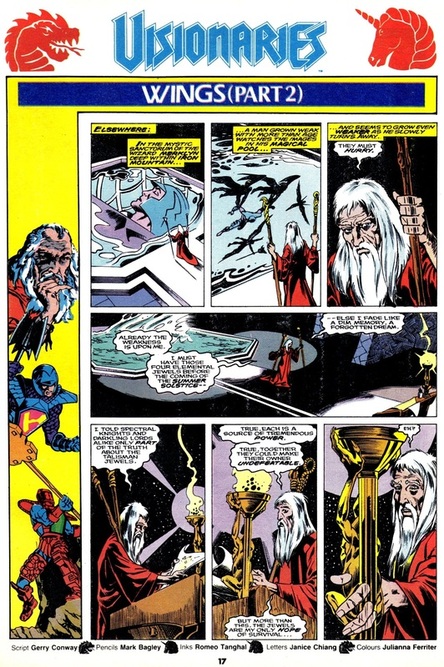 Visionaries recap border... though they've forgotten to put the recap in!
Visionaries shows someone is a fan of both Flash Gordon and half naked women as it turns out Arzon was captured by what can only be described as “Brian Blessed’s Vultan if he had tits”. Which is something Brian Blessed would no doubt approve of. Merklyn being a bit poorly can’t compete with that.

As I write this a Visionaries film has just been announced as part of Hasbro’s new cinematic Universe. Though it will almost certainly never happen, this could be Tom Selleck’s big chance to play the role he was born for in Leoric.

Combat Colin has an odd instalment that feels like something fell through as Colin narrates a recap of the end of last week, but with new information about the fact he already knew Aunty Arctic was behind both the flooding and the kidnapping. The final gag of Steve’s landlady insisting on coming with Colin to rescue Steve because of outstanding rent is rather wonderful though.

This is also the first issue with the Mighty Marvel Checklist, a half page guide to everything out on sale that week with brief paragraph descriptions of the contents of each comic. It’s a small thing, but it’s a smart advertising move and was always surprisingly fun to read as a kid as it gave me an insight into the wider Marvel world that I couldn’t afford to keep up with.

It’s not been the most cheerful couple of months here on the blog, with a lot of criticism and bemoaning of some of the poorer issues we’ve seen this year. Luckily, next week’s Christmas Day (yes, I am working Christmas Day, I like to think of myself as an essential service) entry is going to talk about one of my all time favourite issues. Don’t lose your head.

And don’t forget your chance to win prizes in the 2016 Christmas Quiz! 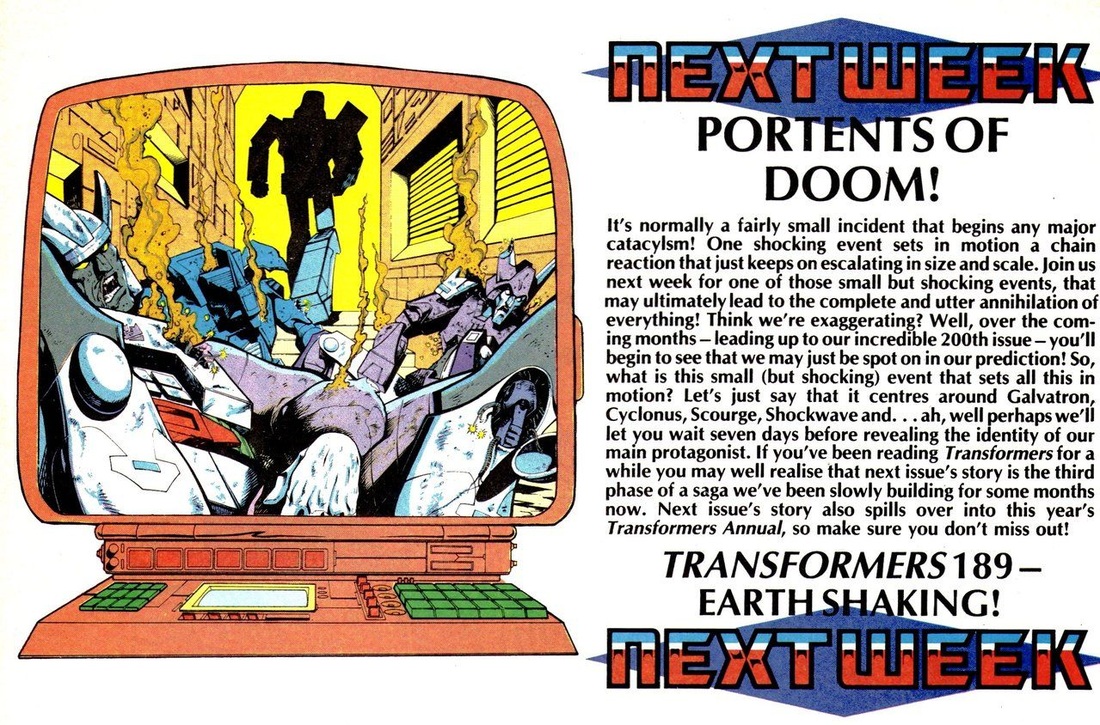