We're Caught in a Trap, There's No Way Out. 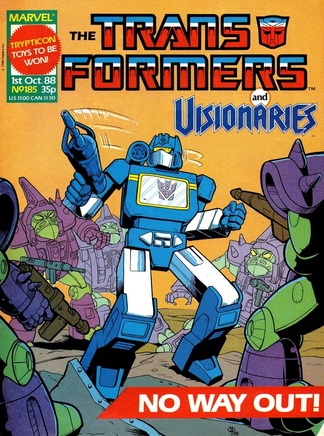 
We owe that fool alien nothing!


Soundwave was comfortably one of the better things in the previous issue and indeed has been one of the great constants of the book since its earliest days. A reliably strong character in the hands of Furman and a generally inoffensive background character under Budiansky, it’s only really the rather strange pirate impression he inflicted upon us back in Dinobot Hunt! where he has been less than brilliant. So it’s fitting that here, in a penultimate UK epic that has failed to equal the best of the series by some margin, that it is down to a lengthy Soundwave subplot to bring a touch of class to proceedings.

The joy of the sequence of the Decepticons leaving their base and being attacked by the Quintessons is that it is a disaster that is at the same time both out of character for Soundwave and perfectly valid for his current situation. The Quintesson agent with his story of the Autobots being off-world attacking his planet was obviously setting up a trap of some sort, and Soundwave would normally be the first to spot it. But he doesn’t, and why he doesn’t tells us a lot of the perils of being Decepticon leader.

As we’ve noted before whenever he’s had to fill in for a missing/dead/mad/all of the above commander, Soundwave really doesn’t want to be Decepticon leader. He’ll happily be a less obvious target on the next rung down playing his own games, but the real top drawer power terrifies him, mainly because every leader he’s worked under has wound up missing/dead/mad/all of the above. 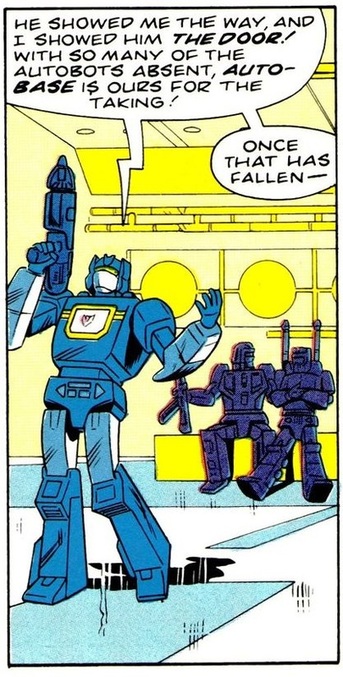 "The door... the door. Like he showed me the way" *Tap mic* "Is this thing on?"
But here in 2008 he’s effectively trapped as leader, and he’s actually trying to act like one in order to survive even though this means going against his better instincts. This will be spelt out more thoroughly in one of the good bits of Time Wars, but it also drives him here when he delivers a pep-speech to his generals as they ride into battle on Astrotrain (just like in The Movie): “Where Megatron, shockwave and other Decepticon commanders [with the regularity the ‘Cons change leader he’d have been there all day doing a full list] have failed I—Soundwave—shall succeed!”. His smugness here isn’t about making a decisive blow to end the war, it’s about achieving something that will keep the amassed psychopaths he calls his men loyal for a few days more.

Ignoring the obvious warning signs and attempting to do super villain style quips (with rather poor results “He showed me the way, and I showed him the door!”) inevitably ends with disaster as the Quintessons launch a surprise attack from ground and air, mercilessly ripping through the soldiers with him and pinning their reinforcements down at the same time. Soundwave’s horror as he realises the disaster his hubris has led them into is perfectly played, as is his rather desperate reassurance to Ravage (who with two sentences also makes a  good showing this week) that the Autobots will come and help them after he sends out a distress signal.

As with the Autobots two weeks ago the sheer brutality of the battle is well handled, Furman is of a generation that grew up when war comics were still a staple of the British newsstand and it very much feels like he’s channelling old issues of Commando and having great fun doing so. As a result the Quintessons have a much more defined strategy than they did during their attack on Autobot City, with a pincher movement as the basis for their attack and a depiction of guerrilla warfare with Sharkticons emerging from hiding holes in the ground in a way that feels very evocative of Vietnam.

Some of the great visuals in this sequence include an angry looking Astrotrain transforming; Soundwave casually shooting a Sharkticon through the guts and some poor generics being blasted from all sides. All in all, this is a highlight of the story, and we’re not even at the best remembered moment in this plot. 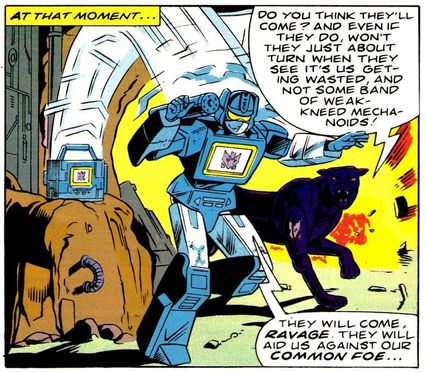 "They might even get my door joke"
The rest of the issue however, not only continues to be lacking something but actually feels like it comes from a different comic. So the Quintessons on their homeworld are still recapping the plot to one another—something that might be necessary for new readers (though this assumes they don’t read the Transformation page), but conveying the information in the same way every week makes it seem as if they have some sort of short term memory problem—and Wheelie and Wreck-Gar are continuing to outrun the pursuing ships. The only movement in either plot is the establishment of the fact Wreck-Gar has a specific place to run to in an asteroid in the Delta Six Quadrant. This, as it’s only one line, could have easily been inserted into last week’s issue and spared us visiting these characters at all here.

That leaves the Autobots. On Cybertron there’s an attempt to create some tension over whether Ultra Magnus will respond to the mysterious distress signal we know is from Soundwave. But as it’s obvious he will, the most interesting thing here is Furman featuring Eject as a means of reminding (or more properly establishing as they’ve not featured in the comic before) Blaster’s cassettes before they become important.

On Earth, Rodimus’ reaction of horror and anger to the sight of the corpses strung up on Autobot City is actually well played, but his decision to try and take on a force that has taken out an entire city with just four men (the next two issues will establish this isn’t his entire force, but he doesn’t bother to get them out the ship here) is just really stupid. Indeed, if not for Arcee trying to do the same by herself two weeks ago it’d probably be the most stupid moment in the story. Even if it is nice to see Wideload and Smokescreen on his team.

The end of the issue does give it a run for its money though. Despite the silliness there’s actually an important moment here as it’s established for the first time that the Creation Matrix doesn’t just create life, but can repair physical damage as well. This will go on to be a key idea that will form the basis of several major stories during Furman’s American run and beyond. 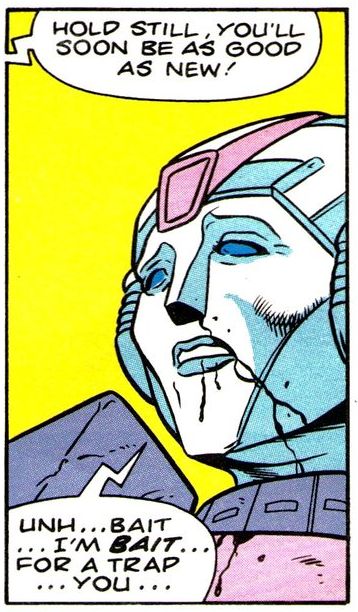 "How can it be Revenge of the Fallen Arcee is more credible than me?"
It’s just how we learn it. If we can forgive Soundwave for walking into an obvious trap because of outside constraints, there’s no such clemency for Rodimus here. Upon seeing Arcee laying in a ditch he cheerfully goes down to cure her with the Matrix despite the obvious risk of exposing the Autobots’ most prised possession in the middle of a combat zone. And what a “Fuck you” it is to Trailbreaker, Blaster and the others that he doesn’t care about any of his other troops enough to try the same for them. To make matters worse, Arcee actually points out to him that this is a trap and he reacts with the sort of gormlessness you’d more expect Trigger from Only Fools and Horses to show.

It’s no surprise to anyone other than Rodimus that the Matrix is stolen off him, but it is hilarious that it’s not even a named villain who manages it. A random Sharkticon just rides past and grabs it before flying off into the sunset. The Autobot leader: Outwitted by a guy who sits in a swimming pool and eats people all day.

The cliff-hanger is actually more interesting than it might seem now, where the idea of Rodimus reverting to Hot Rod feels rather old hat (even if it’s one of those things that have happened less often than you think). At the time—especially considering the fact The Return of Optimus Prime is the only TV story where this happens to have made it to UK video so far—it must actually have been quite exciting to see him stripped down to his original self. As with some of the similarities to Five Faces of Darkness I wonder if Furman was inspired by knowledge of some of the series (it’s a situation not unlike The Burden Hardest to Bear), or if the idea that Rodimus will turn back to Hot Rod without the Matrix is just to obvious a one to pass up.

Despite the potentially interesting situation created by the ending though, this continues the run of meh that has rather infested this entire storyline, Soundwave’s plot may be good but it rather buckles under the weight of having to carry the entire thing.

Dougie Braithwaite’s final art is much more variable here than last week. The Decepticon battle is generally well done with some great imagery, but the issue as a whole feels a lot more rushed as if he had less time to get it done, with Ultra Magnus and Eject looking especially poor. 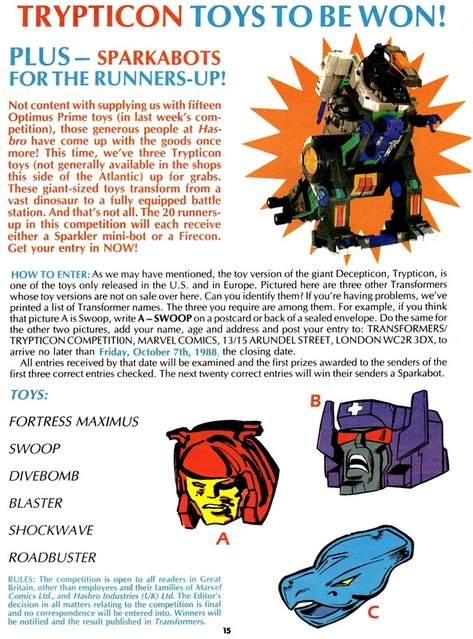 Transformation features a roundup of the other Marvel books out this month, and is the first time the title has mentioned that Galaxy Rangers has merged with Thundercats at some point, having suffered the rapid cancellation fate of Visionaries. The page is also keen to pimp this week’s competition, and with good reason.

Yes, you (if you have access to a time machine) can win a Trypticon! A toy not on general release in the UK. This must have been hugely exciting for kids at the time, especially after his good showing in the Flame story. It’s a fairly simple competition as well, with you only having to match the Transformers name to their face (with all three—Blaster, Fort Max and Divebomb—having been picked due to their toys not being out over here either). Runners up can console themselves with either a Firecon or a Sparkler Mini-Bot and their famous vehicular modes.

On Dread Tidings Hi-Test actually gets to speak this week, establishing his purple text in relation to his partner’s red. However, Dreadwind himself seems very out of sorts as Furman experiments with coming up with a different “voice” for him than Grimlock. Dreadwind is dismissive and unhelpful in his responses—most obviously when Stephen Bale from Sevenoaks mentions the Action Force Monthly reprint of Ancient Relics!, Dreadwind replies “Yeah, I know the stories is being re-run. Big deal!” This will wind up being par for the course when Furman leaves his role as editor (and perhaps he was on holiday this week?), but for the remainder of his time in charge Dreadwind will settle into a more helpful host.

Visionaries sees Cryotek and Galadria discover the talisman they need in the possession of villagers who use it to grow their crops through magic and whom hate technology. Despite this, when the Darkling Lords who they’ve seen drive a tank say the Spectral Knights are bad’uns they seriously consider it. Despite this oddity, the most memorable moment of the issue is Cravex using his fear spell to ramp up the paranoia of everyone present.

Combat Colin offers to help sort out some local thugs (dressed like Denis the Menace), but after the mayor of the town forbids Steve shooting them (!) the “Atomic stink bomb” is unleashed, with predictable—though sweetly funny—pongy results.

The Next Week page attempts to create some mystery as to which Autobot might turn up to save the day, but as the cover for issue 186 is used as the image you get given a rather big clue. Join me next Friday to see if your guess is right. 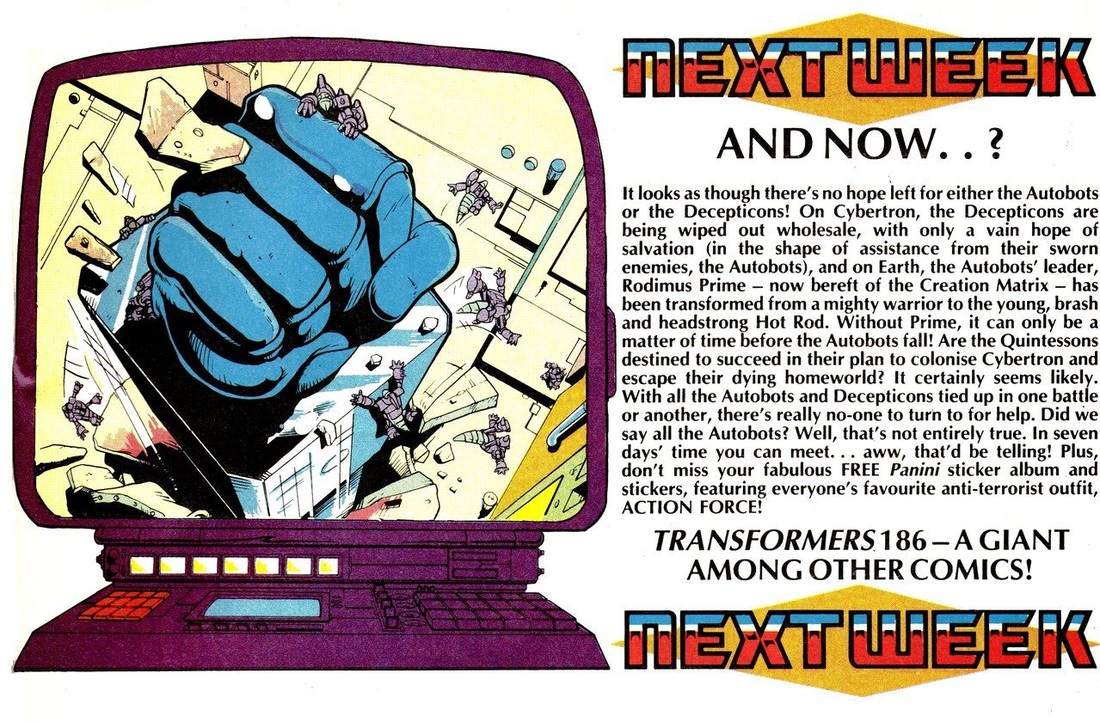