All in all, You're Just Another Brick in the Wall. 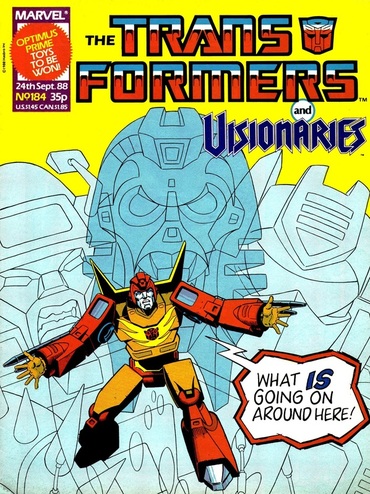 
After the near total disaster of last week, it’s something of a relief to say that the third part of Space Pirates! has a complete absence of Arcee. This means there was nothing especially extreme to infuriate my mother in this instalment and as such I have no memories of her thoughts on it, so instead I’m going to have to do something radical and talk about the comic instead. Let’s see how this goes then.

The main thing to note about this issue is that it might be missing the rampant sexism, but in its place we don’t really have very much of anything. This is very much a bridging issue, filled with scenes that go on for just slightly too long than is ideal, creating a sense of playing for time and there not being quite enough plot for six parts.

This is evident right from the start as we get an opening scene that is entirely redundant, despite being the basis for the cover. This sees Rodimus call up The Planet of Junk on the SPACE phone to ask what has happened to Wreck-Gar after he promised to come to Cybertron with vital information. The Junkions who answer are complete dicks to him for no readily apparent reason, seemingly completely uninterested in what has happened to their leader and conveying no useful information to the story, effectively wasting two pages. One of them a somewhat undramatic splash of Rodimus simply talking on the SPACE phone that artist Dougie Braithwaite tries desperately to make look interesting enough to justify it being a splash. There won’t even be a subsequent explanation for why the Junkions are being so cagey. 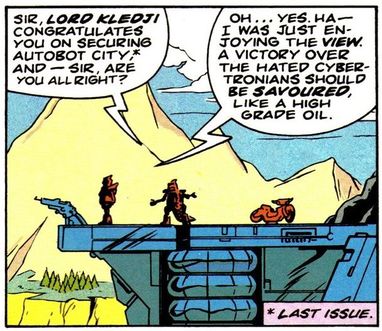 "Ah, sorry, have we hit 11 pages yet?"
It would have been more effective to just open with the following page of Rodimus wondering why Wreck-Gar has yet to arrive and being worried for the fate of his friend, an excellent little moment that builds on the kinship between them established at the start of the year. Furman also nicely increases Rodimus’ state of frustration at exactly the right moment with Blurr arriving to warn him of the loss of contact with Autobot City.

The following sequence on Earth is the one real example of padding in the issue that works. There’s no need to show Ghyrik enjoying the view of Earth from (the rebuilt since The Movie) Lookout Mountain, but it adds a nice character beat and—as it’s a location we associate with Hot Rod from the film—nicely connects the special guest villain to the hero on a symbolic level before they meet. Despite this, out of the page and a half it’s only the half page that’s relevant as Ghyrik learns a Rodimus led team is heading for Earth and that he must prepare a special welcome for them.

It’s down to Soundwave to keep things on point, as we cut to the Decepticon base on Cybertron and learn both that he is now Decepticon leader proper (after years of carefully avoiding the post there is now no one else left to assume it) and has been tricked by a Quintesson agent with fake information into launching a full attack on the Autobots. What’s notable here is that, amidst the Decepticon subgroup leaders present, Razorclaw and Hun-Grr are pretty much the only Transformers to have a decent featured role in this story who couldn’t actually have been in Transformers: The Movie. Indeed, the colour future stories have actually made—and will continue to do so for the short time they have left—a concentrated effort to avoid featuring many of the post 1986 characters, with the Terrorcons for some reason being the main exception. 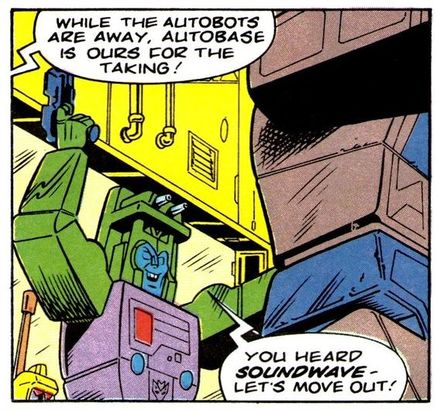 "This is the greatest day of my life!"
Whilst this is understandable from the point of view of trying to avoid what would happen to the various Nebulon bonded Transformers now their partners are past 50, it does also have the effect of making the 21st century stories look less “Futuristic” than their present day counterparts and is a policy the switch to black and white will bring to a rather sharp end as we finally get the answer to the burning question of “I wonder what Longtooth is up to in the future?”.

What makes this sequence though is Mixmaster’s look of pure goofy joy as they head off to attack the Autobots. He must just be happy at having been promoted to Constructicon leader at some point, the cheeky chappie.

Of course, the idea of the Quintessons tricking the Decepticons into attacking the Autobots on their behalf is another sign that Furman was at least aware of Five Faces of Darkness at this point.

After the economy of the Soundwave scene it’s back to the padding as we cut to Quintesson, where we have the ruling council recap that they’ve sent an agent to trick the Decepticons into attacking the Autobots... as we’ve just seen. This is then followed by three pages of Wreck-Gar and Wheelie trying to escape from Quintesson space that is also somewhat redundant as they manage to get away by simply, to use a technical term, “Going faster”. If they’d done that two pages earlier we’d have reached the big moment of the issue sooner. 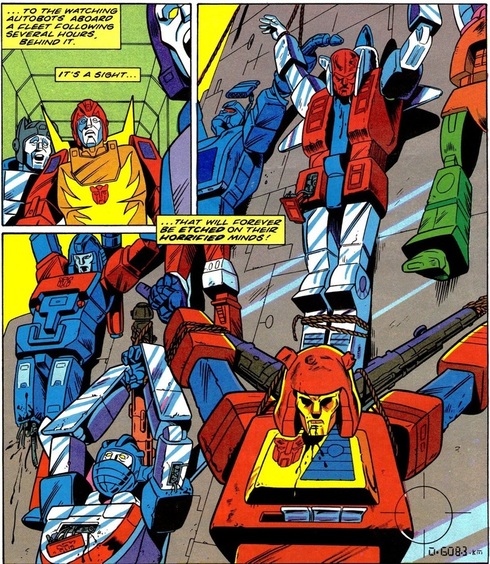 Welcome to your next nightmare.
Yes, whatever other flaws this issue has, the money shot is well worth it. The Autobots’ Advance Surveillance Droid (oddly the first letter of each word is bolded both times it’s mentioned as if it’s supposed to be the full explanation of an acronym. But if it is, ASD is never used), arrives at Autobot City and sends Rodimus back images of...

Yes, it’s a rehash of the dead Autobots hung up from the ceiling way back in The New Order, but I certainly didn’t know that at the time and it’s probably the most effective of the many homages to that story which have been done over the years. It also works for a similar reason: after seeing the Autobots shot down ruthlessly last issue simply seeing their corpses wouldn’t have an extra impact. Seeing them brutalised as well is an effective, and horrific, escalation that makes for a great cliff-hanger.

It also terrified the hell out of me as a kid, with Blaster's black eyes being especially nasty as he's doing his best Christ on the cross impression.

Oh, and Wheeljack being amongst the strung up corpses when he seemed to die in the film doesn’t bother me, we’ve seen Transformers recover from similar damage in the comic (as Blaster at least will from this), so as far as I’m concerned he just got better.

This isn’t a terribly satisfying issue, with only the Ghyrik and Soundwave moments really standing out amidst a lot of “Have I written enough to fill 11 pages yet?” style mediocrity. As we reach the halfway point of this story things are really going to need to kick into high gear in the backend for Space Pirates! to not wind up a bit of a mess.

On art we get our first (and penultimate) interior work from Dougie Braithwaite. His two issues don’t seem to get as much attention from fans as Bryan Hitch’s time on the book, but he is also someone who started very young with Marvel UK’s licensed properties that went on to do great things in later years. His work here is generally nice and solid, with him being one of the few artists to successfully make Rodimus look older than Hot Rod rather than just taller. His art also feels not unlike the work we’ll be seeing from Andrew Wildman right at the end of the year.

He also contributes something to the new look of the book as the SPACE Phone Rodimus uses on the splash page has been repurposed into the redesign and used for the “Next Week” page, meaning of course that readers would have already seen it last issue. 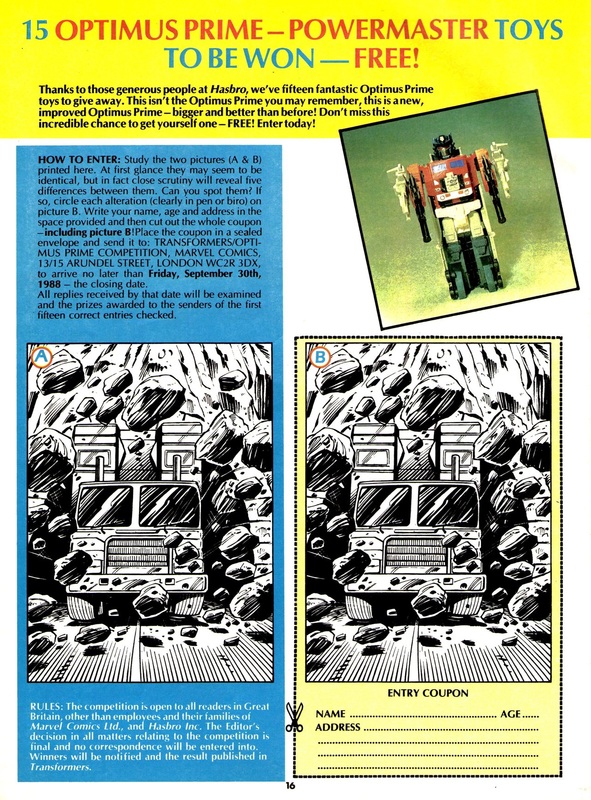 How many can you spot?
Speaking of art being used out of context before (most, in this case) readers would have seen it, the competition for the new Powermaster Prime toy has a “Spot the difference” competition based around an image from this year’s Annual text story Prime Bomb!

Transformation is mainly concerned with trying to assure readers, in a slightly desperate seeming way, that the redesign will see the comic reach a “New peak of perfection”. It also encourages readers to write in with letters for Dreadwind, which brings us to the biggest and most drastic change brought in by the new look...

Dread Tidings is initially stuck with answering letters meant for Grimlock, meaning little chance for Dreadwind to make much of an individual impact—though it is quickly established he’ll be making a regular thing of using the VVH to torture stubbies, ironically for a device used by Grimlock in the comic itself. What’s most notable though is that there’s no attempt to introduce the main gimmick of the new page: That Hi-Test will also answer letters and banter back and forth with his “Partner” in a different colour. It would have been easy to structure at least one of the replies here in that way, and its absence from this crucial first issue may explain why the idea will never really take off (along with the switch to black and white making it impossible tell who is talking).

Of the letters themselves, the most interesting is from Jody S. Calvert from Huddersfield (interestingly, and nicely, one of the few females to write in who doesn’t consider themselves such a rarity they have to mention the fact), asking if Rodimus would become Hot Rod without the Matrix and whether Metroplex will be in the comic. As Dreadwind says this is a rather amazing coincidence as it lets him pimp out the rest of Space Pirates!, I’m sure the comic was above this (though “Jody S. Calvert” does sound like a made up name doesn’t it?) but that does create the feeling of a planted letter.

Visionaries sees our heroes and villains split up to find the talismans like they’re on some sort of a Matrix Quest. Most of the action this issue is given over to Cryotek trying to get some action from Galadra as they camp out and he cooks for her and starts making suggestive “I’m full of surprises” comments. Sadly they’re attacked by Cravex and Reekon before he can show her his great big bear (by which I mean his penis) or she can produce her soaking wet dolphin (by which I mean her soaking wet dolphin. She turns into one, mind out of the gutter).

Combat Colin has a one-off strip that is one of the ones that feels as if it’s a stock script Stringer could have used in any of his gag comics with no rewriting. Colin and Steve, in their finest ten years out of date clubbing clothes, enter a dancing contest during their Corfu holiday—with dates other than the Giggly Sisters! *gasp*—with Steve winning due to a painful mosquito bite on his behind.

Next week, will Soundwave wind up being bitten on his behind as he leads the Decepticons into an obvious trap? 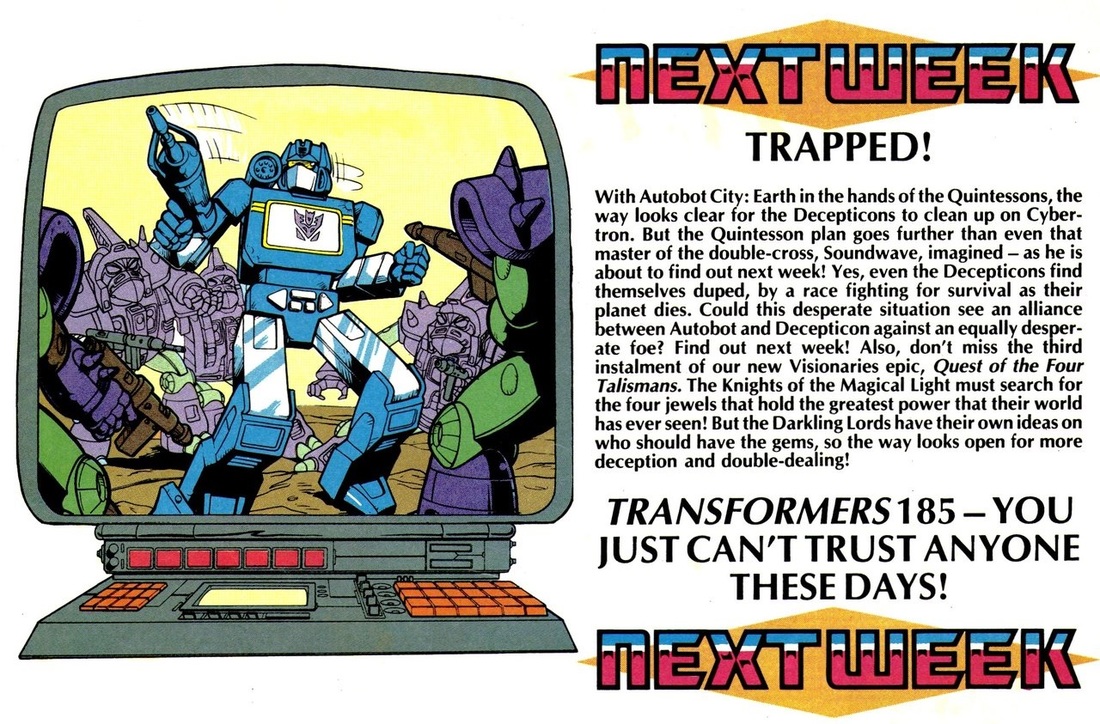