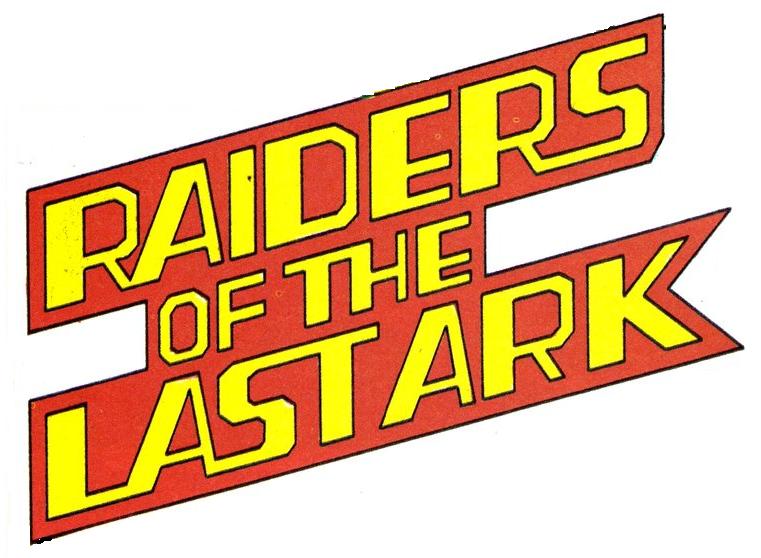 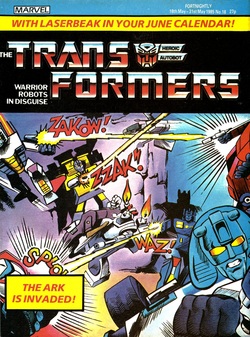 
Loathsome creature- you repulse me!


Astute readers may have noticed from my comments last week that I am not a great fan of this story. Much more than The Enemy Within! it feels like a début story from a novice writer. And whilst the previous tale just about survived the last second format change, it's going to be an absolute killer this week.

There are some good reasons for why things don't seem to be quite clicking here. It appears to have been a last second commission to cover the shortfall before the next block of US stories, and the original intent was that the UK stories would alternate between Parkhouse and Furman as writers. But, with Parkhouse having left Marvel Furman suddenly found himself having to produce a two part story very quickly. Which was then turned into a four part story very quickly.

It's a story Furman himself isn't proud of, it's the only UK from the main comic story never to have been reprinted in any way shape or form before IDW's Classics UK series. As it never popped up in a Collected Comic or filler reprint it seems the author was actively blocking it right from the start, and before he became embarrassed by his other early works.

This means it's the only one of the first three UK stories to not have had its black and white pages coloured subsequently. The IDW reprint actually treats these pages very oddly, remastering the backgrounds to their full white glory but leaving foreground characters in the slightly off-yellow of a quarter century old comic. The done for free by the friend who sold the issues to me scans I use for this site are of a much higher quality.

These does make Raiders... something of an underdog. A poor story ignored for years and never treated with the same level of love as those surrounding it. So what positives are there about this first part?

Firstly, the opening page is our first ever extensive recap of how the Transformers came to Earth. This is surprisingly early in the comics life, arguably as padding from a writer who can't think of anything else to put in the book. But this is still the first of several times we'll see the iconic battle as the Decepticon forces board the Ark interpreted by another artist. And it works surprisingly well at creating the first real sense of this being a book with a history. 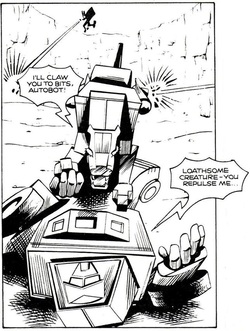 Windcharger's Greatest Moment
It does however change that history in two important ways that will be completely ignored in future. We're told that the Ark's computer Auntie (God help me, more on “Her” next week...) was responsible for the Ark crashing into Earth rather than Prime. Which is ironic considering his lingering guilt over making that choice will become a defining characteristic of Marvel Prime. The Ark also becomes one of a whole fleet of such ships for the title to work. Which is also ironic as this idea from a story he isn't keen on will be reused by Furman during the IDW days.

We also get another nice Ravage moment in a story that will become very focused on him. It's actually surprised me how heavily featured he's been in the book to date. Of the four storylines thus far; only Man of Iron didn't have a big chunk of the action for him.

He also gets to face off against his odd-couple comedy partner for this adventure: Windcharger. In his one and only lead role in any Transformers fiction. I'm not even 100% sure he's spoken outside of his introductory info dump (which lest we forget, wasn't part of the main comic in the UK). His mocking of Ravage as he throws him off with is insanely powerful Magneto ability almost certainly doubles his total dialogue to date. So the big Windcharger fans out there should enjoy this story hugely as his role gets even bigger over the next few issues.

On the creative side, we get a significant artist for the book's future on inks. Jeff Anderson will become the reliable constant workhorse of Transformers. The 80's Alex Milne if you will. His span of service will cover the entire life of the UK originated stories and he'll be the only person to work on the book through every phase of its life. He's rarely mentioned as any fans favourite artist (though he's never really bad and he does have odd moments of brilliance), but he will be the backbone of what's to come.

Sadly, this isn't the most auspicious way for him to start. Mike Collins pencils are distinct step down from his work on the previous two stories, again suggesting a somewhat rushed commission.

The story itself is insanely empty as a result of the cutting down and general lack of plot. As a follow up from his troops wanting a fight at the end of last issue Megatron launches a big attack on the Ark; Windcharger and Ravage wrestle and the exciting; newly created; cliffhanger is Sideswipe punching Rumble. Will Rumble survive? Find out in a fortnight! 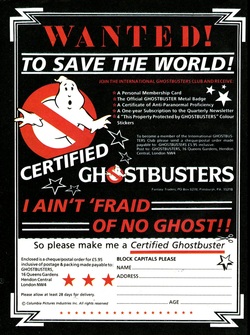 A Friend Still Carries His Ghostbuster ID Card.
Stacked up next to what the last two issues managed to do under similar constraints, that's a bit underwhelming isn't it? If nothing else there is some mild amusement to be had from Optimus being written in his full on John Wayne cartoon persona rather than the rather more conflicted one that will become standard for Marvel; especially under Furman. Compared to the guy who is doing his best impression of season 6 Buffy (“I'm so sad because I'm not dead. Let me waffle at you Hot Rod”) in ReGeneration One at the moment this Prime who shouts angrily at his troops for not trying hard enough to kill things is hard to credit as being from the same author.

With such slim pickings in the lead story it falls to the rest of the book to liven things up a bit. So what about the set up for a fight between Machine Man and Alpha Flight? Hows that grab you? No? Planet Terry getting a clue to his parent whereabouts? No? Robot Round Up (now a monthly feature as it begins to phase out) having a picture of a bearded Michael Douglas for spurious reasons? Chromobots and Matt and the Cat being...err short?

It's a lacklustre package to put it mildly. And a Next Issue box that is very much focused on trying to big up the non-Transformers content doesn't inspire much hope for a rapid improvement. But you never know, maybe the first exciting appearance of Auntie will turn things about and sex up the story. I mean, this long ignored aspect of the Ark is another thing from this story Furman is reusing in ReGeneration One so she must turn out to be something pretty special and...

Oh dear. Find out for sure next week. 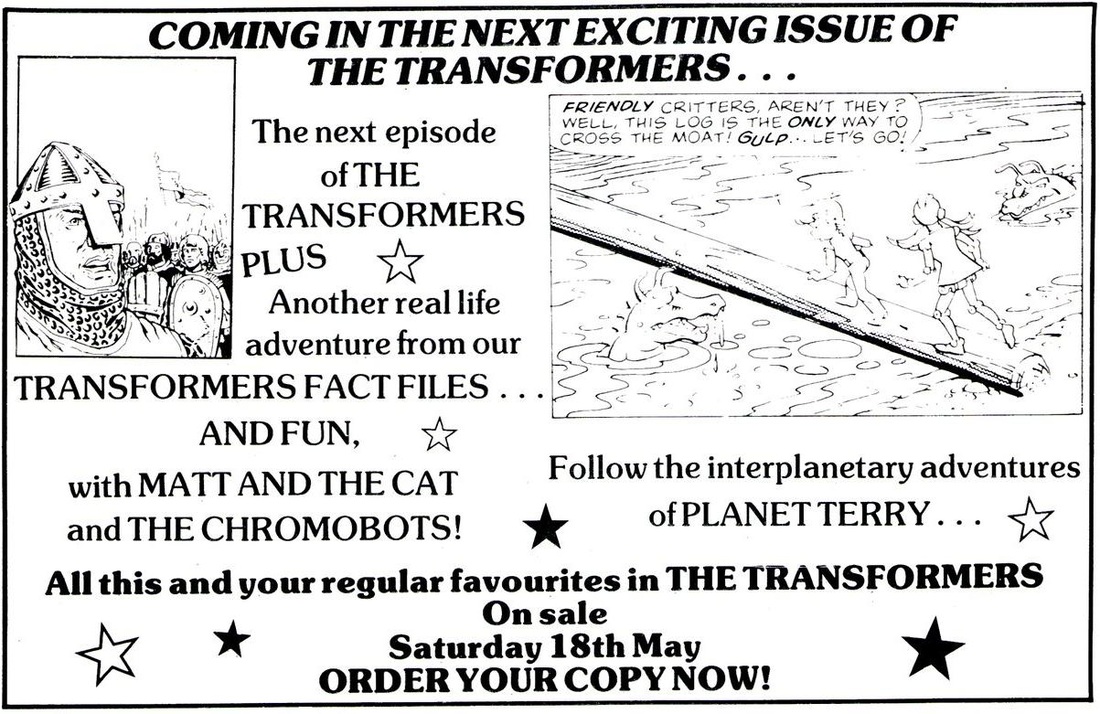