We Kiss, We Make Up. 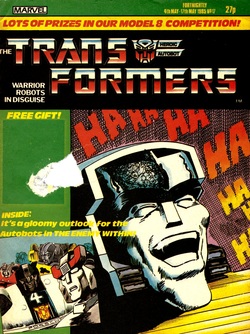 
Now you face the unfettered wrath of Ravage!

The internet is generally something I don't allow to annoy me. Being online and interacting with the rest of the world is a nice diversion from work and even the very worst of trolls I've encountered generally just wash over me or become a source of humour. Life is far too short to treat it as serious business, for the most part it's supposed to be fun. And even though the couple of bad eggs you run into now and again can make it seem so, most people on forums aren't out to push an agenda or have ulterior motives because they disagree with you.

Sometimes though the internet puzzles me. Yesterday I posted my thoughts on ReGeneration One issue 83 (IDW's continuation of the American Marvel comic) and had some very odd responses, as has happened before with that series. Now it's not the fact people think differently that's the issue- no one persons view is definitive and a great part of the fun of online discussion forums is just that- the discussion. Various people debating- sometimes heatedly yes but never in bad faith- the various merits or lack of them in any given piece of entertainment.

What's been odd about ReGeneration One is how defensive the people who really, really love it are. My thoughts on this latest issue were that is was decidedly average, lots of niggles and a couple of good bits but all bathed in a sea of beige. I've been harsher on both the latest issue of Robots in Disguise and pretty much all of the second half of Autocracy but no one has come out of the woodwork to accuse me of plotting beforehand to hate John Barber or pick apart my phraseology in displaying annoyance at Flint Dille's recycling of the '86 Movie script. I almost feel bad that no one is committed enough to the other writers to be prepared to come down hard on all criticism.

I think my favourite was one poster (who seemed to have a particular beef with me having described Wildman's art as abysmal in the previous issue) using a tortuous football analogy to basically say that not only was “Meh it's OK” equivalent to calling Furman and Wildman a ****, and that I was trying to calling anyone who disagreed with me a **** but that I was also a ****. Which is at least mildly amusing because that middle one effectively became a self fulfilling prophecy in the case of this poster.

But even generally there are people who seem who take this comic so personally they are determined to pick both my posting style and motives apart rather than discuss, or even straight out dismiss, any of the points I've raised.

This self indulgent opening isn't intended to evoke pity or any other such nonsense (this may have all annoyed me more than I normally allow the internet to do so, but it is still just the internet at the end of the day), but the idea with Transformation from the off was it would be a very personal journey through the comic and every entry would try to reflect my mood and thoughts at that specific time. 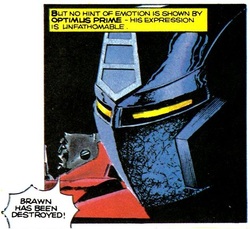 SPOILER: He hasn't.
And my mood coming into the final part of The Enemy Within! with regards to Transformers is somewhat perplexed and hesitant. Will the slightest negative comment below bring the Furmanites out to rip the whole thing to shreds? Will it be so amazingly good I'll be left slapping the side of my head and going “Of course! This is why Furman should be given special preferential treatment over all other writers on the franchise, what a fool I've been...”

Well, it's not that good, but it's lucky that this happens to be a generally very solid issue, I think if all this had happened next week my general irritability would have seen me tear into Raiders of the Last Ark more than even its mediocre status deserves.

As mentioned last week, the splitting up of the final into two halves works surprisingly well. At only five pages this issue has the least amount of actual Transformers content in the comic to date. But it's a very strong five pages that still works as a self contained entity. Of the various stories that will suffer this fate over the years (the aforementioned Raiders and the both original and reprinted tales during the three story era), this is the only one it really works for.

We even get a nice dramatic opening, as Brawn is seemingly blow up. And whilst there is some humour to be had in Optimus Prime being described as having an “unfathomable” expression (so, situation normal then?) and you're never really convinced Brawn is really dead, it still packs a surprising punch.

Meanwhile, a smug Starscream is congratulating himself, only to be shot down by Ravage. This pay off to their earlier fight is fantastic, as is how Megatron uses it to bring his troops back on side. His delighted laughter once he's alone with Ravage is an especially nice touch. It's a shame that it'll be a very long time before we see Ravage act as Megatron's trusted confident again, and only very briefly in the early 200's. Having someone he can be himself around makes the Decepticon leader feel a much more rounded and sane person than will often be the case.

And this is where we reach the happy little accident in Starscream's character development I talked about during Part 1. He's made his gamble for power and has been thrown down hard as a result. You're left in little doubt that Megatron would have no problems killing him if he were to try anything again, and it makes perfect sense that- Target: 2006 aside- the jet will be keeping a low profile in the background until he discoverers something that could give him a huge advantage in the Underbase many years hence. Nifty, and entirely unintentional. The first of many flukes that will help the American and British stories work as a coherent whole. 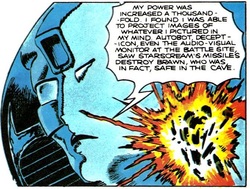 Mirage will forget he can do this.
Over in the Ark, it turns out Brawn is alive thanks to Mirage being given extended hologram powers by the accident. This is something that takes a second to click when read today because after a quarter century of all other media following the cartoon and showing Mirage's skill as being invisibility it's easy to forget he actually has a slightly different special power in the comic; especially as this will be the last time he uses it.

This is where Optimus Prime's plan really doesn't stand up to close scrutiny; apparently Mirage was always supposed to wait until Brawn had proven his innocence before faking his death. I'm still not exactly sure how he proved it, nor if there was any real intent to actually try and kill Starscream (or is it the case that if he had killed it would have shown he was still nuts? Because if it is he doesn't actually seem to be holding back in his attempts on Starscream...).

Overall, this is a very strong start to the career of the most prolific Transformers writer. It's not as strange or unworldly as Man of Iron was but as a straightforward kids action story it does exactly what it needs to do with a degree of style.

The main weakness throughout is that the Decepticons have been constantly better written than the Autobots. The three leads of Megatron, Starscream and Ravage are all well characterised and intelligent throughout.

The Autobots, mad Brawn aside, are all a bit dull and forgettable at this point. And, as will become especially clear in the next story, Furman doesn't have a handle on how to write Optimus yet resulting in some slightly muddled behaviour on his part. But as a sign of things to come, it's most promising.

Everything you ever wanted to know about Alcatraz.

The rest of the comic, much less so. I'm now thinking Chromobots isn't supposed to be funny after all, this instalment sees a terrified woman being attacked alone at home by a robot. But if it's supposed to be at the very least a comedy drama it pretty much fails on both counts. Elsewhere Matt and the Cat seem have been locked up in a cell on a spaceship not doing very much for what feels like years.

From the Fact Files returns with The Truth About Alcatraz!, which cheerfully aims to try and make America's most famous prison as dull and uninteresting as possible. And the less said about Planet Terry the better.

On the plus side Machine Man is growing on me week on week, it's completely unintentional but his complete dickishness has actually become rather endearing. He probably wants his arm back because he can't bare to only have the one hand to flip the bird with.

Next week, I'll hopefully be more cheerful, and I'll need to be. We've got four weeks of slightly desperate filler coming up. 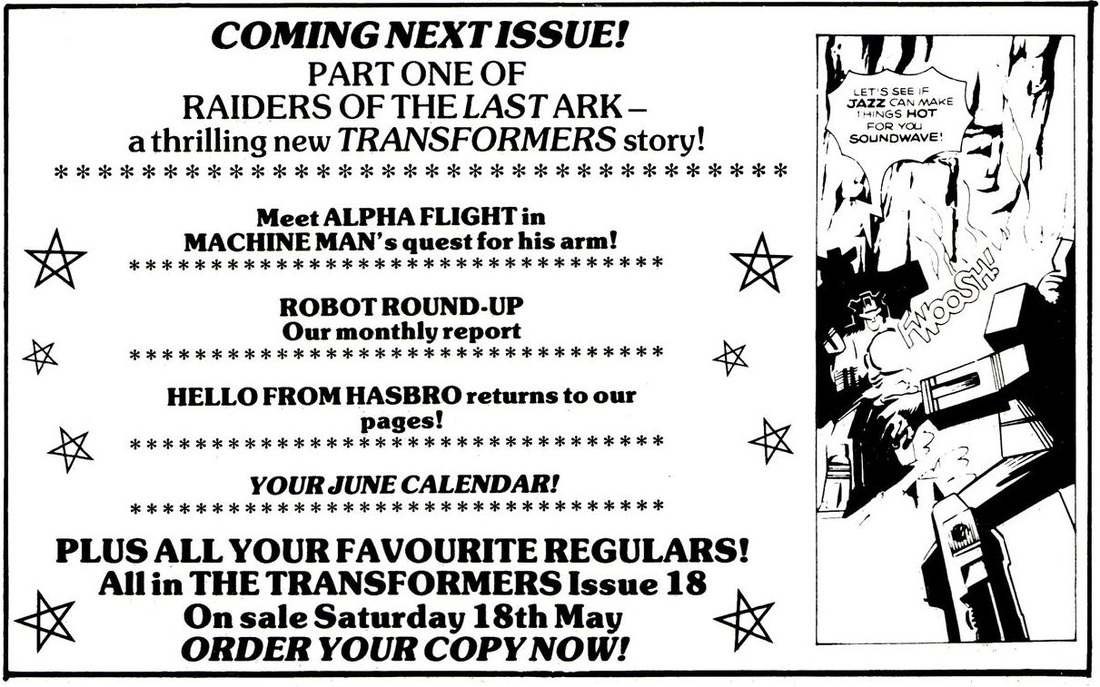