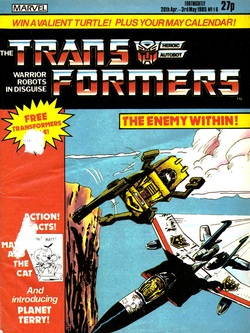 
You see, I know how to land from this position... YOU DON'T!


Some good news and bad news to kick off with this week. First the good, the return of Robot Round Up means we finally get an explanation of what the April Fool's joke was back in issue #14. It seems there was a false story put into the feature about a robot called Jasper that was entirely made up. As this read pretty much exactly like every other “Some crazy old man has built a robot” story Robot Round Up has done I'm not sure how well this worked as a joke, but at the very least that's a weight off my mind.

The bad however is that for the last two years I've been keeping various things in storage in my brother's empty house, including what survives of my original Transformers comics from my childhood. Sadly, with my brother now renting out his house, I've had to have a massive sort out and these dear, battered old comics have had to go in the recycling. Supplanted by the new massive collection I'm using for this blog and in no good condition to sell onwards their time had come and gone. It was still a sad thing to do though, great chunks of my past detaching themselves like icebergs. There will be many nostalgic stories from reading those comics that will start to crop up once we reach the point I was buying the book as a kid (including a most amusing porridge anecdote in the early 200's), so let us give these fallen heroes one final salute.

My, that was all a bit serious and pompous wasn't it? What we need is something to cheer us up. Like two giant robots beating the merry crap out of each other.

As mentioned last week, this sees a rather drastic change in the format of the book. Because of the need to create more of a buffer zone between the original publication of the American issues and their UK reprinting (likely because plans were already being put into place to go weekly) and there not being enough cash in the kitty to create another four part story, every comic between now and #22 will be a standard 11 page instalment cut in half.

We'll talk more about what's being used to pad out the rest of the issue in a moment, but for now it's fair to say this will have a huge, huge impact on the main strip. Especially when we get to the clearly intended to be a bit of light fluff but now dragged out over two months Raiders of the Last Ark.

What's surprising here though, is that-if not for last issue promising this would be the conclusion- it'd actually be hard to tell this was a last minute change. Obviously the story is shorter than usual, but it feel as if it were written that way. It builds up to what feels like an entirely genuine climax, with Brawn waving his white flag of surrender as Starscream flies in for the kill. 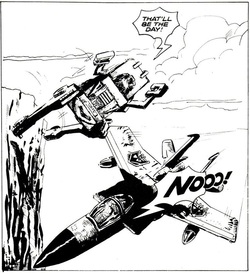 John Wayne or Picard?
It's also helped that the plot here is nice and straightforward; again working to the length. The issue is just one big fight between Starscream and Brawn, whilst their respective sides watch the whole thing on TV (an intentional send up of kids doing the same with the TV series that would have started showing up in Britain about this time?).

Fights in Transformers (and indeed in comics in general) can often wind up feeling more like two robots posing at each other rather than a viscous struggle to the death. This is, however, successfully avoided here. Partly because Mike Collins really throws himself into the art but main due to Furman having clearly thought the whole thing through.

Both characters use their brains to come up with tactics that are reflective of their abilities and personalities. Starscream preferring to keep his distance and bring fire on down from above. Brawn meanwhile prefers close quarters combat and is smart enough to manage to get up to his foe's level but with just enough of an impulsive streak not to think through the implications of what happens when you let go of a jet in the air and you can't fly.

On the sidelines we have the official observers, Ravage and Mirage. Ravage gets another stunningly drawn panel showing off the massive gun strapped to his back (I suspect he was a favourite of Collins), and though you're clearly meant to think he's there to take out Brawn if he wins it's fairly obvious who his real target is.

Mirage is hiding in a cave and being all mysterious as the big reveal as what's going on with him is held off till the next issue now. It's actually hard to work out what Prime's plan was here, but that's something we'll talk about with the conclusion.

One random highlight; and the first real sign of Furman as a culture vulture that will see full bloom in Nightbeat; is Brawn quoting John Wayne in The Searchers as he jumps on Starscream. Though lets face it, most of us born after 1980 will thing of Yesterday's Enterprise when they read him say “That'll be the day”.

With the main being short and sweet, we get an exciting new comic to make up for it. Planet Terry. No, not Planetary, that's a bit too good for a Transformers back up at this stage. It's a reprint of an American comic from Marvel's Star imprint- specifically aimed at younger readers. You can tell it was picked in a hurry because, whilst all the other stories in the comic to date have had some sort of prominent robot/machine themes this can only manage a robot girl called (sigh) Robota.

What are they worth now?
The story focuses on Planet Terry, an annoying white haired boy in search of his parents, presumably to punch them for giving him such a stupid name. As with Chromobots it's likely supposed to be funny, but every single line is painful. Sure, it's skewered to the younger market, but you'd have to be a half formed foetus to enjoy any of this.

What's even worse is the editorial trying to present the dragging out of The Enemy Within as a good thing because it means they get to share Planet Terry with us. The bastards.

The aim of this blog is to be generally upbeat and cheerful but it has to be said the general quality of the secondary stories across the series to date has been pretty wretched. Machine Man has probably been the least annoying and, as many of you may have noticed, he's still extremely annoying. One of the better things to come out of the looming format change is the streamlining of the book so we only have the one, generally of higher quality, back up story.

Over in the Openers page we get our first letter annoyed at the lack of follow up from issue 8 (“What's happening? You start a great comic and kill off the good guys”) and promotion for some amazing Transformers marbles. Which look exactly like normal marbles but come in a box with a picture of a Decepticon jet on the front. It's hard to tell which one in black and white, maybe it's Acid Storm?.

The calender is worthy of special note for once as Sideswipe has what is presumably supposed to be a look of smug satisfaction on his face but instead makes him look as if he's crying. Perhaps he's seen the future and knows he's never, ever going to do anything in the comic?

Maybe it's just been thrown into sharp relief by the comparison to Planet Terry but I rather enjoyed Machine Man this time round. It mainly consists of him walking into a pub and beating the crap out of the patrons because it will help him find his arm by... err... well as it achieves nothing he's just being an arsehole really. Awesome.

Next week (back on Friday hopefully) we have more minimal appearances by the Robots in Disguise as Furman's first foray ends and the return of the exciting true life Fact Files. If that's not too exciting for you, join me then. 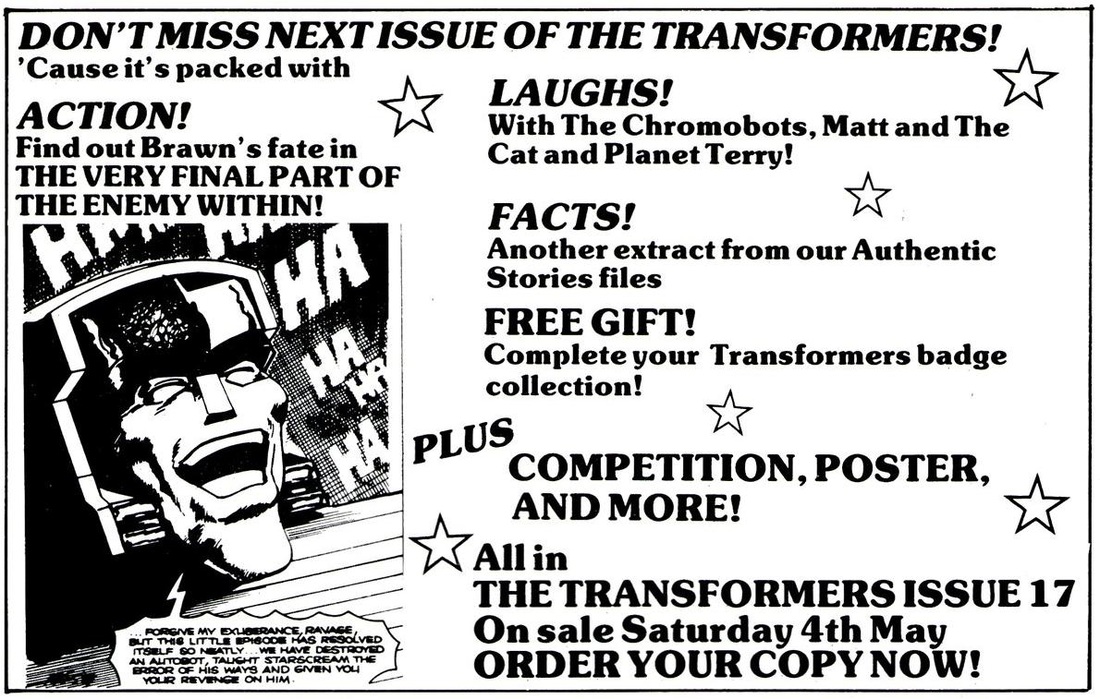