The Accused Is An Innocent Man. 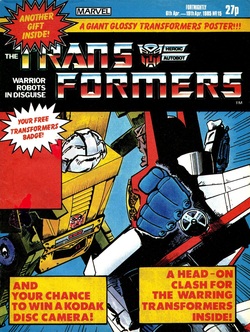 
After last issue revelled in its set pieces, Part 3 is more of a plot heavy issue, being concerned primarily with moving the pieces into place for the big final. Some of this manoeuvring is a tad clumsy but there's still a great deal of hugely enjoyable stuff here.

The narrative is somewhat more straightforward here, with only the opening following Brawn and Starscream's fights against their comrades really continuing the split narrative. Starscream gets some nicely done aerial combat that not only furthers the sense of him as a dangerous soldier rather than a comedy coward, but gives Skywarp and Thundercracker a rare chance to shine.

Brawn on the other hand is somewhat easily taken down, but this does result in what is arguably the best remembered thing about this story, the totally random and out of nowhere appearance of Red Alert. Astute readers may remember the “Meet the Autobots” page was left out of issue 2 meaning there's nothing to say in the UK that Red hasn't been there all along (after all, there are other characters who've been barely present to date, poor old Windcharger and Huffer amongst them), but the fact he's only seen on this one page and won't been seen again for close to 200 issues is somewhat perplexing. What really makes it hilarious though is he gets the standard “Introduce yourself in as grand a way as possible” opening dialogue. “It falls to Red Alert to stop you now”.

Strangely, when the American stories will introduce the second year Autobot cars Red Alert (and his fellow early UK showing stable-mate Inferno) will be left out, rather neatly meaning him being here isn't that hard to reconcile with continuity if you squint. Whether his presence was at Hasbro's request in order to promote the toy (though if it was, it's strange it would just be him out of all those new cars and he'd only get two panels) or if it was just a mistake as a result of the reference material given to Marvel UK including him is one of those things we'll probably never know.

With both characters captured, we launch into the second phase of the plot. Starscream asking for trial by combat. This is a very standard SF plot- it's a good bet Furman was thinking of Amok Time in particular when writing it- but one of the writer's strengths will become taking standard plots and having great fun with them, as we will see here.

What's really nice as a result of this is seeing Megatron alone watching videos of Cybertron and getting all nostalgic for home in a rare character beat for him. The video is of an ancient trial by combat between a traitor and rebel (ah, see what they did there?) that resulted in the death of both.

This is actually a seminal moment for the title as it introduces the first named comic created Transformers. Tornado and Earthquake (guess what their special powers are) are fairly generic and unmemorable. Tornado will make it into an Annual story and both will be part of the big massive joyful fanwank that was Squadron X in Last Stand of the Wreckers, but other that that their impact is negligible. But this is the road that will lead us to Spanner, Xaaron, Scrounge, Impactor, Flame and Drift. But don't hold Drift against them, the rest are some of the most memorable and important characters we'll see over the rest of the series.

This is where the plotting becomes slightly forced, Megatron needs an expendable foe for Starscream to fight, and by amazing coincidence Ravage has just heard about Brawn. Even more amazingly Optimus Prime actually agrees to let them fight.

Brawn faces Prime's compassion.
The problem here is Optimus is desperate for proof that Brawn is back to normal and isn't still a crazy psycho-killer. So it's hard to figure out how having him fight someone to the death will show this. If Starscream kills him that proves he's OK? Considering his bad mood in the story thus far I suppose it's possible he just really doesn't like Brawn and wants to see him suffer. A lot.

This is perhaps where using Mirage instead as the lead may have helped. The character has already been voicing doubts about the Autobot cause and it would be easier to see Prime having good reason for lingering doubts over him rather than poor old Brawn who's basically being punished for being the victim of an industrial accident. Luckily for the be-clawed one Prime comes out of his sulk long enough to listen to what Mirage has been trying to tell him about the accident for the last two issues, which will come in handy in the conclusion.

The final two pages, though not as innovative as last issue, still provide a memorable climax as the two outcasts head out to fight, with Optimus and Megatron giving the official observers- Mirage and Ravage- secret special orders as Brawn and Starscream go head to head. A great little touch is having Brawn shout “FOR THE AUTOBOTS!” as Starscream thinks “For myself!”.

The intent was, even when this issue was published, that this would be the penultimate instalment. The Next Issue box even still refers to Part 4 as the conclusion. Why it won't be is something we'll discuss in detail next week, but this is the beginning of a difficult time for the title. Something evident here as Robot Round Up has been unceremoniously dropped in favour of a new, thankfully short lived, feature called It Really Happened! A Tale From the Transformers Fact Files...

This is not, as it sounds, character profiles of our leads. Older readers of Doctor Who Weekly may remember how, in the early days of that title, it would be padded out with a cheap public domain adaptation of War of the Worlds that would have Tom Baker's face slapped over the opening going “This is like, totally my favourite story, let me tell you about it...” This is equivalent to that, but rather than classic fiction it's a comic summary of the real life sinking of the US Submarine Squalus in 1939. 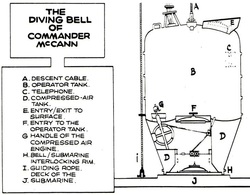 The Amazing Diving Bell.
Considering this was a genuine harrowing event where people nearly died (and the rescued sub winds up accidentally killing many of the people responsible for saving it by accident when it sinks a Japanese boat with them on-board as prisoners) I'm not sure a cheerful exclamation mark adorned Trapped Beneath the Waves! title is appropriate. Whilst war stories were, even as late as 1985, a staple of the British comics industry it's also hard to see what the appeal would be to readers of a giant robot comic. There's not even a badly superimposed drawing of Prime to introduce it. Still, we get a nice education cut out of the diving bell used in the rescue mission so, yay?

More importantly though we have the first definite Lew Stringer strip with the début of Robo Capers. This very short gag strip is often criticized for not being as good as the later Combat Colin, but frankly compared to the two other “light” comics in the book it's Monty Python.

Next week I'm at a wedding (not my own, I'm still single ladies) so join me on Thursday as we look at a Transformers story that's half what it used to be. 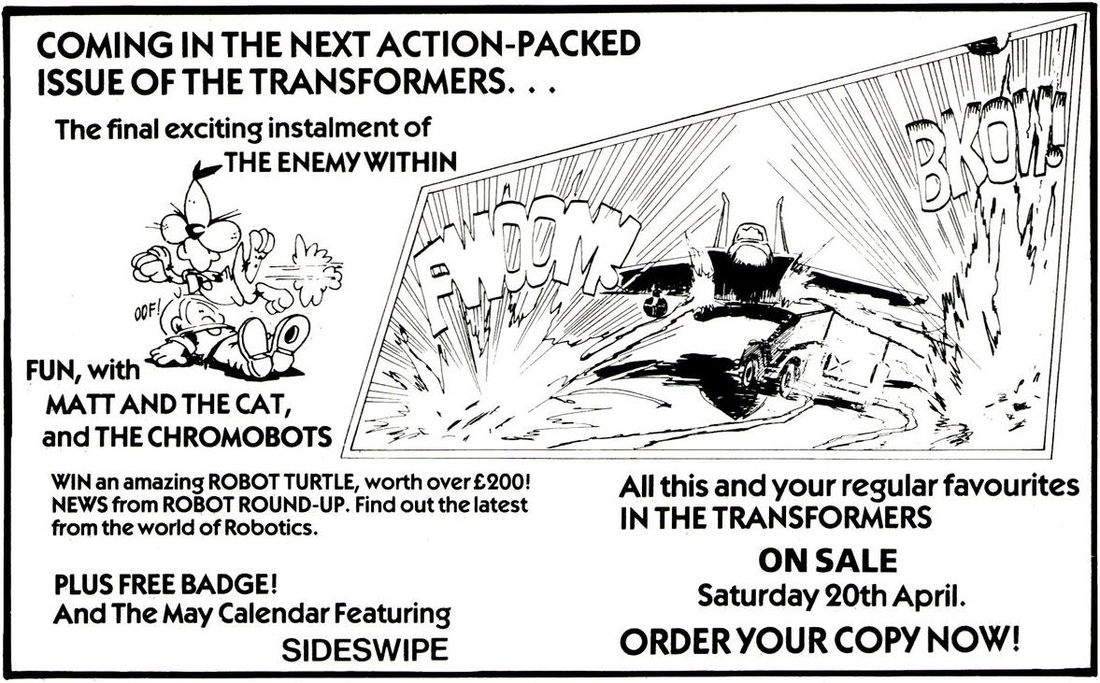