It's All Over the Front Page, You Give Me Road Rage. 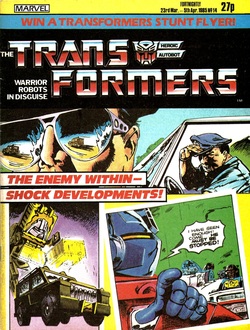 Oh my... My bullets have no effect!


It's going to really bug me. Somewhere in this issue- set up in both the editorial and confirmed by a sneaky footnote beneath Matt and the Cat- is an April Fool's joke from designer Theresa George. But despite reading it cover to cover twice I've completely failed to spot it. That's the sort of nagging thing that keeps me awake at night that is. Unless The Chromobots is a really, really elaborate gag?

But of course, there's no time for that sort of frivolity when Brawn and Starscream are out to cause as much mayhem and chaos and possible. This second part of The Enemy Within! sees Furman begin to experiment a bit with the format and structure. Something that's obvious from the off as we get a subtitle for the first time (though Man of Iron will retroactively get them in the Collected Comic), something that will only happen sporadically in the future.

But it goes far beyond messing about with the titling. For the first time in the comic we get two distinct plots running in parallel with each other, which inter-cut more and more rapidly until the last two pages. With both plots getting half of each of those last two pages in order to misdirect the reader as to which group of robots Brawn and Starscream will be facing in the middle of their rampage.

Whilst it's hardly Waiting For Godot, it's still a very different approach for this title and the beginning of all sorts of devices Furman will use to get the maximum amount of plot into the relatively tiny 11 pages. It also nicely disguises the fact that there's not actually a huge amount of plot progression. This is more an issue of-pretty damn good- set pieces, but the cutting back and forth means we don't linger on any one long enough for this to become obvious.

In the first part, the Starscream sub-plot was the more entertaining of the two threads, but here things are much more even. Brawn doesn't do much more than rip the crap out of anything that crosses his path, but exceptionally fun. Completely off his loop he's decided humanity has enslaved the machines of Earth and is on a mission to free them. It's an obvious gag (one that Bob will repeat for the profile of Tailgate in a couple of years) but it makes these sequences deliciously silly. Which is fairly impressive considering that there's a car crash that likely causes the first human deaths in the comic. 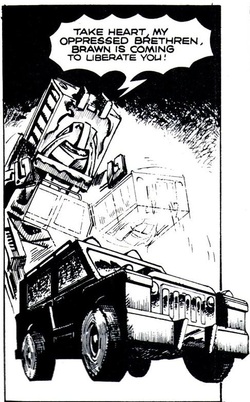 The Malcolm X of Transformers.
Starscream meanwhile is having less of a gay old time during his attack on the American airbase, becoming increasingly frustrated at how his cunning plan is failing because the Autobots are, for some unfathomable reason, not coming to attack him. One of my favourite parts of the first Bay film is the casual way Starscream rips apart some F-22's and this has a similar feel to it. The fact he can take on the complete might of the US Air Force with almost complete disinterest is both very funny and gives him a sense of raw power the character is usually missing in his more snivelling portrayals. Plus, only a couple of pages after Brawn's possible homicide he definitely kills a human when he destroys an F-15.

Interspersed with all this we get two scenes dealing with our leads former allies. The opening panel of a battered and bruised Ravage dragging himself through the desert whilst screaming Starscream's name is a memorable bit of art from Mike Collins, and Megatron's genuine concern for his injured warrior is another nice bit of camaraderie amongst the ranks. It's odd to think the Decepticons are going to be spending most of the next 8 years caught up in squabbling amongst themselves.

The Autobots are actually presented much more harshly, Optimus Prime is clearly in a bad mood and deals with his troops very curtly as he tries to find out exactly what happened. In terms of PLOT FORESHADOWING this includes telling Mirage to STFU as he tries to explain the accident affected him as well.

The aforementioned split cliffhanger is another strong ending as well, Starscream turns expecting to find the Autobots facing him and Brawn... I dunno, expecting the evil machine enslaving pixies. But each are instead confronted by their team mates, with Megatron planning to destroy his lieutenant and Brawn screaming that the Autobots will only take him back in pieces.

Whilst the misdirection over which TV news report the Autobots are following up on should be obvious, it still manages to fool me if I leave it long enough between readings. Whether that says more about the quality of the comic or the mushiness of my brain I don't know. But the splitting of the last two pages in half lengthways between each plot makes for some striking visuals.

Mike Collins- who'll be taking care of the art duties till we synch back up with the American series- generally does a great job. I especially like how the cop who makes it onto the cover is wearing the big shades everyone knows all American cops wear. His art has a similar feel to Ridgeway's as well (hardly surprising as, according to Collins, Ridgeway created the character models the UK artists used in the early days, apparently by tracing round the toys) making for a smooth transition.

There is one odd visual moment though, the stubbly human who crashes his car because of Brawn isn't the same bearded young George Lucas lookalike saying goodbye to his wife on the previous page, even though the storytelling makes it feel like it should be. Unless George's car is supposed to be the one crashed into, the colour version might make that a bit clearer. On the plus side though, Sideswipe has something that very nearly almost looks like his actual head now. 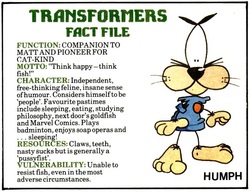 The Humph Fact File.
As well as the elusive promise of an April Fool's the rest of the issue stands out for giving us a Transformers Fact File on The Cat from Matt and the Cat. I'm not entirely sure why considering he's displayed almost no personality so far, but it is the sort of bleeding between the comedy back up and the main characters we'll see Lew Stringer do much better later on with Combat Colin.

There's also a letter that really lays in hard into the rubbishness of Robot Round Up, which is presented without comment suggesting not only do the editorial team agree but that the writing is on the wall for that particular feature (oh let us hope it is soon).

Elsewhere, Chromobots introduces a creepy paedophile tramp impersonating robot and Machine Man successfully defeats Rory McGrath, and actually seems to be experimenting with Spider-Man style quipping rather than just being a complete knob. It's a welcome change.

One puzzling thing is the advert for the Raiders of the Lost Ark comic, why are Marvel UK making such a big deal about running the comic adaptation of a three year old film (this is lest we forget, after the sequel came out).

That still leaves us the question of where the April Fool's joke is. Where where where? My work rate is really going to suffer tonight with that question running around my head. Assuming it doesn't drive me mad join me next week (back on Friday) as I look at what will be the last 11 page issue till the American stories resume as the budget problems begin to hit hard and the Cybertronian legal system is shown to be highly dubious. 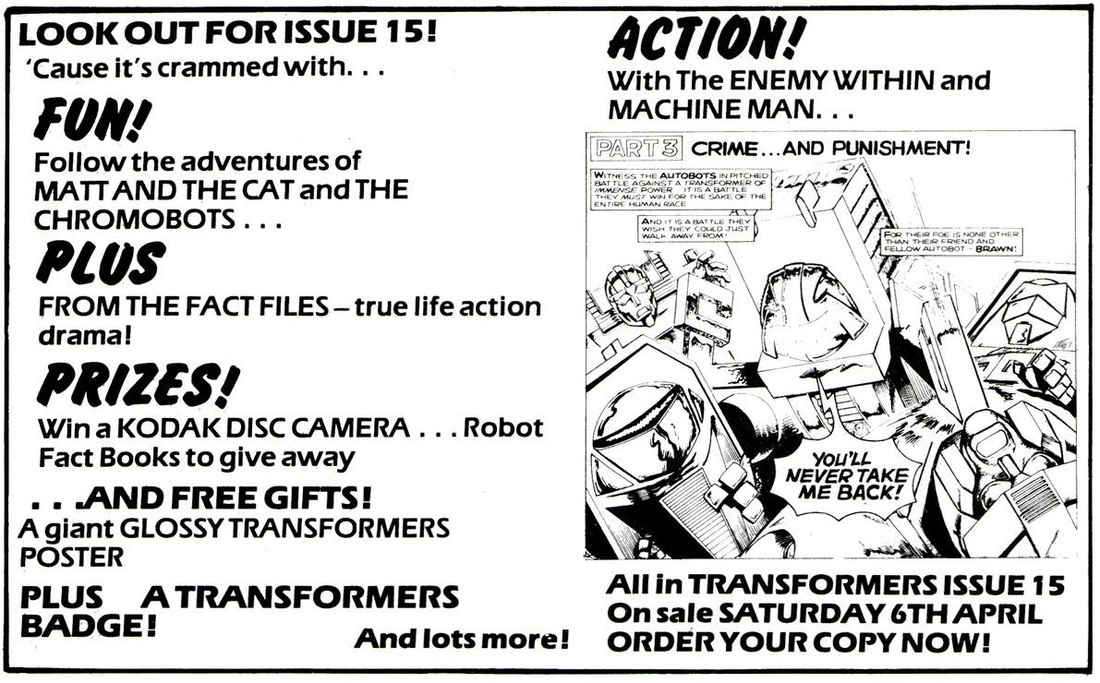