It Was a Graveyard Smash. 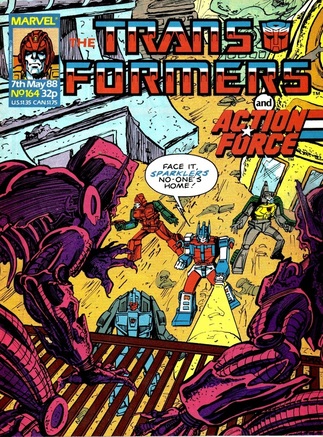 Despite Transformation promising us a horror story the complete absence of Pretenders means this isn't as bad as all that. In fact, as a story without any of the outside constraints that have impacted on the last few months (writing in new toys. Writing back in old toys. Ramming in Richard Branson) we embark on a story that is—small promotion for the Duocons aside—just about having the author having fun. That means Furman gives us the best issue since the end of Legacy of Unicron!

The start of May is a slightly odd time to do a zombie story, you'd have expected something like this to occur during October. It does make you wonder if Furman was keen to let off some steam and play with a genre the comic hadn't touched on before, though it does echo his early work for Scream! Regardless of the reason for it, he successfully predates the great zombie comic boom of the Noughties (of which the lovely Nick Roche written and drawn Spotlight: Kup was the sole modern-era Transformers contribution. What's an Infestation?) by more than a decade. This results in a story that, despite cheerfully paying homage to every cliché known to the zombie genre, feels surprisingly fresh and modern.

Like all good horror films we get a cold open that sees the Autobot who will later be named Chuffer (and also Steamer, but people seem to stick with Chuffer) by the letters page wandering around the abandoned Cybertronian City State of Kalis before getting picked off by a zombie Autobot. It ticks all the boxes (including the fact he failed to listen to a friend who told him not to go out, it’s now impossible not to read “J’Muk” as “TMUK”) and neatly shows the great strength of this opening two part salvo of the storyline: Dan Reed’s art. 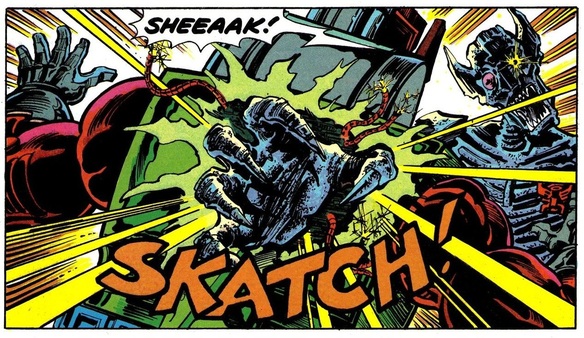 Dan Reed: Master of the ARRRGGGHHH I'LL NEVER SLEEP AGAIN.
As we’ve discussed before, Reed was the Livio Ramondelli of his day, a love him or hate him artist with little middle ground (I tend to veer towards the former for both men). However, even his biggest detractors agree he was born to draw zombie robots, and this issue is full of fantastic, horrific imagery of undead monsters looming over our heroes. For once the misshapen proportions and wobbly limbs play to the strengths of the story and it’s impossible to think of another of the regular artists doing these parts of the story this well.

The switch to Earth and a more normal setting as we drop in on the Sparkler Mini-Bots and Ultra Magnus does however show why he annoys so many people; a straightforward scene of them waiting for the Space Bridge to open and take them back to Cybertron looks somewhat strange, especially the first panel in which they’re presumably supposed to be looking out for the bridge, but instead all seem to be staring into the middle distance with expressions of Dull Surprise.

This is also the beginning of a very odd issue for Ultra Magnus, three weeks after his triumphant arse-kicking of Galvatron he’s suddenly become much more like the early IDW version of the character than ever before, being all stern about the Space Bridge being slightly late and deriding standards for having slipped. As mentioned when I talked about the conclusion of Salvage!, this story is so divorced from the usual Magnus plots (officially they’re going back to Cybertron to get the Wreckers to go beat up Galvatron, this is just a token mention of the wider story though, in keeping with the other UK epics of 1988 this is basically a standalone) he could just have easily been substituted with another prominent Autobot with it having very little impact on the story. This is only accentuated by him being written slightly out of character.

What is nice however is that Magnus doesn’t recall having been to Kalis before, too often for a massive planet Cybertron feels like a small village, Autobase having moved to a new location that’s not well known to the main character is a neat touch. Of course, by the end of this arc we’ll discover another very good reason for this being set on a disposable bit of the planet.

Once back on Cybertron (and the panel of Sizzle half in and half out of the portal is fantastic) our heroes discover the Bridge was operated automatically and Autobase is abandoned and full of signs of a massive battle. Having characters miss the apocalypse and have to piece together what happened for a shock start to the story is a standard trick, with Day of the Triffids probably being the most famous example (after this it would be a major influence on zombie films with 28 Days Later and The Walking Dead stealing its “World ends whilst you’re in hospital” beginning), but it’s a trick that works as the mystery of exactly what happened to Emirate Xaaron and the Wreckers—it seems no one cares about Skater—is well presented.

The reason Present Day Magnus isn't it Time Wars: Someone closed the door.
The reader is of course slightly ahead of the characters thanks to the opening, but this just adds to the tension. We also get an especially nice gag of Sizzle finding a decapitated head that’s very old but hit with recent blaster damage, what none of them see is the fantastically gruesome image of the head coming alive after its been discarded on the floor as they head outside.

On the streets the creepy atmosphere in maintained as the few empties roaming the streets and hiding in buildings ignore the Autobot’s pleas for explanations and run away or stay hidden. This does however continue to show Magnus as off his game, with him reduced to ineffectually hammering at doors and almost crying at no one talking to him. We’re only a short step away from his embarrassing “I didn’t mean to!” death in Time Wars.

Luckily Guzzle still has some sense, and they transform to their vehicular modes (of which the Sparkler Mini-Bots are of course especially famous) and head to the border with Tyrest to see if the phenomenon is planet-wide. Tyrest is of course best known for being an evil Autobot rather than a place these days, which almost feels like foreshadowing in retrospect considering what’s to come. Hmm, perhaps being so close to Tyrest is why Magnus is acting so much like his IDW self?

At the border they find barricades and a group of Decepticons there to try and keep something in. These include the surprisingly-not-famous-for-their-vehicular-modes Duocons, though Battletrap is going to have to sit most of this one out as it’s Flywheels who gets knocked into Kalis and captured during the brief skirmish with the Autobots. Thankfully this scene restores some dignity to Ultra Magnus as he casually brings down Flywheels by whacking him with a massive girder.

Flywheels himself is going to be a surprisingly influential Decepticon, but that’s something to talk about next week as his recovery from being Magnusised sees him desperately warn the disbelieving Autobots about Kalis being full of The Living Dead. Said Living Dead obviously have a nice sense of the dramatic as they chose this precise moment to rise up out of the ground and start attacking our heroes. Even their vehicular modes may not save them now.

Wobbles on Magnus’ characterisation aside, this is a tense exciting issue that is a master-class of economy of storytelling, with not a line of dialogue wasted as everything moves the plot forward in some small way. Furman and Reed are clearly both having a great time here and the fun is infectious. 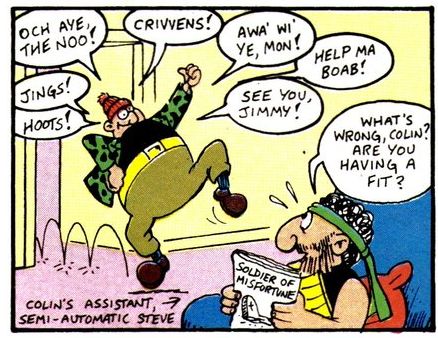 This is a spot on Andrew Turnbull impression.
Interestingly, the “NEXT” box promises Legion of the Lost! next week, I wonder if originally every issue in this story was going to have its own title, or if someone just gone confused as to when the next two parter in the overall adventure was actually starting?

The sidebar on Transformation is entirely given over to promoting the various artists whose work we have been and will be enjoying on the book. Lee Sullivan; Dan Reed; Jeff Anderson; Robin Smith... even inker Dave Elliot gets a mention as a major new talent. Suspiciously absent however is the name Jose Delbo, which again shows the divide between the home-grown and American material.

On the letters page Grimlock gets a letter from Paul Addleton of Bedworth asking a question he’s obviously been anticipating for some weeks: Why was the Seacon Overbite called Jawbreaker in Enemy Action!? Grimlock’s response is that Jawbreaker had his name changed by Shockwave when he came to Earth, but everyone still thinks of him as Jawbreaker. The closing comment of “You kids buy that? Sheesh—you’re obviously more gullible than I thought!” is unusually snarky for an attempt to cover a goof and suggests Furman wasn’t too happy about it (and the letters it would bring) either.

Interestingly, until this letter was discovered the general assumption online was that the Overbite toy had just been called Jawbreaker in the UK. This instead suggests either Marvel UK were sent wrong/outdated information, or that it was a straightforward SNAFU.

Robert Spalton of Leeds becomes the first person to offer up some Action Force questions, the majority of which are focused on Rip Cord. Grimlock’s response to a question about a Rip Cord Intelligence Profile—“If space permits we’ll try to bring you a few Intelligence profiles on Action Force and Cobra Personnel. Don’t hold your breath, though”—shows the rather apathetical approach to the new backup of the editorial team.

Speaking of Action Force, the third part of The Battle of Springfield is mainly a quiet bridging issue, though the scenes of Cobra cheerfully blowing up parts of the town to cover their escape are rather good fun. Poor old Doc has clearly been scared white by the lead strip though.

Combat Colin Meets the Loch Ness Monster starts this week, he doesn’t get as far as meeting the two-time Doctor Who villain, but does get to slap on a kilt and throw in every possible Scotch cliché. My favourite gag though is a sight one about Semi-Automatic Steve’s magazine being called Soldier of Misfortune.

Next week, Magnus finds himself a real soldier of misfortune as the zombies get their teeth into the fight. 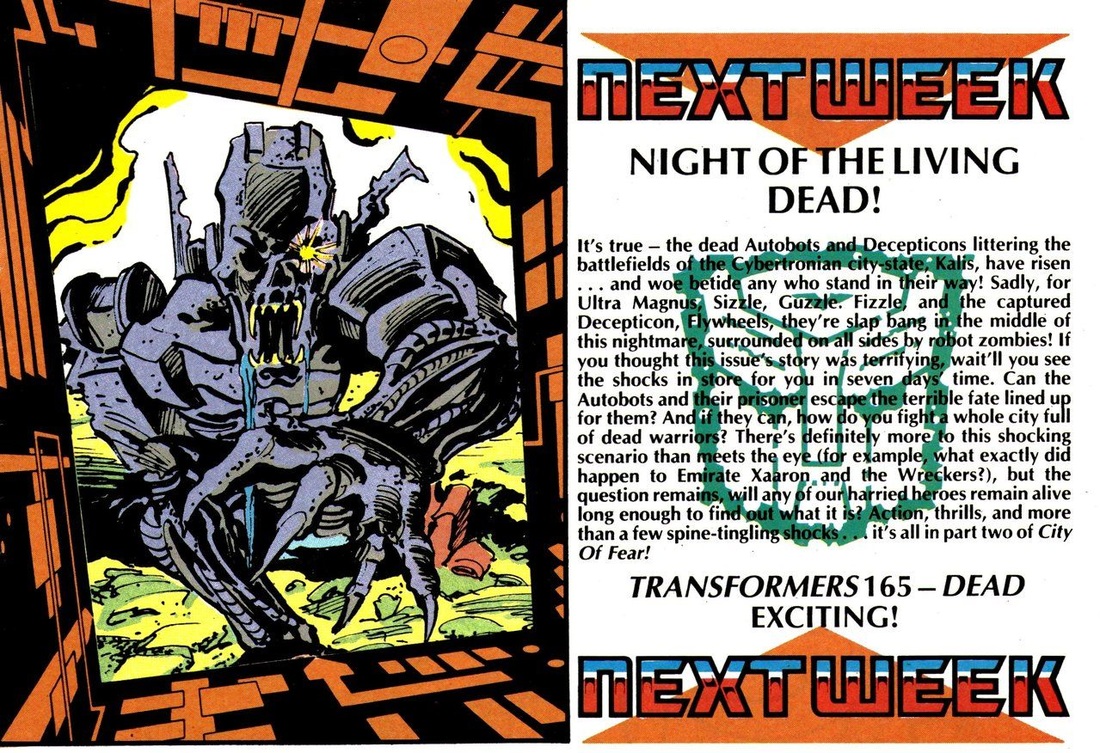