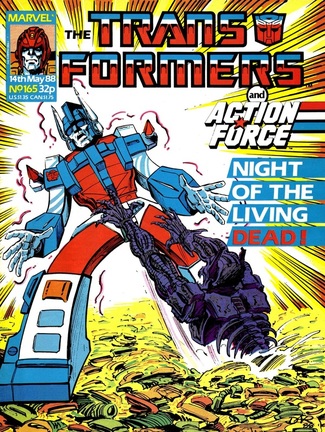 
Perhaps we should show these poor creatures some mercy!


The cover is Dan Reed at his wibbly wobbly finest; the look of fear on Ultra Magnus' face as the hideous zombie thrusts out of the ground and grabs at his genitals is perfect in every way. It is however perhaps a tad misleading as to the contents within, though this is well remembered as an out and out horror issue only the first half is given over to zombie escapades.

The opening page delights in the horror content, slowly drawing out the tension as crawling, grabbing zombie robots rise up out of the earth, with the page topped and tailed by the shocked expressions of our heroes. It's slightly different to the fast paced emergence that made last week's cliff-hanger, but the mood it creates is excellent. Even the one moment of comedy as Flywheels quotes Penfold ("Oh eck!", amazingly despite Furman doing this at least twice over the years it has never made a list of Furmanisms) is perfectly timed and manages not to undermine the drama.

This effectively sets the tone, as the following fight nicely balances horror, humour and action. As Ultra Magnus and the Sparkler Mini-Bots take thing seriously and try to deal with their situation it's down to Flywheels to bring some Joe Pesci in Lethal Weapon style comedy to proceedings as first he tries to bargain for his gun and—when that fails—cheerfully assumes his tank mode to blast zombies.

He only wants a hug!
This is where, in retrospect, we can see what an important character Flywheels is in the evolution of the comic. We've had Decepticons that can be described as "honourable" in their behaviour, most notably Ravage in his team up with Windcharger way back in Raiders of the Last Ark! We've also had fun Decepticons, such as the entertainingly camp Straxus. Flywheels is however, the first that can genuinely be described as "likeable".

He's basically a cheeky scamp, not even slightly hiding his disdain for the Autobots but at the same time cheerfully wisecracking about everything. In the current comics the Decepticon more usually written like this is Swindle, but it's something we'll gradually be seeing a lot more of in the years to come and it helps to blur the line between straight up Heroic Autobots and Evil Decepticons. Things are going to get a lot more grey from here.

What's especially impressive is that Flywheels maintains his charm even after rather brutally declaring he doesn't care the zombies include Autobots and that he has no qualms about killing "Your kind". This is helped by Magnus and the Sparklers responding they feel the same way about Decepticons. Again the lines are blurring, and though the humour in this confrontation is played up it's incredibly rare for characters in this comic to actually use the "K" word.

Flywheels is also helped by Furman playing him as more than the comic relief, he's smart enough to work out they should use the weaponry in their vehicular modes (no doubt you're expecting me to keep up the gag about the Sparkler Mini-Bots' famous vehicular modes. Well, there you go) and comes up with the key to unlocking the solution to the whole problem. This stops him from falling into the trap so many comedy sidekicks stumble into of being a fifth wheel as far as the actual plot is concerned.

The scene of the Sparkler Mini-Bots cheerfully setting fire to zombies with their exhausts is given some extra bite when Magnus realises these are Autobots, they're massacring their own side. His disgust at this and his order to stop killing the undead is perhaps slightly pat morality (fighting back against zombies trying to kill you shouldn't be an issue even if they were former friends), but the suggestion he didn't give a toss about these poor victims when he thought they might be all Decepticons is another grey area. Sadly though his character beat for Magnus will be rather oddly contradicted later in the story. 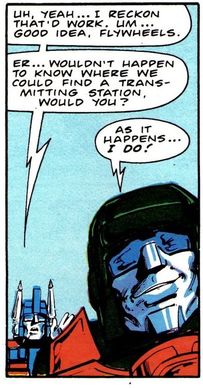 Flywheels: Hero of the day.
As everyone regroups back at Autobase the plot shifts to one that focuses more on paranoia and trust, not to mention plot mechanics. Magnus has worked out the zombies are being remote controlled by a signal (the idea you can do this to a Transformer without a brain module goes all the way back to The Wrath of Grimlock!), but it takes Flywheels to point out all they need to do is block the broadcast, and that the Baird Beaming Transmitter is nearby.

This is where the issue of trust comes into things. With the Sparkler Mini-Bots leading the zombies on a merry chase, Magnus needs someone to watch his back at the transmitter (which has a strange name for a building on Cybertron, it seems to be named for the inventor of television, John Logie Baird), can he trust Flywheels not to just shoot him in the back once the zombies are deactivated?

The situation is slightly contrived—why not just send Flywheels with two of the Sparkler Mini-Bots and have the other as Magnus' wing man?—and of course Flywheels comes good in the end. We do get a fake out "Flywheels looks like he's going to shoot Magnus but is in fact aiming at a zombie" moment (and that's at least the second time Furman has played that trick, yet it doesn't seem to be on the Furmanism list either), but ultimately he winds up the most useful character in the story.

We then end with the lead into the next part of the arc, as Magnus declares he's worked out the signal has come from beneath the surface of Cybertron itself! Despite some nicely over the top posing from Reed, it's not the most dramatic of cliff-hangers, especially considering we had killer zombies last week.

This is a fantastic issue that rams an amazing amount of plot, action, humour and terror into 11 pages, topped by what is the easily the peak of Dan Reed's time on the book. Throw in Furman on the top of his game and you have one of the very best issues in the series.

Pleasingly for a story that shows the writer at his best, Transformation promotes his first big non-licensed gig and the launching point of Marvel UK's attempt to create original American style comics. The editor (one S. Furman) is clearly more excited by Dragon's "Teeth" (as written by one S. Furman) than he is by the very quickly mentioned Action Force Monthly. This will be out by the end of May, and I'll be talking about it in depth with an Addendum next week.

Grimgrams continues the disdain for Action Force as Grimlock responds to the excitement of James Owen from Selby with a rather sarcastic sounding "Even I am surprised at how popular Action Force has proved to be amongst you kids". He also assures Alastair Waldon from Earls Barton that Inferno and Hot Spot don't actually have the same motto ("The hotter things get, the more I like it"), despite what the tech specs claim and next issues AtoZ will reveal what Inferno really likes to say.

Action Force concludes The Battle of Springfield, with Cobra successfully evacuating under the command of Serpentor, leaving Action Force looking as if they've blown the shit out of an innocent town. The highlight though is the final page shock reveal of Zartan's never before mentioned sister Zarana. This lets Hama unleash his inner soap opera writer and gives the series another character alongside the Baroness that can be the focus of slightly creepy lusting from the male fans.

Combat Colin (sadly never lusted after by anyone) makes it to Scotland, and rather nicely Lew Stringer has clearly put a bit of effort into researching the myth of Nessie as Colin recounts its history. We actually get a more impressive cliff-hanger than in the lead strip as the monster looms over our heroes, much to Steve's terror.

Next week, it's a big one. We're halfway there, at the exact midpoint of the comic's 332 issue run. Let's hope it's a good'un. 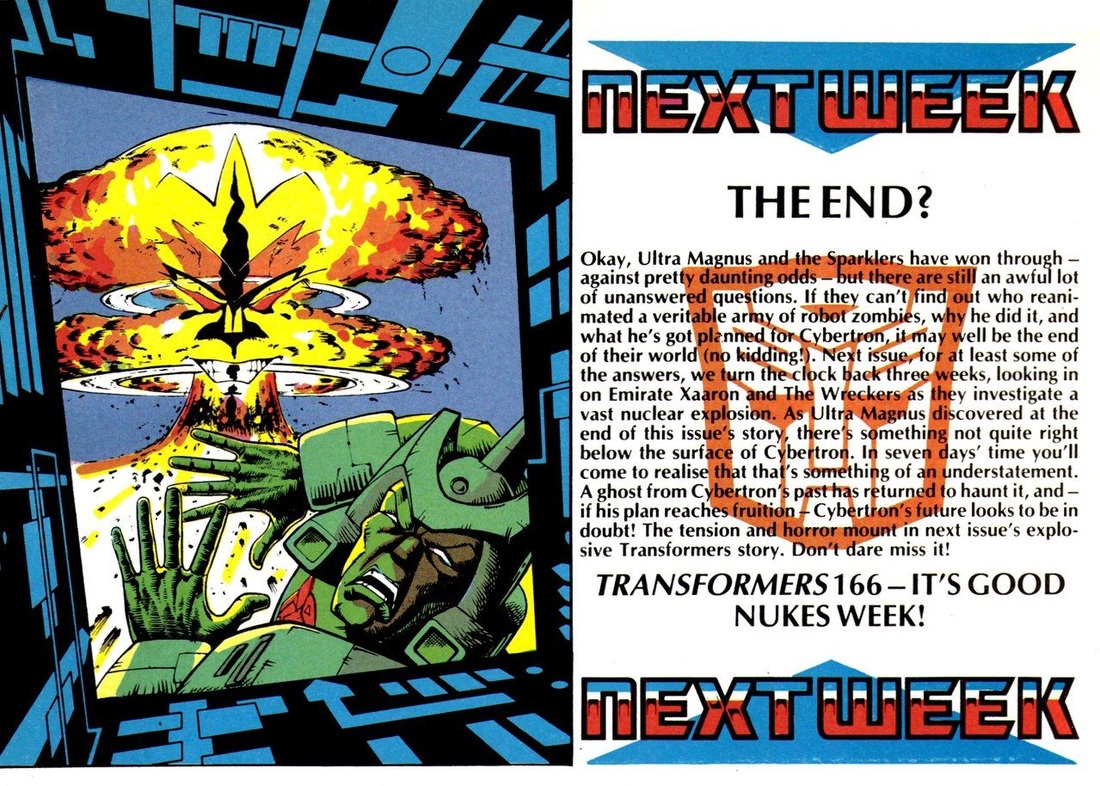