Don't Get Me Wrong. 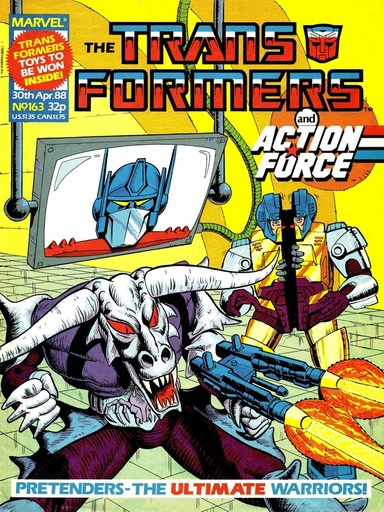 "Commander Scorponok said we would surprise them!"

"Now isn't the time to be recalling the words of that microbrained moron, Submarauder!"

"Pretenders--the ULTIMATE Warriors!" screams the cover byline. But what's more telling is how Landmine looks above it, staring sheepishly out of his shell with a look of blind panic on his face as if he realises he is indeed not an ultimate warrior but a terrible, terrible idea. Having Optimus Prime stare down at him from a television with a Lee Sullivan square jawed look of disdain can't be helping with his self confidence issues.

On the other side of the cover you have a bow legged Skullgrin who has a look of joy on his face that suggests he too knows he's a terrible idea but he just doesn't care because at least none of the readers are going to forget what he looks like. This so perfectly sums up how the Autobot and Decepticon Pretenders will be treated by the writers and readers alike, you might almost think Sullivan was a psychic who did it on purpose.

Inside, we continue the parallel Real World/Computer World plots, but with the emphasis very much on the former this week. I'll talk about that side of things first so as to end this piece on the more cheerful part of the plot that doesn't read like an extended resignation letter from Budiansky.

On the Steelhaven Highbrow has gathered his six volunteers (three available on UK shelves) and prepared them for the same process the Decepticons have undergone. The speed with which he does this is often held up for ridicule, but considering we'll be meeting various Pretenders created prior to this it's easy to assume this is a technology Cybertronian science has been on the brink of cracking for some time (and that various groups have created without Scorponok's knowledge), even if the length of time Thunderwing will turn out to have been around for is really pushing it. The only really unlikely bit is the Autobots happening to have some of the organic goop to hand when the Decepticons had to go out and steal what they needed.

It also has the bonus of containing a nice idea reaffirming the alien nature of these robots as Highbrow directly downloads the information on the Pretender process into his mind via the Optimus program. It's only a small detail but it's the sort of non-toy gimmick related world building we haven't really seen from Uncle Bob since the idea of Memory Banks. 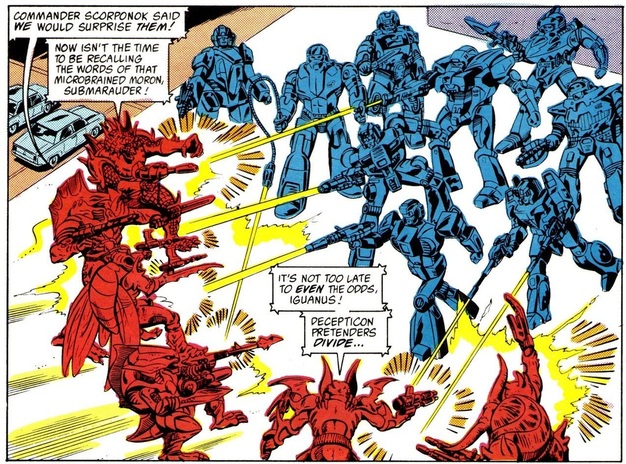 Half a page with not a single character in their actual colours.
What is telling however is that the new Autobots get a similar "Everyone lined up as someone says their names" introduction the Decepticons received last issue. Only there this was done after they'd gotten into their shells, which makes sense as that's how they'll be appearing for the bulk of their time on-page. The Autobots however are named before they get shelled, meaning it's going to be a real bugger to tell which one is which going forward. It's unusually sloppy for Bob considering he has this sort of introductory scene down pat now, adding to the sense of an author not deeply invested in his job.

Thanks to the Prime side of the plot, the Decepticons leave the factory to go attack the source of the computer bug. Their attack on RAAT troops (making another appearance! Someone needs to update the wiki) shows how useless the idea of Pretenders as disguise actually is. The humans are briefly surprised by seeing monsters instead of robots, but quickly start trying to fight back with typical RAAT success (i.e.: None at all). They don't even get onto the Tortuous Acronym Military Group Union to find out if they're allowed to fight anything other than robots.

This is emphasised when the Decepticons arrive at Ethan's factory: Cloudburst is as briefly surprised as RAAT to see Decepticons that look like monsters, until Landmine points out that's the idea. The Decepticons are more fooled by the giant humans, but this lasts all of five minutes before the Autobots reveal themselves (not like that, minds out the gutter), rendering the whole double disguise gimmick moot.

Incidentally,  the 'cons falling for the giant humans trick is often held up as a flaw, but Scorponok's crew have only recently arrived on Earth and all of the space based tales we'll see will establish most humanoid aliens are on the Transformers size scale (which makes sense, Primus created them to be able to interact with the galaxy). Their assuming this species they've not paid a huge amount of attention to also comes in "Normal" sizes is actually one of the more sensible ideas in the issue.

What follows shows exactly how contemptuous of the entire Pretender idea Budiansky was. The Autobots are completely and utterly useless, their entire strategy is dependent on advice from Optimus Prime (who is having to give it whilst carrying out his own mission), even when that advice is as straightforward as “Shoot that Decepticon standing behind you”, when he’s briefly cut-off they go to pieces within seconds. If you were being charitable you could say this is meant to show how brilliant Optimus is, but instead it makes you sympathise with his desire to stay in the computer, the Mechabots can’t be that incompetent.

The Decepticons do slightly better as at least they have the excuse of being caught by surprise; however Submarauder declaring the person who created the Pretender process a “Moron” does however feel like a barb aimed more at Hasbro than Scorponok.

We do get one actually useful application of the shells, as they can act independently of their owner they effectively double the fighting force of a Pretender team. However, as both sides are evenly matched this is an almost entirely useless advantage in this case. 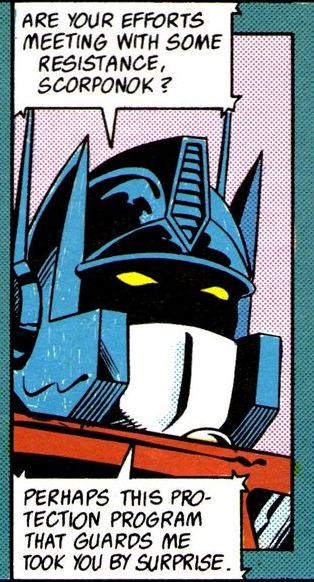 BLACK FACED PRIME WANTS YOUR SOUL.
The art doesn’t help; however well he does elsewhere Delbo clearly struggles with the fight scenes, with them being a visually confusing and un-dynamic mess that probably would take the wisdom of Optimus Prime to follow. Add in Nel Yomtov’s block colouring working against telling almost identical characters apart and the resulting sequence makes it hard to pretend the introduction of these characters works.

With the supposed purpose of the issue a massive failure, it means Optimus Prime has to save the day in more ways than one. He goes back into the Decepticon computer in order to lure Scorponok into the virtual world so he can follow Prime back to Ethan and know where to send the Decepticons for the trap.

This sequence of Prime in a simulated battle with the current Decepticon leader is of course a deliberate parallel of Afterdeath!, even down to the visual of Scorponok being plugged into the computer via wires in his head. It’s a nicely understated idea, allowing the reader to spot it themselves without any awkward “This is familiar!” dialogue. Here Prime is confident, in control and running rings around his opponent in a way that almost feels as if it’s refuting the ending of the previous story. It helps to add to the idea that Optimus is much happier out of reality, leading to the cliff-hanger of him cheerfully declaring he’s looking forward to the next game despite Goldbug’s best efforts to remind him of his past.

Delbo also does better with this side of things, clearly having more fun with the chance to go a bit nuts with the surreal visuals than with the big fight. However, for some reason he makes Prime’s face above the mouthpiece an absolutely terrifying void of blackness.

The two sides of the plot remain as respectively strong as they were last week, but with the emphasis switched to the Pretender side of things the overall quality takes a total nosedive. As a complete story that makes for a rather average adventure, with the Pretenders being an almost total failure as characters and concept. Luckily both authors will be ignoring them for the immediate future, but it does deliver a rather heavy blow to the book to have such mediocre non-entities be presented as its future. 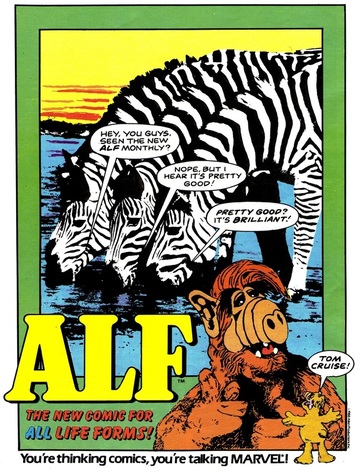 I went for this as it's mental.
The rest of the comic is full of things that would make for a brilliant “Not strip related” image for this blog. Most relevant is a competition for Pretender toys where you have to identify which sub-groups three characters belong to out of six options. This is trickier than it looks as Scorponok may not be a New Leader, but he is a new leader. The blurb sounds slightly resentful about the number of special groups running about in the comic now, you can almost hear the sigh after “Over the years we’ve introduced quite a number of different types of Transformers”.

The big news of the week though is ALF. America’s answer to Roland Rat is getting his own monthly comic, which not only gets a slightly odd advert of zebras talking but “he” also introduces on the Transformation sidebar. The American comic lasted 50 issues; a quick Google doesn’t show how many the British version lasted before it was folded into The Marvel Bumper Comic, but considering ALF seems to have been less popular over here than in America I suspect it wasn’t anywhere close to the same number.

Grimlock receives some help from attentive readers this week. Firstly, he’s been sent a lot of pictures of Trypticon and Sky Lynx toys to confirm they’ve definitely received an official UK release rather than bootlegs/imports. It is somewhat worrying he’s had to go down this route to get the information and again suggests Hasbro UK have rather taken their foot off the pedal at this point.

Secondly, nearly two years after Grimlock first mentioned a cartoon sequel to the film, Mark Alexander of Aberdeen reveals that season 3 is now being broadcast on “SKY channel’s Fun Factory”. However, this doesn’t impress Grimlock due to satellite and cable still being a very niche thing at this point in the 1980’s.

Action Force suffers from some rather poor re-lettering to change “G.I. Joe” to “AF” and to correct the various American spellings. The most notable thing about this instalment is Snake Eyes getting better from being dead.

Combat Colin sees off the Gwanzulums by unleashing his Auntie Mable on them. She so smothers the “Cute” aliens with kisses they run away, though as a sign of the overall Marvel UK plan they do promise to return. This has been a rather fun little story, and it’s to the editorial teams’ credit that a half page comedy strip was allowed to join the crossover and effectively send it up.

Next week: The scariest Transformers comic this side of the words “Written by Mike Costa”.

And as I'm writing this I've learnt of the death of yet another hero of mine. RIP Patrick Macnee. 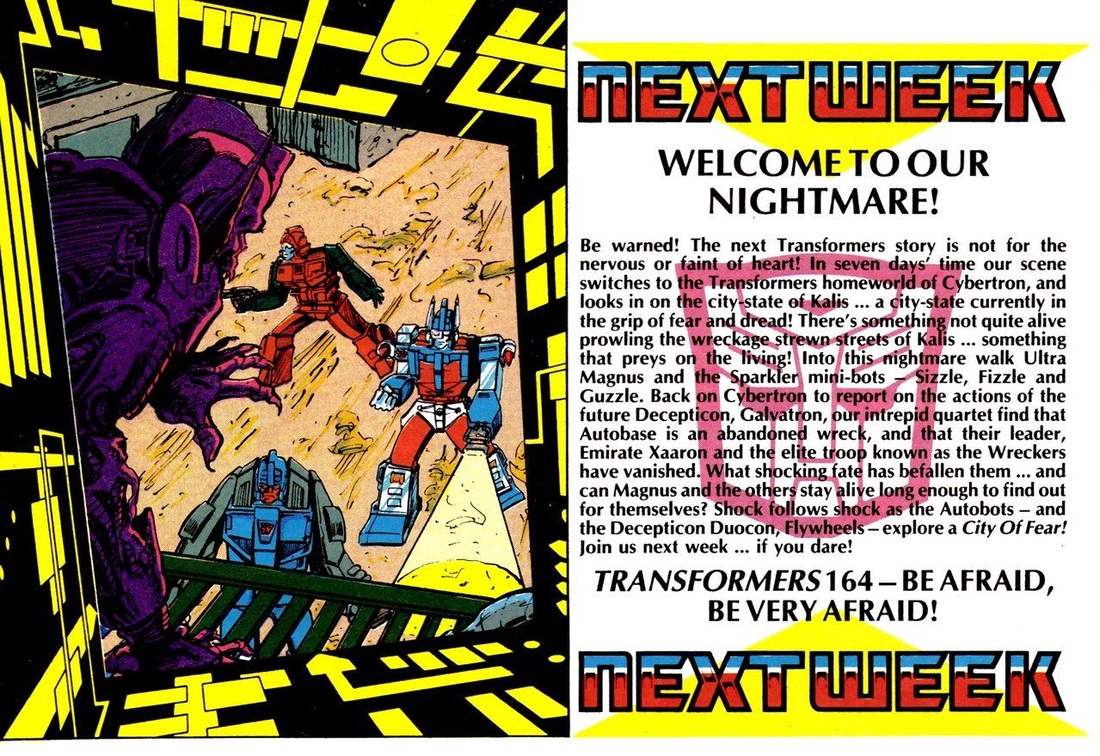