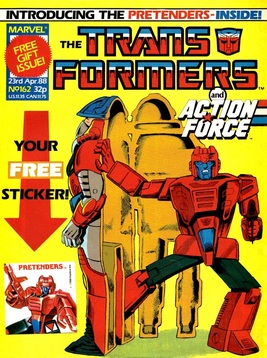 Some game players are sorer losers than others, Ethan Zachary.

This issue is strangely placed in terms of the wider UK comic, a one-off American story presented in the midst of what would otherwise be a lengthy run of British issues. This has clearly been brought forward from its natural place after issue 174 so as to tie in with the release of the Pretenders in this country.

This tellingly means the robots in disguise in a disguise are the first major new toy subline not to get a special British story giving it a push. Considering the quality of those the Special Teams and Masters received this could arguably be a good thing, but it does suggest a severe downscaling of the amount of effort Hasbro UK are putting into the line.

Or, considering the Micromasters (the last new line to be introduced whilst the comic was still doing original British material) got a special introductory story in addition to the American, it might just be the case everyone thought the Pretenders were a terrible idea and that it was best to ignore them.

Either way, the only real effort to push the new gimmick is the free sticker of Cloudburst's toy art, as he also gets the odd looking and undramatic cover someone must have been a fan. This is a shame as one of the monster Decepticon shells would make for a much more impressive cover star than a weedy red robot posing by an open shell you can see more of the inside of (this is also one of the few times a shell will be shown opening the same way as the toy—down the sides rather than middle). 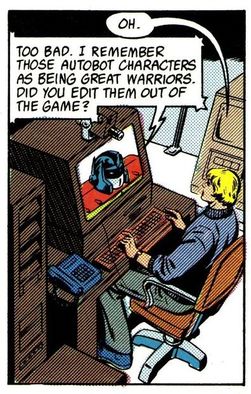 "Mind, that game where we went to a rock concert, what was that all about?"
Most of my thoughts on the Pretender gimmick itself and the non-entities the bulk of the first wave will be are going to have to be saved for next week. This is because—and it’s rather a sign of how the timing of this hasn't quite been thought through—the Pretenders don't actually show up until three pages before the end, and only get their shells on the last page. As a major push for these new toys this rather makes the issue a failure. But what fills up the bulk of the issue is much more interesting.

Yes, with a new Optimus Prime toy coming it's time to set up his return by revisiting Ethan Zachary, now filthy stinking rich thanks to setting up a successful computer game company: Alternate Reality Inc. Doing this now, in an story that already has to introduce 12 new characters is arguably over stuffing the comic and certainly shows Uncle Bob would rather be writing about anything other than Pretenders. But it also makes for rather a blessed relief.

The subtext here is very telling. Optimus Prime’s mind is alive and well and living in Ethan’s computer, but doesn’t realise he’s not a game character and doesn’t want to come back to reality. Budiansky has always preferred slightly more off the wall heroes than the pureblood Optimus Prime—hence some of the wackiness we’ve had over the last year—and this feels like a commentary on how he’d rather not bring the character back. However, the advantage is this means Prime’s return will not be easy, and this exploration of what it means to have a mind that works like a computer is better thought through than the “Committing suicide over a computer game” moment we left this plot on.

As an aside, it’s nice that Bob has put a bit of thought into why Ethan has waited so long to get in touch with the Autobots: He’s only just been able to retrieve Prime’s memories of his old life (even if Prime thinks that was just a game), enabling him to now send a message at the Ark and—when that fails—to know he needs to look up the name “Witwicky”. 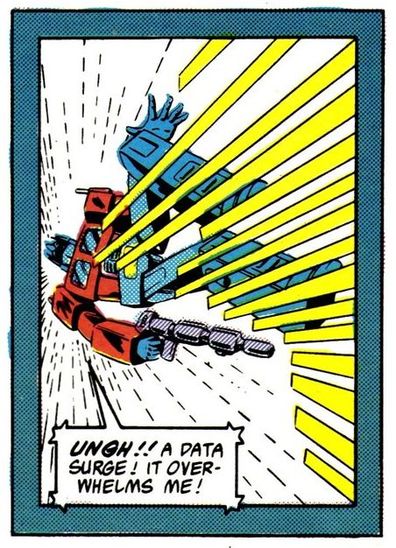 "In-game" art, complete with special border so readers can tell the difference between this and reality.
As with Afterdeath!, a lot of the issue is given over to a Tron homage, and as with Afterdeath! the complete lack of resemblance to how 1980’s computer games really worked doesn’t bother me in the least (though despite being richer Ethan has downsized to a more realistic screen size), watching Prime fight it out amidst Midnight Resistance style graphic would be incredibly uninteresting. It’s also pleasing that the opening scene of Prime leading the Mechabots against the Bombasticons (Ethan is like a Third Party developer) isn’t just for the sake of a cheap “Prime is back!” shock, it establishes the rules of how the game world and its visuals work in a way that’s important for the second half of the issue.

The following conversation between Ethan and the now very literal Prime (“This is getting nowhere!” “Is there somewhere we should be getting?”) feels like Michael Knight and KITT, and is rather good fun as it shows Optimus is actually happy playing and would rather think of these “Autobots” Ethan keeps going on about as relics of an old game. It won’t really be explored, but the implication is that he dealing with the trauma of death by going into complete denial.

With the Ark a no-go, Ethan programs his computer to call every Witwicky in Portland. On the surface this seems easy (it’s likely they’re all related to Buster), but considering Sparkplug is stuck in a boarding house and therefore presumably not in the book that’s impressive and/or scary. This week Sparkplug *Rolls Dice* hates all Autobots and therefore won’t help Ethan and his friend “Op”. This means we get a tortuous recap of Sparkplug’s entire life, but it is one of his better moments in the comic and nicely shows how messed up his world has been thanks to the Autobots.

Luckily Spike has bugged his dad (which is also impressive and/or scary), but as Fortress Maximus is still being repaired it’s up to Goldbug—as the only person aboard the Steelhaven who knows Prime—to go and find out if the human’s claims of having Optimus are true.

Yes, in the closest thing we’re going to get to resolution to that plot, Goldbug (now, based on the art, with a retractable hood. Either that or Delbo keeps forgetting to draw it) has been rebuilt. The other Throttlebots will be even less lucky, only showing up again when it's time for them to die. Goldbug’s return does at least lead to a nice moment of awesome when he declares to Ethan “I am Goldbug human. And you, I believe, must be a psychic. You claim to talk to the dead”.

As close as you get to seeing a Pretender before the last page.
Goldbug and Ethan hit upon a plan to shock Prime into remembering his past by setting him against the Decepticons. Luckily Scorponok’s crew (hilariously one of the ways Ethan tried to jog Prime’s memories was him showing a newspaper picture of the Decepticon Headmasters. A group of characters Prime never met and has no idea of) have raided a genetics research lab. This brings us to the actual purpose of the comic: The introduction of the Pretenders.

Scorponok is in his full on mad scientist mode here. It’s generally regarded as his least interesting characterisation—though for some reason Furman decided to bring it back for ReGeneration One—and it is incredibly one dimensional to see him standing in front of six never seen before Decepticons and shouting at people who already know what he’s doing that “Flesh and metal are mixing together in a manner unimagined by all but ME! Only my GENIUS has made it POSSIBLE!”, there’s nothing like self belief is there?

The thinking behind the Pretender shells is also completely mad. If it was just armour (as it was in IDW), that would work fine. If it was a way of passing in disguise amongst robot hating organic species as it will be in several later issues, that would also work fine. Instead Scorponok seriously thinks giant evil looking monsters are good enough disguises to completely fool the Autobots. We’ll see how well that works next week. For now, suffice it to say that, with the exception of Skullgrin, for every one of these Decepticon just standing there having exposition delivered at them by Scorponok will be the highlight of their time in the comic.

Meanwhile, Optimus does the Tron thing and infiltrates the lab’s computer, fighting off its virtual defences and stealing the secrets of the Pretenders. It’s a fun sequence, but does lead to him declaring they need six volunteers of their own, especially as the Decepticons have traced his return and will be coming. Luckily there’s enough spare bodies on the Steelhaven to avoid the creation of a Headmaster Pretender, but that does mean the exciting cliff-hanger is Goldbug putting in a call to the ship. As Transformation boasts, the strip is actually 12 pages instead of the usual 11, presumably so the Pretender shells can appear properly on-page in the issues that boasts of their introduction on the cover. That’s a shame as the previous page, with Prime escaping out from Vorath’s firewall back to Ethan’s computer, would have made for a more dramatic ending.

The Prime stuff is actually great fun and Delbo is clearly having a blast with the virtual world. If not for those last few pages this would be top notch Budiansky, but things are about to get very strange.

"Ignore the other six guys!"
Transformation is in the odd position of having to promote the Pretenders, but at the same time having to be careful to point out half the characters we’ll be meeting won’t actually be released in the UK. Oh the vagaries of toy promotion.

On Grimgrams, David Place of Driffield asks the obvious question of how there can be Seacons when issue 127 established Transformers haven’t heard of water. Grimlock explains that there are seas on Cybertron, just not H20 ones. Elsewhere, David Whitehouse of Kettering helps “Grimmy Babes” with a question in issue 153 about Transformers computer games by giving a very thorough history of the Ocean and Activision games from 1985 and ’86 respectively. There’s a future Wiki editor there no doubt.

Action Force returns to its regular plot with the first part of what was originally the 50th issue of G.I. Joe: The Battle of Springfield! In the context of the original series seeing so many of the characters—a lot of whom hadn’t done much for a while—team up for a massive fight is actually quite exciting, but that rather loses some of its impact here. Other than Serpentor making a surprisingly good showing for a character Larry Hama hated (dragging a wounded trooper to get medical aid) the most interesting thing is the year in a line of Stalker’s dialogue being changed to “1988”, to try and convince us we’re lot a good way behind the American printing.

Combat Colin continues to fight the Gwanzulums, with them shapeshifting into a tank that destroys the Combat Tank. This leaves him asking if they could turn into a couple of hospital beds. I love just how devilish the aliens look here. The Pretenders could learn a thing or two about disguise from them as well.

In exciting news, the final draft of the book version of the site has gone to the editor for formatting. This is very close now. It’ll also have some nice illustrations by Andrew Turnbull inside it as well.

Next week, who are those giant humans? 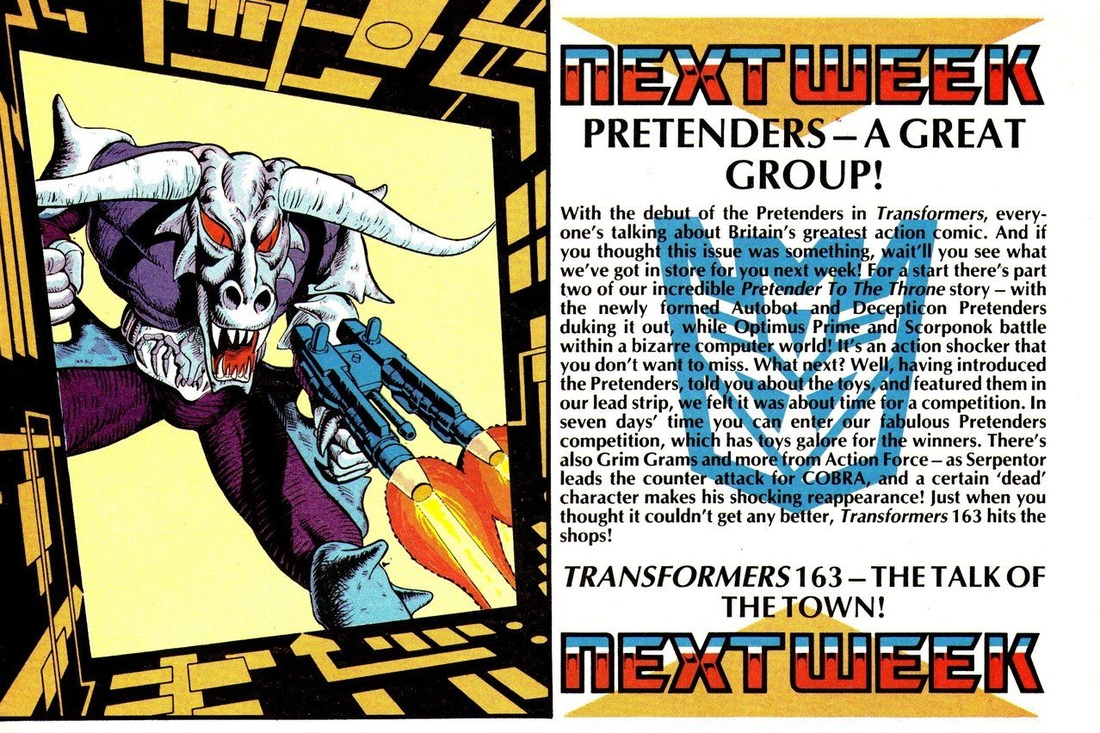