You Were Always on my Mind. 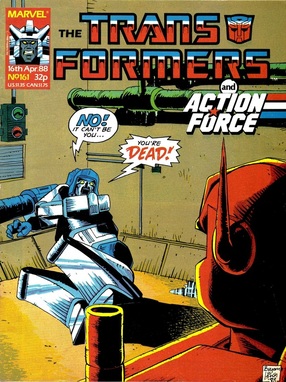 
Before delving into the story itself, I should probably start by talking about the cover. In theory it's about shocking the reader into thinking Optimus Prime has returned, thereby making the comic an irresistible purchase. It's a smart moment to do this:  the comic has already hinted Prime will be back and this comes just after the VHS release of Rebirth, which comes complete with the very much alive Optimus Prime hanging about with the Headmasters (without explanation as The Return of Optimus Prime has yet to make it over here). It's a bluff that could work better at hoodwinking readers now than at any point in the last year.

The word "could" is used there as Prime is block coloured and has his back to the viewer, with the eye being drawn to the mad and screaming Megatron on the left you might not immediately notice the Greatest Autobot of Them All has returned. That slightly delayed "Oh yeah" reaction clearly isn't what the book was aiming for-- Transformation assumes readers will be wetting themselves with excitement--making it a rare dropped ball from Bryan Hitch.

Inside we see Furman playing with the narrative in a way he first did all the way back in The Enemy Within!, as we have two narratives running in parallel to each other that sees the actions of two characters mirrored; complete with one page split down the middle between the two (though it doesn't form the cliff-hanger this time). He managed it extremely well the first time and with three extra years experience under his belt it's hardly surprisingly that this is structurally a very strong issue, with the two threads flowing back and forth in a neat and organic manner.

An example of the mirrored art on the "Half and Half" page.
We do have a residual problem created by the need to include Richard Branson last week though, because when taking the story as a whole it's bizarre that a major plotline of the second half wasn't even slightly hinted at by the first.

We'll deal with the half of the issue that does follow on from last week first as it's by far the weakest. Ultra Magnus completely gives up as a result of having constantly been defeated by Galvatron (just like he did on the volcano); the famous for their vehicular modes Sparkler Mini-Bots valiantly try to stop Galvatron without him (just like Goldbug); Magnus decides it's better to die on your feet than live on your knees and beats Galvatron off (minds out of the gutter).

This rehashing is made even more noticeable by this plot not only being done by the previous Magnus story, but by this being a direct sequel that expects the reader to remember it. Magnus' crisis is handled much better here, with the months trapped in lava creating a more credible and memorable breakdown than him having a bit of a cry in front of Goldbug. Out of the two this is the story I'd rather keep, but it doesn't change the fact it's treading water with repetition. 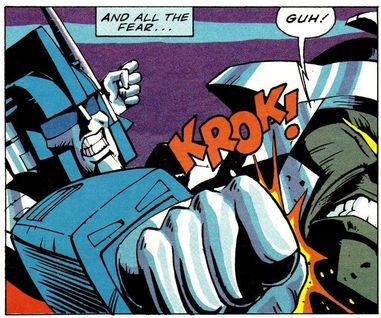 "How dare you say we've done this before!"
Famously this strand ends with a massive piece of foreshadowing that never gets paid off. Magnus declares he's now ready to take down Galvatron and the next time they meet will be the last. This is technically true as the 2009 version is in Time Wars and it is the last time he meets Galvatron. But it's an almost mute cameo where he's seemingly killed by characters supposedly on his side in the Autobot/Decepticon team up whilst apologising in the most pathetic way possible. As a payoff to the story started in Target: 2006, underwhelming is not the word.

Furman is on record as saying greater things were planned for Magnus, but the influx of new toys and the book teetering on cancellation meant a drastic change of plan. Whilst I can see why Furman would make the final fight between Galvatron and Optimus (if nothing else kids would have been clamouring for it), there's enough irrelevant froth in Time Wars that could have been removed to make room for a better role for 1989 Magnus-- hello Highbrow-- to make this hugely frustrating.

To make things worse, Magnus has been so linked with this storyline that the present day version's remaining appearances will feel unconnected to him. He's in the next two British stories but only as an all purpose Wrecker with inconsistent characterisation (is he against killing zombies or upset none were left for him to finish off?); it might as well have been Roadbuster in the same role. This is effectively the last real appearance of the character and that's a shame. 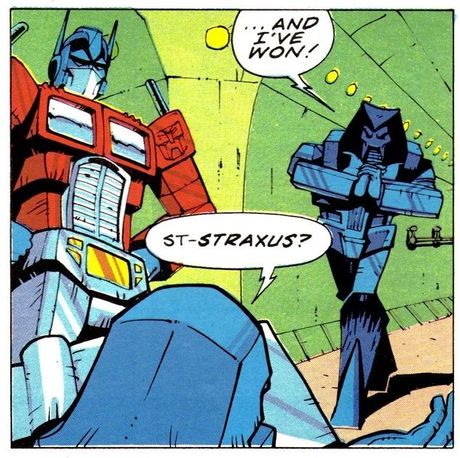 "Camp? Moi?"
The other half of the plot will also be a dead end, but is much more fun. As a result of the PSYCHO PROBE Megatron enters a mindscape where his confronted by his worst nightmares: Optimus Prime and Straxus.

Megatron's complete fear at the sight of the strong and bold looking Prime nicely picks up from the last time he actually got to display some personality in Gone But Not Forgotten!,  but in retrospect it's his speech before running into Prime that really stands out. Megs declares he's let madness consume him and it's time to get back on track with his life and reclaim all that was his.

This is blatantly Furman having a go at how the character was written by Budiansky towards the end, but it also sees him set up store on how he'll be handling Megatron. The need to get back to basics and the disdain for not only his prior madness but that shown by the other Decepticon leaders he'll be meeting will be a recurring motif of the remaining colour British stories. This will be the best and most sustained bit of character development Megatron will have in Marvel. Indeed, it'll remain the best work he'll receive until James Roberts gets his hands on him. Which makes what happens in the end all the more disappointing, but that's another story.

The surprise reappearance of Straxus is extremely well done, with the gleefully camp Decepticon having a ball walking through Megatron's mind and ripping apart the Optimus Prime hallucination. This whole sequence is nicely prescient of the scenes between John Crichton and the Scorpius living in his head in later Farscape episodes and just as much fun. The idea of Megatron having a bit of Straxus left in him from the botched mind swap is a nice one and it's a shame what will happen in the end. But that's... A recurring theme of this piece.

Things end with Megatron besting Straxus in their mental struggle, but all this does is allow Shockwave to PSYCHO PROBE him and make him malleable enough to set on Galvatron. The two versions of the Decepticon leader are now on a collision course and unlike everything else in this story, this will get a decent payoff.

Despite the flaws created by knowing what's to come, as an issue by itself there's a lot of fun to be had here. The Magnus and Galvatron fight is nicely handled and Straxus is, as ever, a joy. Lee Sullivan also continues to excel on art, the gloriously camp way Straxus claps his hands together as he appears is the first panel that feels uniquely Sullivanesque and is quite wonderful. 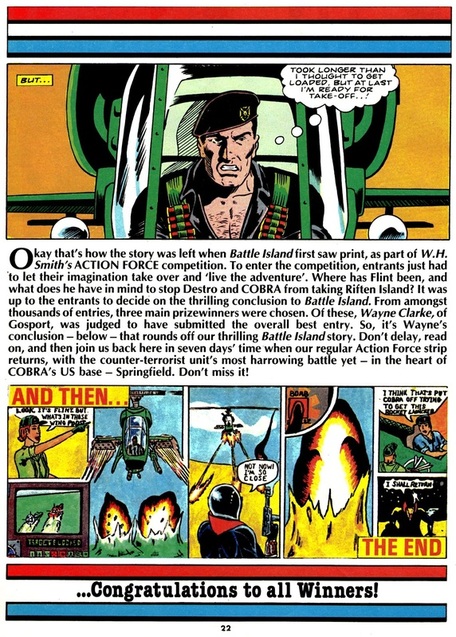 Wayne's conclusion.
There's no Grimlock this week as the extra space is needed to take care of some housekeeping left over from the collapse of Action Force as we get two special strips originally intended for that weekly.

The first, Road Safety- From the Air!, is a public service announcement produced with the "Help of the Department for Transport". Ian Rimmer's script sees Lady Jaye ("From Action Force!" as one kid helpfully points out) and Flint make up for the former nearly running down some children whilst riding her Silver Mirage by taking them up in a Dragonfly to show them how dangerous roads can be. It's the sort of thing that's easy to mock--and the good intentions are rather undermined by the blatant product placement in naming every vehicle-- but it's a harmless enough strip that rather nicely creates the feeling of the PSA's that closed out the cartoon.

You do however have to wonder if the Department for Transport would rather have had Marvel throw some better liked characters in their direction. After all, the last time something like this was attempted it was Spider-Man warning us about child molesters. Flint and his advice on the Green Cross Code can't really compete.

Battle Island! from the same creative team (Kev Hopgood is on art) is a two page piece done for a W.H. Smith's competition where kids had to provide their own conclusion to how Flint would save the rest of Action Force from a Cobra attack. Wayne Clarke of Gosport is certainly a better writer and artist than I would have been as a child, but as his solution is as simple as having Flint fly in and blow shit up it makes you wonder how many entries they had.

Combat Colin gets his first story to have its own title as he's Verses the Gwanzullums. These shapeshifting aliens are more than just a gag for this strip though. They're the idea of Richard Starkings' as a means of creating a shared Marvel UK Universe. They'll be snuck into various licensed titles during 1988, including Thundercats and the 25th anniversary Doctor Who Magazine story that will be Lee Sullivan's first work on the book. Transformers will get off lightly and not be required to include them outside of Combat Colin, which is lucky as we already have one story coming this year that has a lot of hoops to jump through.

As I write this, I'm saddened to hear of the death of Sir Christopher Lee, my video thoughts on this can be watched HERE. In tribute I'm going to find a pretty young Swedish blonde to dance naked for me. 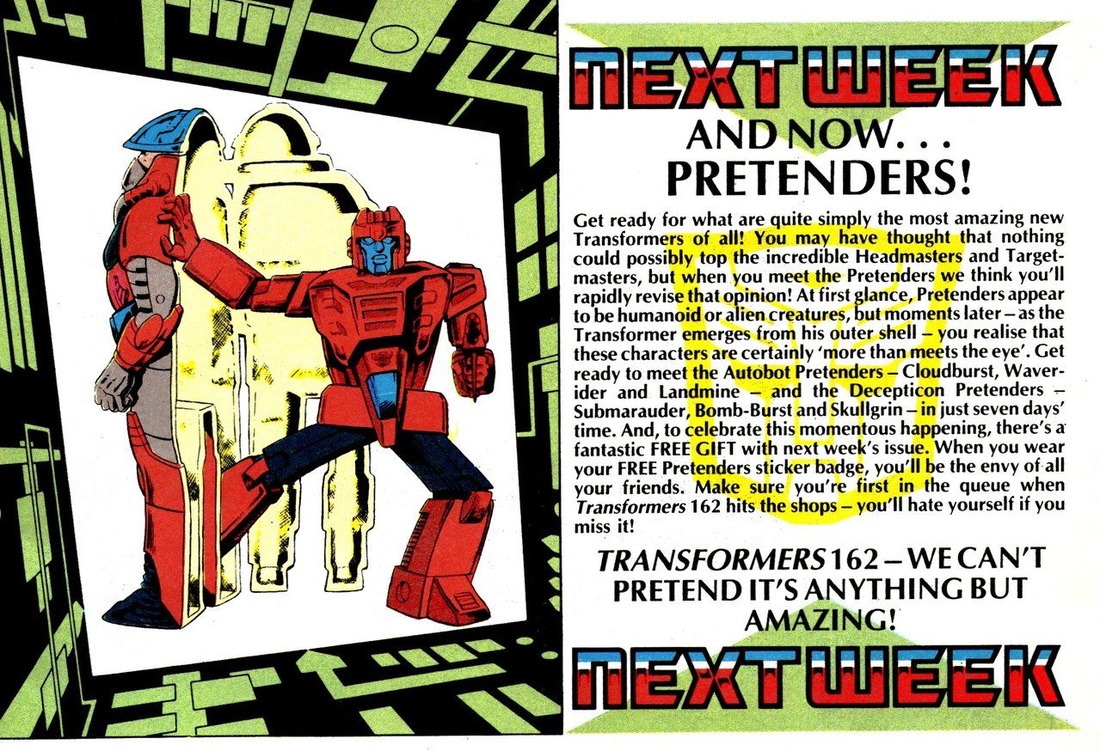