Panic on the Streets of London. 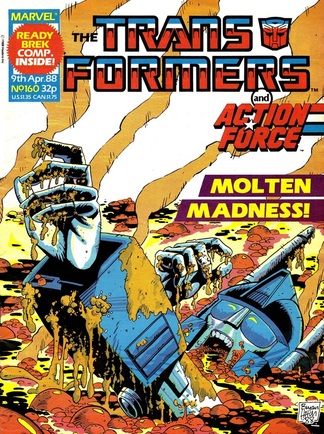 
Ultra Magnus- how nice to see you again.


In a story that has an awful lot packed into it (including some unnecessary celebrity hijinks), it's impressive that the most important lasting consequence of this issue is one from behind the scenes as we finally get the début of Lee Sullivan on interior art after a very long apprenticeship.

It's a bit of a puzzle as to why it's taken 16 months for him to move from covers to interiors, Dan Reed and Bryan Hitch made the transition much quicker and Sullivan has the advantage of that Senior style square jawed art that Furman obviously favours. It's possible it took him a while to get the hang of sequential art; certainly he's admitted in interviews that he was one of the several artists who initially struggled with getting the scale of Transformers right.

Whatever the reason, the year spent building up to this (plus the fact that he actually drew Altered Image! for the 1988 Annual first) is more than paid off with the best first art on an issue since... Well it's a shame Bryan Hitch was so recent as that rather takes the shine off the compliment, but it certainly beats the socks off any of the American art we've had so far in 1988. It's not quite as strong as the Annual work (less pages and a longer deadline may have helped there), with some of the proportions not quite feeling right, but it's still great, striking stuff and is only going to get better. It's no surprise he will go on to not only be the backbone of the comic during this period, but a key figure of the entire British comic scene. A place he still holds today after so many of his contemporaries either moved to American comics or changed career.

The key to his success is that he's a fanboy. He may not have had much time for or understanding of Transformers, but he grew up on and loved its 1960's predecessors devoted to the likes of the work of Gerry Anderson or the Daleks. He knows how important books like this can be to young children and never looked down on it or gave less than his all. Which is of course the approach to take. 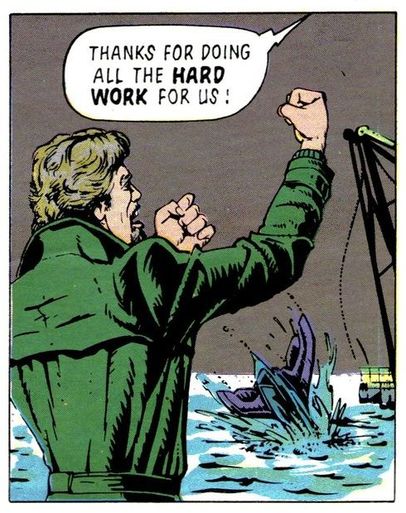 Super Dick defeated.
The story itself is a strange one. In theory it's the next step in the chain of British two parters moving things towards issue 200. In practice things kick off with a shameless bit of publicity seeking as we get a cameo from that real life G.B Blackrock: Richard Branson. This is the first of a long line of cameos from Branson- blink and miss him in Casino Royale- though thankfully it's the sort of thing Transformers will mostly avoid. Even if the appearance of Buzz Aldrin (who once punched a man for suggesting the moon landing was a conspiracy) in Dark of the Moon (a film that reveals the moon landing was a conspiracy) is the insane celebrity cameo to top all insane celebrity cameos.

Branson's presence is officially a tie in with his contemporary Keep Britain Clean campaign, but Furman rather nicely (and cynically) has him think about how it's really all about the publicity. The attempt to generate PR was a failure as the only notices it got were negative (one declaring Branson was a comic hero called "Super Dick"), but at least by showing he could capture a likeness this got Sullivan a gig on Doctor Who Magazine. Where he became the definitive Dalek artist and eventually got his work into a TV episode in 2014, even if he didn’t know his art of Abslom Daak Dalek Killer was being used in Time Heist until he saw it.

The real problem is that the sequence, though amusing, is drawn out to four pages to accommodate the guest star. A group of Decepticons coming to London and grabbing the bodies of Megatron and Centurion could have just as easily been done in one page, or even skipped entirely. Instead it fills a third of the comic and that badly throws off the pacing. Even if the panel of Branson looking incredibly pissed off at the giant robots ruining his clean up the Thames gimmick is hilarious. 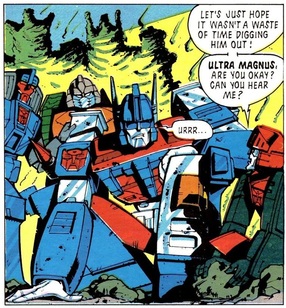 Look at Guzzle's chin envy.
This leaves the remaining seven pages having to rush to provide set up for the two parallel plots we'll be following next week, with the result being rather perfunctory. In the first the Sparkler Mini-Bots (not shown in their famous vehicular modes sadly) finally free Ultra Magnus from the plot dead end he's been trapped in for nine months. There's some fantastic nightmare imagery here of Magnus haunted by a laughing Galvatron and the gag where he thinks he may be mad when he sees the Decepticon jets flying two robot bodies across the sky is very well done. Other than that though, it's about moving pieces into place.

The more interesting side of the plot is over with Shockwave, mainly because the set up here will have more long lasting consequences. Shockers has moved back into the original Decepticon Earth base (it's odd that humans and Autobots have left it alone for three years, some very nasty defences must have been left on) and is carrying on with his plot to turn Megatron against Galvatron whilst a mysterious SOMEONE stalks about outside.

Oh OK, it's Galvatron, but Sullivan manages to hide a character with a distinctive silhouette better than some subsequent artists will even if it can only be one Transformer. Galvatron's focus on Shockwave shows up the full extent of the disconnect between the British and American material by this point; Ratbat now has virtually all the Terran Decepticons under his command and so surely he should be the one to overthrow. Instead, as far as the UK will be concerned, those characters involved in Uncle Bob's stories might as well not exist. 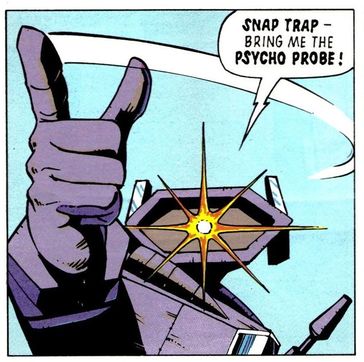 No, not the psycho probe!
Shockwave having troops under him at all (the Coneheads, Seacons and Blitzwing) feels something of a misstep in terms of fitting in with the US series where any of these characters can- and will- show up under Ratbat. Future stories will, sensibly, treat Shockwave as a loner roaming about his abandoned base in a way that will have a nice melancholy feel to it. Indeed, the return of Fortress Sinister after such a long absence has a bittersweet tone to it as well, the first really overt attempt at nostalgia in the book and a stark reminder of how much things have changed.

Beyond establishing these things though, the only bit of plot is the revelation that Megatron is physically fine but mentally blank, requiring Shockwave to order the fetching of the PSYCHO PROBE. Well, Megatron is a psycho, so that's definitely the probe you'd need.

On look, there's Centurion on the floor! After last issue's Next Week box and this one's Transformation made such a fuss of his presence this is no doubt going to be the start of an important adventure for him that will finally wrap up his vendetta against Triple I (the perfect time to do it after their departure from the American stories) in an exciting way that will....

Oh no, that's the last we will ever see of the character, lying dead on the floor. The cleaner (probably Tentakill) will be in with a broom between issues meaning he doesn't even get to lie there next week. An inglorious end for a former major character, I've spoken at length before about the dropped ball here, so I'll just say there's something ironic about this happening in the story that will conclude with the set up for the other great failure to follow through in the comic.

Despite not firing on all cylinders, the issue ends with a glorious two pages where the Autobots- having followed the Decepticons to Fortress Sinister- are confronted by the Mysterious Stranger. Magnus gets another great mental breakdown (these images are actually more Dan Reed than the sort of thing we'll come to expect from Sullivan) before a lovely full page spread of Galvatron lording it up over him. It's impressive enough in and of itself to suggest the quality upswing we'll be in for next week.

Though the fact the comic has not one but two splash pages, despite the London diversion taking up space, perhaps shows better than anything how little momentum there actually is here. 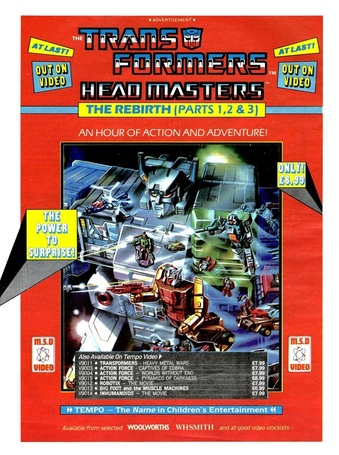 At last!
The only thing Transformation is more excited about than Centurion is a Ready Brek spot the difference competition with a camera as a prize. In third place on the anticipation scale being taken by promotion for the Spring Collected Comics reprint of Crisis of Command.

Grimlock (I'd like to assure reader Ralph Burns that it really is Grimlock rather than Furman, he was upset at my insinuation otherwise last week) gets a letter from John Gatehouse of Halifax asking the obvious question of why Rodimus Prime looks like Primus. The explanation that the Matrix changed him to resemble the Transformer God would work better if Hot Rod didn't look exactly the same. Plus, why didn't it do that to Optimus?

Early fan fic writer David Shaw of Manchester is worried that the Seacons resemble his own idea of Waterbots. Not because he thinks Hasbro have stolen his idea (something I've seen more than one supposedly adult fan claim over the years), but because it means the Decepticons might be spying on him. A nightmare fuel Grimlock adds to by suggesting all of David's electrical appliances might really be sneaky 'Cons.

Action Force sees the conclusion of Serpentor, though as it leads right into the next story with said Serpentor about to lead the defence against the invasion of Springfield this isn't immediately apparent. They'll actually be a two week gap before we see the continuation as the next issue's backup will mostly be concerned with housekeeping.

Combat Colin is still in his Combat Tank, luckily as a UFO lands in front of him. Colin's girly shriek of fear at whatever comes out of the craft is funny, but the real highlight is the jobsworth reaction of Albert Morden, traffic warden.

Hey, maybe Centurion will be in the UFO?

Next week: The unexpected return of two dead characters. 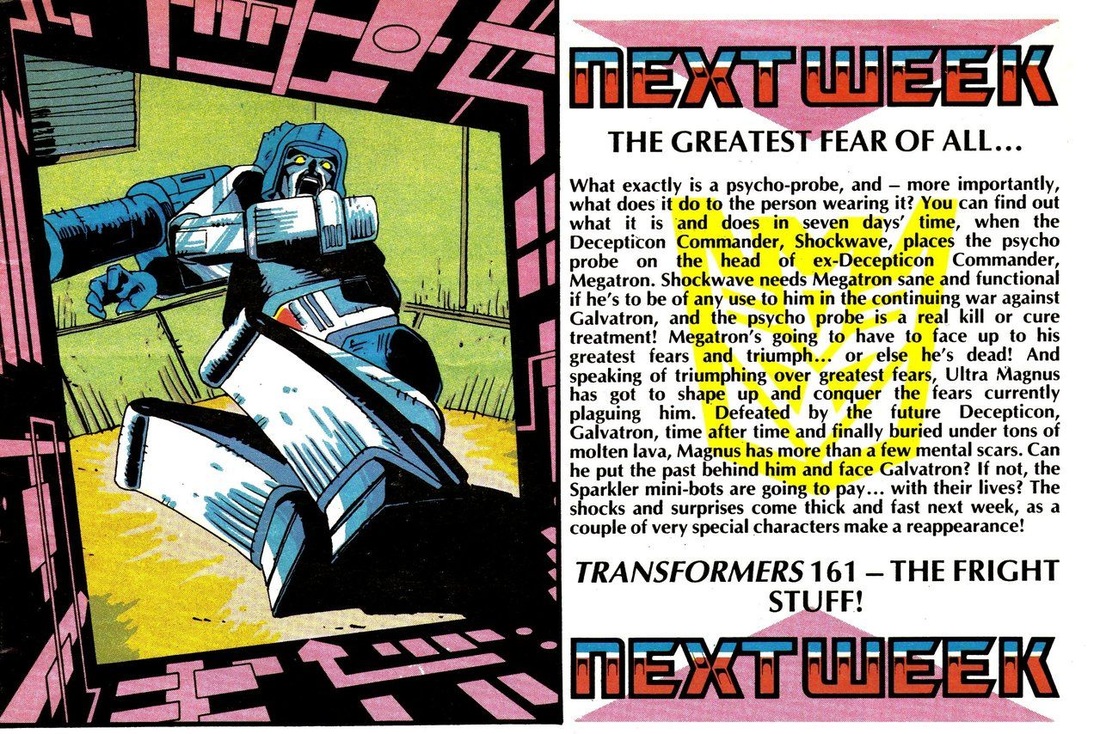