It Always Looks so Cool When Spaceships Come Out of the Pool. 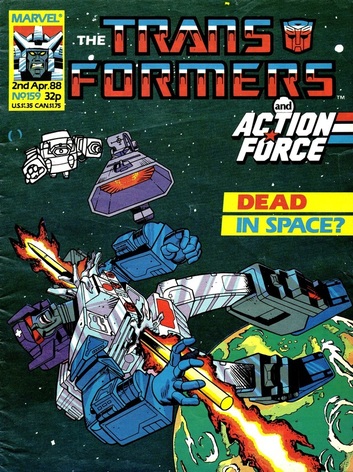 Look at the viewscreen, you monocular moron.

Ouch, that's a horrible cover this week. Will Simpson gives us a riff on the American cover, but with some very poor colouring and a botched attempt to draw Shockwave as transforming resulting in two Shockwave's (one uncoloured); it's that rare example of the UK effort being much worse. It's fair to say this doesn't inspire much confidence about the contents.

Luckily, whilst not top draw Budiansky, the straightforward action story that follows is better than you might expect. The Autobot side of the plot sees them try and attack the Decepticon island and (after a nice bit of "Oh shit" foreshadowing where Buster realises the vegetation is fake) the heavy armaments turned against them. It's here you get the real sense of how much Uncle Bob didn't like the Targetmasters, as they're easily ripped apart by lasers and tendrils.

During all this Maximus stays back at the shuttle in order to provide covering fire (in his one and only appearance in battle station mode) after Kup, as the only Targetmaster Bob has any time for, insists he's too personally involved to act clearly in the field. This is actually a nice touch and pretty much sets up Kup as someone who will play by the rules no matter what he really thinks and isn't afraid to speak plainly to his superiors. All of which will be key to later stories, and is a long way from his current IDW portrayal where he's a maverick who will bend and break the rules as he sees fit. Marvel Kup has more in common with Prowl than is often thought. 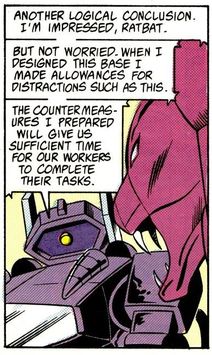 Eye hate you.
Beyond the action, the real highlight of the issue remains the interaction between Shockwave and Ratbat; with the later constantly mocking the former (including the glorious line quoted above) as Shockwave repeatedly tries to save face by unveiling new gadget after new gadget. This culminates in the insane revelation that the island is actually not just a fake covering for an underwater base, but a fake covering for a spaceship. It's mildly ludicrous (it's never clear if they rebuilt an actual island or if the entire thing is a fake. Certainly when they first moved to Florida it seemed to be a genuine island) but actually makes for a rather fun splash page as it takes off.

The shocked reactions of Barnett and Forsyth are the last we'll be seeing of either character. This means the various Throttlebot plots- not just their reduced status but the fact they're on the run from Grimlock- which have been going on for months will be resolved off-page. The next time we'll see them they'll have new bodies and be back in the Autobot fold, just in time to have their physical forms destroyed again. You just have to infer that the Autobots picked them up from III on the way home and imagine the awkward conversation that ensued.

Maximus has no time for wrapping up plots as he blasts-off after the island, sadly not in spaceship mode as we'll have to wait for it to double as Optimus Prime's yacht before we see that. The following scene of him being brutally skewered by a missile fired out of a palm tree is probably the most memorable image of the issue, and Spike having to shrink down to first Cerebros and then himself adds to the feeling of vulnerability. 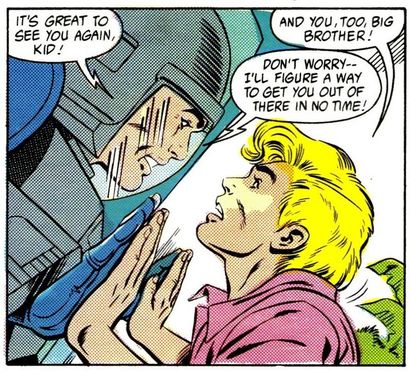 "I have been, and always shall be your brother"
Being in human form means he can have a proper reunion with Buster as well, separated by the glass of the dome covering the island in a visual reminiscent of the final scene of The Wrath of Khan. It's nice to get a moment of the two together for the first time, but all it does is reiterate Spike's commitment to brother.

It's the fate of Shockwave that stands out more than the brothers' Witwicky. Having finally had enough of Ratbat's snide after the missile fails to finish off Maximus, he heads out into space himself. This goes as well for him as the rest of his day, as he winds up being shot in the back and falling to Earth whilst Ratbat gleefully says it's too late to back for him. It's a fantastic sequence with some glorious black comedy in Shockwave's logical acceptance of his fate.

This has also been the result of more poorly done changes by the UK team. In the original American issues Shockwave is unambiguously dead; indeed it's the first death of a toy based character with no obvious get out clause Uncle Bob has produced, with Shockwave even flat out saying he's going to burn up. For Britain, Shockwave just falls to Earth and Ratbat simply refuses to go fetch him. The reason for this is obvious- it's only been two months since the British killed Shockwave in the future, there's little point in doing so again and he's too popular a character not to keep around. Plus of course, he's a space gun, if you're a writer who doesn't know how important getting exactly the right angle for re-entry is (or at least are willing to ignore it) you'd likely find Shockwave being killed in such a way more than a bit daft.

Ironically the original dialogue would have worked better with Shockwave's eventual American resurrection, as it's clear here that no one thought he was dead for even a second. That makes accepting him running about in the UK stories for the next two years without the bulk of the Decepticons noticing feel even more of an unlikely fudge.

The issue ends by slightly undoing the good character work on Kup by having him accept Spike as their new leader and acknowledge he should have let him come on the initial attack... Even though it's hard to see what difference it would have made as the island defences were still too much for Maximus. You just have to imagine Barnett being just out of sight waving the Throttlebots about.

Despite the plotting not being watertight this is still an enjoyable romp, even if Delbo again slightly struggles with the fight scenes and isn't helped by Nel Yomtov doing even more block colouring than usual. However, whilst it'll never top anyone's favourite story list, this is above average for Budiansky by this point.

Though considering the brutal damage he takes here, wouldn't it have made more sense for Maximus to be rebuilt into a new bigger form after this issue rather than before it? 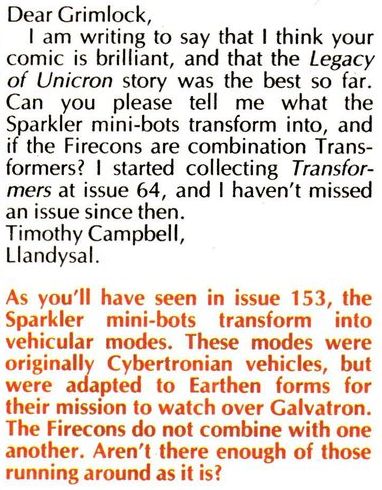 Ah, the famous vehicular modes.
Visionaries launches this week, so the sidebar on Transformation is given over to getting readers excited about the free hologram which comes with the first issue. Sadly, as I'm partial to the Knights of the Magical Light, this won't work.

Grimgrams sees Timothy Campbell of Llandysal ask what should be a fairly straightforward question about what the Sparkler Mini-Bots transform into. For some reason though Grimlock struggles, not even coming up with the basic "Two cars and a tank", instead giving some vague waffle about they change into "vehicular modes" that were once Cybertronian but are now Earthen vehicles. Had Furman written Enemy Action! without actually having seen the toys or is he on holiday and not Grimlock this week?

Serpentor Part 3 has a nice sense of energy building up to it as we cut between the various Action Force teams in their vehicles as they approach Springfield and prepare their attack plans. Pleasingly, after the slip up last week, every instance of "Joe's" is changed to "Action Force/A.F. Team". Or in one instance, "Yo Hawk!” The issue ends with the naked Serpentor awakening, though the blocking prevents us from seeing his snake.

Combat Colin is on patrol in the Combat Tank, taking out a town clock tower by accident resulting in some deliciously cheesy puns. "Thanks, but no tanks!”

Amusingly, amidst promoting the various returning characters and celebrity cameos, the Next Week box makes special mention of the return of Centurion (coyly called a "Humanoid robot of your previous acquaintance!"). Anyone buying especially for that is going to be disappointed.

For those waiting on baited breath, the first draft of The Book is complete and in the hands of a friend who is giving it the once over before I send it to Andrew Turnbull for formatting. This shit just got real.

Next week, both the long time coming début of Lee Sullivan on interiors and a cameo by the king of all pickles. 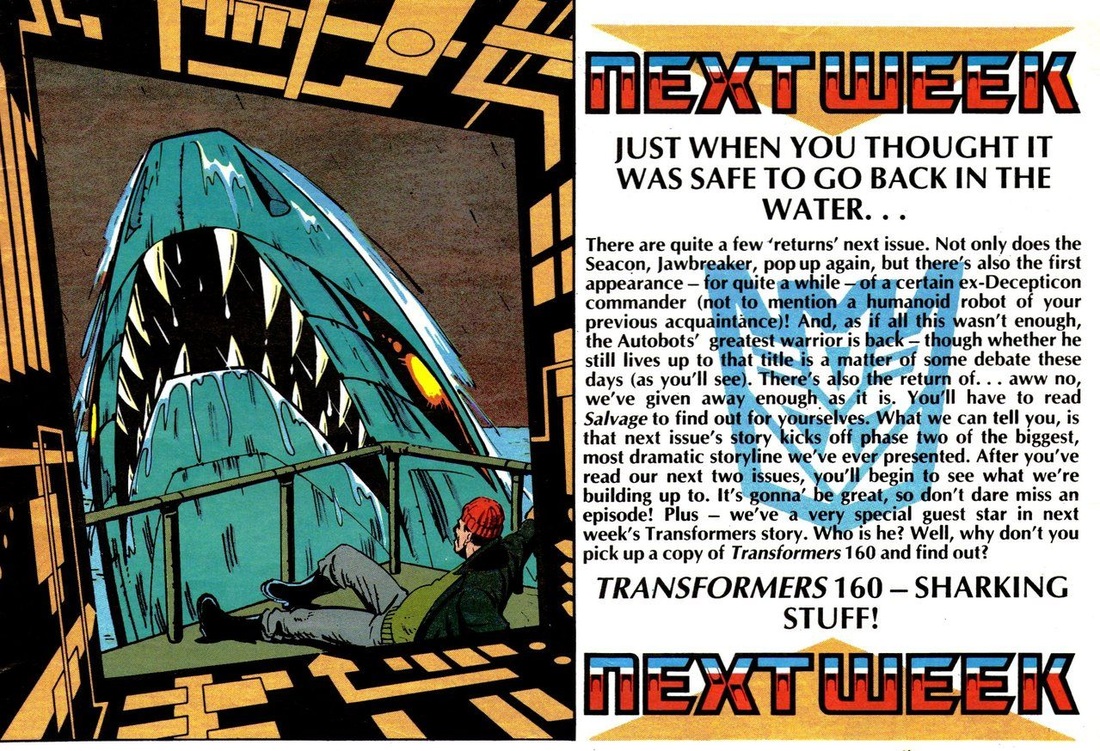 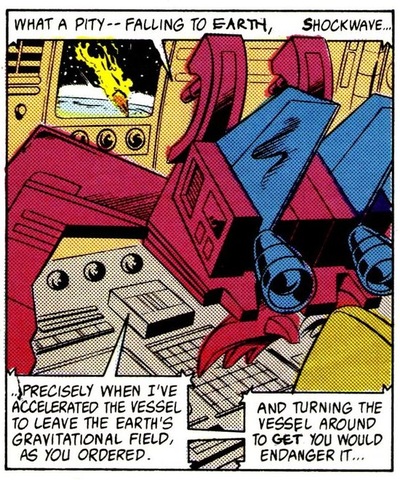