Islands in the Stream. 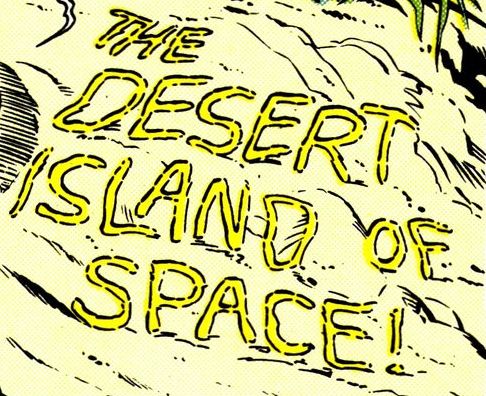 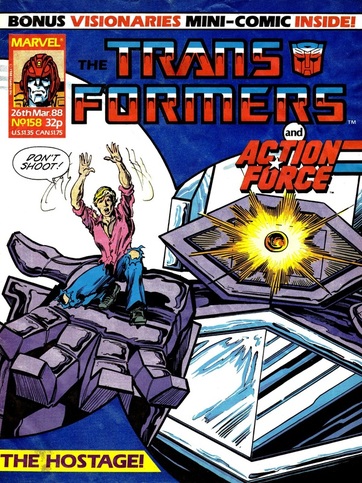 Issue 158: The Desert Island of Space!

This fleshling’s cost-benefit ratio is not to our advantage.

For those of you that missed it, HERE’S the special third birthday blog post giving you all a sneaky preview of The Book, including an amazing YouTube video. Of course, the best way for me to take a break from writing the book of the website is to write the website.Also hear me talk about the IDW collection of Transformers Universe HERE.

One thing I failed to note when mocking Spike’s love of pink two issues ago is that Buster was actually wearing exactly the same outfit when he was kidnapped. I don’t know if this was a deliberate attempt by Nel Yomtov to create a sense of unity between the brothers or if he’s just severely lacking in imagination... no, wait, he’s severely lacking in imagination. Regardless, this means the cover and opening splash page of the comic are actually a tad confusing as it winds up feeling as if Spike is the one in Decepticon hands rather than the now redundant Witwicky.

This is very much an issue of exposition, but the opening three pages show how to do it with style. Shockwave and Ratbat are on the beach of their island headquarters bitching at each other over the wisdom of keeping Buster alive. As well as recapping Buster’s plight, they also explain to each other that his presence is stopping the American navy (who have finally noticed a new island in the Keys).

It’s basic stuff and the idea the Americans would hold back because of just one boy is straining credibility. However, it’s enlivened by the rivalry between the two Decepticons and Ratbat’s sheer hatred of the fleshling who has caused him so much annoyance. There’s also a lovely sequence of Shockwave cooking Buster’s raw fish with a laser blast from his eye which is genuinely very funny (“I hope you like your fuel poached”). 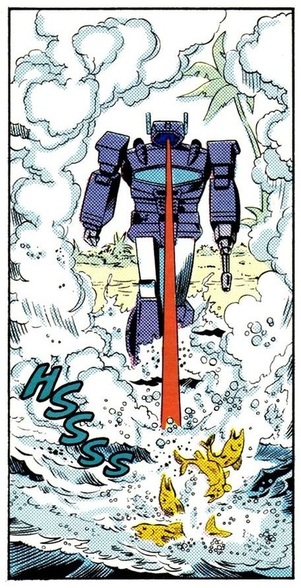 But how will he get the chips?
It’s also worth noting here that Ratbat basically has no need to hang around the Island base at this point, we’ve reached the end of a transitional period where he’s gone from being the Decepticon’s Cybertron based commander to co-leading the Earth forces. This seems something of a demotion, but is likely down to the auditor finding Shockwave an incredibly ineffectual leader, something that is clearly getting to old one eye and will affect his decisions in the next few weeks.

The joy of the way the exposition is handled in the opening is made even more impressive considering how unmemorable the rest of the issue is. There are two other “Story so far” threads, the second of which is the least essential. This involves Walter Barnett arriving on the USN boat occupied by Triple I and exchanging dialogue with Forsyth about things they already know. Even the stuff that seems to be moving the plot along is redundant as this is the last appearance of either character (bar a non-speaking one panel showing from each next week), so the team up with the toy Throttlebots and acknowledgement of two different sides aren’t going to go anywhere.

Though it is amusing that it’s only down to Barnett that the navy spot Buster at all, if not for him Shockwave’s plan would have been a total non-starter. This leads to his one contribution to the story (and final act of the series), phoning Sparkplug in order to let him know they’ve found the minor Witwicky.


This takes us into our third thread of exposition, as Spike arrives at Sparkplug’s hotel and- whilst bugging the phone-line so he can trace Walter’s call- explains to his father everything that happened to him in the last story. This works better than the III stuff as the scenes of Sparkplug feeling defeated and lost in a cheap motel with no business and no family are surprisingly effective and for once mean his changeable mood towards the Autobots (this week *Rolls Dice* anti) makes sense. In particular his cry of “What did you do to my son?” when he meets Fortress Maximus is very nicely down. 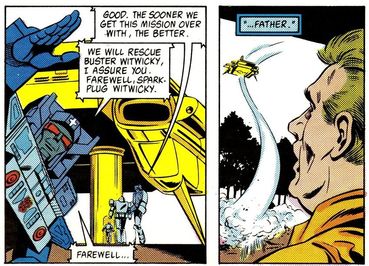 Maximus actually looks happy. It won't last.
However, as nice as the genuine emotion is (and Maximus calling Sparkplug “Father” as he leaves sells the binary bonding idea better than anything else so far), 98.98% of this sequence is just a straightforward recap. In particular, having ignored then in Trial by Fire!, Bob was obviously under pressure to make sure the Targetmasters got a moment but doesn’t like them enough to properly integrate it into the plot. So we get a scene of Maximus introducing Sparkplug to each one of them in turn that has nothing to do with anything else in the issue, the only one of them will do anything is Kup as he’s being used as the voice of dissent about having a human take charge.

Effectively the plot only really starts on the last page as the Headmaster shuttle arrives at the island and the toy Throttlebots stop III having it shot down. Apart from that, and the odd nice moment here and there, it’s the very definition of a filler issue.

Thankfully, Delbo feels more assured on art than he did last week, but it’s here his tendency to just draw character models with very little variation becomes especially notable, in particular with Kup on the penultimate page.

Far more interesting than the contents is how this issue has far more content changed by the UK editorial team than has been the case since Gone But Not Forgotten! This is mainly to cover an error in the original American printing that consistently got the number of Throttlebots wrong (seven instead of six), but a reference to Galen as a human and the name of Hot Rod’s Targetmaster as “Sparks” have also been altered. The later is actually the first time this has been done despite at least one previous name-check, I suspect this will prompt at least one letter asking why Firebolt goes by two names.See below for a gallery of every, unusually poorly done, change (one reference to the "Six" captured Throttlebots was missed). 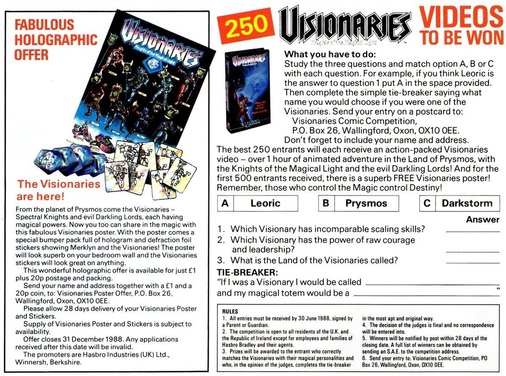 Knights of the magical video.
The big news this week is Visionaries, the new monthly comic book based on the soon to be cancelled toyline. Transformation, likely at Hasbro’s insistence, is given over entirely to pimping the new title and there’s a “Mini-Comic” that’s basically a selection of three pages from the first issue with a competition for stickers and a video. The comic won’t last long, but it is interesting that whilst The Real Ghostbusters is being launched in a way similar to Transformers (fortnightly to start with- and it will go weekly quickly- and a combination of strips) Visionaries is more along the lines of Action Force Monthly. We’re basically in a period of change for Marvel UK as they attempt to move into the US format monthly market. Ultimately with very little success, Transformers and The Real Ghostbusters will easily outlast any of the four weekly titles.

Speaking of failed Monthly titles, Action Force begins the second part of Serpentor, which is most notable for a sequence of Rip-Cord being captured by a gun toting small girl thanks to everyone in Springfield being a Cobra agent, no matter how innocent seeming.

Long term readers will remember that, back when Action Force first appeared as a back-up back in issue 99 I wondered what the Action Force equivalent of calling the troops “Joes” was, and how annoyed I got at that first story for working around every possible chance to reveal this. Usually by substituting “Them”. Here we finally get an answer as “Joe operative” is changed to “A.F. operative”. Which is less sexy, and amusingly the person responsible for changing things misses an entire page where Duke rallies the troops by repeatedly calling them “Joes”.

Speaking of people being called by the wrong name (ha, see how I’m creating a perfect segway here between every part of the issue?) Grimlock receives a letter from Jeffrey Ruddle of Bracknell asking about Galen being called Kord in the Annual. Unusually there’s no handwave here from Grimlock explaining it (along the lines of, for example, revealing his full name is Galen Kord); he flat out admits it’s the result of some initial confusion over the character’s name and that the Annual was wrong. That’s a first, and is probably as close as we’ll get to confirmation that Galen was called Kord is some early drafts of the Headmasters document.

Speaking of people who like wearing unusual clothes (OK, it’s a reach now), Combat Colin and Semi-Automatic Steve end their first story dressed as small girls’ in pink dresses as a result of a real one persuading the robot to go back to his own planet- I’ll be willing to bet King Nonose was behind this- after pointing out violence is unacceptable behaviour. Her suggestion that Colin and Steve learn how to deal with difficult situations in the same way she does results in them firmly grabbing the wrong end of the stick and their new eye-catching look. Steve is especially cute.

My segway ability falls down when it comes to pointing out that Hound and Huffer are covered by AtoZ and that the sidebar of Transformation is our first mention of the forthcoming Pretenders.

The Next Week box attempts to create a sense of mystery about the true secret of the island. You know, the one the title of the story claims is a desert island in space. I wonder what its secret will be? 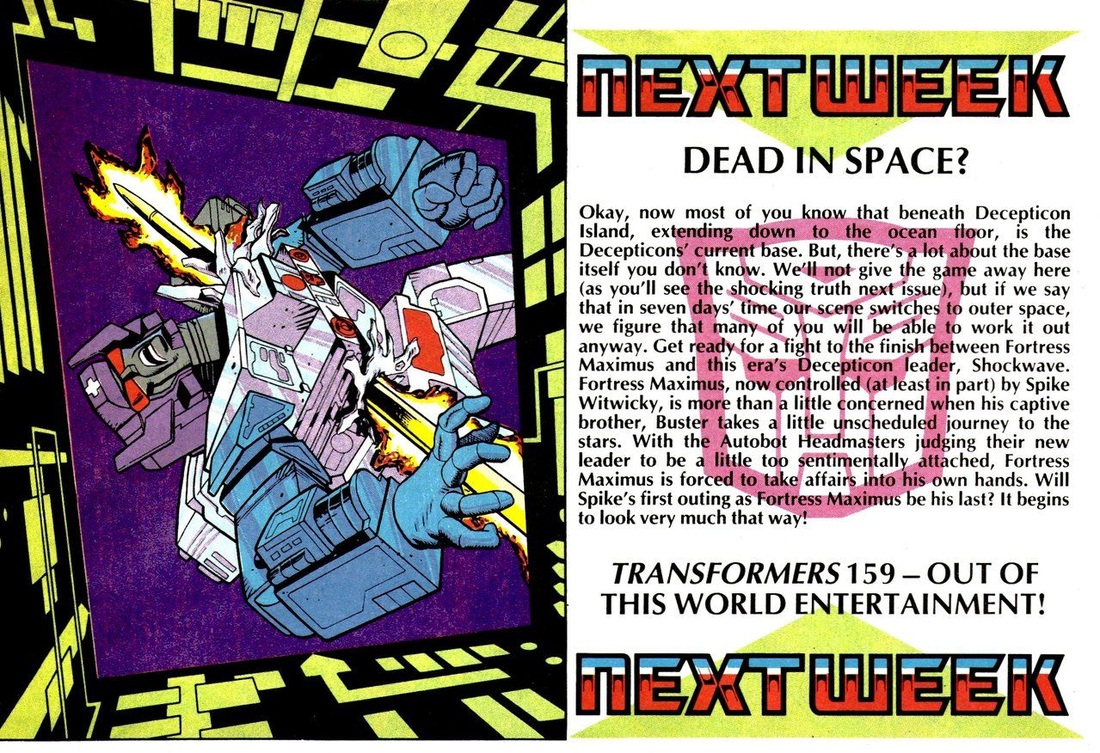 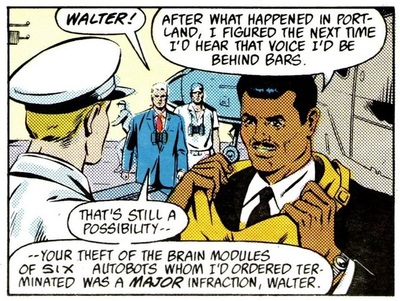 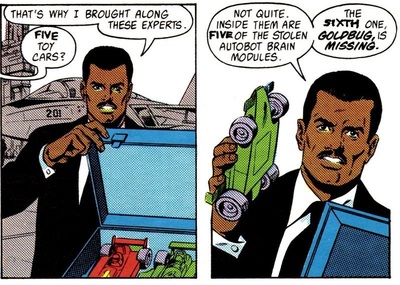 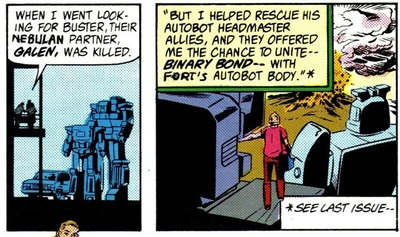