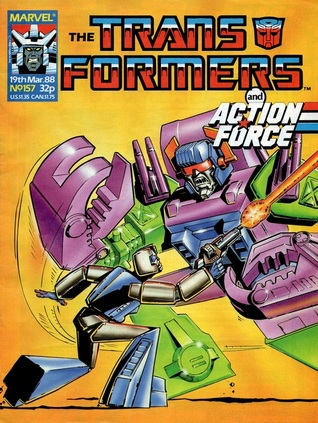 My first impression of you was right. You're just a bunch of cold, lifeless machines!

For the second week in a row we get a cover that really doesn't have anything to do with the contents of the issue and is focused on an Autobot who basically does nothing within the comic. Here at least there's an excuse, as Lee Sullivan originally drew this Scorponok Vs. Highbrow effort as a potential cover for the 1988 Annual where it would have had some relevance to the contents (ironically the final version would be more generic). Despite that, it's hard to escape the feeling the UK team is deeply uninterested in this story.

"Uninterested" also nicely sums up Galen's attitude as he doesn't remotely give a toss about Spike's desperate plea for help and instead leads his troops outside to follow the Ark's fuel trail. Though this makes his stance a little clearer (the problems the humans are having with the Earthbound Decepticons are not his fault and were in place before he arrived) it does wind up making him look a little silly.

Firstly, he's come all this way to answer the distress call and is now stubbornly refusing to actually do anything about it. Tellingly, Goldbug- the person who actually called him for help- is completely mute throughout this sequence as, of course, he'd be making the argument for rescuing Buster as well.

Secondly, the Headmasters have no other plan. The best they can come up with is to stumble about on foot looking for where a spaceship might have gone. At the very least following Ratbat will likely lead them to the local Autobots quicker as they're not going to be too far from the Decepticons for long.

Luckily for Spike (and we get an amusing sequence of him being forced to camp out in the volcano) things change when the Decepticon Headmasters show up. Their arrival in Earth orbit is a rather wonderful mirror to that of the Autobots last week, but here there's no attempt to suggest a mental link between Nebulons and Transformers as even when they're robots it's just the little men in big suits ("Call me by this body's name!).

Their arrival at the Ark does at least give Spike the chance to show how proactive a character he is, reactivating the distress signal so as to bring the Autobots back just before Scorponok can get really nasty with him. Showing he can pay attention and use his brains is the only real chance the story has to try and make the ending seem plausible. 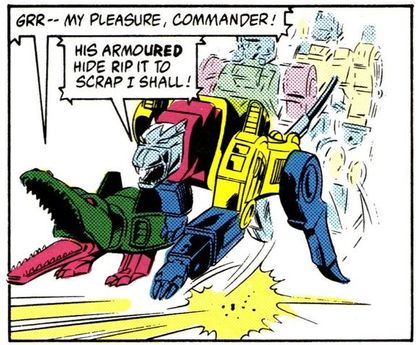 That's the way to do it! Note the poorly altered spelling as well.
This leads into the big fight between both sides, and unfortunately it's where Jose Delbo's art really falls down for the first time. Everything looks incredibly rushed, most notably in a panel where Skullcruncher looks more like the crocodile from Punch and Judy, with little sense of pace or scale.

The lack of scale is especially important as characters talk about Fortress Maximus being bigger and the fact he can't get down a tunnel Scorponok can is a major plot point, but there's no sense of this from the art. There's no panel showing the difference between him and his Decepticon counterpart, or indeed between him and the other Headmasters. Even on the double page spread Maximus is squatting so as to make absolutely sure we get no real idea of his size. The result is a visual mess that may well be the weakest fight in the series to date.

Spike, sensibly, flees from this badly drawn scuffle, going deeper into the volcano as Scorponok and Maximus follow him. The story contrives to separate Galen and Zarak from their robots for their final confrontation, which is a smart touch as, with Max and Scorpy not really being characters here, this is very much about their antagonism so it makes perfect sense for it to be face to face.

Delbo does better with the one on one fight between two humanoids over a lava flow, but the panels are still rather small and cramped, stopping it from hitting that Revenge of the Sith grandeur. This is presumably due to having to fit Galen's change of heart, self sacrifice for Spike and passing of the torch (or rather his magic hat) all into a page and one panel. It's a rushed departure for a character who was a lead in his own series, with his exposition about why he now realises saving all lives is important feeling completely irrelevant as it's character development for someone who dies right afterwards. 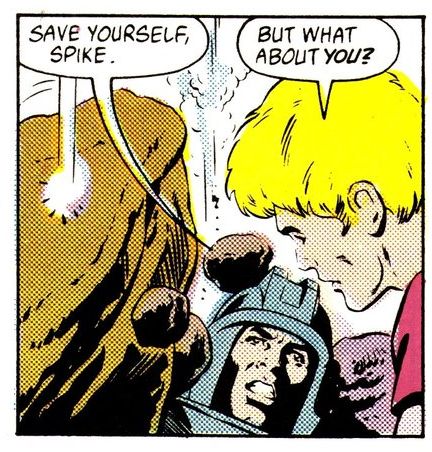 You think that hat would protect him from rocks.
This leads into a strange sequence of Spike being able to control Maximus' body with just the helmet of the costume on and standing on the big robot's shoulder (where, again, the scale looks wrong), in a way that looks oddly like a moment in Rebirth. Everyone then flees from the volcano before it erupts (as a result of...err... coincidence? The rock fall that kills Galen doesn't look like the sort of thing that would cause that) and the Autobots make the most token attempt at mourning Galen before going "Hey Spike, wanna take over?".

The daftness here is that it would actually make sense to have Spike on the team; he can clearly use the technology, has good motivation for helping and without someone to control Maximus he'll be stuck on the bench forever due to a serious flaw in the idea of merging an immortal robot and a humanoid of limited lifespan. But making this new guy they've only just met the leader? That's ridiculous. Spike's own incredulity at the idea feels like the author speaking, but this is something we'll get to explore more next week.

This is a story that has some nice moments and ideas, but poor art and the extent to which Bob is clearly unhappy at having to throw a character he's put a good deal of time into developing under a bus, means the whole thing just falls apart. The best thing here is Lee Sullivan's "Not good enough for the Annual" cover. 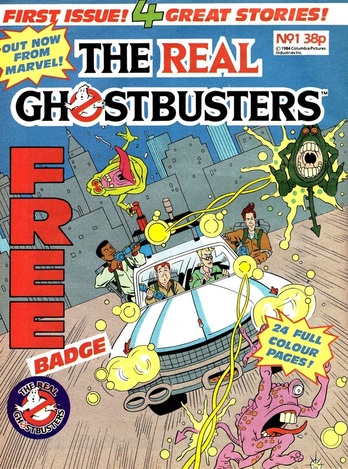 The advert for Real Ghostbusters.
Transformation is very excited by the launch of The Real Ghostbusters comic, not only does the text feel more genuinely enthusiastic than most of the similar launches we've seen in the past, but this will go on to be the first licensed property Marvel UK have put out since Thundercats which will have some legs. We also get some hints this will be just the beginning of the big push for '88, and we'll be hearing a lot more about the other comics Marvel will be doing as we go along.

Speaking of which, Grimlock responds to a letter, from Nicky Cutts from Barnsley, asking about the final fate of Death's Head by suggesting he keep an eye on the rest of the Marvel range, as "You never know what you might find! Or Who you might find!”

Combat Colin sees Semi-Automatic Steve try and distract the robot with his best joke, but it takes Colin blowing himself up with a grenade to get an actual laugh from the machine.

Action Force starts a new adventure with a reprint of issue 49 of G.I. Joe, Serpentor. The idea of Dr. Mindbender cloning a super-soldier from the remains of history's greatest warriors (plus Storm Shadow) is utterly ludicrous, and apparently something Hama wasn't too keen on this being forced on him by Hasbro. However, the scenes of the brilliantly camp Mindbender and Destro running about with dead bodies are huge fun, as are the Doctor's patronising instructions to Cobra removal men on what to do with the corpses. Anyone who complains about this ruining the "Realism" of the series really hasn't been paying attention to how silly this comic is.

Next week, is Spike a good enough leader for Dr. Mindbender to be interested in him? Tuesday is also the third anniversary of Transformation, I've no idea what I'll be doing yet (getting the book into shape before the end of March is consuming all my free time), but there will be something up on the 19th to celebrate. Possibly a book preview if you're lucky. 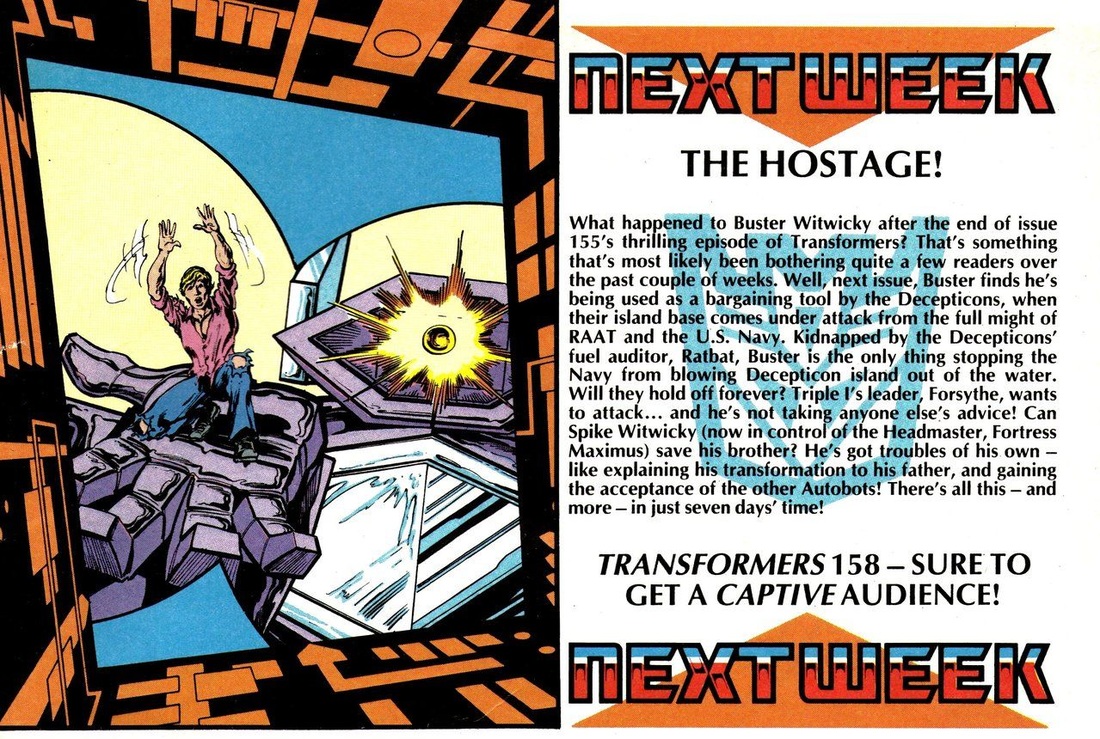