He's Not Heavy, He's My Brother. 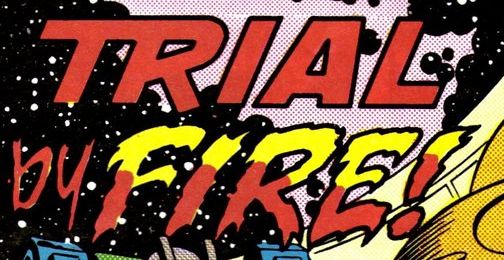 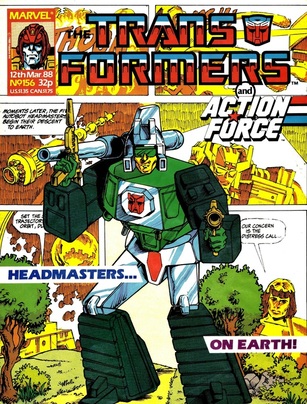 
Sometimes I'm ashamed to admit that you, the son of a mechanic, are related to me.


And the award for the worst cover to the comic since Second Generation! goes to the poorly realised attempt to make this issue's effort seem more exciting. Someone (presumably Furman) clearly thought Dougie Braithwaite's drawing of Hardhead on a road was a bit dull and tried to sex it up by putting art from the main comic on the background.

The comic itself opens in a mildly uninteresting way as well, but understandably so as it has the task of bringing the Headmasters into the main book and explaining their back-story to readers who missed their own series, whilst at the same time dealing with some toy related issues that Budiansky is clearly less than enthused by.

Recapping the events of Headmasters is a sensible move, especially considering the fact that in the UK it's been three months since that backup finished. So we open on the Steelhaven on the way to Earth with all the Headmasters (though amusingly the Targetmasters are reduced to non-speaking extras. Uncle Bob was clearly not a fan) having a conversation covering their names, their Nebulon names, basic personalities and the story so far. Meanwhile Fortress Maximus is being rebuilt into a new bigger form that better resembles his toy (or rather it’s features) and includes Cerebros for the first time. 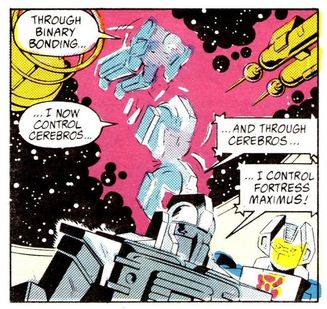 "And you didn't see my in Headmasters, right?"
Whilst necessary, it's not the most engaging reintroduction to the characters and the recap includes things like Llyra that are redundant and will never be mentioned again. The potential impact of the new bigger Maximus is also undone by the fact Delbo doesn't draw him looking very much larger than he was before, plus of course Cerebros was everywhere in Headmasters thanks to Frank Springer's eccentric use of character models, meaning it's not especially clear he's supposed to be new.

On the plus side, when Galen merges with Cerebros we get the first hint that the Headmasters are mentally linked to their Nebulons rather than simply communicating by radio. This will quickly become standard, and effectively retcon how the relationship previously worked, presumably to remove the question of what happened to the Autobots’ original heads and personalities. Not that this stopped ReGeneration One pointlessly treating their old heads as a thing worth revisiting.

Down on Earth, we get the other side of the comic having to more accurately portray the Maximus toy, as Spike Witwicky comes home from college. Bob is clearly annoyed at having to introduce this long lost brother to Buster and uses the story to vent his frustration. Most notably in having Sparkplug joke how he's sometimes ashamed to admit he has a son who's not a mechanic.

Yes, Sparkplug is OK; even if he did spend a day buried under his garage (I was also wrong last week about RAAT only having one more appearance as they're the ones who dug him out and now on guard outside). It's a relief after the tension created by Ratbat's attack, but it does raise a question about the time-scalee as it means Brothers in Armour! and the journey to Earth both had to happen in less than 24 hours. Which, if nothing else, makes fitting Worlds Apart in there even trickier. 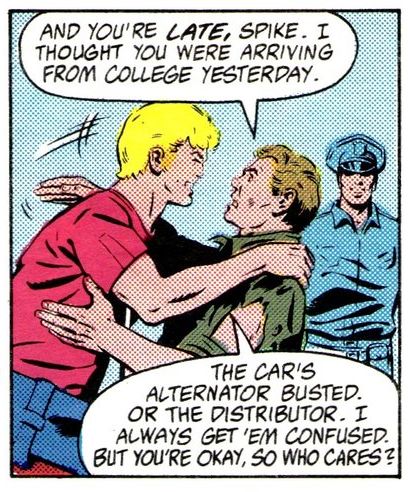 "About three years late".
Spike himself looks exactly like Buster. He also has the same personality as Buster, a sensitive smart kid who is useless with machines much to his dad’s chagrin (something played up here on the assumption it’ll be funny in terms of what happens to him). He’ll slowly but surely replace Buster as well, with the younger Witwicky reduced to hostage status before being faded out of the book entirely.

You get the feeling that, as a compromise, if he wasn’t allowed to keep Galen, Bob would have settled for making Buster Maximus’ new partner and when this was vetoed as well, he rather grumpily just made the unwanted new brother exactly the same.

The fact Spike’s a retcon is also lampshaded by the fact he doesn’t know anything about what his family have been up to for the last three and a half years, needing the entire concept of Transformers explained to him. Did his dad or brother never once get in touch? If only to explain how Sparkplug managed to have a heart attack? Plus, whilst the recap of Headmasters was understandable, covering the basic format of the book seems a bit redundant at this stage.

Things perk up once Spike (in a fetching pink t-shirt) hikes up to Mount St. Hilary and we get a surprisingly evocative sequence of him exploring the empty caves, with some black comedy to be had from the way he finds Goldbug in small toy form and casually tosses him aside.

The two sides of the plot meet as the Headmasters arrive at the volcano, and we get a nice panel from Delbo of them towering over the tiny Spike as he cowers hiding in a corner that rally sells the sense of scale.

It’s here that we have to deal with something that’s often held up as a glitch in relation to Galen’s personality. Throughout this issue he has no regard for the people and is only interested in answering the Autobot distress call, often coming across as callous in his attitude to the locals. This seems at odds with his previous Nobel Man of Peace status.

However, I think it actually just about works. Galan is first and foremost a patriot, someone deeply concerned with his own people and someone who had never met an alien (or possibly even been aware of them) before the Autobots came to his world. As much as he is a good man he’s having to work mentally on a different scale now and isn’t quite adjusted to his new situation yet. Having to learn to change his ways and accept all aliens are equal is an obvious character arc for him rather than another retcon.

The problem is, it feels odd to try and introduce character development for Galen when he’s only got one issue left to go before being killed off to be replaced by the new kid.

That’s a spoiler by the way. Sorry if you haven’t read this before.

The cliff-hanger comes as the Autobots find Goldbug and are able to communicate with him despite his weakened state thanks to Chromedome using his fingers to read the toy Autobots mind (now there’s a gimmick with potential, I suspect James Roberts was reading this one very keenly) and project a hologram of Buster being kidnapped by Ratbat. Maximus not caring is what causes Spike to come out of hiding, creating a slightly odd ending of “Is the boy in danger from the Autobots?” 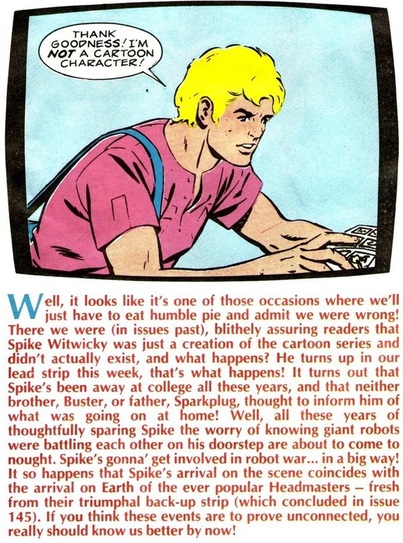 As we all suspected.
This isn’t the most exciting of issues, being mainly set up and not hugely exciting set up at that. There are a couple of nice moments, and amazingly Sparkplug gets to be a sympathetic character for a third week in a row, but whilst awful it’s never going to go down as one of the greats.

If Budiansky is mildly sarcastic about having to introduce Spike, he’s got nothing on the UK team. Transformation has a doctored picture of him from the main strip declaring “Thank goodness! I’m not a cartoon character!”, before the main text admits they were wrong about him being an invention of the TV series, it’s just Sparkplug never bothered to involve him in the family’s problems. ZING.

Grimlock is all about teasing future issues this week, revealing Megatron will be getting out of the Thames in issue 160 and he and Blaster will be having a massive fight, albeit acknowledging it’s going to be a long time before that plot gets picked up on. Trent McCurdy from Melbourne Australia gets to be the first person to ask the really obvious question of why the opening of the film claims it’s set in 2005. Grimlock’s reply that the narrator just got it wrong is a brave one in an issue that has to eat humble pie over previous claims about the cartoon’s accuracy.

Slaughter concludes the comic’s first regular Action Force adventure by having Sgt. Slaughter simply punch out Zartan thanks to the rule of new toy cool (oh, and that Duke/Zartan image from last issue is indeed art from this story despite what I thought). The story ends on a sinister note as the Jugglers- the secret government body that runs Things- order Hawk to leave Cobra Island alone. The colouring going a bit wrong here and making everything a light shade of purple just adding to the dark feeling. Overall, this wasn’t a bad opening, even if it doesn’t show Hama at his best.

Combat Colin and Semi-Automatic Steve attempt to destroy the robot (who is gloriously juggling cars) with a pair of magnets, but his deft footwork means they wind up being drawn together with a clang. The cheeky grin on the robot’s face is just brilliant.

You might be surprised at me not including a single bit of satire at the expense of the British general election that finished in the early hours of the morning as I’m writing this. Sadly though my attempt at topical humour has been undone by the fact it’s next week’s issue that has a now redundant leader gotten rid of with indecent haste. But who will it be, Spike or Galen?

Oh wait, I already spoilt that one... 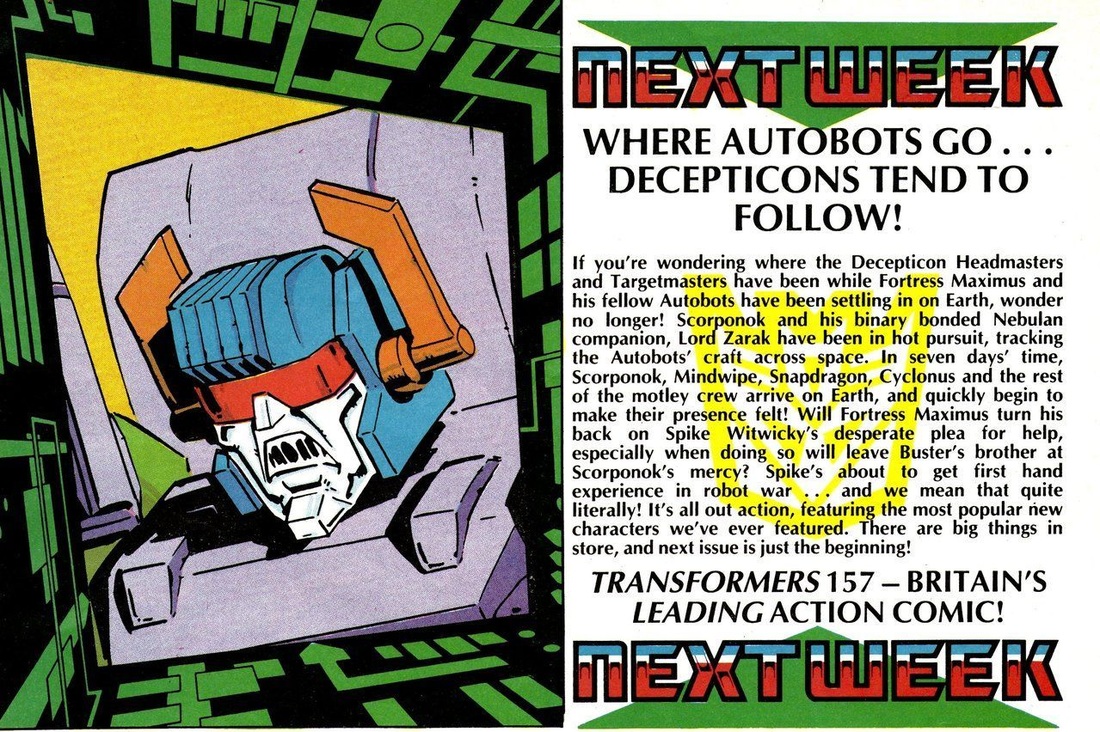