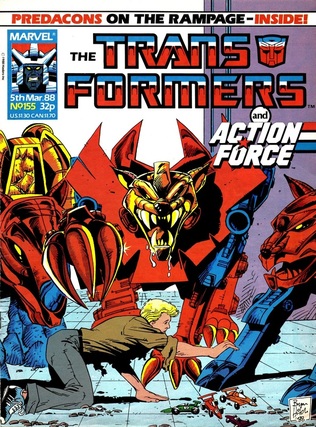 
“How dare they take us so lightly!”
“In case you haven’t noticed Wideload, we’re not exactly ten-ton tanks!”


After a surprisingly serious first half, my main worry going into this was that Budiansky would, as he so often did, lose his nerve and quickly descend into every possible gag about the Autobots being small toys in a way that wouldn’t really work with the darker tone of the opening.

Initially at least, this is not the case. Instead we open with an impressive battle sequence of the Preadacons raiding III headquarters that’s surprisingly brutal. Often human deaths are more implied that shown, but here as well as some obviously lethal RAAT vehicle crashes we have Razorclaw shooting a human in the back on-panel. Despite only being two pages it’s probably the most visceral bit of combat Uncle Bob ever wrote, with the only concession to the usual Comics Code style morality being a caption reading “Defeat and destruction” that looks suspiciously as if it was supposed to say “Death and destruction”.

Once they get inside Forsythe, previously a dislikeable comedy character, actually gets a moment of dignity as he tries to go down fighting despite clearly being useless in the field. This is however where the (toy) wheels start to come off the story a bit as Ratbat (being carried in Divebomb’s mouth) Transforms and declares it’d be a waste of fuel for Forsythe to sacrifice himself when all they want to do is examine the Autobots corpses.

The Predacons quickly find the brain modules are missing (I’m not sure how they notice the absence of something so small in a crushed lump of metal, is it made of special material?) and depart following the fuel scent left by the brains. But not before effectively revealing to Forsythe that there really are two groups of warring Transformers on Earth. 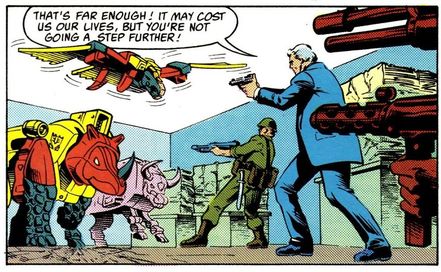 This shit just got real.
On the surface this seems a bit sloppy, but it’s worth remembering the campaign of misinformation to keep humans thinking Autobots and Decepticons were the same was carried out by previous Decepticon leaders, it seems Ratbat (at this stage, later in the year he’ll put some effort into good human/Con relations) just doesn’t care. It does however mean Forsythe finally sees the light in a nice panel of him looking completely destitute.

Of course, with III/RAAT now knowing the truth and having the potential to become Autobot allies this story will be their penultimate appearance in the book.

Over at the Witwicky residence the arrival of Barnett means we get a very long delayed reunion between Buster and “Bumblebee”. Though as Goldbug is in the form of a toy car this is more surrealistic than sentimental. Rather nicely we get some of the best writing the ever changeable Sparkplug has had, first he’s concerned at his son’s depression over the TV execution and then simply gives him they keys to his pickup when Spike needs to get to the Ark quickly.

This means the next scene has even more of an impact as the Decepticons arrive and demand to know where the Throttlebots are. Sparkplug’s refusal and the subsequent attack upon him make for a nice tense mid-issue cliff-hanger.

After such a bleak first three-quarters, it’s here that Budiansky can’t help but sneak in the comedy as Buster and Barnett stop off at a mall to get some new batteries for the Throttlebots. No, don’t think about the logic there, you’ll go cross-eyed. It’s here that the Predacons attack and characters the story has previously portrayed as serious and lethal killers (who can apparently sneak up on people despite being giant day-glow monsters), become masters of slapstick as they run around the shopping centre whilst the Throttlebots make gags about being quiet as they run into a bookshop. 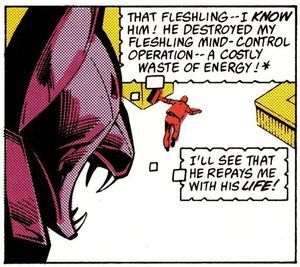 Unexpected continuity!
It’s not a bad sequence as such, but it is at odds with the rest of the story as it feels more like padding than anything else. There is a nice moment of Ratbat recognising Buster from Buster Witwicky and the Carwash of Doom!, but overall it feels like a longwinded way of separating Buster (and Goldbug) from Barnett (and the rest of the Throttlebots) for the sake of the cliff-hanger.

The irrelevant feeling to the shoppers having their day ruined is reinforced both by the solution to the battery problem being for Buster to use the ones from his boombox on Goldbug and the fact the mood suddenly switches back to being serious the moment it’s over. The entire four page sequence is therefore left feeling like a strange diversion.

The final page however, is not just serious, but melancholy as well. Buster and Goldbug find Mount St. Hilary to be nothing more than an empty cave with some abandoned equipment in it, their shock and surprise almost feeling like a commentary on the changes the book has undergone since that day Bumblebee crashed into the back of a teenage boy’s car. Changes that are about to get more severe as Buster sets up the SPACE radio to send out a distress call to the Autobots on Cybertron. This brings us full circle back to how 1987 ended, and the Headmasters are coming to Earth.

But before that we get a great cliff-hanger as it turns out Ratbat had snuck into Buster’s boombox. He emerges and in a great panel casually crushes toy Goldbug with one claw whilst looming over the young human. With Spike about to arrive, is this the end for the now redundant Witwicky?

I wound up enjoying this story much more than I have on previous readings, it doesn’t quite have enough plot to fill its length and the mall sequence is poor, but compared to what Uncle Bob was giving us at the end of 1987, it’s a distinct step upwards and is probably the most serious treatment Ratbat would ever get in the series. Jose Delbo also gets to play to his strengths in a story that is mostly based around humans rather than robots, making for his most assured art yet. 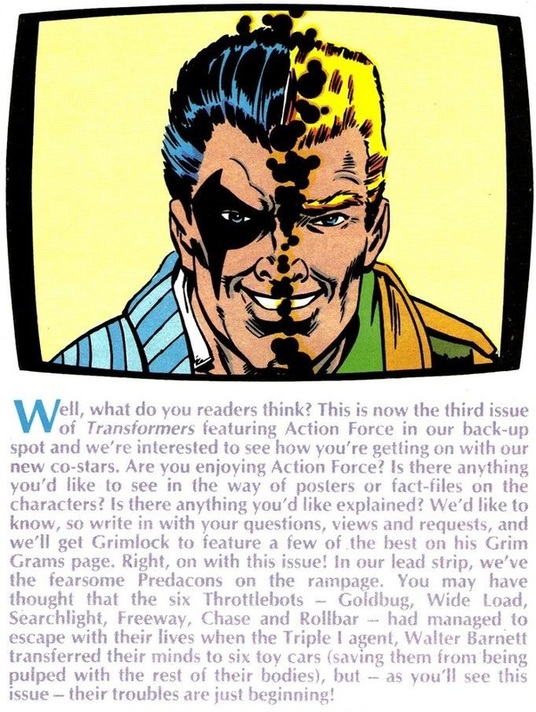 "What we'd like is for Action Force to go away".
The rest of the comic has a very uncertain tone this week. Starting with Transformation asking readers what they think about the Action Force merger and whether they’d like to see posters and fact-files. I’m guessing the answer is no. The page is accompanied by an image of Zartan merging into Duke that looks more like it comes from one of the home-grown Action Force issues rather than next week’s conclusion to the first backup issue.

The sidebar has another Captain Rik/Ricicles promotion. That’s what, the third now? Did Furman have shares in Kellogg’s?

The uncertainty continues on Grimgrams as Grimlock is forced to rely on readers for information he’s not entirely sure of. First Paul Reeve from Preston writes in to tell him that Sky Lynx has been released in the UK in a “Very British box”. Grimlock reveals several readers have mentioned this (and that you can get Trypticon too), but he wants one of them to send in the packaging of the toy so he can confirm it, presumably because Hasbro UK are insisting they’re not out. He also draws a blank on what the Universal Greeting actually means.

Michael Wrightson from Carlisle also reveals to Grimlock that the first VHS tape with season three episodes on it has been released in the UK (Starscream’s Ghost; Nightmare Planet and Ghost in the Machine), and asks about the episodes claiming the Quintessons created the Transformers. From the tone of the reply it actually feels as if this might be the first time Furman has heard of the alternate origin, and he’s incredibly scathing of it. Though he does come over as relieved that with there being a tape out it might stop kids asking where they can see the series set after the film.

Action Force doesn’t have time for self doubt as Sergeant Slaughter arrives at the Pit. This results in an unfunny sequence of padding as he beats up his new fellow troops because they challenge his presence due to the intruder. Slaughter will vie with Roadblock be the focus of all the very worst xenophobic tendencies of Hama- basically imagine how bad a book with a subtitle like “A Real American Hero” could be- so we probably got off lightly here with some simple mindless violence.

Hook and Hotspot are the focus of AtoZ, whilst Combat Colin’s attempt to use Kung Fu on the robot hurts his hand so badly he has to go and cry off-panel because he doesn’t want the readers to see it. This is a simple gag, but has a lovely pained expression on Colin’s face as his hand throbs with pain.

Next week, Headmasters on Earth! The Next Week box actually shows you what the cover for issue 156 was intended to look like (with Hardhead standing in front of a blue sky) before someone decided it wasn’t sexy enough. The result, as we’ll see, will be more than a bit mixed.

One final bit of housekeeping though. I never managed to do a special post on the acknowledgements section for the book, so presented below is the full list of names as they stand at the moment. If you would rather be thanked under a different name (say, if you’d rather use your real/full name so as to impress your friends) or if you think you’ve helped the blog in a major way and I’ve left you out- and I will have left at least one out thanks to sod’s law- do let me know.

There are two men in particular without who this project would never have started. The first in Tom Prankard, who not only sold me his entire 332 issue collection in one go, saving me a huge amount of time and money, but also very patiently did the scans of the series I use for the website.

The second is my good friend Michael Reynolds, who drove said comic collection across the country for me, saving me a huge amount in postage costs.

The book edition is only possible thanks to Andrew Turnbull. He created the cover, formatted the text and provided invaluable assistance to this Lulu virgin, and he is fully deserving of the credit I’ve given him of “Editor”.

This book is dedicated to these three great men.

I also have to thank everyone who has commented on the site over the years; a lot of the changes and corrections you’ll be seeing are down to the input of others. Rather than, as I try to do on the blog, crediting every person who has contributed as I’ve gone along, I’m going to thank the most prolific of helpers here at the start to avoid the repetition of “As reader X has mentioned...” Here are the people who have helped hugely to make this a better book just by taking the time to share their thoughts:

As said, they’re the most substantial contributors, but everyone who has commented even once has made a vital contribution. Thank you all.”


The best thing is, if there does wind up being a volume 2 of the book, this last section will be cut from it. Making this a super secret for the website readers. Whom I like more than those book buying suckers. Shhhh, don't tell them. 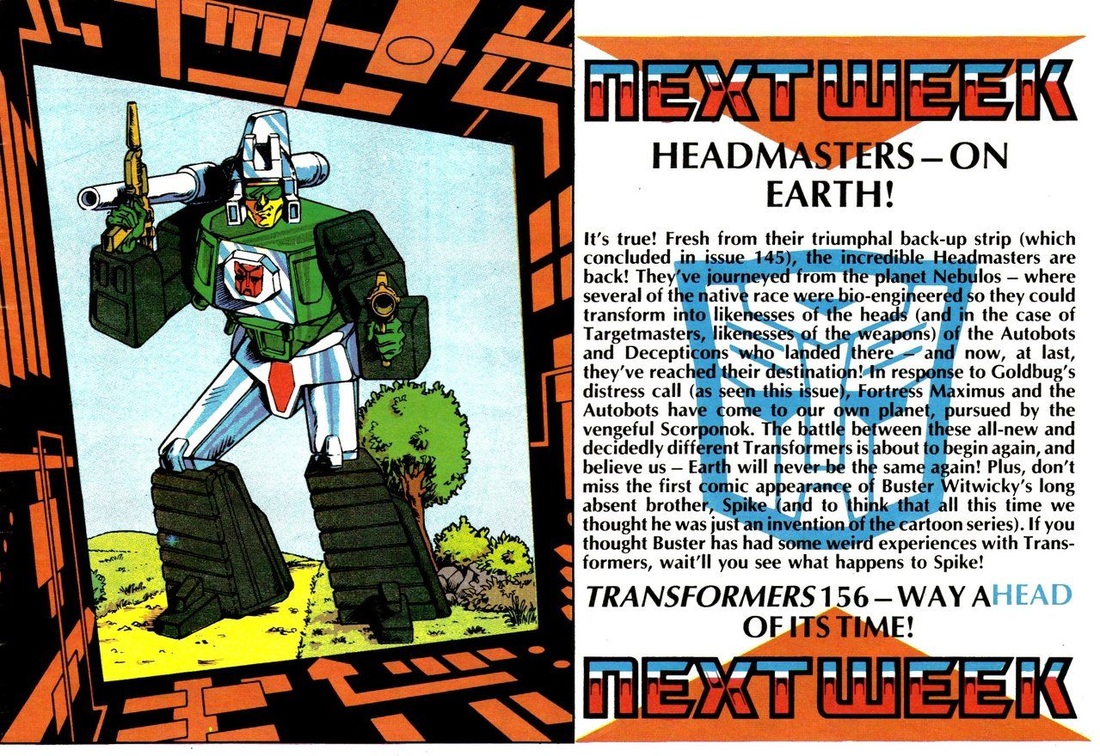