I'm Not Your Toy. 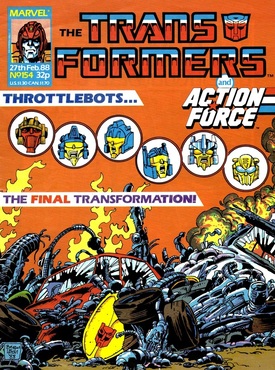 This is the kind of toughness the people want from their leaders Walter.

It's only a small thing, but Toy Soldiers! has what I consider to be one of the best story titles in the entire Marvel run. It's clever, very meta and works on more than one level. Or at least it would if it didn't turn out to be terribly literal, but it's still a nice title and it's a shame it wasn't used for the relevant Titan trade.

In terms of the contents, this issue was always going to have a tough act to follow coming off the back of an extremely strong run of home-grown stories, and it's not helped by the fact it's been more than four months since the Throttlebots were taken captive. With Budiansky having to leave plots dangling as he jumps back and forth between them and promoting new toys this would be a problem even without the British stories, and it must have been hard for contemporary readers to keep hold of the various threads.

The real surprise in the first half of this story is how serious it is. This is an issue where the Throttlebots have their brains placed in toy cars; you can easily imagine this as one of Bob's sillier adventures with lots of groan inducing comedy. Instead it's played completely straight, with the closest thing to a joke being a RAAT security guard commenting on the damage the titular toys will do to Barnett's carpet.

Not feeling so much like a gold bug these days.
The atmosphere is actually funereal throughout, from Bryan Hitch's bleak cover of smashed Throttlebot's down. As a result of increased Decepticon activity- and though they're basically irrelevant beyond this the two action scenes that open the issue of the Predacons and Constructicons stealing stuff and nicely handled- III have had enough and Forsythe orders Walter Barnett (who has put some weight on under Jose Delbo) to finally crack their prisoners.

His conversation with the power-drained Throttlebots is handled surprisingly well, with Goldbug resigned to his position in a rather sombre way. After more than three years of failing to convince the US government of the difference between Autobots and Decepticons he's given up on trying to persuade them otherwise and just warns that if III don't start believing him it's humans that will suffer.

Barnett then shows he's struggling with the work/life balance as his family turn up at the office, but the main purpose of this sequence is to establish his son's toy cars and the fact security are used to finding them in Walter's briefcase when he leaves the building. However, as perfunctory as this is, it's nice that Bob has remembered Barnett has a family after their long absence.

The real darkness of the issue then kicks in as Forsythe announces on television that the government will no longer stand idle and if the robot attacks don't stop the Throttlebots will be destroyed publicly. This is effectively the United States (and dialogue throughout the issue makes this clear it is the government rather than III acting on their own, Forsythe talks about "This administration") announcing a state sanctioned execution. It's very at odds with the usual tone of the book, and it's hard to imagine a similar title going for a sequence of captured terrorists being hanged by Uncle Sam live on TV.

This is where the plotting gets a little clunky as, after years of being blind and deaf to the same arguments, Barnett suddenly starts to believe Goldbug. Presumably this is the result of their multiple conversations since the Throttlebots were captured rather than just the one we're shown, but with most of this conversion happening off-page it feels very sudden.

He'll be "No-Bar" in a minute.
Regardless of his motivation for changing his mind, Barnett quickly realises the Decepticons will immediately strike again in order to force the destruction of the Autobots, but can't persuade Forsythe of this, meaning he needs some early morning inspiration when he remembers both his son's toys and a RAAT technician talking about how small the robots' brain modules were.

This should in theory be where the issue completely falls apart, as the idea of him suddenly having the technical skills to remove the brains of alien living robots and place them in children's toys, even to the point they can still talk, is utterly ludicrous.

What makes it work is the sequence of the "Execution", even though how the Throttlebots will survive is very clear at this point there's a hard edge to their bodies being lined up and crushed one by one that makes the entire scene oddly unsettling. Especially as Forsythe carries on being a boring middle manager throughout, calmly letting Barnett go home early to beat the traffic as if they've just finished a meeting about paperclips.

If the now toy Throttlebots are going to get back to the Ark (the Wiki holds up the idea of Goldbug being keen to return to Grimlock as an error, but what else could he realistically do?) they're going to need help from an old friend. It's been six months since Buster last appeared and a lot longer since he's been a regular feature, so the last page cutting to him and Sparkplug bemoaning the destruction of the Throttlebots- especially as one of them seemed to be Bumblebee- actually has a nostalgic glow to it and means the issue ends on an appropriately bleak note even if it's not the strongest cliff-hanger.

Though of course, the real reason for the return of the Witwicky's is made obvious when Sparkplug reveals his other never before mentioned son Spike is coming home for the holidays. I wonder where that will lead?

Going into it for this reread, I was fully expecting to not enjoy this issue at all. Instead, despite a lot of the dialogue being a bit flat, it takes its silly conceit and makes a dark and sombre story out of it of the sort we haven't seen from Budiansky since the Return to Cybertron arc. I'm not sure what motivated him to play such an obvious gag story so straight, but it works very well indeed.

Maybe it's Humph from Matt and the Cat?
The Transformation sidebar is given over to promoting Doctor Who Magazine for reasons that soon become obvious when it reveals a mysterious popular Marvel character will be guest starring in the next issue. No prizes for guessing who, yes? The main part of the page does make a token attempt to pretend this is still an equal merger with Action Force (as does the Next Week box), but it's already severely downplayed from last week and Combat Colin gets as much of a mention.

After the clunky opening, the second part of Slaughter is a lot more straightforward and fun, basically being a big chase across the Pit as Action Force try and catch their mysterious shape shifting intruder whilst the Dreadnoks rather sweetly misunderstand the disguised Rip-Cord's desire for Candy. Beware though; you do get one of Larry Hama's more painful running gags as Trip-Wire trips over. As he does all the bloody time.

Combat Colin finally makes it to the robot menacing the town, and what’s interesting here is that (according to all round splendid chap Lew Stringer who was not only kind enough to respond to my pimping of last week’s piece on Twitter but also threw out some cool background information) Furman, with his editor’s hat on, specifically asked for a robot to be included in the first story so as ease Colin and Steve into their new home for regular Transformers readers.

Grimlock actually comes right out and says the American stories are inaccurate in response to a question from Damiano Polcaro of Roston about his behaviour during the Teddy Bear IN SPACE storyline. Grimlock is completely firm that he never intended to hurt either the kids or Blaster and he's had a word with the stubbies who didn't convey this properly.

There's also a letter from Thomas Goosey of Chatham about the appearance of a Transformers toy in the now defunct Action Force comic. Though oddly it's about the toy being called by the wrong name (Jetfire rather than Megatron) instead of asking what this suggests about the two franchises supposedly sharing a fictional Universe.

Next week, batteries are not included with the Throttlebots.

As a final note, The Book version of the first third of this site is roughly on schedule (as of today I'm up to issue 26 and the book going weekly), it's a laborious process going through everything and checking and reworking it (2012 me was an idiot, this would be a lot easier if he’d done it properly the first time round), but the text should be done by the start of June. Watch out for a special blog post in the week containing the acknowledgements page, I want to both make sure all the major contributors to this site are credited in the way they want and that I haven't missed out anyone really obvious (inevitably I will have). 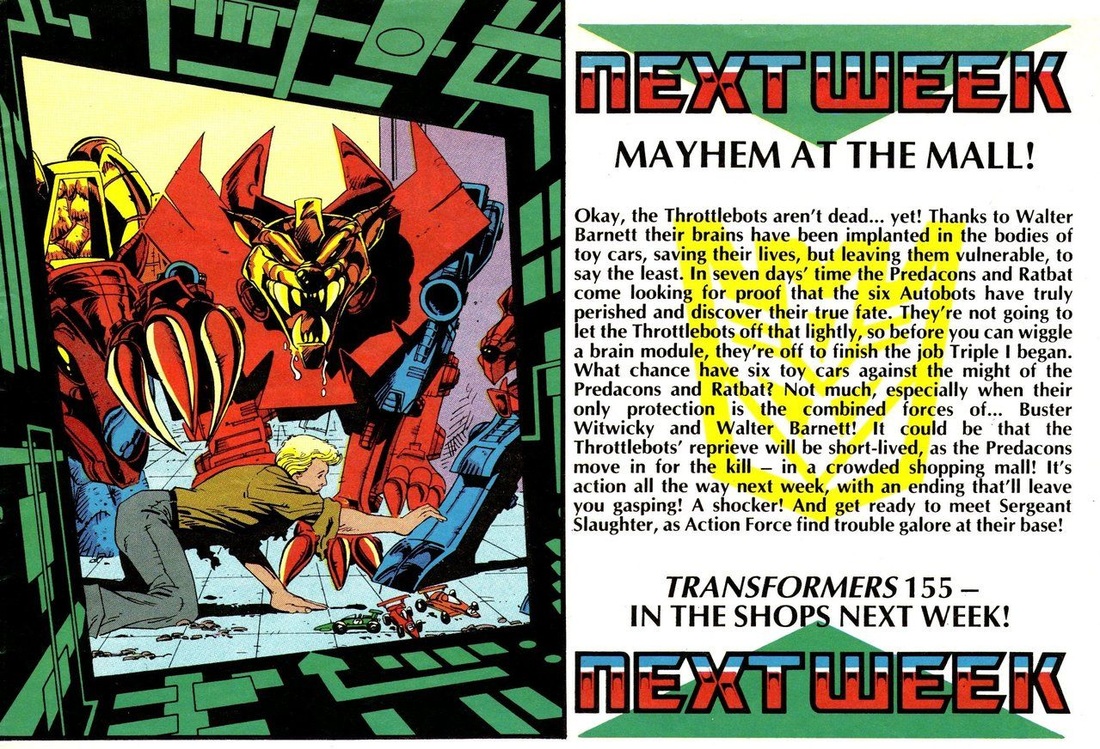