You Dream About Going Up There, But That is a Big Mistake. 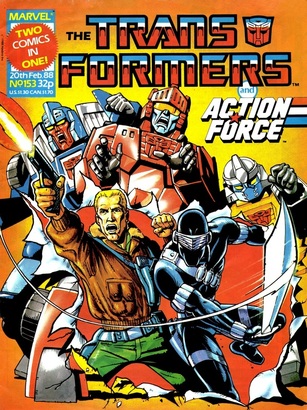 Look at Fizzle's face on the cover, he's completely terrified at the very thought of Snake Eyes daring to intrude on his giant robot comic. I don't think we've ever seen such a look of complete and utter despair on the face of a Transformer before. It likely reflects not only how Simon Furman feels about the merger but also the thoughts of the majority of readers who didn't like Action Force enough to buy it in the first place.

Before we get into the nitty gritty of the "Two comics in one!", let's look at the continuing machinations of Galvatron. Sadly the undersea action is less exciting than last week, mainly because Pirranacon is just a big lumbering mostly mute brute, meaning we don't get any of the nice little character moments the individual Seacons received. It doesn't help that the battle is a foregone conclusion; Galvatron could end it at any time and is only dragging things out so as to put on a show for the other Decepticons. Or rather for the readers so as to make sure this fills two issues. The main area of interest comes from wondering exactly what Galvatron is out to achieve. 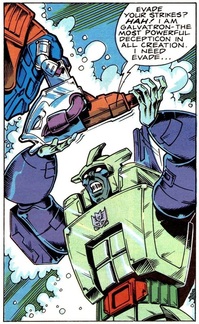 FISH FOOT!
If the Pirranacon fight has lost some of its momentum, the other two threads of the plot are still carrying on full pelt. Up on the surface the fight between the Sparkler Mini-Bots and the Firecons is just glorious, mainly because the Firecons are such fun villains. They not only look memorably grotesque but also have a decent gimmick with their fire breath and a nice line in gallows humour. This peaks in an excellent combination of horror and comedy as Fizzle is set alight in the nastiest way possible as Flamefeather makes a crack about his name.

The Mini-Bots have a similar, if visually less impressive, gimmick of being able to shoot fire out of their engines in vehicle mode. You can forgive Sizzle forgetting their new vehicle modes can still do this, but Guzzle taking so long to realise he turns into a tank is a somewhat painful moment, but that aside this entire sequence is just gleeful.

Glee is not an emotion Shockwave is feeling as he watches Pirranacon get his haddock handed to him, instead he's on the verge of a full on breakdown as he realises there's little he can do to stop the future Decepticon coming to kill him. His one remaining ray of hope is that the rest of his troops can take Galvatron down.

The best laid plans...
This is where the rug is pulled out from our expectations as Galvatron blasts his way into Shockwave's base and the stage seems set for another epic fight. Instead Galvatron calmly and politely reveals to all present that he instead came in peace and only defended himself against an unprovoked attack. He really twists the knife in by claiming he was interested in a joint leadership, just as Soundwave suggested (and knowing Soundwave as well as he does it's likely Galvatron was able to work out this had come up), effectively he makes Shockwave look a fool before his troops and neatly plants the seed in their minds that all future violence is entirely his fault.

This is a much more satisfying scheme than Galvatron's previous volcano shenanigans, showing him at his smartest and most cunning, with the reader actually fully onside as he cheerfully walks away in a self satisfied mood at successfully ensuring he won't alienate his future troops when he does take down Shockwave.

The above and below plots then meet in the most delightful way after Galvatron finds Fizzle's body (after he fell into the sea to cool off) and interrupts the beach battle with an incredibly polite "Excuse me, but does this belong to you?". Again, expectations are subverted as this feels as if it could be heading for a third part with another big fight as the cliff-hanger. 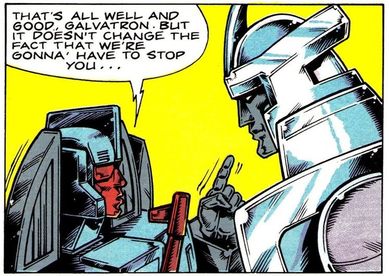 "You're a very naughty boy".
Instead Galvatron just laughs in Flamefeather's face as the Firecon tries to recruit him on behalf of the Cybertron based Decepticons and then knocks Sizzle into a palm tree with one punch as the Autobot makes a token objection. The stunned expressions on the Sparkler and Firecons still standing as Galvatron saunters off is one of the greatest comedy moments of the entire series.

Things end on a twist though as it turns out Galvatron may have miscalculated in keeping his present day counterpart on the hook rather than killing him off. Shockwave has had chance to compose himself and regain his logic, realising he needs an expendable agent who could beat Galvatron in a fight. Like the missing Megatron...

Though the weakness of the Pirranacon sequence means this isn't quite at the same level as the first half, overall this is a strong contender for the best two parter the series ever did, perfectly balancing drama, comedy and action with a deftness of touch that shows Furman on fine form. Jeff Anderson also does some of his very best work, even if he does have Sizzle threatening Galvatron with a gun when it's a plot point they don't have traditional firearms on them. 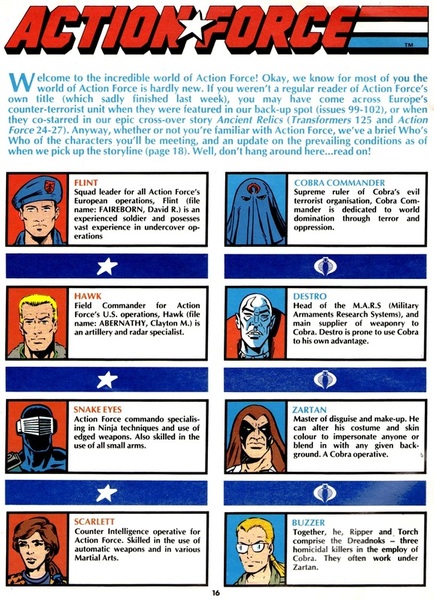 The special Action Force character page.
Before we delve into Action Force, let's look at Grimgrams, the one part of the comic not to be all about it. Andrew Jones from Frome asks when we'll be seeing the cartoon series set after the movie. Grimlock can't be sure when this fictionalised account will reach their shores but does assure us the book is working towards providing a "Sneak Preview" of an episode in comic form. Suggesting Furman was already tearing his hair out about how to fit in The Big Broadcast of 2006 (published in April in America so he presumably knew it was coming by this point), if the idea of just presenting it as a straight up tie-in to the cartoon was ever seriously considered this was likely scuppered when Furman realised the third season was never going to come to ITV. The final solution will be more novel as we'll see.

As an interesting aside, the splendid Primenova on the TMUK forums has this week made me aware of the fact Big Broadcast was not the only episode up for adaptation as a filler issue. Pages of art by Ian Akin and David Hunt from an unfinished version of The Dweller in the Depths have surfaced, suggesting American editor Don Daley wanted to create as much potential filler as he could as quickly as possible, something made easier by adapting pre-existing material.

This was likely driven by Budiansky being so eager to leave the book at this point, increasing the likelihood of the need of a quick stand in if he did up sticks quickly. There's no credited author, but as Broadcast was adapted by its author that raises the tantalising prospect of Paul Dini having been at least offered first refusal.

Blast, I can't put it off any longer, so let's talk Action Force. Such mergers were of course fairly common in British comics, but most British comics were proper anthology titles that could more easily add one or two of the popular strips from a faltering title to their own ever changing line-up. A full 50/50 combination was much rarer (possibly even unprecedented), so it's easy to see why Furman was so reluctant to add the baggage of a failed book to his own and why this will be the one and only issue to act as a genuine joint title. 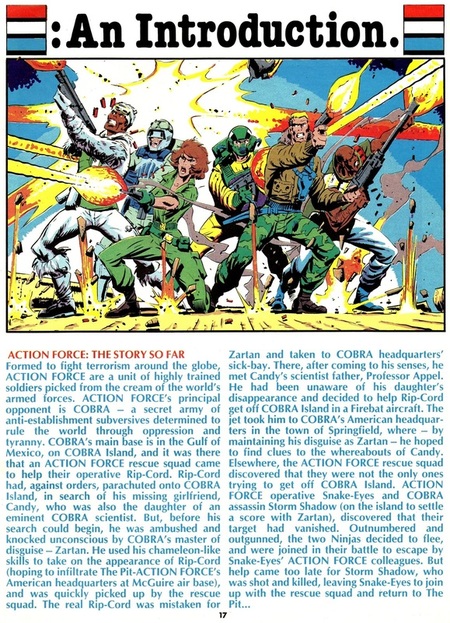 The special Action Force recap page.
For now though, former Action Force assistant editor Steven White provides a brief summary of the major characters and a recap of the story so far. This later feature is badly needed as this reprint of Slaughter from issue 48 of G.I. Joe is a terrible jumping on point, even by the standards of a series that was a rolling soap opera. It begins with a seemingly dead Storm Shadow on a beach before becoming a tangled web of double crosses and mistaken identity as Rip-Corp and Zartan have taken each other's place at their respective bases for reasons too complicated to go into but connected to Rip-Cord's hunt for his missing girlfriend.

This isn't a plotline worth investing in however as it will get lost and smothered amidst Hama's ninja obsession- fully on display here as everyone is keen to point out how awesome Storm Shadow is as a ninja- before Rip-Cord eventually finds out about her death in a throwaway "oh bugger, I forgot about that" scene long after the fact.

The main attempt to get new readers on side is to open with a full page splash that includes a view of the Baroness' leather clad behind in all its glory. Which no doubt inspired a splash of a different kind in many readers.

More excitingly, we get the first Transformers instalment of what is the one and only good thing to come out of the merger: Lew Stringer’s Combat Colin. We've already met him back in the Ancient Relics! crossover, but this strip has him stopping sidekick Semi-Automatic Steve before they can go off to fight a robot to explain the setup to those who didn't read the sister book (i.e.: everyone). The gag being he didn’t realise that Transformers has only given them half a page (for now) compared to the full A4 they enjoyed in their previous home, meaning there’s no room for an exciting fight with a robot after all. Robo-Capers took a while to find its feet, but here we have the advantage that all the hesitant first steps have already been taken, meaning Combat Colin (fun fact: Stringer originally wanted to make the Rambo spoof more explicit by calling the character Dumbo, but it was felt this reference would date too quickly. No sane person could have imagined Stallone would still be milking that three decades later) arrives fully formed and hilarious.

Next week, it's back to Bob and the fate of the Throttlebots. 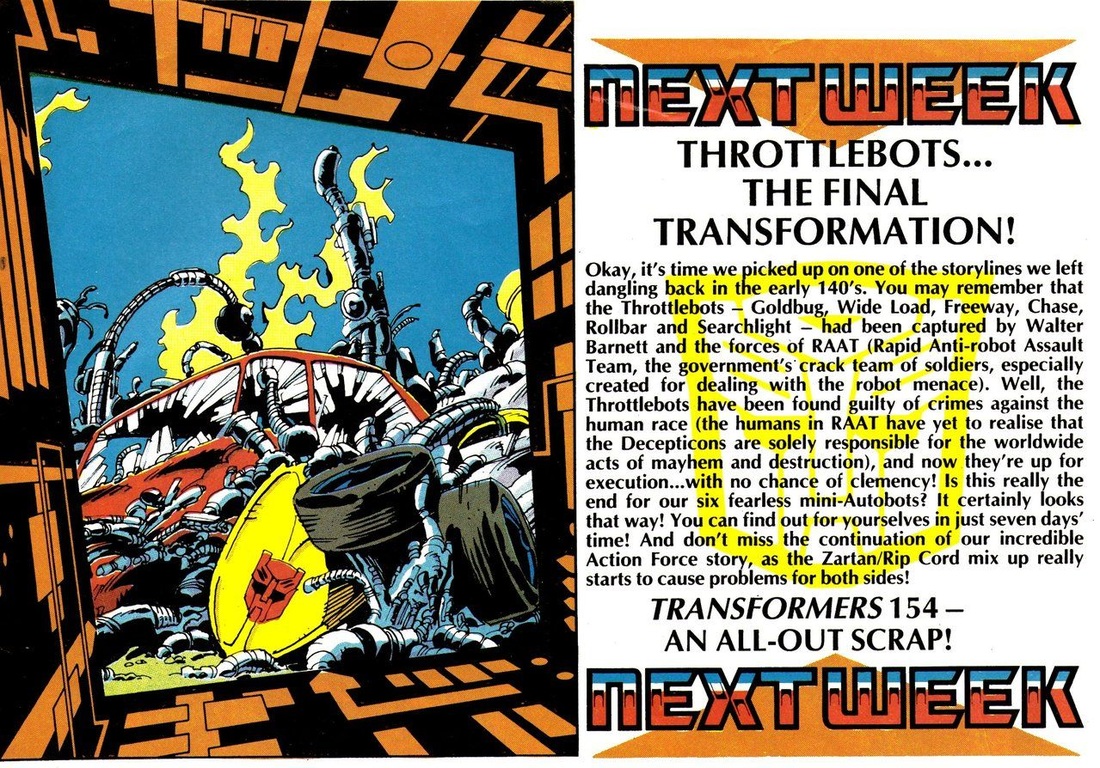 The main thing Action Force brings to the book.