The Seaweed is always Greener, in Somebody Else's Lake. 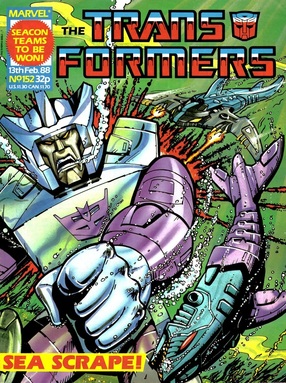 What is this? Shockwave sends fish against me? Does he expect me to laugh myself to death?

We've just come off the back of what is the biggest (in terms of scale if not length) story the comic has yet done, a massive war epic covering millions of years of history and two planets. Furman almost certainly remembers the anticlimax that resulted from Aerialbots Over America! following Target: 2006, so how does he make sure this simple little two parter doesn't wind up underwhelming the audience that were wrestling with gods and monsters the week before?

The smart move Furman makes is to bring Galvatron, effectively the book's lead villain who hasn't been seen in a regular issue for six months, back into the fold. Meaning this can be a small contained story but still one that carries a weight for long term readers.

It also sets the stage for how the Galvatron arc will be handled between now and Time Wars. The big UK stories of 1988 are, as we've just seen with the first one, mostly self contained. Each will touch slightly on the ongoing plots, but otherwise Legacy, Space Pirates and the Flame Saga can be read in isolation with little prior knowledge of the series. The real forward momentum is going to be amidst the two and one part stories, with Enemy Action! as the first step on the road to the epic conclusion we are now less than a year from. 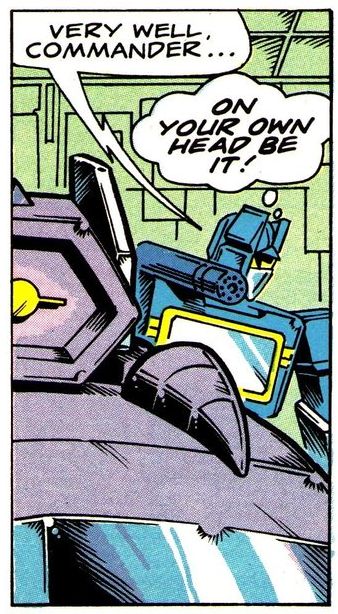 Not a good few weeks for Shockwave, in any timeframe.
The story itself is nice and simple. Galvatron has escaped from the volcano (neatly after how drawn out his absence was, there's no mucking about here as he's present from the start with the explanation saved till later) and is walking across the seabed towards the Decepticon's base. Shockwave has a choice, to fight Galvatron or do as Soundwave suggests and try and reach a settlement. He can see the logic in using their mutual Decepticon background to find common ground, but fear of losing command makes him push for a fight.

This is just a glorious sequence and follows neatly through on the idea from way back in Robot-Buster that, for all his self control and logic, Shockwave is covering up an insecure and irrational inner nature that is always in danger of coming to the surface. If his buttons get pushed in the wrong way he'll make bad choices. Soundwave, who of course knows the cost of going head to head with Galvatron, is also brilliant here, raising his concerns in a firm but respectful way fitting to a second in command, but leaving little doubt as to his true thoughts. The brief moment of hesitation and "On your own head be it" thought bubble neatly convey exactly how precarious Shockwave's position is.

In order to carry out this potentially unwise pre-emptive strike against Galvatron, the Seacons are pressed into service. As six of 12 new characters to debut within just 11 pages it would be natural to assume this is another Hasbro mandated toy advert story. Interestingly, according to the interviews in Classics UK Volume 5, this was not the case. Furman had the common sense to keep up the reciprocal relationship with Hasbro, but this was very much his own idea, the appeal being the chance to use a load of present day characters Budiansky will be mostly ignoring (when the Seacons finally show up in the American stories it'll be very clear Uncle Bob has little love for them), plus Furman flat out admits he likes the idea of an underwater team. 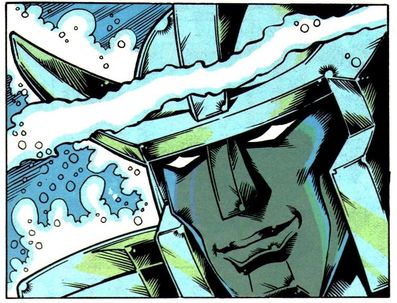 Smartest man in the room.
So even if there is an element of housekeeping here, you can very much tell this isn't another Worlds Apart or Second Generation! where Furman was less than enthused about the characters he is required to bring in, here he's having fun. Each Seacon gets their moment against Galvatron, and though the future Decepticon is mocking of his fishy foes his incredulity is not reflected in their writing where each beat is nicely handled and well done (even if someone along the line has gotten confused and called Overbite "Jawbreaker"). I especially love how Galvatron's smugness at how pathetic Seawing looks is subverted when his arm winds up briefly paralysed from the fish's lasers.

Obviously with Galvatron being a lead villain the Seacons are still no match for him, but by the standards of Galvatron fights they do respectably, even if Snap Trap is annoyed at having been undersold the true strength of their opponent. They're forced to combine into Pirranacon, but the overwhelming feeling as we leave this sequence is that everyone is playing into Galvatron's hands, something Jeff Anderson nicely conveys with a wry enigmatic smile.

An enigma isn't quite the hook needed for a cliff-hanger though, so for the final three pages we cut back to the surface and the six remaining new characters. The first three of these are the Sparkler Mini-Bots (another name change from the American toys), who are going to be one of the nice understated successes of Furman's writing. Guzzle, Fizzle and Sizzle aren't especially fancy characters, but they do have a nice straightforward likable style that makes them very appealing. 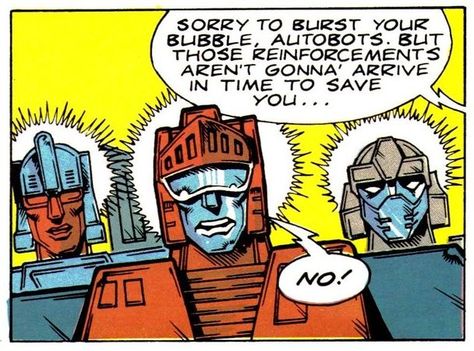 "Our colours are wrong! Ah well, we'll run with it".
Their purpose here is mainly exposition, reporting back to Springer on Cybertron that their observation of the volcano has resulted in Galvatron breaking out. It's straightforward but I have a fondness for this page as I own the original art. Their space phone call is interrupted by the last of our new characters forcing their way in, the Firecons have arrived!

This is an extremely tight fast paced issue that manages to pack a hell of a lot into 11 pages, especially as one of them is a splash. We get a wide ranging fight, political machinations, three different locations and 15 featured characters. The skill with which Furman balances all these elements nicely shows just how much fun he is having here.

On art, if Anderson was somewhat out of his depth with the psychedelic mindscape he was called upon to create two weeks ago, here he's playing to his strengths. The action is all well conveyed and his straightforward neat style means the mess of characters never becomes confusing. The only odd note is the colouring, which seems to be working from an early scheme for the Seacons and mixes up Fizzle and Sizzle, otherwise though, this is a fine looking issue. 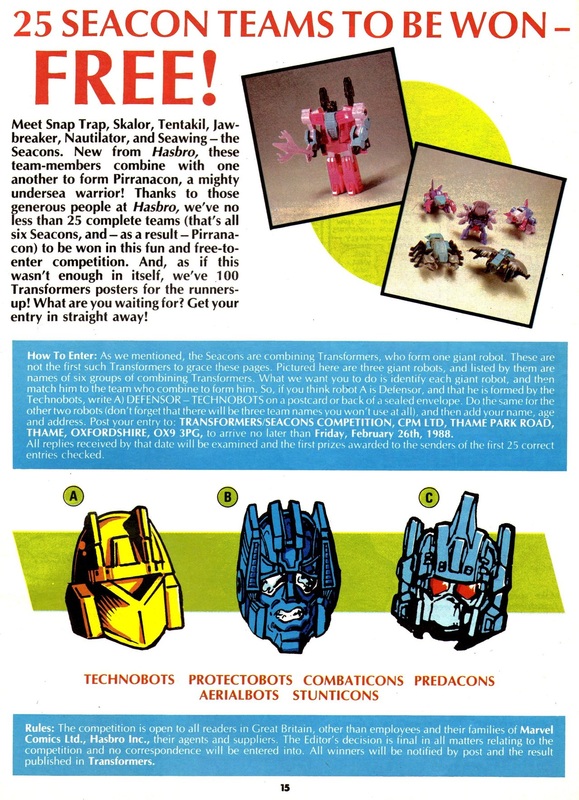 Defensor is having a poo.
﻿Amusingly Transformation is still trying to create an air of mystery over what will be happening next week, encouraging readers to turn to page 23 to find out. Could this have anything to do with the cancellation of Action Force? Well obviously it does, we were all paying attention last issue. And if anyone did miss it, the poorly created advert is run again on the back cover in just the sort of place kids are likely to see it before reading the comic.

Robo-Capers is moved from its usual place beneath the Next Week box to the middle of the issue for its final instalment, and sees the robots go off on holiday to Earth. The depressed King Nonose then realises that after three years of trying to invade Earth all his plans have failed, so he and his scientist chum (who I don't think has ever been named) chase after the ship to go on holiday as well.

I wasn't a big fan of Robo-Capers back when it started, mainly considering it an inferior prelude to Combat Colin. However, either it has improved a lot as it has gone on or my silly bias has abated, but I've been especially enjoying its balance of silly humour and more pointed commentary over the last year (which carries on till the end as one of the robots makes a parting shot about cultures imposing themselves on other societies), and will be missing it much more than I would have expected.

On Grimgrams Brian Stuart from Dublin asks about future Collected Comics, with Grimlock explaining both that the Easter book will likely be Robot-Buster/Devastation Derby!, and that when they get around to doing Target: 2006 it will likely cover several issues. Which is almost right. Justin "Intelli-Bot" from London asks about Grimlock's varying intelligence levels between the British and American stories, though in this instance he doesn't get a straight answer.

Iron Man reaches a rather bleak conclusion as Stratosfire is killed and Sunitron loses his powers in the process. At the end both the surviving heroes are left to wonder if Stratosfire was right considering the worsening world situation of the late 1980's. This has been a very solid story, and the downbeat ending feels appropriate considering what is going to happen next week, even if a final gag advert for Stark Enterprises' Malibu headquarters does somewhat kill the mood.

So here we are at page 23 and the shocking reveal that next week Transformers will be merging with Action Force. For readers with enough prior knowledge of the British comics industry this must have seemed like a death knell, as such mergers very rarely end well. It would have also seemed unfair as Transformation revealed Action Force will be getting a new monthly book anyway, presumably there's a contractual reason that requires a certain presence but it really doesn't need to be in two different series.

The way the Next Week page is laid out is even more worrying as it gives equal weight to Action Force and makes it look as if this is a full on proper merger. Thankfully this won't turn out to be the case and Action Force will quickly settle down into being second fiddle, mainly because as the editor Furman didn't think the two franchises belonged together and did everything he could to downplay it, but it's a worrying moment.

Next week: Enter the Firecons. And, less excitingly, the Forcies.﻿ 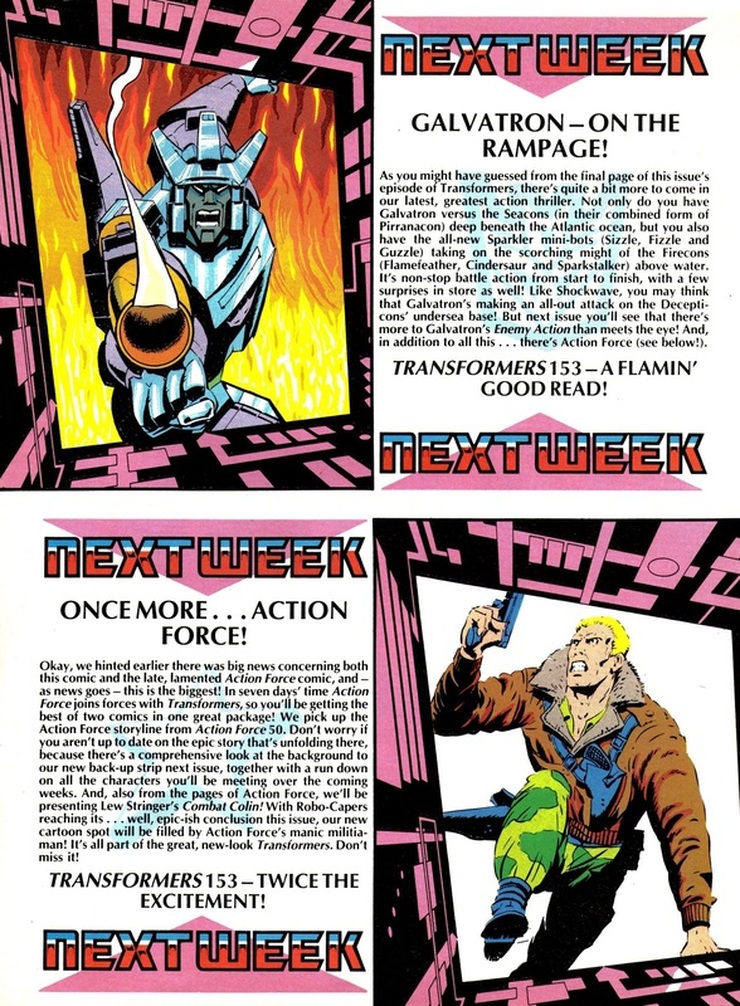 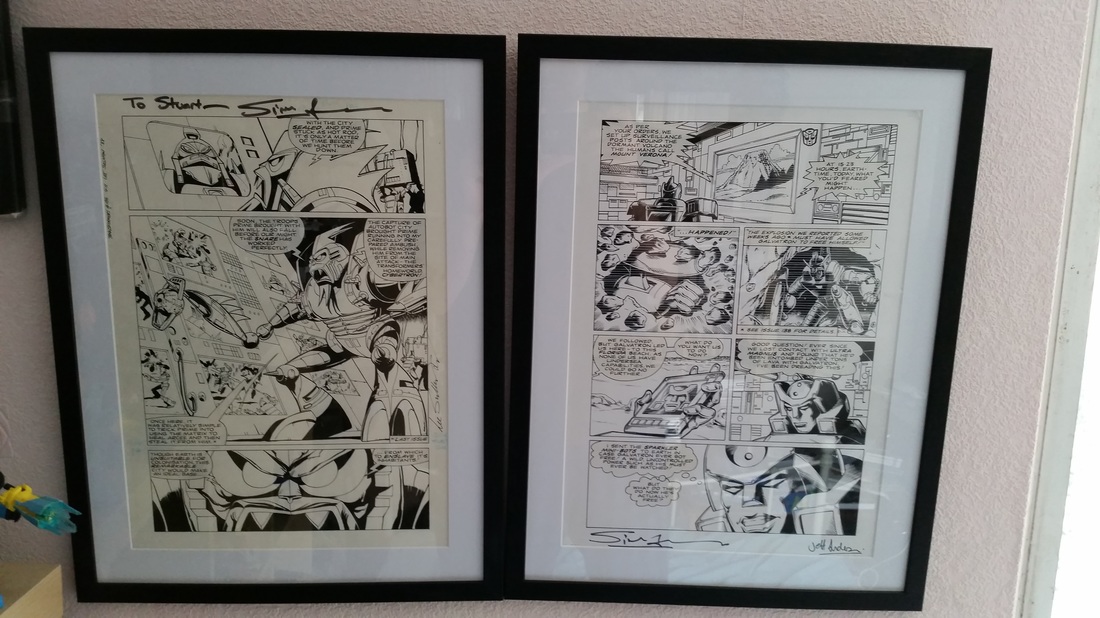 Expect me to show this off again come Space Pirates.