He's Tall and he's Dark, and Like a Shark he Looks for Trouble. 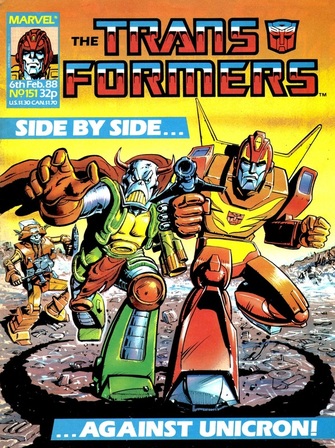 Considering this is the big conclusion to an epic six part story that's redefined the Transformers back-story and will also be the launching point for the Marvel UK shared Universe, it is perhaps odd to kick things off by talking about the art. But here it cannot be avoided, for the very good reason that the man behind the pencils is Bryan Hitch.

This isn't quite his first Marvel UK work (Transformation points out he's a refugee from the doomed Action Force), but the ludicrously young 18 year old did get his first break from Furman a year before when he happened to be the only potential artist around when a quick one page Death's Head was needed to secure Marvel ownership of him (a strip I'm not sure has actually been published as of this point in 1988, but all it needed to do was exist).

It was effectively inevitable that Hitch would wind up on Transformers, especially with Senior moving on (Geoff helping with inks here is almost a passing of the torch moment), Furman can clearly see the potential in this young talent and will cultivate it over the next year or so, with his time on Transformers being brief as he moves onto Death's Head before his relatively slow work rate and rising reputation sees other artists take over whilst his career trajectory went on to be little short of stratospheric.

Spotting the potential here is one of Furman's greatest achievements as an editor, with Hitch being easy to name in retrospect as the big success stories of this era of Marvel UK, and pleasingly his work here does not disappoint. It's evocative of the Senior style Furman clearly favours but still has a flavour all of its own, with a lot more detail and expression in the faces. It's not quite refined yet, but it's still the most impressive début on art we've had in a good long time. 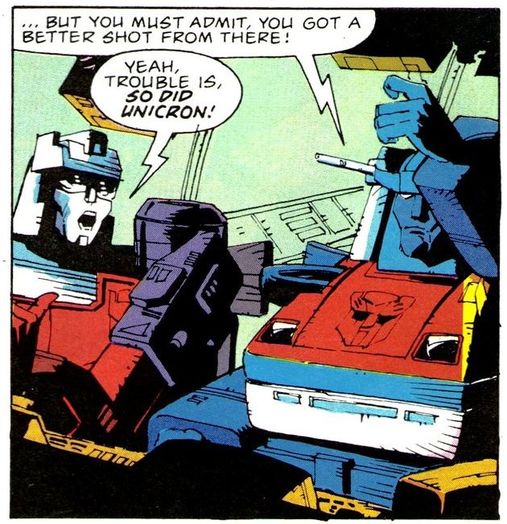 "Looks like you Scatter-shat yourself"
﻿﻿Good art of course would be pointless if the story wasn't up to scratch, and luckily any modern day Hitch fans looking back at his early work out of curiosity is confronted by a belter of a final instalment. The action as the Autobot shuttle dances around Unicron and the Dinobots fight Junkions is, as you'd expect, pulled off with a great deal of style. But Furman makes this more than just about big action as he examines the flaws and insecurities of those fighting.﻿﻿

Smokescreen is taking foolish risks flying the shuttle into Unicron's line of sight for the sake of a better shot, much to Scattershot's annoyance, all because of his feelings of guilt over Wreck-Gar and Inferno (nice to see him remembered after last week). This is actually an incredibly selfish action on his part, putting the lives of everyone on the ship at risk over his own desire for martyrdom and, even though we'll never get a proper resolution to the antagonism between him and Rodimus, it does give what would otherwise be a fairly perfunctory establishing scene some nice bite.

Rodimus is having his own troubles on the ground as well, as he comes to realise that setting the Dinobots on the mind controlled locals was a mistake as it means all they're doing is killing the people they're trying to save... But how can they hold back when the Junkions aren't? It's a good dilemma, and it's always nice to be reminded the Dinobots are extremely dangerous psychopaths, something the IDW one shot Punishment also recently did to great effect.

In the midst of all this, Unicron summons Cyclonus and Scourge back to the Planet of Junk, officially to provide air support against the shuttle but mainly to set up how that continuity error created by Headmasters is going to be fixed. Still, seeing them flee the field gives Soundwave a nice moment where he gets to take charge and declare "Screw this" before calling a retreat.

Back on the Planet of Junk, Death's Head approaches Rodimus and gives the ostensive lead of the series a chance to join in on the main plot. It's a great scene as Death's Head is as cool as ice in the face of Prime's anger, calmly pointing out he hasn't killed Wreck-Gar and is no longer under mind control, before playing his ace of revealing he knows how to kill Unicron. However, it's also a scene that really hammers home how much this is a Death's Head adventure in all but name.

What follows is basically a cheat to try and hide this fact. Rodimus and Death's Head team up and use trickery to make Unicron try and dominate the mechanoid's mind once more, with the mystical hand wave of the Matrix being used to allow Rodimus to jump through this link and into the psychedelic astral plane from last week, on the assumption made by Death's Head that opening the Matrix there will destroy Unicron.

On the surface this seems to give Rodimus a central role in the conclusion of the drama, but in fact it's an irrelevant sideshow. The Matrix not only has no effect on Unicron's astral form (drawn so differently from Anderson's take that presumably there was no chance for the artists to consult each other), opening it there would actually make him more powerful. This is basically a feint to make him look important whilst Death's Head actually sorts out the plot, and to add insult to injury the Autobot leader has to learn about the secret origin of his species off-panel second hand. 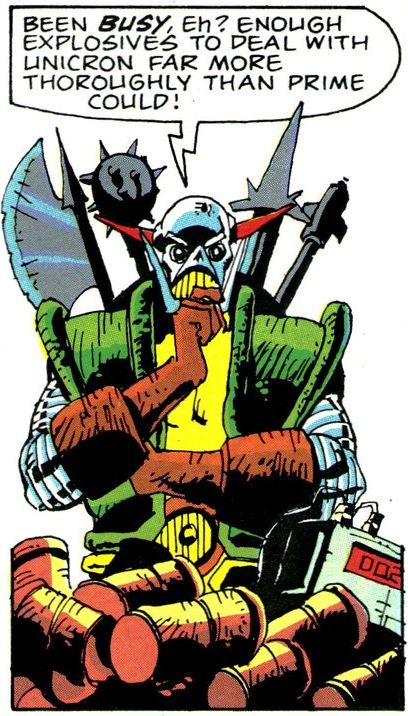 "No one would buy Rodimus Prime Monthly".
Over in the actual plot, Death's Head finds Wreck-Gar and quickly realises that the explosives will do a better job of finishing Unicron than the Matrix. Retrospectively this is one of the nicest things about this story, as only Unicron's second appearance the overuse of the Matrix in defeating him is yet to become an annoying cliché. A story that subverts this and comes up with a different, if straightforward, means of dealing with his is very welcome and shows Furman has put some real thought into avoiding the obvious. Unicron wouldn't be defeated by something other than the Matrix for another two decades until the final Devil's Due published G.I. Joe crossover where Cosmos kills him by throwing exploding mushrooms at his brain.

This is where Furman's careful plotting pays off as all of the pieces fall neatly into place for the last two pages. Death's Head saves Rodimus on the grounds he's a client, and as such goes to kill Cyclonus and Scourge as they arrive despite the explosives. As the bomb goes off, he chucks the two of them into Unicron's time portal so as to "kill you both another time, yes?” The issue then ends with Unicron's physical body destroyed and his soul contained within the Matrix (a detail the series will eventually return to, it's smart of Furman not to try and pretend Unicron is gone for good), whilst Cyclonus and Scourge end up under Scorponok's command in the past, neatly tying up that loose end.

Or at least no trace until April, where he'll carry on the merry dance to his own book with a guest spot in Doctor Who Magazine.

Though Legacy of Unicron! wound up feeling less cohesive when read at a weekly rate than I remembered being the case, the different feel every week added to the story rather than distracting from it, creating what may well be the very best "Big" British story of the series. It is shamelessly about Death's Head first and foremost, but it still works brilliantly. Effectively it forms half of a bookend of epics to 1988 along with Time Wars, and of the two it is by far the better. 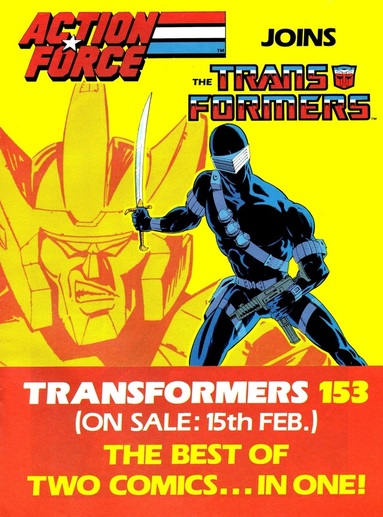 Must have taken about thirty seconds with a pair of scissors and some prit stick.
Transformation is clearly pleased about having Hitch onboard, and also about the return of Galvatron next week along with the 12 (!) new characters being introduced in what is just a two parter. As well as a competition for Seacons, issue 152 will also have an exciting announcement about the future of the book. I wonder what it could be? Grimlock hints at this as well when he tells Matthew Richards from Hindhead that the replacement for Iron Man as the backup will be revealed next week as part of the same major turning point for the book.

All this coyness in an attempt to build up anticipation is rather undone by there being a full page advert blowing the secret by declaring "Action Force is joining Transformers". As well as being a hideous and clearly thrown together quickly advert (made for the last issue of Action Force presumably) it must have been rather a shock to readers of the time to learn about this merger in such a brutal fashion.

Grimgrams is all interactive this week as Andrew Grant from Shirley volunteers to carry out the 1987 reader survey and Jeremy Godwin from Abingdon sets a riddle that Grimlock turns into a. competition with a Special Teams member as a prize. He also has to disappoint James Dessaud from Felixstowe by telling him there's no chance of the book reprinting Machine Man.

Iron Man hurtles towards the end of his association with the book as he and Sunturion try and stop Stratosfire destroying a shuttle launch that allows for some ripped from today's headlines references to the Challenger disaster and Regan's Star Wars project.

AtoZ covers Headstrong and Hoist, whilst the penultimate Robo-Capers has a wry joke about the pointlessness of mutually assured destruction along with a nod at the Daleks.

Next week, 12 new characters! Plus the end of an era as the traditional backup strip reaches its final instalment. 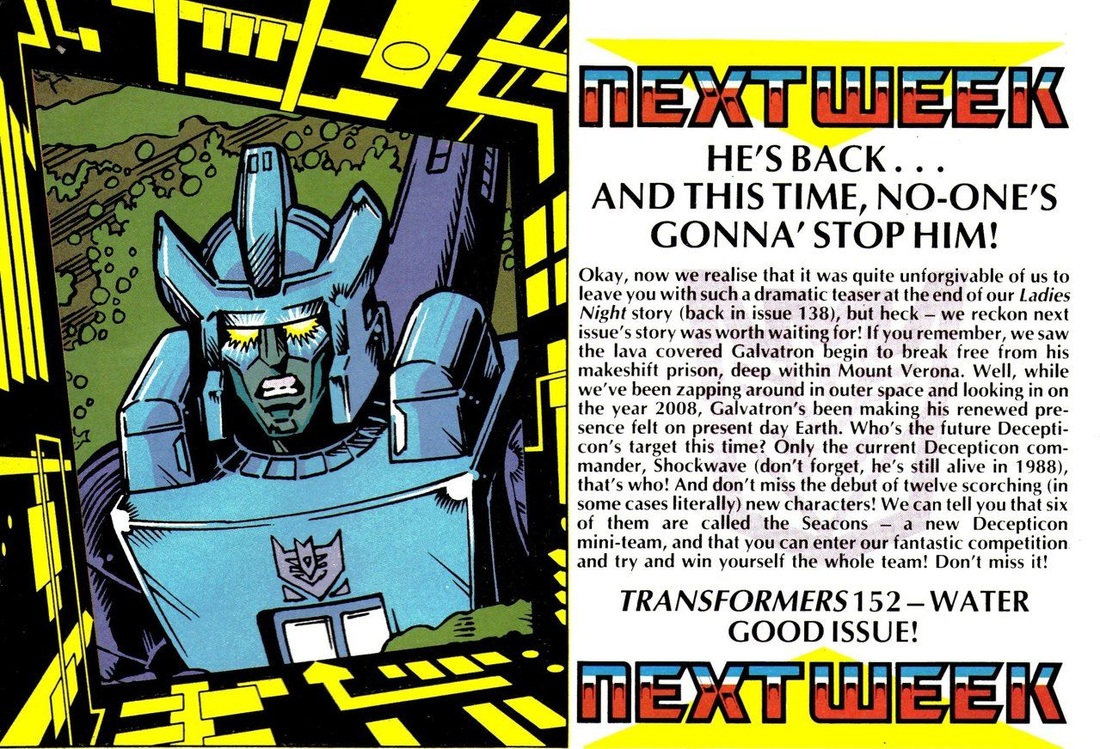