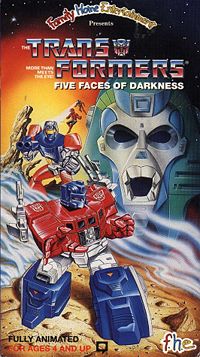 Pay us no mind, we just like to watch.

One thing that’s very easy to forget now that the Primus origin is so predominant is that the cartoon’s take on the concept actually preceded it by some 16 months. Considering the cartoon stayed in circulation longer than the comics thanks to syndication and videos (plus, a lot of What Counts in the early days of fandom was decided by Americans, and they didn’t get the Primus origin until the book was well past it’s decline) and thus has tended to trump the comic on an awful lot of things from the characterisation of Soundwave down to what name the Witwicky’s son has, the Quintesson origin had rather a head start in becoming the definitive one.

Primus winning out is largely down to the dumb luck of the Beast Wars cartoon using Primus as a swear word due to the writers looking up appropriate Transformers bad language via whatever means people did that sort of thing on the internet in the days before Google (you probably had to wire up a stone tablet to your dial up). They were surprised by the fan response and built upon it, unsurprisingly especially so in the final two-parter co-written by Simon Furman. As American fandom regarded Beast Wars as a sequel to the cartoon, they began trying to mesh the two origins (Quintessons found Cybertron abandoned after Primus created it and took it over?), before subsequent cartoons and comics made even more play of Primus, eventually seeing even the die-hard cartoon fans move on from the series’ take on events, at least before Primus and Unicron started to become overused anyway. the fact that a lot of writers, in the days before individual wikis for subject became a proper thing, would often use the Simon Furman written and hugely biased towards the comic Ultimate Guide as reference material likely helped them lean that way as well.

The point here is that the superseding of the Quintesson origin has very little to do with its quality, and things could very easily have gone the other way, as I noted in issue 150, the “Robots rise up and overthrow their evil masters” is exactly the back-story any single person other than Simon Furman would have come up with if asked to do so. 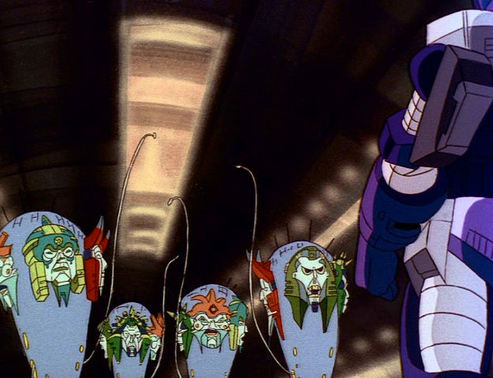 UKIP unveil their Parliamentary candidates.
Before we look at the origin itself, a quick word about the overall story, which as I suspect you know, opened the third season of the cartoon and is set in the immediate aftermath of the Movie. This isn’t going to be a full review, but safe to say it’s a rather disjointed mess. There’s a tremendous amount of good material in here; mad Galvatron is fun and Blitzwing gets some genuinely brilliant character development. But it’s all over the place and has random moments that could well have been better as one off episode (the Olympics); the film hardly has a linear plot but is perfectly cohesive compared to this.

If Flint Dille wanted to show that he should have written the film solo, it’s rather a failure. I went to make a cup of tea and a sandwich during the Goo sequence on this rewatch and didn’t seem to have missed anything when I came back, not to mention that the part 3 and 4 cliff-hangers are so similar they reuse (bad) animation of the Decepticons attacking.

It’s also a rather arrogant story in that it assumes the viewers have all seen the film and no concessions need to be made for them, a cold open with the end of the movie and a brief and unhelpful voice-over are all you get. You can watch the entire thing and not actually know Optimus Prime is dead, any chance of keeping kids onside after the failure of the movie at the box office is effectively lost here.

It’s also worth noting how surprising it is that it took till the DVD age for Five Faces of Darkness to come to home media in the UK, or indeed, at all outside of at least one Sky showing. As the film was a VHS rental success if nothing else, brining the direct follow up along as an edited together version (as basically happened with The Rebirth and a few other tapes) and promoting it as a “Sequel” seems a no-brainer.

It seems either to be likely due to the cost of producing longer tapes counting too much against the profits (and its certainly true that when five episode Transformers releases started- including a fun combination of The Return of Optimus Prime and The Rebirth that put them the wrong way round- it was after the point only old content was being repackaged rather than new releases. Mind, Action Force had already had at least one five episode release by this point in 1988), or even that Tempo Video and its counterparts had no control over what episodes got sent over to them by Sunbow/Hasbro. Either way, its lengthy absence from British shelves means Grimlock is going to be spared a fresh batch of “But the cartoon says...” letters. 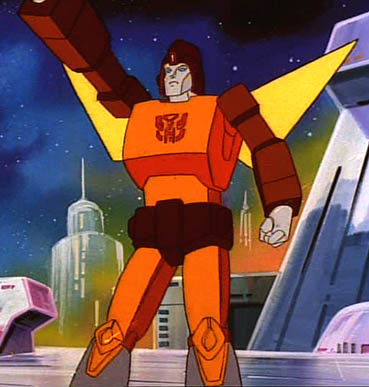 Another similarity between cartoon and comic flashbacks: If in doubt, make them look like Rodimus.
The area we are interested in however, is all in Part 4, by an interesting coincidence (it’s unlikely Furman- anymore than anyone else in the UK- had seen these episodes at the point Legacy was written) the framing device is a similar one to that used by the comic. Here Rodimus Prime doesn’t have to play second fiddle to a character in search of a spin-off, so actually gets to be the one who enters a surrealistic dreamscape and have the origin of his species explained to him via flashback and narration, in this case dead Autobot leaders. Both even have a fan pleasing cameo from Optimus Prime, though this works less well as British kids had gone over a year without seeing him whilst this is- to all intents and purposes- just four episodes after he died.

The story of their creation is basically what you’d expect- The Quintessons built them as slaves, didn’t realise they’d created sentient life and were driven off the planet before the two divisions of their product (appliances and weaponry basically) started fighting amongst themselves. It is however well told- bar terrible animation- helped by the fact the Quintessons are fantastically creepy and funny characters.

However, it does less of a complete job than Furman’s origin does. That not only explains the Transformers, but Unicron and the Matrix as well. Dille’s origin manages neither (though pleasingly it does give Megatron an origin that means the Constructicons have a third contradictory cartoon explanation). Which is actually fairly abysmal on the later count as the Creation Matrix had at least been a part of the comic since its earliest days, whilst the Matrix of Leadership comes out of nowhere in the film as far as the cartoon continuity is concerned. It’s even still bandied about from leader to leader in this flashback without a single word of explanation as to where it came from as if to rub dirt in the face of the viewer.

As a mildly interesting aside, the origin of being manufactured goods means the cartoon is pretty much the one and only continuity where it makes sense for the Transformers to be genderless beings, just constructed to appear male and female to sell to humanoid species. In Marvel and IDW (the only continuities to actually have flat out said they were genderless before the special introduction of Girl Ones) the nebulous nature of “Bits of Primus”/Sparks making their souls means you could basically do anything with it and easily say it resulted in boys and girls. It almost feels as if each series would make more sense if they swapped origins with the cartoon when it comes to gender politics.

That aside however, the sequence is strong enough and stands out enough it’s easy to see a world where it became the Transformers origin if not for that chance moment of Bob Forward  happening to use a word he didn’t understand the source of in a script he was editing.  I would say that it was lucky things rolled out the way they did though, the cartoon origin works. The comic origin is exquisite, working on a whole other storytelling level. God bless Primus. 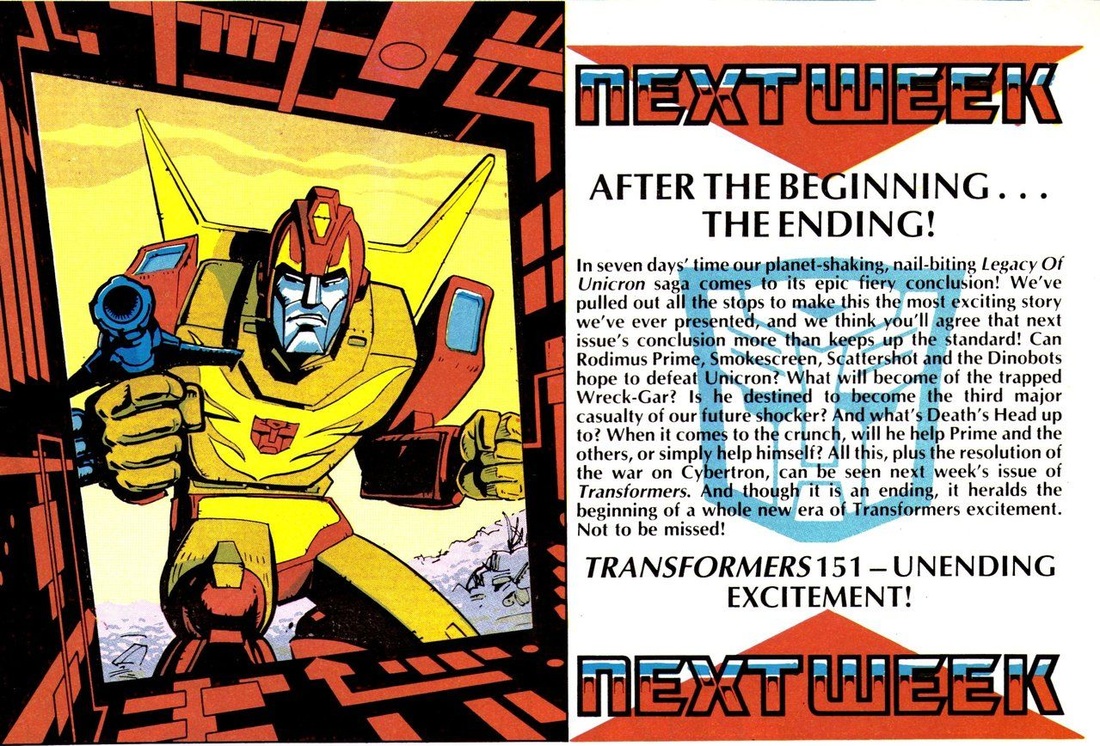