Life is Gone With Just a Spin of the Wheel. 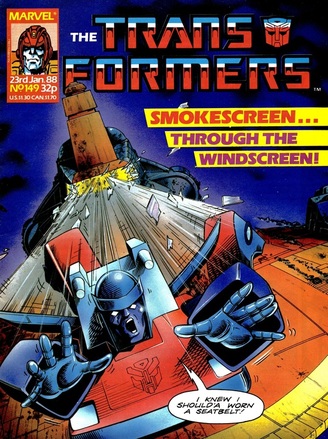 Heck -- not even enough time for my life to flash before my...eyes?

So far The Legacy of Unicron! has delighted in telling a slightly different story every week, as if Furman is celebrating the looming anniversary by showing off the full range both he and the book are capable of. This is taken to an extreme for this fourth part, with seven of the eleven pages being taken up with a plot of almost no consequence to the overall story.

As with the second part, this is a small self contained story mostly set in one room with two characters (though the scope is increased here by the massive battle from last week carrying on outside), but unlike the antagonistic relationship between Shockwave and Death's Head this is about the bonds of friendship between two Autobots.

Giving so much of the issue over to Smokescreen and Inferno is, on the surface, slightly odd. They're not lead characters in the future stories (or the present ones for that matter, this is actually Inferno's first "proper" appearance after his cameo in Ratchet's dam-busting story) and it's unlikely that there was any outside pressure to promote these two year old toys. The only real advantage of featuring what are basically older, forgotten characters is it was likely easier for Furman to kill one of them off.

Yes, this is another example of the author using the future setting to kill off Transformers without fear of Budiansky contradicting him, but whilst Shockwave's was played for the... well shock value this owes more than a little debt to the brave stiff upper-lipped chap in every British war film who heroically sacrifices himself to save the others. 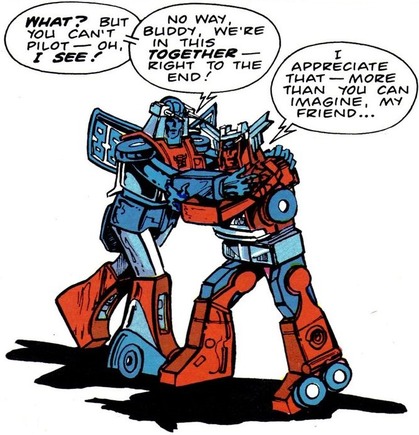 *SNIFF*
The joy of this is that in seven pages the two of them get more characterisation than the other year 2 Autobot cars not called Skids have managed in close to a 100 issues. From the opening with Smokescreen wryly musing on the irony of having made it all the way back to Cybertron only to be attacked by Cyclonus and Scourge through Inferno coming out of the medical bay to man the weapons regardless of the cost to his own health; Furman quickly and neatly conveys their commitment to both their cause and each other so well the reader is almost immediately invested in their fate. This is a fantastic achievement of economy of storytelling on the writer's part.

This means the final of this little side step all the more powerful, as Inferno decides that getting the information to Rodimus is more important than both of them making it back, so he throws Smokescreen through the windscreen (oh blimey, that pun wasn't the reason for this character being picked for raising from obscurity surely?) and steers the damaged shuttle into the Decepticon front line to take out as many of the enemy with him as possible.

What sells this isn't the noble self sacrifice, which is after all what you'd expect from any good Autobot, but Smokescreen's horrified reaction. He does everything he can to convince Inferno not to do it before their final hug is turned into a throw, and then as he watches the shuttle go down he's screaming at the heavens for his friend to jump and is left shocked and keen for revenge. It's one of the most powerful and memorable sequences in the entire series, and clearly an influence on the young James Roberts as this quick character study could have come right out of More Than Meets the Eye.

It's also, as noted, utterly irrelevant. If the issue had opened with the scene of Smokescreen delivering the report to Rodimus the overall story would not have been changed in the slightest, you could even call it padding if you wanted to be cruel. But unlike the attempts to bring the volcano story up to length a year ago it's also genuinely great drama in its own right and something that is more than worthy of being included. 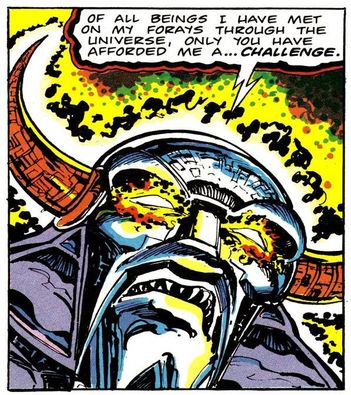 "I'd buy your comic, you're great"
It's mildly surprising that this isn't the end of the issue, but that we've four pages left. We follow this up with two perfunctory scenes. The first is on The Planet of Junk and establishes both the time portal which will become important to the final (the explanation of which about Unicron planning to grab Galvatron from the 1980's is as close as Legacy will come to tying into the ongoing plots) and that the more angry Unicron gets the weaker and more malleable Death's Head finds their mental link to be.

Unicron also comes flat out and declares Death's Head awesome. You'd almost think the character was being prepared for his own book.

The other bridging scene sees Rodimus learn of the threat from Unicron and set off for the Planet of Junk with the Dinobots. What's nice here is Magnus' assertion the Autobots can hold their own on Cybertron without Rodimus, too often the Autobots are written as being utterly dependent on the incumbent Prime. The leader's little thought of doubt after boldly declaring to everyone that The Matrix will destroy Unicron is a neat touch as well, and again very James Roberts.

The last page however, refocuses the story on its actual lead character as we get our second cliff-hanger (third if you count the fact he was present at the end of the first part even if it wasn’t about him) to be all about Death’s Head, as he makes Unicron angry by killing some Junkions, before using the anguish the Chaos Bringer throws at him to jump down their mental connection and enter Unicron’s mind.

No, I’m not sure it makes any sense, but it does set the scene for the big event next week.

The bulk of the issue focusing on the two Autobots is brilliant, and though the last third is more about getting pieces into place it’s still another instalment of this story packed with some of the most iconic moments of the whole series. I’m actually starting to wonder if they’ll be any left for the remaining 153 issues. It’s also helped by some of Dan Reed’s best art to date. 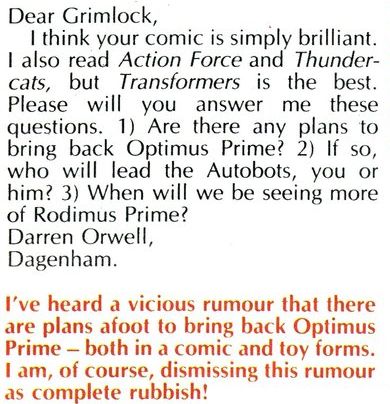 Foreshadowing!
This issue is effectively the calm before the storm of the big celebrations, so all the main things of interest in the rest of the issue are to be found on Grimgrams. Darren Orwell from Dagenham asks if Optimus Prime will be coming back, resulting in Grimlock revealing he’s heard the most famous Autobot will be returning in “both in a comic and toy forms” (odd phrasing there) but dismisses this rumour as complete rubbish.

Meanwhile Jonathan Harvey from Penzance asks about the Aerialbots and the Mechanic (who was apparently one of the main reasons for Master Harvey buying the comic. Hmmm), Grimlock reveals that both will be back this year.  Assuming Furman hadn’t been planning to do something with the Mechanic himself (perhaps he’d gone insane), the confidence with which this is said suggests he’d seen some sort of plan/outline for what Uncle Bob was planning to do in 1988, however vague, and this lose end was originally going to be one of the things covered, before someone realised it would in fact be a crap thing to do.

The letter’s page then ends on a family affair as Jonathan’s sister Samantha Harvey has also written in to complain about her brother not letting her read the comic, meaning that Grimlock has to firmly state the comic is for girls as well once again.

Next week, I’m on holiday (I’m going to London to celebrate the tenth anniversary of Rose by standing in front of the London Eye and hoping Billie Piper comes up for a snog), so the big ball breakingly important 150th issue will be covered on Tuesday. But to make up with this, once I return on the following Saturday they’ll be a celebratory Addendum on the other now forgotten origin of the Transformers. So join me on the 24th for a total mind trip.

As a final, sad bit of news, this August’s Auto Assembly has been announced as they last (for the foreseeable future as least, the end of the press announcement does at least imply some sort of continuation is on the cards for a few years time, likely under new management), so if you’ve not been before and can make it to Birmingham for that weekend why not pop over to give me a hug? It’s also given me an added incentive to get volume 1 of the book project of this site ready by then (it’s also dictated a three volume series coving the comic in thirds as I don’t think I’ll have reached the halfway point to have it done in time even if such a book wasn’t too chunky). There will likely be at least a couple of extra Addendums thrown in as I missed some obvious ones due to not starting them for a year (the cartoon being the biggy, The New Eagle’s Robo Machines comic should be in there as well as long as I can find my copy in time), so if there’s anything you’re desperate to see covered, let me know. 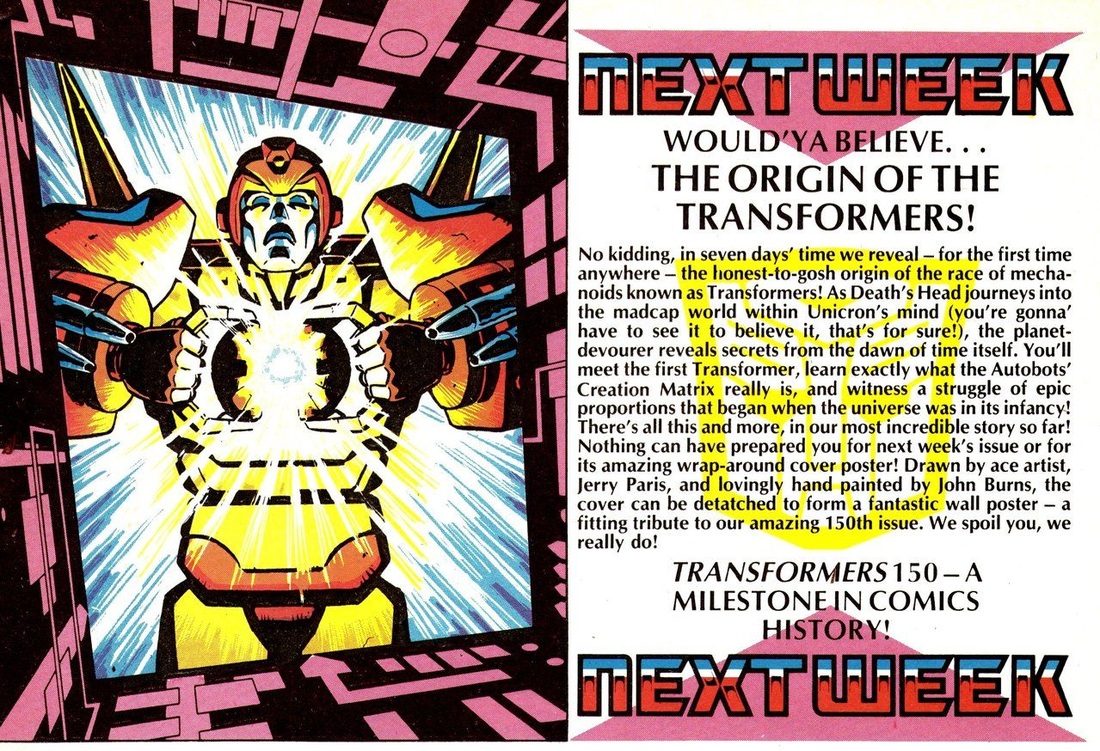