If We Can't Have It All, Then Nobody Will. 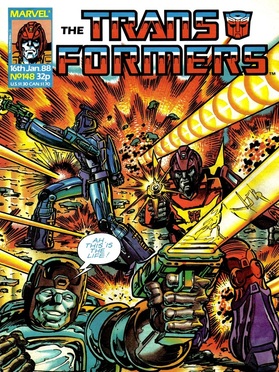 The plan was to kickoff by thanking you all for the kind words about the Roberts and Lloyd interview and follow up on the main bit of feedback (people's surprise that the books were still a going concern) by once again reassuring folks the run of Classics UK is still on course to finish with book 8.

But I'm writing this about an hour after learning about the death of one of my personal heroes, Sir Terry Pratchett, and the world feels a darker, less witty place without him. So, even though it's got no connection to him whatsoever after this introduction, I dedicate this piece to his memory. I can only assume at this point God is going after all my favourite celebrities. Peter Kay is probably going to turn out to be immortal.

More cheerfully, back in 1988 it's time for brutal mass slaughter. This is effectively an issue with two threads, the first of which is the single biggest battle the original comic will ever see. Later in the year a mini-tradition will start where the ever growing cast will be used to create crowded battles of forty or fifty characters, and On the Edge of Extinction! will in theory involve the entire species, but the double page spread here (the only one the British stories ever did) has more characters on it than are seen any other full issue. Most of them are so small due to the scale as to be shapeless blobs, but we're still talking hundreds, and that's just two pages.

It's exactly the sort of thing every reader would have wanted, something Furman nicely lampshades by having Kup be really pleased at the boredom of the stalemate that has consumed Cybertron being replaced by a massive action scene. 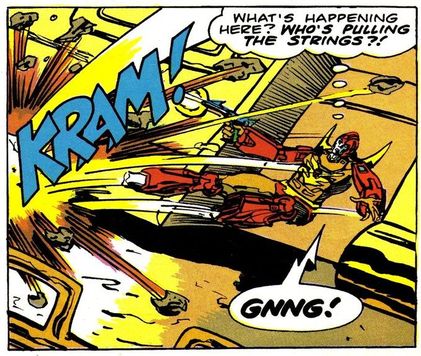 Rodimus on the back foot.
A big fight like this is of course, entirely dependent on the art. Coming off the back of two weeks of Geoff Senior was always going to be a challenge, and Dan Reed does struggle with scale in places, something really notable on the double-page. Indeed, despite being edited by Simon Furman it's telling as to how clear the visual storytelling is that the Titan reprint didn't realise this was a spread and printed each page on different sides.

However, what is clear is just how much fun Reed is having here, I don't think any of the other regular artists would have bothered to ram so many characters onto each page, both recognisable (how fun is Grapple shooting two Decepticons at once?) and newly created. There's huge energy in everything here, and the rougher edges of his work actually add to the feeling this is a nasty, dirty fight.

As fun as this is though, the real meat of the issue is back on the Planet of Junk. Unicron's plan to have the Transformers destroy themselves is actually quite ingenious, even if having the Junkions rebuild him from the neck down rather than the feet up (and then plonking the head on top) just feels like making the job harder. Indeed, there's a later Combat Colin strip about the rebuilding of the Combat Shed that feels like a send up of this.

Serious Wreck-Gar.
What’s really delightful about this half of the plot though is the chance for a more serious take on Wreck-Gar. He is, to all intents and purposes, a comedy character with exactly one joke. The enslavement of his entire species gives a chance for him to drop the facade, and Furman really turns the screws on him by forcing him to kill one of his own people who tries to stop his team as they sneak back to the shuttle. It’s a powerful scene, and sets up his decision to stay behind and keep Death’s Head busy so Smokescreen and Inferno can go and warn Cybertron.

Ah yes, Death’s Head. There’s no actual reason for Unicron to keep him alive at this point, indeed it’s hard to see what one mechanoid can do for security that an entire planetary population can’t equal. But he’s our lead- tellingly he’s more proactive here than Rodimus Prime is on Cybertron when he just reacts to what happens- and he’s fighting every step of the way. This results in the least likely one on one fight of the entire series as he takes on Wreck-Gar, and both are deadly serious with even their quips having a barbed edge to them.

In the end, Death’s Head is able to fight off Unicron just long enough to let the Jumkion escape (there’s no explanation for why Unicron doesn’t just mind control the intruders, does he need line of sight in his weakened state?), and ensuing the other Autobots have gotten off-world, even if Inferno is injured. This will be important next week.

This results in a slightly odd cliff-hanger as Death’s Head is mentally punished by Unicron, whilst still being very pleased with himself for having held off long enough to help Wreck-Gar. Despite that though, this is another strong issue that greatly increases the scope of the story (and indeed, the series) and which gives lots of great material to an otherwise one note character. Indeed, Wreck-Gar comes closest of any of the Transformers to equalling Death’s Head for lead status.

Grimlock's altered AtoZ.
Transformation this week offers us a competition for two “Find Your Own Adventure” style books staring Spider-Man and Captain America. Considering the current absence of both from British newsstands the questions were probably quite tricky for kids of the time, I mean, what are odds of many readers having even heard of Cap, let alone knowing what he uses as a weapon.

On Grimgrams Michael Wheeler from London asks a question that’s been a surprisingly long time coming about the Movie comic adaptation calling Autobot City “Fortress Maximus”. Grimlock explains that the “Transformed” City (a careful phrasing that suggests a word inserted at the last second when someone remembered the City was already called Metroplex) was named in honour of the Autobot.

Still on Grimlock, AtoZ covers him and Groove. The Dinobot’s entry is notable for being the first that has been overtly changed from the original Universe profile beyond just cutting it down a bit as Grimlock’s replacement of Optimus Prime is acknowledged in both his function and personality description.

Iron Man turns out to be having lunch with Babs, who tells him about her fears for her friend. This gets her killed by Roxxon, and for some reason they’re surprised when this course of action pisses off Sandy and turns her against her employers. Roxxon don’t want to go all out with the “Zed Control” yet, so they’re going to turn the competition against her...

Despite the forced nature of Roxxon slipping up so obviously over Babs, this is still quite an intriguing second part that has some nice fun action as Statosfire destroys the rival oil refinery at the start.

Next week, more war but also a return to character based small scenes in yet another of the best death’s the comic ever did. 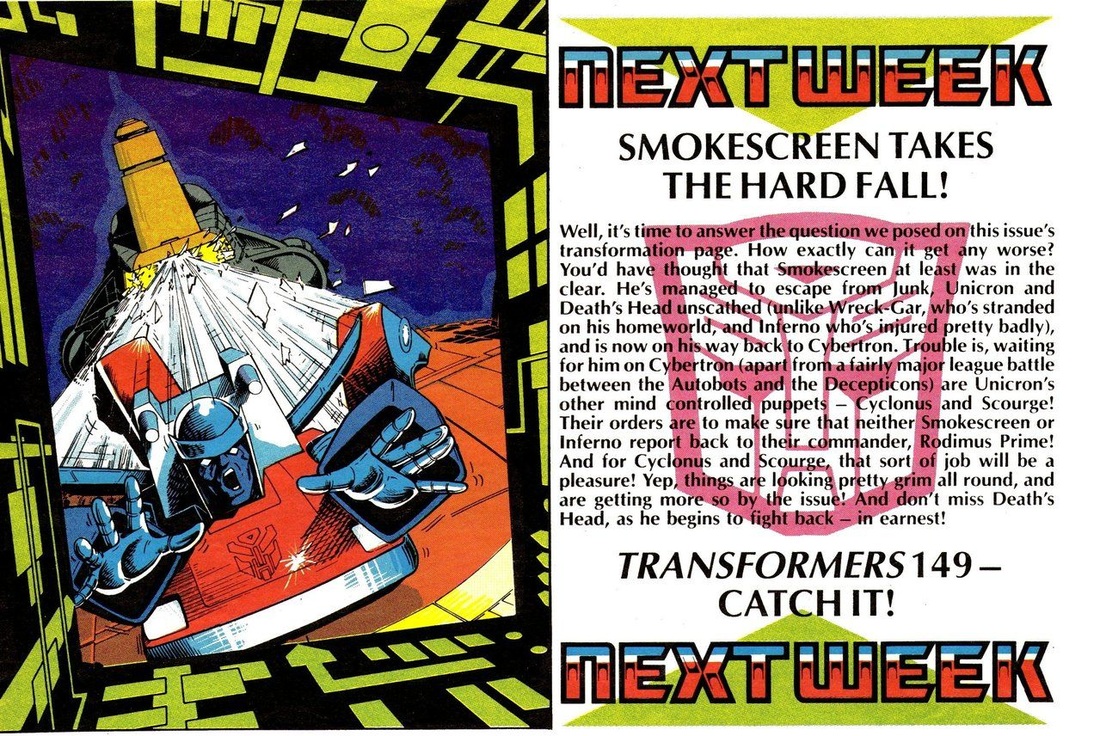 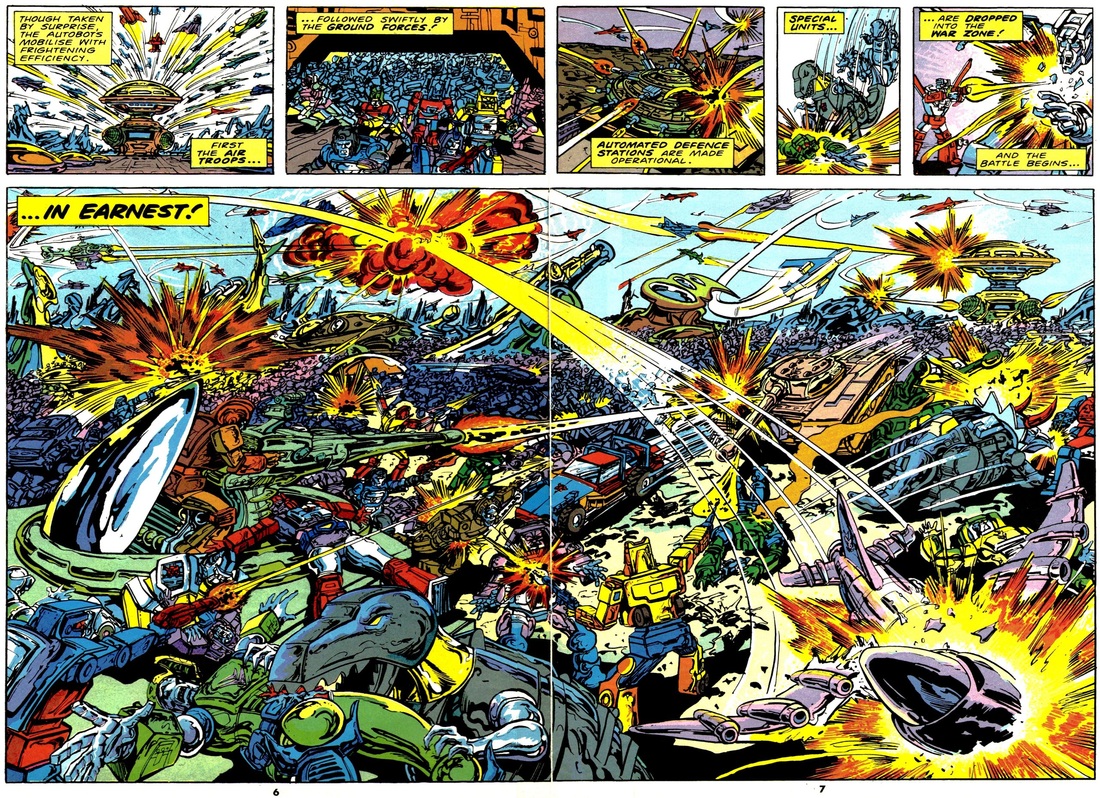