If You Want a Happy Christmas, Sing Along With Me.


It's a sure sign of how bad things are when I can't even stir up the enthusiasm to squash a fleshling! 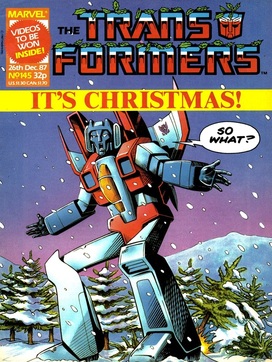 With tinsel on my head and Slade in my ears (not literally, that would be disgusting), it's time for what, as Transformation points out, is now a tradition, the standalone Christmas story designed not to tax young minds that might be a bit too excited by the season to focus on a comic.

To a certain extent this is the end of a mini-era, the Christmas stories will continue for another two years (three if you count text), but this is the last in the "Classic" format established by Christmas Breaker! The plot may be credited to Simon Furman, but it’s clear that the post it note he gave to former editor Ian Rimmer simply said “Look at the last two James Hill efforts and take it to its logical extreme”, so instead of a human teaching an Autobot the true meaning of Christmas it’s the turn of a Decepticon.

Effectively this explains why Furman would have to come up with a new plot for next year's effort as there's basically nowhere else to take the idea after this, as whilst the plot beats follow exactly the same pattern as Christmas Breaker!, Starscream provides a wry, mocking commentary in his adventures with a human on Christmas Eve that effectively sends the entire thing up. 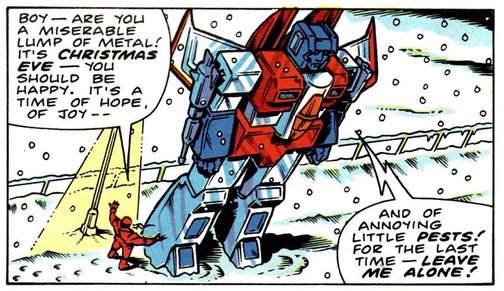 "And why do they all have teddy bears?"
Indeed, it's not just the previous Christmas stories that get a lampooning; a young human meets a Transformer and decides hanging around with them would be terribly exciting. He may not have a teddy bear, but this unnamed teen is very much from the same cloth as the Spacehikers, and Starscream can't stand the little squirt, with the only reason the Decepticon doesn't crush him being that he's generally depressed with the state of his life and can't bring up the enthusiasm for a bit of the old ultra violence.

The cynical attitude of Starscream makes this the most fun of the specials so far, and helps distract from the fairly straightforward nature of the plot, the only really notable aspect of which is that the old people's bus he rescues (mainly to make the passing Streetwise look a tool) is heading for Sunnydale, meaning the pensioners presumably were eaten by a vampire or sucked into a Hell Mouth before Boxing Day anyway.

Even the on the surface smaltzy ending of Starscream finally wishing "Merry Christmas" to the kid has a dark edge to it, as this is actually a sign he's recovered from his sulk at the start of the story and is now ready to go back to killing and mayhem.

Streetwise's finest moment.
For years though, the main bone of contention over this story had nothing to do with its plot as such, but its continuity. In the days before mass reprints (and I should say I’d gotten this far before deciding to check the background details in the fourth Classics UK book and realised I’d made a massive comical factual error that required a massive rewrite. And I will never reveal what it was) scans on the internet tended to be cobbled together from the UK and US issues. Meaning that for many people it was confusing as to how Starscream escaped from his stasis pod here only to wind up back in it within the Ark in Totalled! This resulted in the story being treated as an out of continuity oddity, but we now know the later American story was actually altered so as to not make this an issue.

The other big question is: How did Starscream’s pod end up in the middle of a field? Did Hot Rod and company really leave it there after the end of Target: 2006? This actually makes more sense than it might seem, the future Autobots were acting under the mental control of Unicron and the end of that same story showed he liked to play games with the timeline when he set up the creation of Autobot City Earth. Presumably he deliberately set things up so Starscream would be left outside and woken up now; creating the chain of events that will lead to the Underbase Saga and kill an awful lot of the Transformers he hates so much.

And that explanation is my little Christmas gift to you. Only 27 years and two months late.

This is a fun little story and has some nice art from Jeff Anderson that really captures how cheesed off Starscream is. It’s throwaway stuff, but good throwaway stuff. 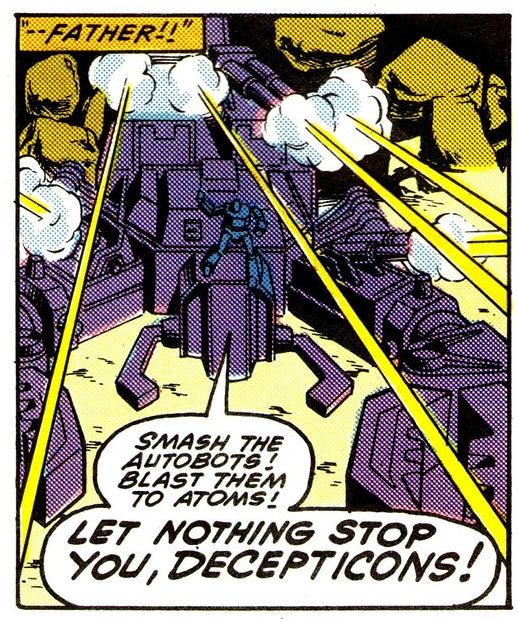 "Wait, I'm getting the hint dad might be a baddy".
The conclusion to Headmasters suffers from an extremely rushed wrap-up. Galen and the others successfully escape and return to the rest of the Autobots, with Zarak finally fully giving into Scorponok and thus giving his daughter a good clue as to who the real baddy is.

At the Autobot base Galen decides to leave Nebulos, having worked out that Zarak let him go specifically to do this so the Decepticons would follow. This means their war will come to Earth, thanks Galen you prick.

We do get one nice character beat (one so nice Budiansky  will repeat it with Hi-Q later in 1988) where Llyria comes to apologise to Galen, but he deliberately rejects her love as he knows he could never leave if he thought there was still a chance of getting into that lopsided crop top.

Of course, asking her to come with them was never going to be an option because she’s a girl and girls have fleas as we all know.

The speed at which the story then concludes then shows that perhaps there wasn’t quite enough room in four issues to introduce the Targetmasters alongside all the other stuff that the series had to do, with the departure of the two groups of Transformers and the rebuilding of Nebulos all being covered in a page of third person narration.

Ineffectual ending aside, Headmasters has overall been a pretty solid series that has never been less than OK and has often been considerably better than the lead strip. It’s only real issues are its legacy, all this work on Zarak and Galen will wind up being moot as the former will never again show any sign of a non-insane personality under Budiansky and the later will be killed off with undue haste when they meet up with the regular book.

Still, for a series that had to basically ram an entire year’s worth of toys in it does a far better job than it had right to. 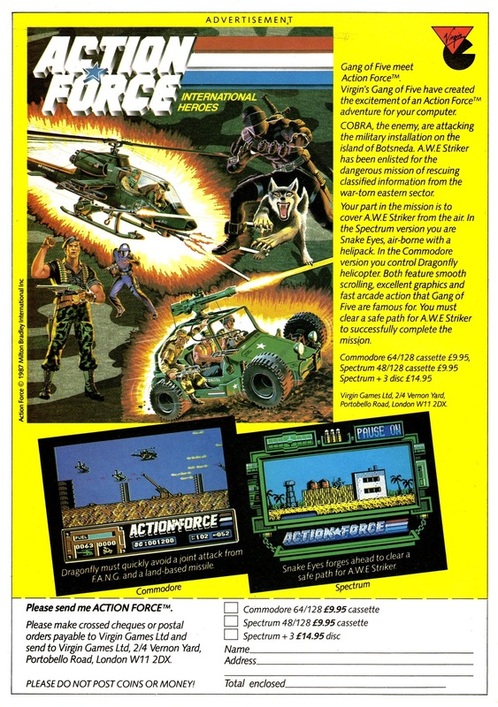 Who wants this for Christmas?
As is now traditional, the regular pages of the comic are covered with tinsel, decorations and- in the case of Grimlock on the letters page- a Santa hat and beard. To really get into the seasonal spirit there’s also a competition for that most ubiquitous of Transformers videos, Heavy Metal Wars and The Girl Who Loved Powerglide. I hope you like those episodes; you’ll be getting them a lot.

The recent obsession with doing new things to the Dinobots continues on Grimgrams as Mark Roberts from Port Talbot suggests Grimlock should build lots more of them. Though at least he doesn’t suggest they combine. He also asks how the Creation Matrix was made, letting Grimlock drop the bomb that issue 150 will explain this. He’s then is able to drop another bomb about that issue when Sean Leander from London asks where Unicron comes from. This ironically means the big surprise of next week has now been completely ruined for anyone paying attention.

You can also tell Christmas is coming a Grimlock is first forced to admit that you can’t buy the Predacons over here, before having to put up with a smug letter from Martin Chimielowski of Southport gloating about all the unavailable in the UK toys he was able to buy on holiday in America. Including the six changer... Six Gun. Grimlock reports a rumour a six changer will make it over here in 1988, but understandably can’t be sure if it’ll be this Six Gun guy.

So that ends 1987 (well, technically the next issue will spend most of its time on sale this year, but shhhhh it’s more aesthetically pleasing to end here), which as I said back when all this started was the single most prolific year of Marvel. Sadly it’s been a more uneven year than the previous two, with a long period of mediocrity in both the British and American stories via the volcano and Spacehikers stories. However, there were still some extreme highs, mostly involving Death’s Head, and the New Year will kick off with the biggest and most important story since the first.

But before that, it’s the Annual and Collected Comics! Coming to you (all being well) on Saturday. 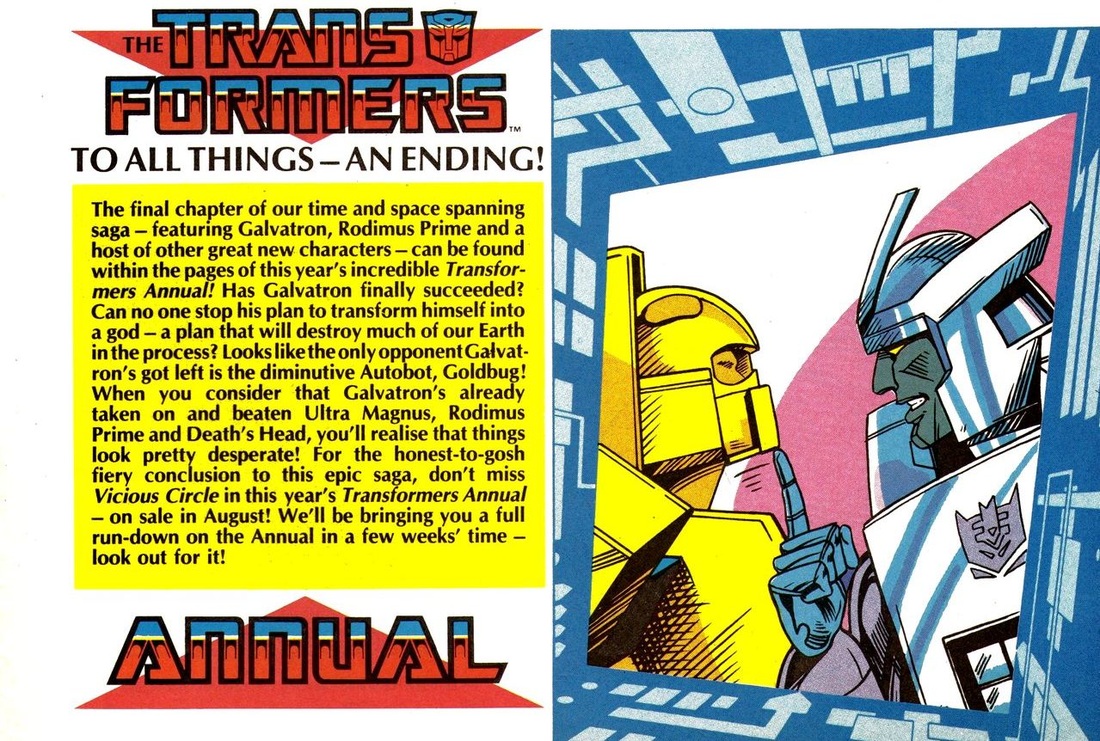