I Always Wanted you to go into Space Man.

*In the reverse of the situation from two weeks ago, the second half of the story loses the exclamation mark the first had. 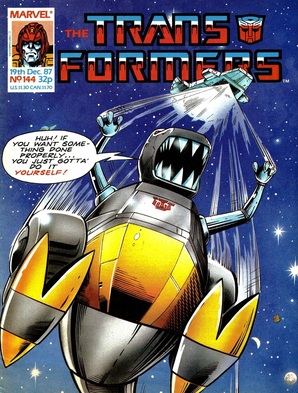 For fans of this story who may feel I was too harsh on it last week, I'd heartily recommend reading the comments on issue 143 as long term reader Ralph Burns makes a spirited defence of why he really enjoyed it as a child, which makes an excellent counterpoint to my old man moaning.

Luckily- as I've no desire to be constantly negative- the second half of the story sees things get more serious and thoughtful, bar one particular irritant which I suspect most of you will be able to guess well in advance.

The issue is basically a tactical game of cat and mouse (and space monster thing) between Grimlock, Blaster and Sky Lynx, that thankfully returns some much needed brains to the Dinobot leader, making him an effective villain in this arc for the first time.

So Grimlock deliberately announces he's going to execute the humans, knowing members of his own troops are sympathetic to Blaster and this will bring him out of hiding (Grimlock's claim he won't really harm the kids feels like a last second addition from either Marvel or Hasbro as his faking of the threat to the feels awfully convincing throughout). As a result, Wheeljack has Sky Lynx rescue the children from walking the space plank, leading to a hunt through a meteor shower.

Luckily for Sky Lynx, he has the rule of new toy superiority on his side, and actually makes short work of the Dinobots as they try to do The Most Dangerous Game, on his ass, in what is a genuinely fun and novel action sequence that again shows Budiansky is really enjoying his latest creation. 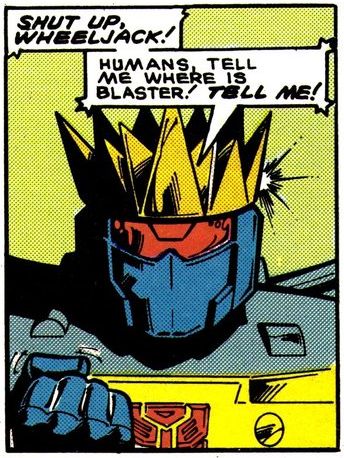 "Shut up Wesley!"
Meanwhile, Blaster has snuck aboard the Ark in another well executed scene that nearly sees him burnt up by one of the ship's engines, though sadly the art doesn't really sell the idea he's come close to being burnt to a crisp. Inside the ship his fellow Autobots continue to be craven cowards, begging this half fried solo outcast to take care of Grimlock, rather than simply ganging up on him themselves. Obviously they're unaware of what a psychotic git Blaster can be as well as they plead for him to take charge. Either that or they're all secretly 50 Shades of Grey fans who enjoy being dominated.

This means, after all the ways his character has degenerated since he arrived on Earth, Blaster gets to have some of his own dignity restored by being the sole voice of reason on the Ark as he points out their first and only priority should be the innocent humans that have been sucked into their petty infighting.

Mind, this involves everyone being too polite to mention the kids are only in danger because of choices he has made, but at least it's a step in the right direction.

Grimlock has an ace up his sleeve though, he may not be able to beat Sky Lynx in a fight, but he can coral him and simply wait for the humans to run out of air, which forces Blaster's hand and creates a cliff-hanger we won't see resolved for quite some time as the rogue Autobot is forced to surrender. 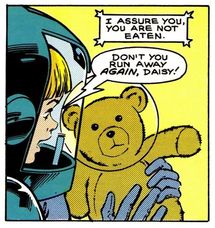 Look at the despair in Daisy's eyes...
If this was the entire issue, it would be one of the strongest American stories of the year, and a pretty solid way for Uncle Bob to close out 1987. Unfortunately it's let down by those bloody kids, who continue to treat their life and death struggle as an awfully big adventure whilst acting as if that blooming teddy bear matters. Luckily their page time is kept to a minimum this week, but it remains a hugely painful read every time they show up.

On art we get some more Random Characters Who Shouldn't Be There in Sandstorm and Twin Twist- it'll be a relief when the Steelhaven and its less well defined crew joins up with the main comic and we'll have an excuse for where these guys come from- though we'll put down an apperance by Swerve to Yomtov getting confused by Gears. There's also another literal example of characters just floating over the art as a group of Autobots just stand around in the vacuum of space as the kids are ejected from the Ark. Still, this has been a fairly solid first story from Delbo, and he even gets some nice manic poses out of Grimlock. 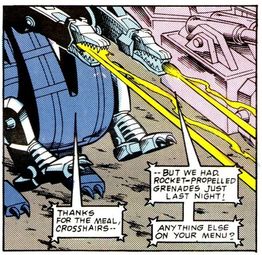 Targetmasters: Rubbish.
The penultimate chapter of Brothers in Armour! more than gives the hint that Uncle Bob really doesn't like the Targetmaster gimmick as, despite some nice work from Springer on art to have the guns all fire different types of energy, they're shown to be more than a bit rubbish. Dialogue in the nursery battle constantly shows up how much better the Decepticons are ("You're fast Blurr, but Cutthroat is faster!") and in the end the Autobots are forced to retreat because their new gimmick isn't good enough to beat the 'cons without destroying what they're trying to protect.

Then, to add insult to injury, when the Decepticon Targetmasters are introduced by Vorath, Zarak doesn't give a toss and walks off before the Nebulons can even be named. Though at least Cyclonus looks like Cyclonus now, indeed this may be the first instalment where Frank Springer manages to not make any really obvious character model mistakes (there's a challenge for you gentle readers, can you spot one?).

The heart of the story though is the climax of Zarak's inner turmoil. The destruction of the nursery makes him realise he truly is becoming submerged into Scorponok, so as a last desperate act to save his planet he knocks out Krunk and frees Galen and the other captured Headmasters. It's an extremely well done character moment that not only makes for an effective cliff-hanger but arguably makes Zarak the true hero of the series.

Oh, and for those following her fashions, Llyria has now changed into a delightful low cut white top that exposes her midriff. Oddly all her clothes have been in purple and white, it's hard to tell if this is supposed to be thematic or if Yomtov just has very little imagination. 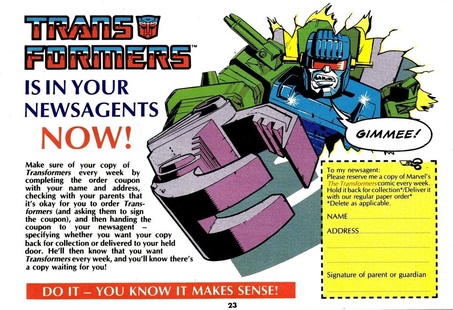 A man after midnight?
Transformation makes a slight effort to make the lead story sound exciting, but comes over as relieved when it talks about how we won't be picking up on this for a while. Instead half the page is given over to promoting the upcoming British stories, whilst the sidebar makes one last ditch attempt to get kids to ask for a Marvel Annual for Christmas.

In Grimgrams we get yet another letter-this time from Grant Hughes of Ramsgate-going on about how brilliant a Dinobot combiner would be. There must be something in the water. We also get a neat theory from Eoin McDonnell of Dublin about how Cyclonus and Scourge could be hanging around 20 years before they were created. Unicron just based them on two Decepticons who had died by 2006; a theory spun from the fact there's a Scourge looking statue in the Decepticon hall of heroes in the film. It is, as Grimlock says, a good theory that pays excellent attention to detail. But the real truth will be revealed in seven weeks.

Robo-Capers has a joke about a filofax that is probably the most 80's thing in the issue, and we also get the first "Reserve your copy" coupon to use the Scorponok going "Gimme" art. What's especially noteworthy though, as pointed out by James Roberts in the fourth Classics UK book, is how the Next Week box spends longer explaining how the Christmas story follows on from Target: 2006 for Starscream than it does talking about the end of Headmasters, which is literally an afterthought.

That's for next week though, where I will also be wrapping up another year with the Annual and Collected Comics. 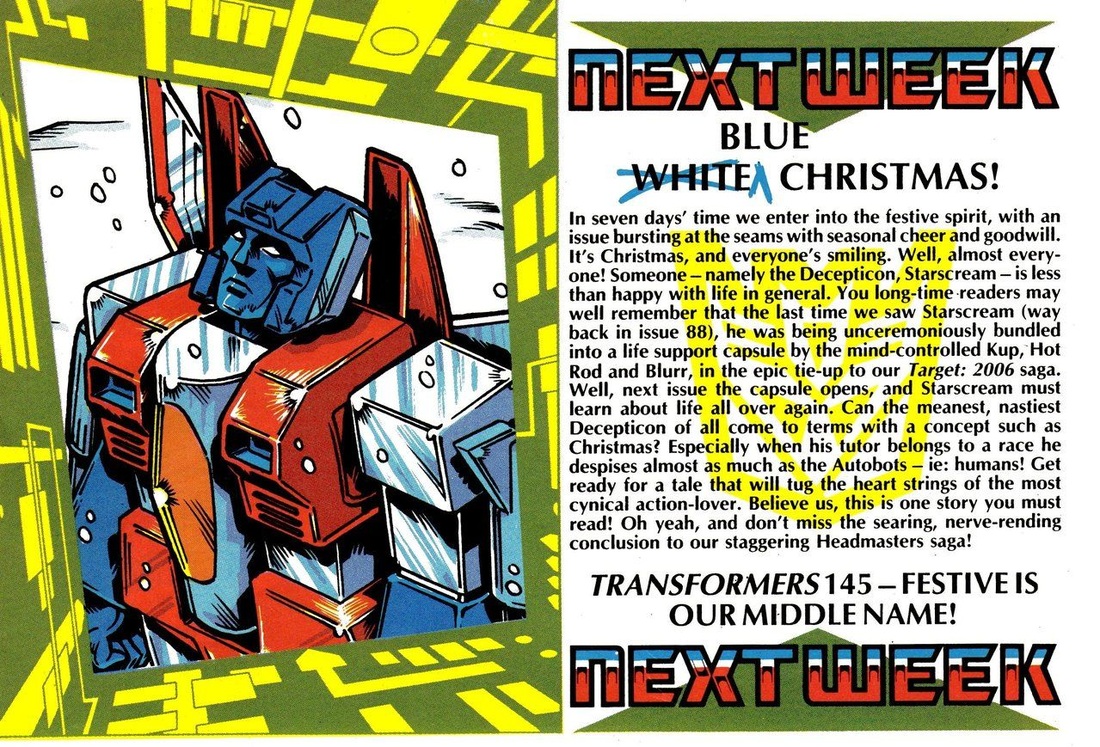