I beg your forgiveness little one. 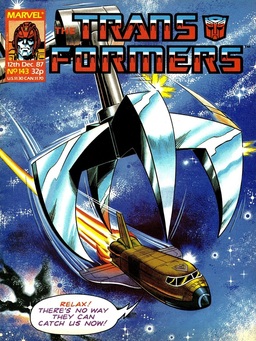 By this stage we’re more than used to seeing Simon Furman get playful with his narrative structure in the British stories, both as a way of testing his skills as a writer and for the more prosaic reason of making 11 page stories work better. It’s not often however we see Bob Budiansky experiment with form; usually his stories are straightforward and linear in nature.

This week however, the issue opens with scenes set before last week’s cliff-hanger. On the surface this seems to be a good idea as it means we open with Sky Lynx rather than picking up on the kids. Coming in amidst what feels like a drought of inspiration on Uncle Bob’s part the bizarre space shuttle monster thing is like a bucket of water over the head. From his first line of “Blazing bolts!” this ever cheerful egomaniac is the most fun the writer has had with a character in a good long time.

He’s been called to Earth by a desperate Wheeljack who hopes a character with an actual backbone might be able to do what the other Autobots can’t and sort out the increasingly insane Grimlock. What really stands out though is there’s no real narrative need to start with jumping back in time (something editorial is obviously worried about confusing kids with anyway as we get two boxes pointing out when it starts and ends), it would work just as well if he was coming out of SPACE drive into Earth’s solar system just as the last issue was ending. 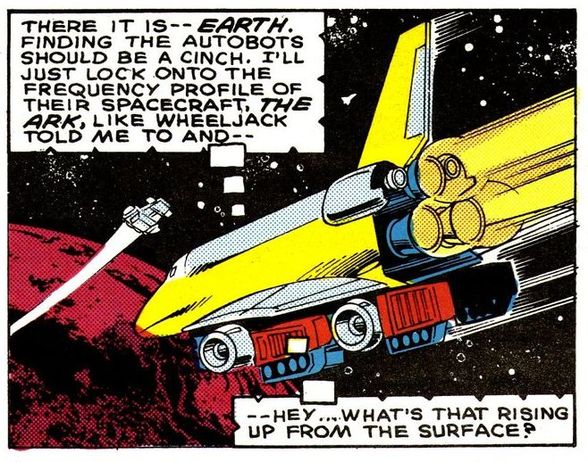 Best character in the whole issue.
The terrible truth soon dawns once you realise that the out of sequence storytelling isn’t for the benefit of the Sky Lynx sequence but for what follows. Padding! It’s clear that this issue was ultimately under-running as first up we get a sequence of Grimlock being a dick (though he goes slightly further than before by actually throttling Wheeljack. Not that Wheeljack does anything other but sit there and take it) and ordering the Ark to chase Blaster. A sequence made redundant by the end of last week, and handy recap dialogue for new readers could have just as easily been fitted in later in the issue.

Things get worse as we get another interminable scene of the kids pissing about in Blast-Off that is made even more painful by being completely needless. The one and only bit of plot movement is one of The Boy Ones nearly kills everyone by opening an airlock, giving him the handy information he needs a few pages later to try and save Blaster by throwing him out of the same airlock (without actually killing anyone, annoyingly). This is still pointless as the kids would have had to enter the ship through an airlock, meaning the explatority dialogue could have been handled laer as well. Plus, Blaster’s dire warning of the consequences of opening the airlock winds up being without actual consequence making it a two for two on the irrelevance scale.

This is all, rather obviously, a sign of an author who has realised after writing his issue that he can’t make it fill 22 pages, so he’s just gone and stuck some extra ones on at the start in desperation. If not for the joy of Sky Lynx this would be an incredibly weak opening. Six of the eleven pages of this half of the story are given over the “Before the end of last issue” shenanigans, and of those only the two pages introducing the new character couldn’t be easily snipped with some tighter writing.

There’s one good idea in what follows, where Grimlock uses the fact Blaster is riding a Decepticon as (perfectly reasonable) proof that he really is a traitor, which even makes Wheeljack doubt the Autobot he has come to pin all his worthless hopes upon.

Though with just a helmet the vacuum of space will still kill him...
This goes nowhere though as the shuttle is quickly captured (after Blaster has been thrown out by The Same Boy One) and humans being discovered aboard quickly removes any doubts from Wheeljack’s mind. We then get the most insanely painful moment in any Transformers fiction thus far as Wheeljack kits out the kids with spacesuits... and gives Daisy the Teddy Bear one as well.

I am now firmly on Grimlock’s side.

This is, amazingly, the cliff-hanger to the issue. Even allowing for the fact it wasn’t intended to be such, that’s still not the comic’s finest moment.

This issue is also notable for the Dawn of the Delbo. Jose will be the main artist for the remainder of Uncle Bob’s time of the series and the first chunk of Furman’s time in America. Having met him last year and found him to be an incredibly lovable Santa Clause of an old man (him needing Nick Roche to help him remember the name of any Transformer when asked which was his favourite was actually endearingly sweet) I actually feel quite bad about the prospect of saying negative things about him.

Luckily, this debut actually isn’t too bad, as he’s very much following on in Perlin’s style Delbo doesn’t get much chance to let his worst tendencies loose as of yet. There’s not even the standard Delbo “Transformer walks forward with their chest toppling back as if it’s about to fall off their waist and their arm waving in the air” pose in evidence. Obvious use of character models is also pleasingly absent as well.

However, it does feel in places as if characters are floating in front of backgrounds rather than standing on them (notably all three Dinobots in the panel where Grimlock asks “Where is traitor Blaster?!”) and we get what may be his most infamous trait of random character use. Delbo will wind up being second only to Springer’s art on Headmasters when it comes to just sticking anybody anywhere at any time. He might have just lucked out and anyone coming onto the book at this point would have been undone by the sheer volume of characters knocking about and certainly editorial is as much to blame, but he’s still far worse for it than any of the other regular Marvel artists.

This trend starts here with Wildrider being shown in a flashback on Cybertron despite having been built on Earth far too recently for Sky Lynx to have met him on any trips there. On the other hand though, Delbo can be let off for Skids appearing as his absence is something the artist wouldn’t have been aware of, and this may be the only appearance of the lost Autobot in an American story the UK team didn’t successfully work around (though as we don’t see his face here a later edit to Skids art in Totalled! to create a new character could retroactive make this that guy).

Mind, as it’s not an error just a slightly random choice, seeing Cosmos hanging around with the Dinobots as if he’s one of the boys is funnier than any of the intentional jokes in the comic by far. 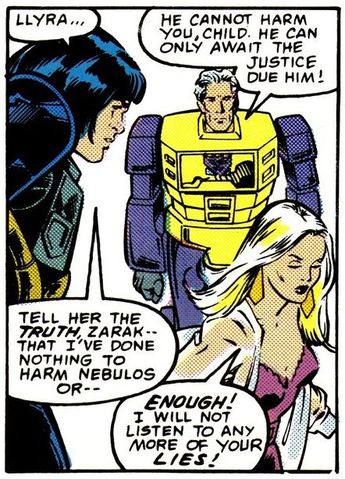 "But... you came to see me!"
The second part of Brothers in Armour! is mainly about moving the pieces into place for the Headmasters leaving Nebulos. Those who have read the Titan trade Trial by Fire collecting this series will have read Budiansky’s original pitch for it, which suggests two alternate ending depending on sales. One would see the comic become an ongoing about the adventures of the Head and Targetmasters on Nebulos (it’s likely this is what Furman may have been hoping for when he wrote Worlds Apart!), and one ending with them leaving the planet and going to join up with the regular Transformers in the main book. This is the first time it becomes really obvious which way this is going to go.

So, we have the Decepticons also finding out about the message from Earth, and Galen giving a speech to Zarak about how he’s being used that will ultimately motivate him to leave the planet.

We also get a hilarious scene of Llyria demanding to see Galen (hung up in a web that makes him look like Adric strung up by Hadron energy in Doctor Who: Castrovalva), only to walk off in a huff the moment he’s woken up and tries to talk to her. Women, hey?

The issue ends with the Decepticons attacking the soon-to-be Targetmasters at the planet’s main nursery (for plants, not kids), and it has to be said the owner calling them in to protect the place from Decepticon attack should really have expected that to expedite one rather than help prevent it. The cliff-hanger here is of the new Nebulons jumping at their Autobot partners, which would be more effective if the reader hadn’t been primed by months of adverts as to what to expect next.

Still, to be the best cliff-hanger of the week it doesn’t take much. 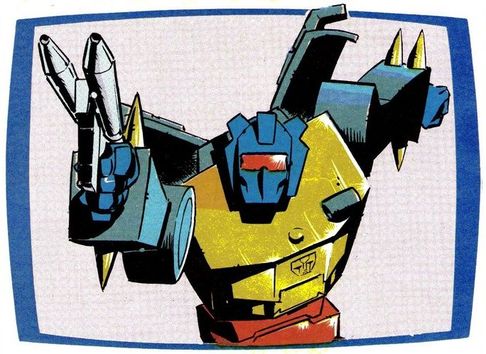 Reused Grimlock art on Transformation.
Transformation once again clearly didn’t have any art from the actual issue by the time it was put to bed as a fetching and re-coloured drawing of Grimlock from the cover of Collected Comics #6 is used instead. This Geoff Senior piece is comfortably the best bit of art in the whole issue. Accompanying it is a Dan Reed drawing of Unicron’s head (sorry Reed fans, I don’t care enough to track down which issue this is reused from) in the sidebar telling you which lucky kids won a VHS copy of Transformers: The Movie.

On Grimgrams, in-between poo-poohing the idea of a Dinobot combiner (again) and saying an advert for Transformers appearing in-fiction in Action Force doesn’t mean the two can’t do a crossover as the Transformers are real and exist in the same world as their comic (!), we get what is basically promotion for the Annual. This includes Paul Woodford from Leicester singing the praises of the Volcano story whilst being very careful not to reveal how it ends.  More notably Stylor from Nebulos writes in to complain about his good friend Gort being called “Grot” in the text story. What’s amazing is he completely failed to spot Galen being spelt “Kord” throughout.

AtoZ covers First Aid and Frenzy, with the former being especially notable because we’ve been so conditioned to accept his cartoon portrayal as “Standard” First Aid it’s odd that there isn’t a single mention of him being a pacifist. Meanwhile King Nonose tries to train the robots of him new planet to be fighting machines, and fails utterly. He’s still a more convincing military commander than Grimlock though.

Next week... well the Next Week box’s “If you thought our lead strip couldn’t get any more exciting...” seems to be taking the piss a bit doesn’t it? 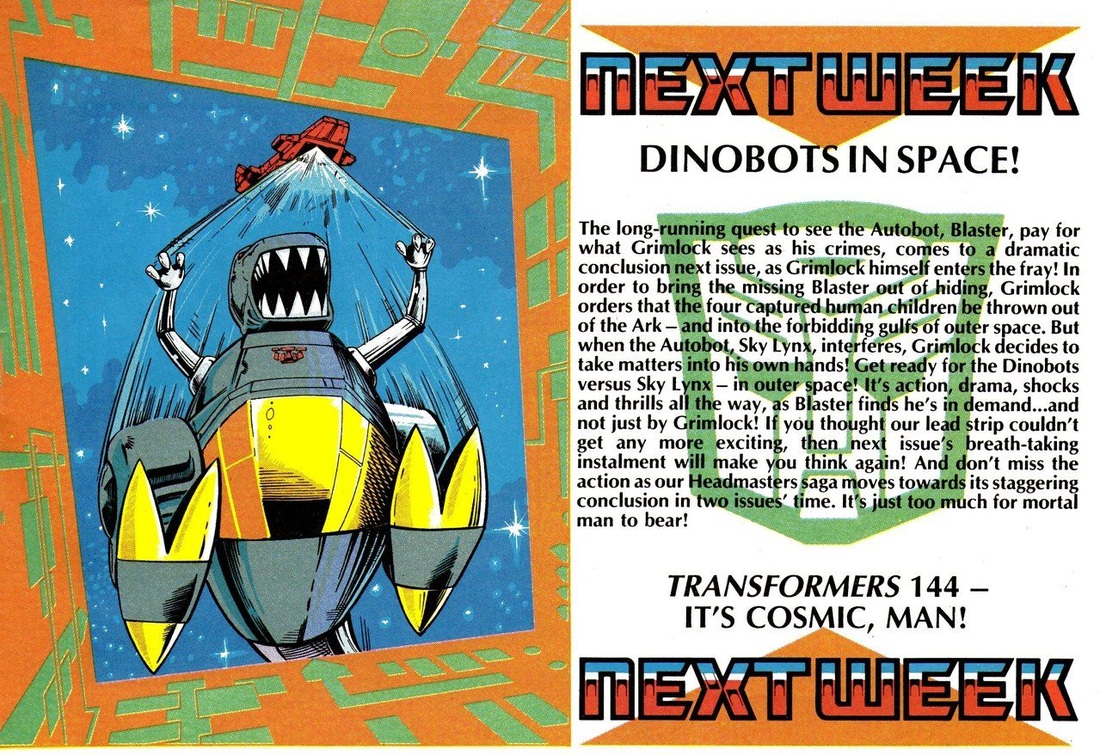