Let This Train Keep on Riding, Riding on Through.


Maybe this is a game we shouldn't be playing!

*Interestingly this part has an exclamation mark whilst the first (and thus the whole American version of the story) doesn't. 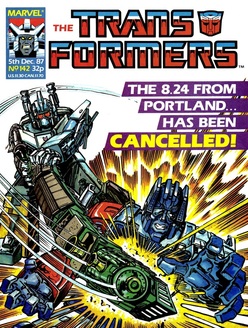 This week's cover isn't the best ever in the series (is Bruticus floating in mid-air?), but it does start a new trend whereby we'll get the occasional American story where one of the covers is basically a straight up copy of the original U.S. one. It's a slightly odd idea; as much as Furman as editor might want to throw work at local artists he really might as well have used the American cover as paid for a rehash.

Dan Reed's take on the pose does improve on the original in one key way, in that the American cover features what may well be Nel Yomtov's biggest moment of shame in the entire series as a cover with only two, large, characters on it has them both block "colored". One of them in pink.

This entire cover based preamble is of course in the service of avoiding talking about those bloody kids. So let's start with what I like about the issue: After what feels like weeks of Every Single Grimlock scene being exactly the same, we finally get some movement on this plot as Beachcomber (!) is putting the finishing touches to the device the Dinobot will use to torture Blaster, the Variable Voltage Harness. 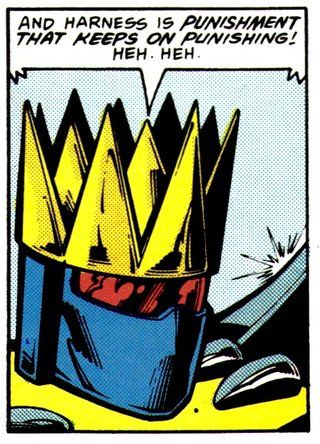 Best bit of the issue.
This is a much more important-and fun-moment than might be apparent when reading the story in isolation, but the VVH is going to become a long running joke in the letters page, meaning for any British reader this is actually a surprisingly iconic moment despite the unlikely idea of Beachcomber being an expert on torture machines. Grimlock's absolute glee at the pain he's going to inflict on the defector is entertaining as well, even if you're still left wondering why the other Autobots are putting up with it.

In terms of the actual story, the real major moment is Grimlock ordering the launch of the Ark in order to go bitch slap Blaster himself. This is of course a hugely important game changing moment; after all, the spaceship in the volcano is one of the indelible images of Generation One. So of course, this significant change in the status quo that would lend itself so well to a splash page happens off panel.

We're spared Ark Launch 2 so we can spend more time in the train yard with the kids and their wacky adventures. Sigh. Blaster as a character has suffered greatly since leaving Cybertron and here we reach his absolute nadir as- after being released by the children- he vows never to hurt a teddy bear.

That's Blaster, the scourge (as opposed to the Scourge) of the smelting pools, the hardcore rebel filled with incurable rage over the death of his best friend. Now reduced to patronising small children by treating their stuffed toys as real people.

But this is the biggest sign yet of a problem the American stories are facing now. The kids featured here are about the same age as the target audience for Transformers. Except Transformers has been running for three years at this point and the original readers have aged with it. There's a huge difference between 8 and 11 when you actually are that old and the American stories haven't been keeping up. Indeed, they likely wouldn't have been able to even if Budiansky wasn't keen to do good solid kids stories as Hasbro would very much want it kept aimed at the key toy buying demographic. 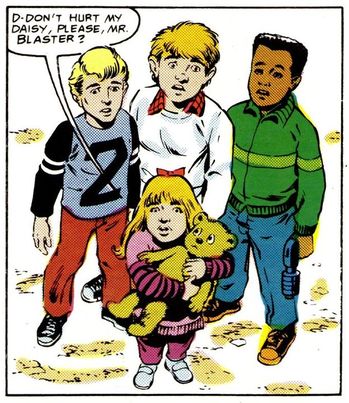 Daisy is actually the only thing in the issue to escape with dignity intact.
The problem of course, is that the amount of new young readers joining the series are gradually decreasing as Transformers fades more and more from popular consciousness. The old readers- the ones who are going to be more than ready for what Furman will give them in the new year- are well on the way to being the core readership and are far less tolerant of this sort of thing than a six year old might be.

Another possible factor, pointed out by regular contributor Tim Roll-Pickering in the comments last week, is that the original American publication of this issue coincided with the end of Marvel's Star imprint, that normally hosted the titles aimed at the younger children, including the bulk of the toy/cartoon tie-ins. These were absorbed into the main Marvel publishing arm, and Transformers may have wound up staring to be treated the same by association.

It's a shame this is the focus of the story as a massive fight between Devastator and Bruticus, even with poor art and misplaced speech bubbles that involves one whacking another with a train could be good fun. Bruticus being defeated because he's fooled by Blaster pretending to be evil and shooting one of the kids (despite having met 3 minutes before the sprog trust the giant robot enough to instantly know he's faking and to play dead), creating enough of a distraction for the Autobot to zap him with a pylon, is just terrible.

However, if it ended here we could probably move on safely with the entire thing being put down to a temporary brain fart on Uncle Bob's part. But, after a nice scene where Hotspot refuses to take Blaster in because he's done a better job of protecting than the Protectobots that would have made for a decent issue ending, it suddenly dawns on you that this is going to go on for another two weeks.

Yes, rather than packing off the kids home, Blaster decides to "reward" them with a trip into space in the mode locked Blast-Off. That's Blast-Off, the EVIL Decepticon. And Blaster who is on a desperate mission to rescue the Throttlebots. Amazingly this doesn't end well, both in terms of a scene of the kids in zero-g that's not even close to funny and due to the Ark turning up and attacking them. Sigh.

If Bob had to go down this road, it would have made more sense for the Protectobots to actually try and capture Blaster again, forcing him to flee in desperation in the Decepticon. Yes, even with the kids in tow if he must. Sadly though, this just isn't a very good story.

This is also the last story for Don Perlin on art. His work has never really risen above the adequate, but compared to some of what we'll be seeing before the British invasion of the American stories he'll be missed more than you might expect. 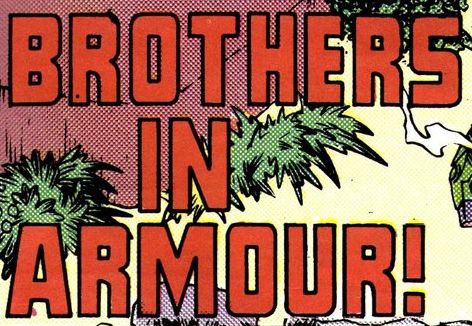 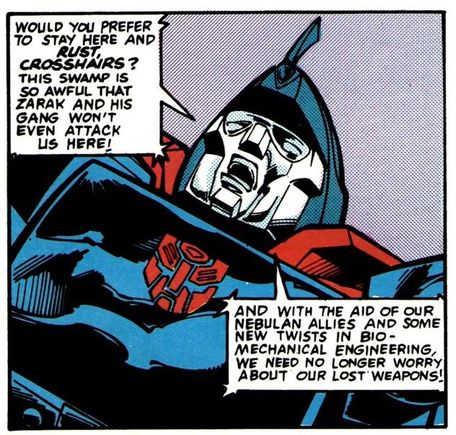 Giving Grimlock a run for his money in the pissed stakes.
The final chapter of Headmasters kicks off with the (complete with changed spelling for the UK) Brothers in Armour! Part 1, which after some slightly odd bubble based shenanigans, sees a late in the day return to form.

Things get off to a brutal start as a group of Autobots led by the Monsterbots are slaughtered whilst trying to defend a Nebulonese tourist spot from the Decepticons. This is quickly followed up by a fantastic scene of Zarak talking to the local news that, though basically just a recap of events so far, is hugely entertaining in presenting Galen as an insane warmonger. The close of the scene with him declaring the fight a victory despite the destruction of the garden is nice and creepy as well.

Meanwhile, the Autobots who are both still alive and still at large are pissed and in disarray. So when Hot Rod picks up an Autobot distress signal from Earth (which we won't actually see sent for a while yet), serious thought is given to just buggering off and leaving the Nebulons to Scorponok. Though you never really doubt they won't stay to save the day, it's still an incredibly tense and angry scene that feels like it's from a completely different author to the lead story.

We're also introduced to what will become the Targetmaster Nebulons, and unlike the cartoon there's an actual explanation for them having completely different style names to their fellows (they're rebels using codenames to protect themselves). None of these characters will ever get any development, but it's worth noting that despite what you may have read elsewhere Hot Rod's future partner is still called by the inaccurate (early working?) name of Sparks rather than it being changed to Firebolt to match both the toy and the earlier name check of him back in Headhunt! An odd miss from the UK team there, especially after the effort with Cyclonus a few weeks ago.

Coming Soon.
The rest of the comic is mainly concerned with the future. Not only does Transformation tease both the Christmas story and the end of Headmasters (the first time in ages the comic has actually mentioned the backup), there are no less than three mentions of the story starting in the New Year, one on the sidebar and two in Grimgrams.

In-between saying how good the new story will be (because he's in it), Grimlock also clarifies exactly when Headmasters is happening in relation to the main strip- starting before Prime's return to Cybertron in late 1986 and taking a full year till the end of 1987. This doesn't actually fit in with when the message Hot Rod picked up is sent, but points for trying. As an almost throwaway comment at the end of his response to Brett Drennan of Glastonbury Grimlock also says that Worlds Apart! occurred during Brothers in Armour!

Next week: The arrival of Sky Lynx and Jose Delbo. One of these is a good thing.


[For those waiting on tenterhooks, the James Roberts and Special Guest interviews should be up in early February now. There's some exciting stuff to come, including something that may be a world exclusive in terms of the history of the comic in a certain country.] 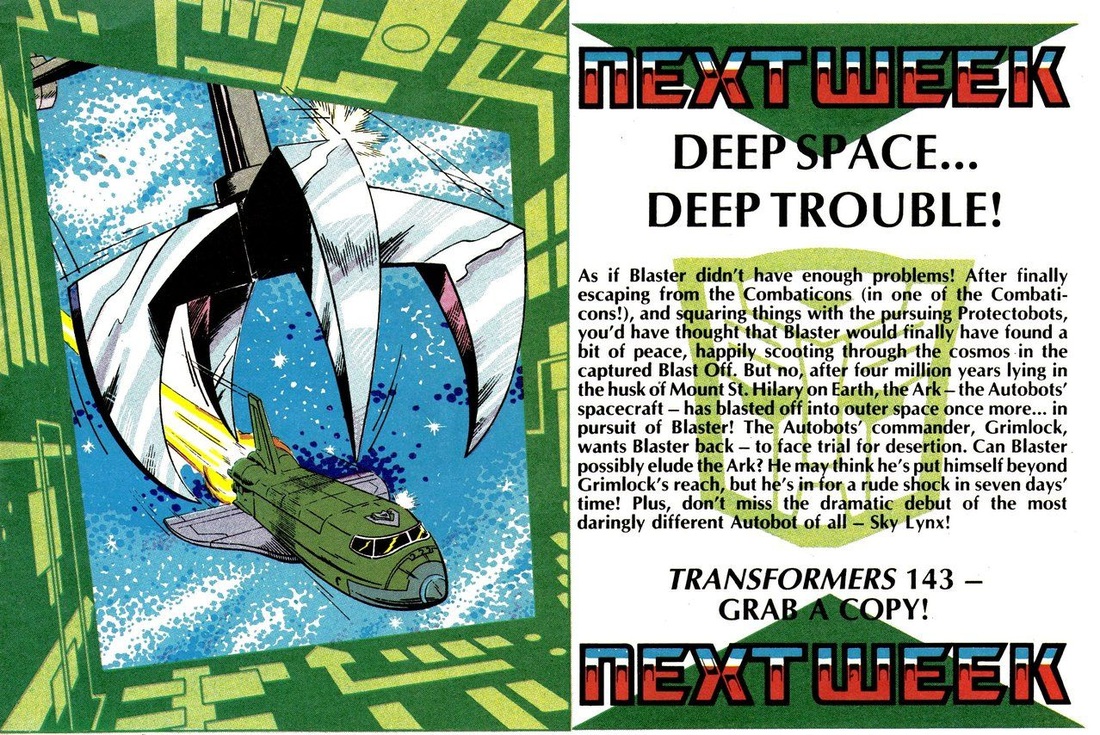