The Kids Are Alright.

A tank?! A jeep?! They're certainly not standard maintenance equipment! 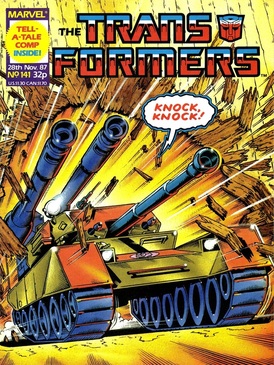 Imagine, just for a second, that you are an American, if it helps put on a ten gallon hat and pour a glass of root beer to go with your pretzels. For you the two month gap since the end of Used Autobots has been filled with Man of Iron, an unexpected British reprint focused on a small innocent child caught up in the insanely dangerous war of the Transformers that would have felt completely unlike anything you've seen in the book (or likely any comics) before.

Though it's a complete coincidence, it's strangely appropriate this reprint wound up sitting next to a Bob Budiansky story that is very much his take on the same idea, albeit this time involving three children rather than one. The shame of it is that as this theoretical American you've been completely screwed. For us Brits the downturn in quality from last week is more a short stumble, coming to it off the back of Steve Parkhouse's weird and beguiling story of death in English country woods must have induced severe whiplash.

Let's not mince words here, as much as I try to be as positive and upbeat about the comic as possible- and as much as my respect and admiration for Uncle Bob has increased tenfold over the last decade- this is a strong contender for his worst single story. With its main competition being the following adventure focusing on these bloody kids.

I mean, just look at the opening splash page, three kids playing "Space Wars" (not to be confused with Star Wars), in a railway siding that looks as if Don Perlin only had art references from the 1930's. Is there a single less exciting opening to a Transformers comic in the annuls of history?

So let's ignore the brats for now, and focus on what's to like about the issue. I generally enjoy the way the Protectobots aren't taking any chances and have Blaster mode locked as a tape deck, tied to Groove in bike mode riding inside First Aid as the group travels to the Ark.

Well, that was short and sweet. In the OK category lands the arrival of the Combaticons (complete with comedic double take from an old fashioned railwayman), and the ensuing fight between Defensor and Bruticus. However, whilst fine in principle Perlin has, after making a decent fist of it last week, returned to not quite being able to pull off fight scenes.

In the mildly painful territory is the scene of Grimlock on the Ark. Which is exactly the same as every other Grimlock on the Ark scene we've had since the crown arrived, so we'll quickly skip over it bar pointing out it's established the Ark is all ready to fly again. 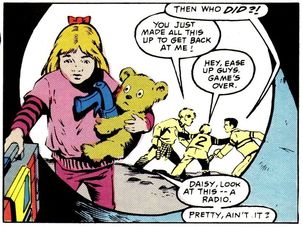 Maybe there'll be Turtles down there.
Well, there's no avoiding them now. Let's talk the kids. The first thing to note is how much time is spent on them just playing their games, especially in relation to how much we got of Sammy playing Red Indians in Man of Iron before Jazz appeared. It's not funny, it's not sweet and it's seemingly written by someone who has heard of children as an abstract concept but isn't entirely sure if he's ever met one.

Don't bother committing their names to memory, despite the amount of page time they'll be getting it's really not worth it. Just marvel at the fact one of the main sources of humour is The Girl One has a teddy bear she treats as a real person. This will only get worse in the coming weeks.

The real difference between this and Man of Iron is that the former, like all the best fiction where children are thrown into a strange new world, has teeth. There's a real sense of danger to Sammy's adventures, whilst these kids, even when confronted by the site of two gestalts fighting after finding a talking tape deck (hidden by Groove in a pipe) begging for their help, never escape from the most surface level and dull hijinks. One can only hope the second half will up the pace. 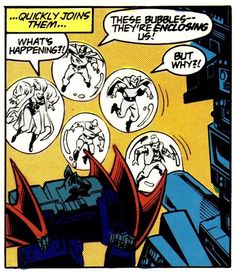 Forever blowing bubbles.
Love and Steel! Part 4 is pretty much a relief after that and actually has a nice solid concept at its heart. A stray shot brings down the council ship, and Mindwipe hypnotises the Nebulons to go walk into the bubble trap. Whilst it's a problem that Vorath doesn't recognise Llyria as someone the boss wouldn't want hurt (maybe he's undergoing his own epic inner-power struggle?) this leads to the best scene of the entire issue as Scorponok sees her floating off and is shocked... Before the Scorponok part of his mind takes over and promptly doesn't care. It's a great little moment that just about overrides the silliness of the bubble concept.

The Autobot Headmasters manage to save the Nebulons by shooting the bubbles (complete with dodgy physics- falling onto a helicopter from that height should break all your bones), but the distraction lets the Decepticons shoot them all in the back, and with Llyria and the others confused by hypnosis Zarak can pass himself off as the hero of the day. It's a nice dramatic conclusion to a somewhat meandering chapter in the story that suggest the final quarter will rally round to a decent conclusion. 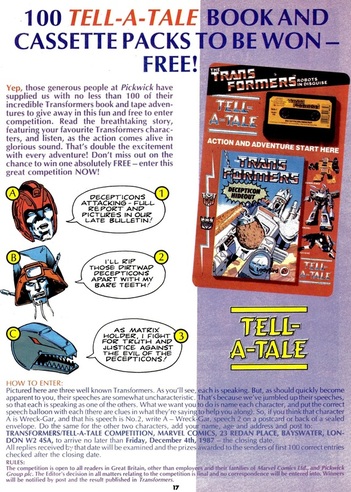 Guess who.
Unsurprisingly Transformation tries to make the focus of the issue the combiner fight and only makes the most token mention of the kids, but it's still a rather desperate read as if the editorial team doesn't feel hugely excited by the lead strip, with the Next Week box coming over as similarly unimpressed.

With the end of the year looming we get our first hint of what's to come in 1988 in Grimgrams, as Grimlock tells Matthew Parr from Exeter that the next backup strip will be Iron Man again for at least a "few" issues, suggesting that by this point Marvel UK knew the writing was on the wall for Action Force and an exciting merger was on the cards. There's also a neat little Doctor Who joke as Grimlock describes himself as having an "Open pleasant face", the shorthand description of the Fifth Doctor used by Terrance Dicks in the Target books.

There's a competition for the latest Tell-A-Tale Ladybird book; Decepticon Hideout; that requires you to match the dialogue to the character. Though "As Matrix holder, I fight for truth and justice against the evil of the Decepticons!" doesn't sound very much like Rodimus. The issue is then wrapped up by King Kog getting taken out by a random asteroid in Robo-Capers.

Next week: Teddy's in space. 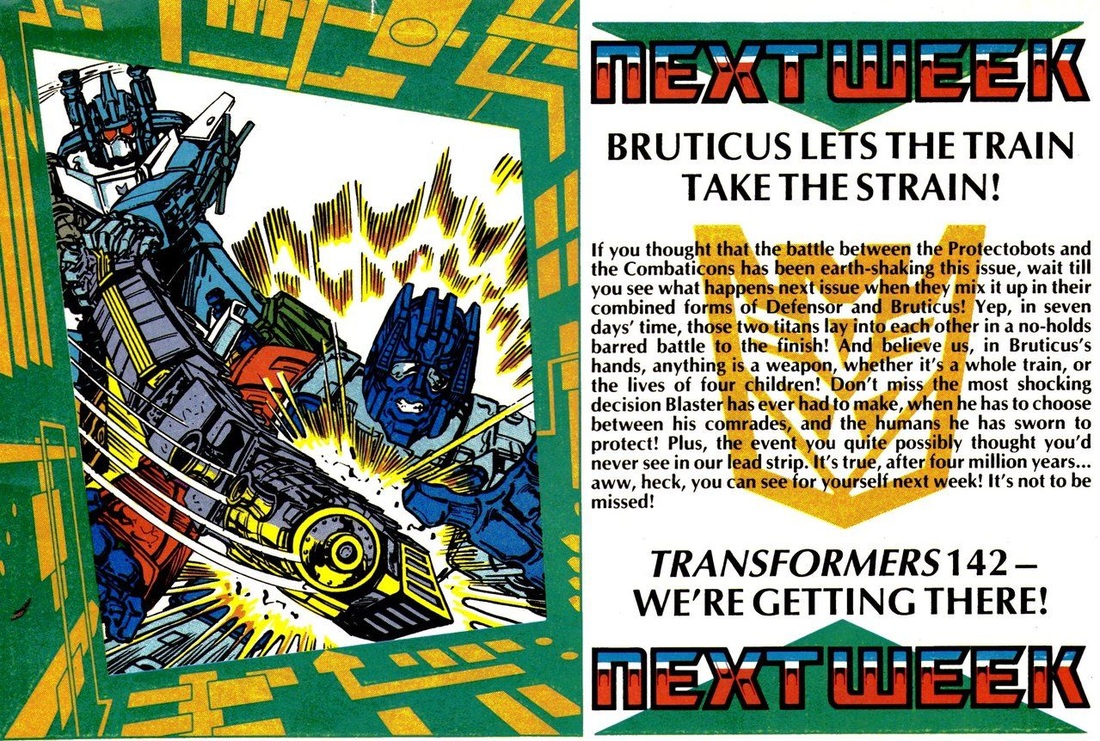