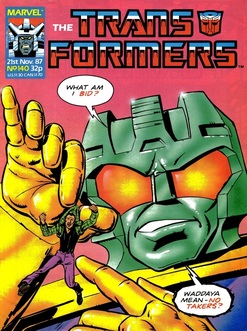 Anyone who wasn’t already bored by the stock used car salesman stick that we were submitted to last week, will no doubt have even their limitless patience tested as his wacky antics continue into the second half. Starting with his reaction to being confronted by a bunch of Throttlebots, which is to assume their working for the government, causing him  promise to let the couple he just sold a junker to “Return, er... exchange” the car.

Pretty much every scene with him in throughout the issue is in a similar ilk. Chortle as seeing Groove have a car thrown in his face by Vortex makes him bemoan “No! I already sold that Buick—for triple what it was worth!” Guffaw as he wonders if he should offer a discount on another car that’s been smashed. Cheer as he gets his comeuppance at the end when Blaster destroys the check RAAT has given him.

HA HA HA HA HA HA.
Even though he’s actually an innocent victim of robot violence whose worst crime is obeying the laws of his country. And presumably he could just call back the RAAT number and explain the check has been destroyed by the robot they failed to capture and could he just have another please?

Thankfully there’s more to the issue than just Budiansky working through the issues he has with the first used car he bought. After Steve takes the Throttlebots out by putting sugar in their fuel (oh yes, they basically scare him into helping them. But he still apparently deserves a comedy take down for not going along with it) he calls RAAT in, leading to the fun part of the issue.

And no, I’m not going to make a fuss out of sugar taking out a sophisticated robot person’s innards, at this point Uncle Bob has given the Autobots enough handy unlikely weak points it’s pretty easy to roll with. Shame it wasn’t water though, as a substance unfamiliar to the Transformers it could have legitimately had an odd effect and it would have been nice continuity.

The fun comes from the fact that it’s not just RAAT who show up, but also the Combaticons (still pissed) and Protectobots (under orders from Grimlock), arriving with their own agendas.

The resultant bitching between Hot Spot and Onslaught is genuinely very funny and seems to have wondered in from a different comic to the Steve stuff. It’s just a shame Walter Barnett is so resolutely thick he just assumes they’re faking being enemies (as part of RAAT’s “NAH NAH NAH NAH NAH THERE ARE NO GOOD ROBOTS” policy), when it would have worked just as well if he hadn’t cared either way.

This leads to Big Steve’s main contribution to the story: Suggesting a bidding war between the three parties. Now, as you’ll have guessed from both the cover and his general character, this is the point Swindle steps forward and uses his wheeler dealer ways to create a highly entertaining auction sequence... 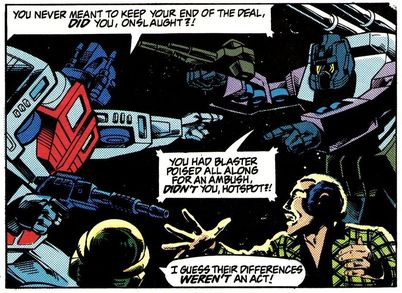 Battle of the faceplates.
Oh wait, no. Onslaught leads the Decepticon bidding, whilst Swindle is on ambush duties. And things don’t get very far before Blaster has to make a choice: Save the Throttlebots or stop Swindle killing Big Steve (why he decides the one unarmed person present should be his first target is hard to tell).

Of course, Blaster stops Swindle, which leads to another delicious scene of Speacial Teams Leader Bitching. Which is then followed by what is probably the closest Don Perlin has yet come to making a big fight work,  with only one story left of his stint as main artist to go.

Weirdly Blaster joining the fray is enough to send the Combaticons packing (is he really that powerful by himself?), but RAAT get the Throttlebots. Blaster is rather smug after pissing on Big Steve’s check, but his efforts to push the Protectobots about completely fail as Hot Spot isn’t a biatch like Goldbug is. So in an effective cliff-hanger, and the closest thing to proper drama in the issue, Blaster is to be taken back to the Ark for trial and execution!

This has some nice moments, mainly around the combiners, but the weak car comedy and general lack of energy to the whole thing drags it down hugely. Come on Uncle Bob, we all know you can do better than this. 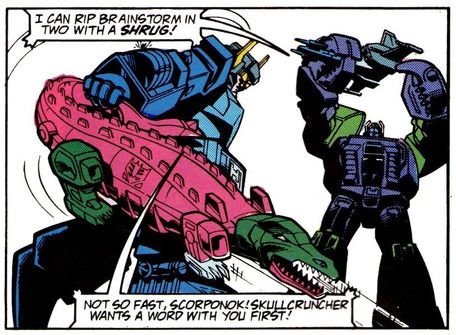 Crocodile skin suitcase: You're doing it wrong.
If the main strip shows the author on an off day, then the third part of Love and Steel! sees him on an entirely adequate one. Things start off with the continuation of the soap opera a Galen can’t understand why a committed pacifist doesn’t want to date him anymore now he’s a dedicated war machine. Women, hey?

She’s not just there to be sexually harassed by her ex though, Llyria also has a message “Sneaked out” by her father claiming he’s been captured by Scorponok and he needs Autobot help.

Unsurprisingly, this is a trap. More surprisingly, Scorponok has, in what seems to be a very short space of time, perfected the amazing and unprecedented Headmasters process himself. And has carried it out on the people he was threatening to kill last week (including the only captured to be killed Monzo), presumably in the hope he’s not going to join minds with someone who is really pissed off with him.

Exactly how well the joining between Zarak and Scorponok is going to work is shown by the fact he’s already compromised his beliefs enough to involve his daughter by tricking her into passing on the message. Then, when he slaps onto Scorponok’s shoulders he revels in the power he now has control over, exactly as he was warned last week. I wonder how he’ll cope when he finds out Llyria is amongst the observers from the government flying overhead?

This growing conflict in Zarak’s mind is the most interesting part of the issue, with the low point being Chromedome actually asking out loud “What happened to their heads?!” when he first sees the Decepticons. I don’t know Chromey, what could possibly have caused them to take their heads off? 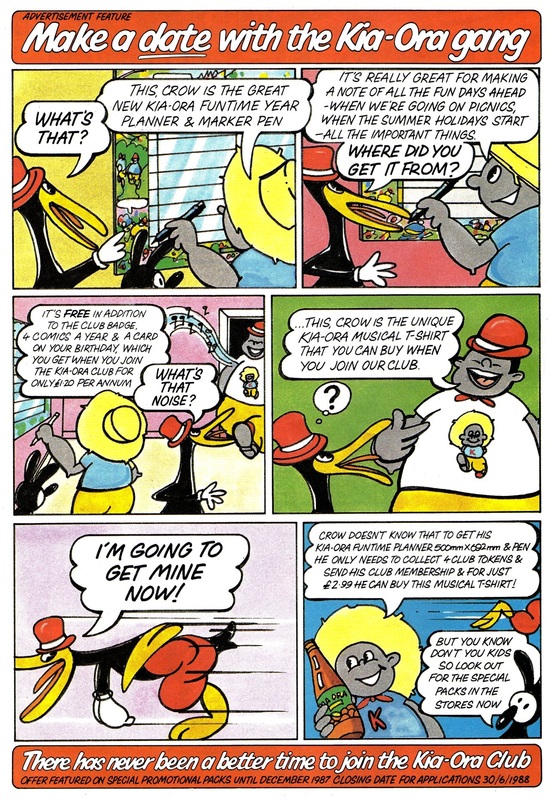 An incrediably racist Kia Ora advert.
Transformation rather sweetly cements the idea in the reader’s mind that the Combaticons are after the Throttlebots for the events of two weeks ago, meaning even though it’s not referenced in the strip itself that link is still implicit. The really important bit of information comes in the sidebar though, as we’re told that issue 146 will start the most “Shocking” Transformers story ever, with a truly amazing return in it. Unlike some of the more recent attempts to make the stories seem epic and exciting, this one won’t be hyperbole.

The future is also on the mind of Grimlock on the letter’s page, as he explains to Mark Williams of London (presumably taking time out from telling you what he has been mostly eating) that Lord Straxus may not be entirely gone from Megatron’s mind. Again, this shows how far ahead Furman is thinking here as there will be no hint of this, or any presence for Megatron in fact, until April 1988. Though this foresight is somewhat undone by having Grimlock claim Skywarp is definitely dead when Budiansky will bring him back towards the end of next year.

Grimlock also teases the New Year epic by telling Graham Richardson of Prestwood (who knows who Scattershot is from a catalogue. Remember those kids?) that the presence of Cyclonus and Scourge in the present will be covered soon. In a story so secret no one will tell him what’s going to be in it!

We also get an apology for and the final part of the letter that was cut short in issue 131, plus an assurance that toys bought abroad are probably genuine even if they don’t have the rub sign and normal packaging. All in all, a very packed Grimgrams this week.

Excitingly, we get a double page poster as a free gift. Less excitingly, it’s just a super enlarged version of the Targetmasters advert. Apparently the editorial team though it was pretty, but your mileage may vary. The issue is then rounded off with a Robo-Capers where it turns out King Kog is as immune to King Nonose’s charms as Thatcher was.

As a small, but still important, final note this is the first issue where the lead story has a recap border, the full example of which can be seen at the bottom of the page. 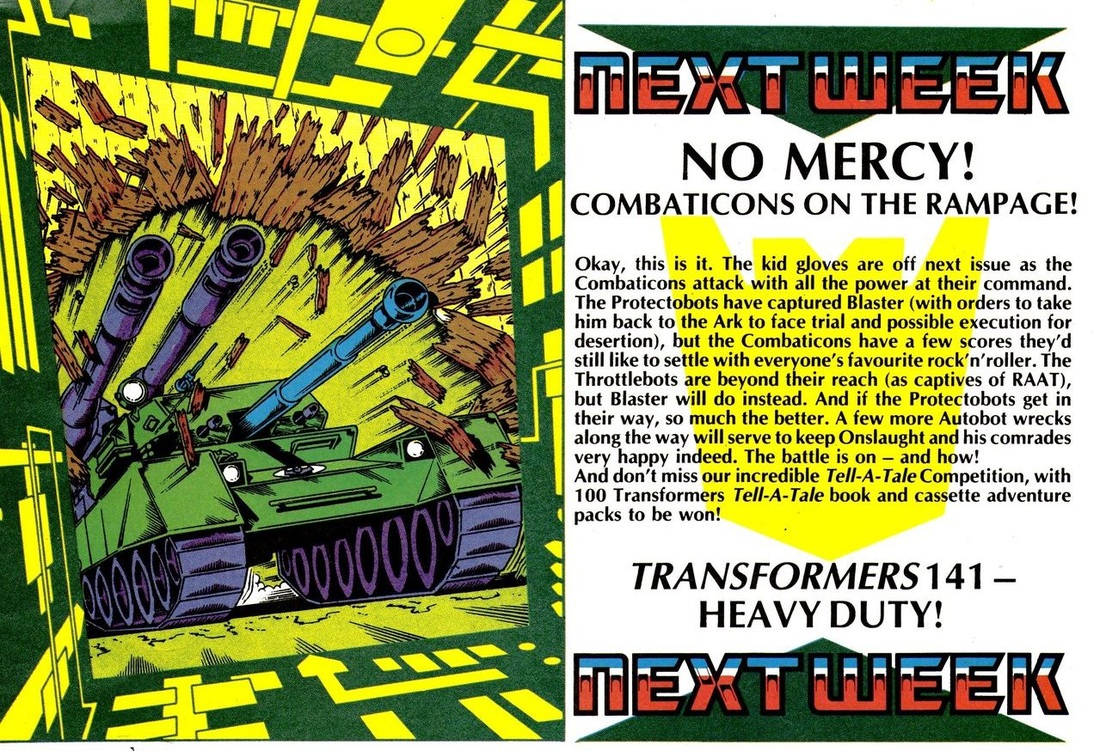 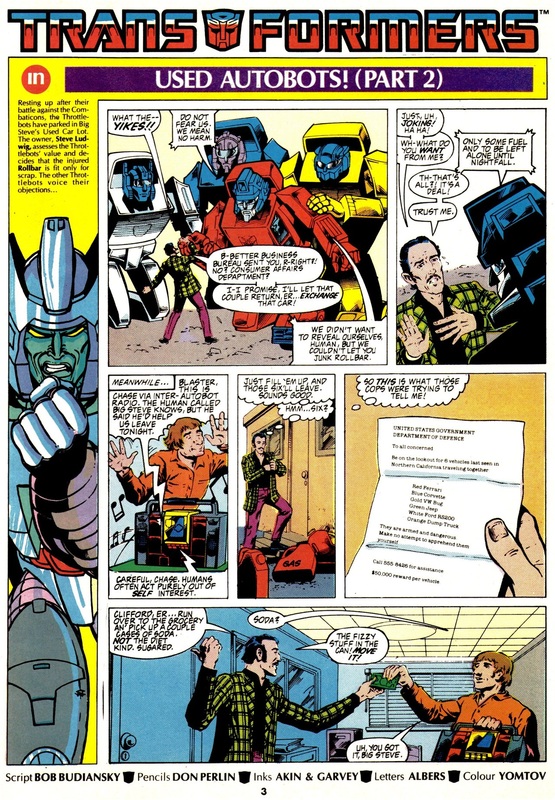