One Way or Another, I'm Gonna Get You. 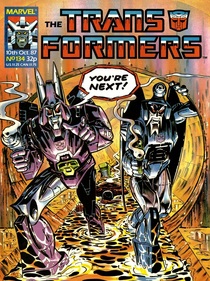 If the purpose of this story was to start to move Death's Head towards his own comic, then the second part marks the point where the Transformers Universe starts to warp as a result and we get what is effectively a fully formed Death's Head style adventure that just happens to feature giant robots.

The difference from last week is almost immediately apparent. That, in keeping with the bulk of the UK stories, was a relatively serious action thriller with moments of humour. This second part on the other hand is a full on comedy of errors with a wit and self awareness that will become standard for the mechanoid's solo book.

It is of course also extremely 2000 AD, but finding a British writer working in the medium who wasn't influenced by The Galaxy's Greatest Comic at the time would have basically been impossible. Fair to say it wouldn't take a huge amount of rewriting to make this a story about Joe Dredd or Johnny Alpha chasing a couple of perps beneath Mega City One or Milton Keynes. 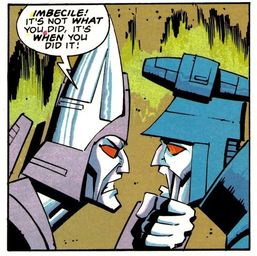 Best panel EVER.
The advantage of this is how fresh and fun it feels. Take the opening scene of Cyclonus and Scourge arguing over Death's Head's body (yes, last week's blast was them sneaking up behind him) like an old married couple, complete with a glorious panel of Cyclonus grabbing Scourge by the beard. The back and forth banter is perfectly played and is possibly the best in-story recap of the previous week's events the comic ever did. The gag also has the perfect payoff as their bitching at each other over Scourge blasting Death's Head before he could kill Rodimus allows the Autobot leader to just wander off.

The comedy continues as the two Decepticons run about the sewers acting all macho before it turns out they couldn't even kill Death's Head properly resulting in them running away like scared little girls, shoving their actual target of Prime out of the way as they leg it.

If there's a weakness to the issue it's the thankfully brief scenes of a wounded Rodimus stumbling around the sewers, which are played a bit too seriously to lie easily with the events surrounding it. Plus, retrospectively, we know his epiphany over the fact he has a commitment to the other Autobots that makes it essential he lives and leads them well won't last and future stories will return him to being unhappy with his lot in life. 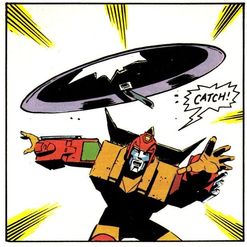 Take that Winter Soldier.
Thankfully things pick up for Rodimus when he meets the main plot, and his fight with Death's Head is, however brief, well done by Senior (do I really need to say how much Geoff Senior is Da Man at this point?), with the highlight being him using Death's Head's own shield in the patented Captain America style.

The ending does somewhat peter out, it just so happens there are signs in the easily accessed by Decepticons sewers that point you at the secret entrance to Autobase (seriously, Prime really needs to work on his security), allowing him to lead Death's Head into the arms of his waiting troops.

However, if this isn't a completely satisfying ending for this story as a solo piece, it still does its job well of setting up the big story that's going to open 1988 as Rodimus offers Death's Head a lot of money to kill Cyclonus and Scourge for him, a welcome return of the pragmatic bastard we were introduced to back in the second part of Wanted...

Overall, this is a lovely little story that shows Furman can make the two parters matter as much-if not more- as the big multi-week epics. Yes, you can tell Death's Head is his darling as the Peacekeeper gets all the best lines and even the characters created by the devil are scared of him, but this doesn't harm the tale and it certainly makes it look as if a Death's Head series would be rather fun.

Wonky boobs.
The beginning second chapter of Headmasters, Broken Glass!, suffers from an unfortunate side effect of the broken up British printing as opening with a splash page means there's little chance for much to happen in the remaining four pages.

It also feels as if Budiansky is starting to lose his way a bit with Lord Zarak, whilst he actions in the last four weeks were cynical an argument could still be made that he thought he was genuinely acting in the best interests of his people. Here he's more unambiguously evil, staging riots to undermine Galen's leadership that wind up getting the Roddy McDowell wannabe beaten up. This becomes even more dubious when it’s revealed Galen is in a relationship with Zarak’s daughter Llyra (a woman who thinks wearing the world’s tiniest crop top to a political demonstration is a good idea. No wonder Frank Springer can't seem to focus on getting the robots right. For those keeping track, she's yet another perky Budiansky blonde), he's trying to usurp his future son in law.

The highlight of this instalment is the revelation that the Autobot heads are sitting on a shelf gathering dust, leading to a dull cliff-hanger of Maximus threatening to recap events on Cybertron for us.

With the year starting to draw to a close, Transformation is all about Annuals, bigging up not only the Transformers book but also Action Force and Thundercats, with a competition later in the issue to win all three that, based on the questions, likely run in the other books as well. Interestingly there's no promotion for Annuals based on the more traditional Marvel heroes, or even other licensed properties (remember the SAS one from a couple of years ago?) this time around. 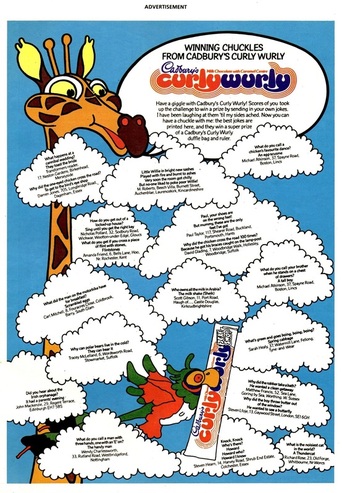 Track down those kids.
On Grimgrams, Steven Gray suggests that as there are five Dinobots they should be rebuilt into a combiner, a suggestion Grimlock wisely shoots down as it's utterly ludicrous. Meanwhile Mark Fletcher from Dalbeattie becomes the latest person to complain about the book finishing stories it starts in other places, cheekily saying the stubbies should just have a whip round if they're that strapped for cash.

A full page is also given over to the 25 winning jokes from the Curly Wurly competition, with my favourite being "Who owns all the milk in Arabia? The milk sake (Sheik)" from Scott Gibson of Castle Douglas. Just because he, or at least the person who put the page together, felt the need to explain the joke in brackets.

It's actually funnier that, two weeks after warning children of the dangers of child molesters, the book prints the names and full addresses of 18 readers (oddly Transformation claims 25). Hopefully no one received anything odd in the post.

Next week, we take a brief break from setting up 1988 stories in order to tie into the Annual again. Will this go better than last time?

And no, I didn't win first prize for my Tom Baker costume (seen at the bottom of this page in all its glory) I was robbed. 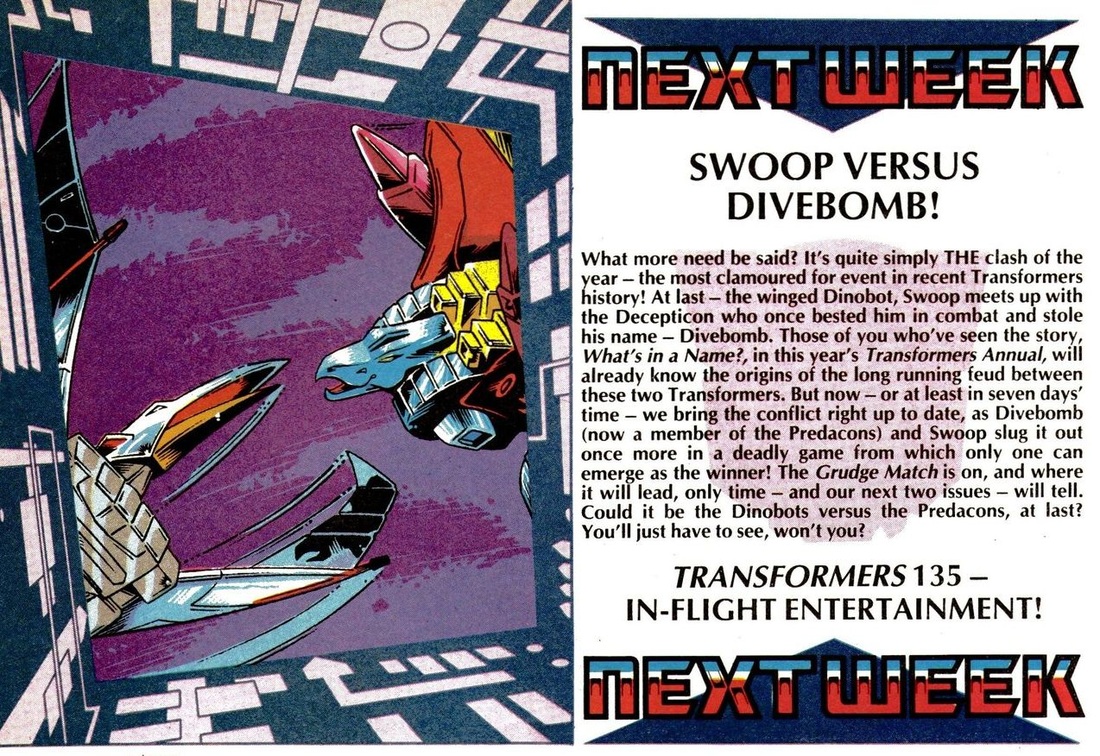 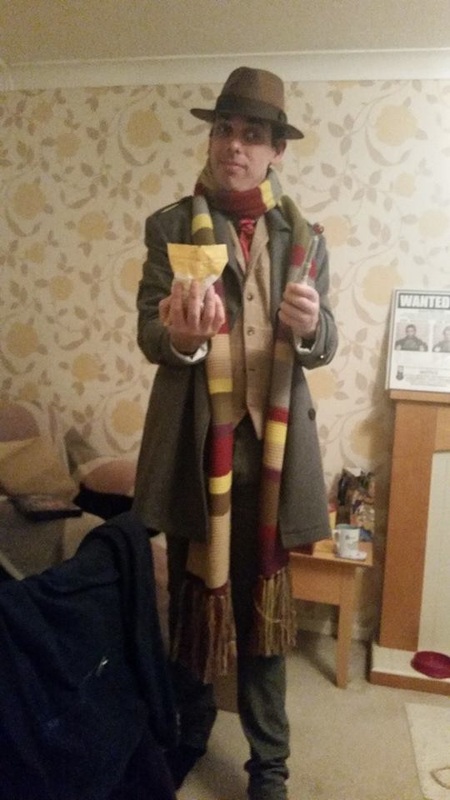