It's all About the Money. 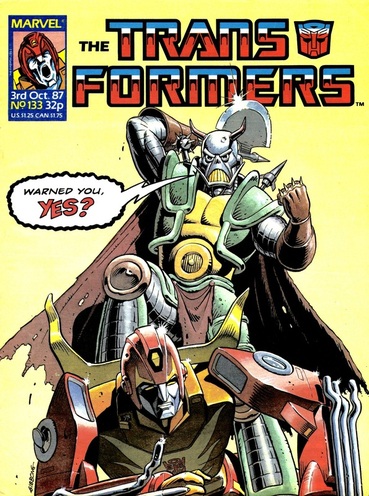 The 133rd issue of the regular comic, two Annuals, two sets of Collected Comics, one film, one film comic, one poster magazine and ten Addendums all add up to this being the 150th entry in this series. A nice big round number that sadly doesn't come with a wraparound cover or free gifts, but at the very least we've got an issue that's both important and extremely good.

The first sign there a lot more riding on this issue than might be apparent from the contents is that the cover is by Dave Gibbons. This was published the same month that Watchmen finished its 12 month run and would have seen him at the peak of his fame. As with Alan Davis on issue 100 this is the result of Furman taking advantage of a big name having children who are fans, but what's telling is that he doesn't commission Gibbons for something that could be kept in reserve for the forthcoming issue 150 (the entire premise of this story is based on the assumption the comic will reach this milestone) even though that would seem to be the obvious attention grabbing gimmick to aim for.

But at this point, Richard Starkings' plans for a shared Marvel UK Universe of US format books was beginning to ferment and- though he'll have to go round the houses to get there and thus won't be the first one out the gate- Death's Head was by this point intended to star in one of those books. This story is effectively as much about starting to get him into that position as it is about laying the groundwork for the big one-five-zero and it would have almost certainly been obvious to Furman that having Gibbons draw the character, however briefly, would be an excellent promotional point, especially when selling the character in America. It would actually be very easy to crop Rodimus out of the cover image entirely to leave you with a really nice Death's Head wielding an axe image that would serve the PR well.

Behind the Gibbons cover we have Dan Reed art, which if you were going to be mean is a bit of a come down, but then it would have been for just about anyone bar Senior. It's actually another sign of how Furman was fonder of Reed at the time than he is in retrospect, this is an important enough issue for more care to be put into the choice of artists on it than the usual "Whoever was next on the roster" approach.

Despite making Death's Head more anaemic than is perhaps ideal (he's a character who really needs that Senior given bulk) there's some nice stuff from Reed here, with some especially well thought through layouts, in particular how the pages establishing the Autobot and Decepticon bases are mirror images of each other.

Story wise, we pick up on a dangling thread from a part of the conclusion to the Volcano story the readers did get to see as the Decepticons (wonderfully represented by Blot, part of the fun of the comic having to do toy promotions as they go along is at no other point in Transformers history would Blot be picked for this role) hire Death's Head to assassinate Rodimus Prime.

As a sign of the character is basically going to be joint lead for this story, we get an entire page building up to his first full splash appearance (knowing Furman, likely influenced by Dr. No) and he fully takes control of the situation, refusing to kill Prime for revenge and instead forcing the Decepticons to pay him big money for the privilege. Blot effectively spends his one moment in the sun serving as a way of making Death's Head seem awesome. 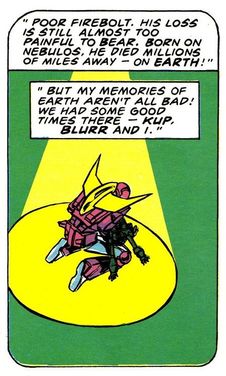 He shot his bolt.
It's not all about selling the future star of Marvel UK though as we get some work on our two future leaders as well. In the case of Rodimus Prime this is mostly about emphasising what we learnt about him earlier in the year: The war weighs heavily upon him and he wishes his responsibilities would end. This is necessary to set up the irony of the cliff-hanger, but the more interesting moment is seeing Furman deal with another piece of fallout from the repurposed Targetmaster toys: Why haven't we seen any Nebulons in the future stories?

So we learn of the death of Firebolt before the backup has even introduced him. It's unlikely Furman had any idea what killed the little guy on Earth, but it makes for both an excellent mood switch between Rodimus' happy recollections of his youth and his current sombre mood whilst providing fodder for future fan fiction writers.

However, the real interesting stuff is over at the Decepticon base as we get our first glimpse of future Shockwave's leadership. As in the present, he's a cunning manipulator who has deliberately hired Death's Head knowing it will royally piss off Cyclonus and Scourge following their last encounter with him, thus setting them off on an obvious to everyone else suicide mission to take out both the Peacekeeper and the Autobot leader. Something that will neatly remove two loud blowhard relics of Galvatron's leadership and possibly killing Rodimus, all without Shockwave having to do a thing.

Buy my comic, yes?
This court intrigue is perfectly played by Furman, and ends with the memorable image of Shockwave laughing hysterically at the stupidity of Cyclonus and Scourge. Something that takes on an extra irony in retrospect as he has effectively set in motion the events that will lead to his own death.

The second half of the issue is given over to the Rodimus/Galvatron fight. This has a fantastically macabre quality to it as a bored Rodimus on a trench inspection first fails to notice his guards get picked off and then falls for thinking one of their severed heads chucked in his direction is a grenade, allowing Death's Head (and note how this whole sequence makes him seem more awesome than Rodimus in every way, it's practically begging you to buy his eventual comic) to get the drop on him before a covered over hole gets the drop on both of them and they fall into the sewers.

This leads into both the best remembered line of the story- as Death's Head laments the loss of his favourite axe- and one of the greatest cliff-hangers of the entire series as Rodimus winds up with a gun in the back of his head followed by a massive explosion. The tension is added to by the simple (and accidental as Reed apparently didn't leave enough room for the traditional formatting) means of not including the now standard NEXT box and instead replacing it will a smaller, nervous looking "NEXT..?” The whole effect is further augmented by the usual image of Rodimus in the information box on the cover being replaced by one of him seemingly screaming with pain.

Despite the need to manoeuvre characters into specific positions for future stories, this is great elegantly written fun that takes its simple premise and runs hard and fast with it to create a hugely memorable adventure, with only Death's Head's easy infiltration of Autobase (how is the war in a stalemate if one man alone can do that?) not being entirely convincing. 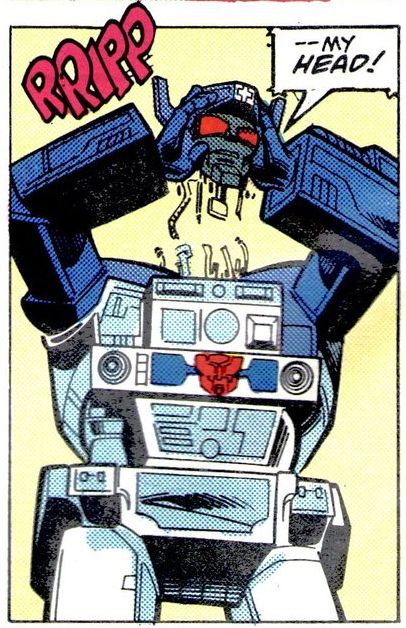 FOR PEACE.
The final part of Ring of Hate! climaxes with the most infamous moment of the entire miniseries, and one that rather undermines what has been a generally quite strong opening act.

It starts fairly promising as we see parallels between Galen and Maximus dealing with the increasing aggression of their own sides by performing an act of trust to preserve the peace.

The problem is that, whilst Galen's act of trust- simply not firing on the Autobots as they approach the newly fortified city- makes perfect sense, Maximus' is insane enough to suggest he's lost his head in more ways than just the literal.

Yes, he removes his head. For peace.

He removes his head.

Which is made even more ludicrous by him carrying on talking after doing so, which should really suggest to the Nebulons this isn't as great a sacrifice as it would be for one of them. Even when some of the other Autobots (guess who) follow suit that still leaves the ones like Kup who were most cruising for a bruising without the calming influence of their leader, making you wonder how this could possibly end well.

There's also something faintly sinister about Fortress Maximus' attitude despite his grand gestures. The Nebulon leadership don't want the Autobots on their planet and have made this very clear, the real best way to achieve peace would be to leave, and after all they were hardly invited guests. But no, Maximus shoots down the suggestion of going back to Cybertron (or anywhere else for that matter), the Autobots are here to stay whether the locals want it or not.

The cartoon actually handled this better, no one takes their head off until they're about to become Headmasters and the whole idea is well set up in advance by one of the early scenes in Rebirth establishing Brainstorm's theory on merging humans and Cybertronians. This on the other hand just comes out of nowhere and seems totally random. 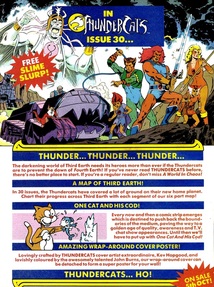 Ho!
The comic itself is slightly larger this week to allow room for some of the bonus features and competitions, something that Transformation unsurprisingly makes great play of.

The first competition is for Transformers: The Movie on VHS, whilst the second sees Rice Krispies challenge you to take Snap Crackle and Pop's music quiz to win a tape deck. Based on two of the three questions Snap, Crackle and Pop are big Wham fans.

Grimgrams sees Jason Hotchkin from Peterborough point out something I missed, namely that AtoZ skipped Bumblebee. Grimlock explains that the character will be covered under Goldbug instead, though Bumblebee himself may get included with the film characters. I suspect this won't actually happen, but it does show how convoluted Bumblebee's chronology has become.

This week's AtoZ is spared any such temporal confusion as it sticks to characters that have, thus far, only appeared in the present: Defensor and Devastator. There's also a full page advert for issue 30 of Thundercats suggesting that book is undergoing a relaunch/promotional push similar to the one for Transformers three weeks ago.

Next week, is Rodimus Prime dead? What will Fortress Maximus do in the event of an itchy nose? Will I win first prize at the fancy dress party I'm going to on Saturday as Tom Baker? Find out on Friday. 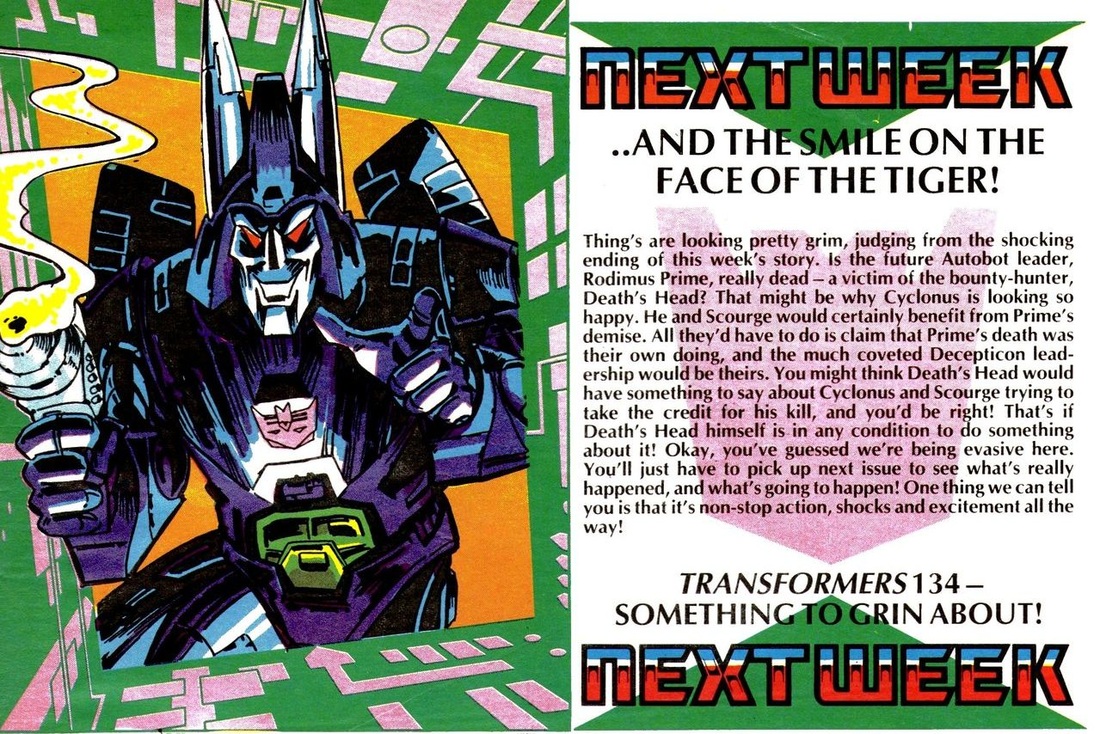