Let's Get Ready to Rumble. 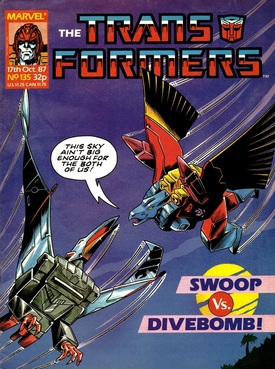 On the surface, the origin of the next month's worth of issues seems relatively straightforward. With the American reuse of Man of Iron freeing up four weeks’ worth of extra material late in the day we get two two part stories that, whilst not exactly treading water, are probably the most inconsequential of the original UK material of 1987. They only lightly tie into the various ongoing plots, there's no massive crossover or special events behind them and it would only take minimum rewriting of Enemy Action! early next year to completely remove them from the series.

What would seem to shoot this down is that Grudge Match! isn't a story that comes out of nowhere, it ties directly into an Annual story that, because of the longer lead in time, would have been written months ago, probably before anyone in the UK knew there would be the opportunity for an extra four weeks (it certainly took the American team by surprise as the Next Issue bit at the end of #32 describes the events of #35). This is somewhat explained by the Classics UK book where Furman mentions not necessarily having any idea of a follow up when writing What's in a Name?, it seems likely when he realised the extra month would roughly arrive around the time the Annual was published that connecting the two became the obvious thing to do.

As I've touched upon before, the resulting story feels somewhat annoying in the grander scheme of things. With two weeks (and the aforementioned Annual story) devoted to the Dinobots and old plot threads, it's the throwaway mention of Swoop previously being called Divebomb from two years ago that gets the focus? It really, really should have been the Professor Morris storyline that was wrapped up here. Predacons and even a mention of Swoop's old name could have been involved as well, but by avoiding the big unanswered questions of Centurion's return the whole thing can't help but feel like a missed opportunity. Deciding minor lines from old comics can make the basis for an exciting story now is pure John Barber thinking. 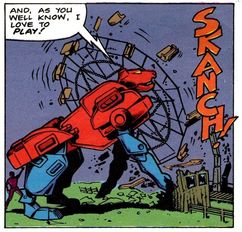 Pussy galore.
But... Outside of the wider context this is huge, huge fun. The opening with the Predacons gate crashing a circus and pissing about scaring (and most likely killing, but that's glossed over) humans is just fantastic, with even the Budianskyesque comedy human reactions being perfectly played. Devoting four out of 11 pages to a mostly irrelevant comedy skit might show this is going to struggle to fill two issues, but it's still nicely done and segways well into the bored Divebomb thinking this is all a bit beneath him and how he wishes his favourite foe was still around.

Those who have read the Annual story will know where this is going, but I think this issue actually works better without that foreknowledge. When we cut to the Ark and see Swoop catching sight of the Decepticon who stole his name on TV there's some mystery over the extra cause of his angst (and who it was that the newer Divebomb later says saved him) that isn't there if you've already experienced What's in a Name? 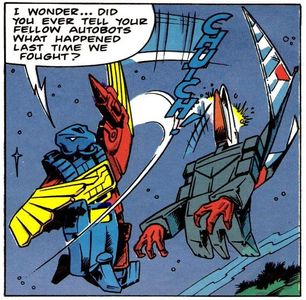 "How dare you say my robot legs are poorly disguised!"
Incidentally, the Annual story fits neatly between panels on Page 10, a very nicely done job on Furman's part.

And yes, the story being focused on Swoop's fears over an event in his past does make it more galling this isn't about Professor Morris.

This leads into Swoop going and finding Divebomb, with a fantastically done aerial combat sequence that not only soars (ha!) visually but has some fantastic character work on the two robots, with Swoop just deeply pissed off whilst Divebomb is just delighted at having his playmate back. This almost loses the Decepticon the fight as he hesitates in killing Swoop because of the fear of the return of boredom in the aftermath, letting the Dinobot get the upper hand. But the tables are turned once more when the rest of the Predacons arrive and, in a lovely touch, piss off both combatants as a result.

Despite not being the story I'd have liked to see at this point, there's a huge amount of fun to be had here and shows that even when not aiming for The Epic Furman is on fine form at this point. In the Classics write up on this story both Furman and James Roberts come over as not being huge fans of the art, but whilst it's not Geoff Senior it's still fine solid Jeff Anderson and that is no bad thing. 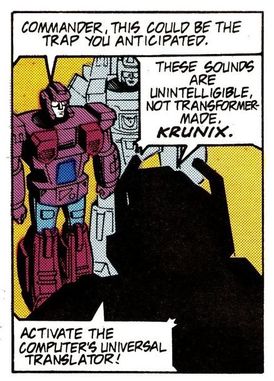 Probably Cyclonus' most memorable non-Furman moment.
Broken Glass! Part 2 sees Zarak's attempts to turn the population against the Autobots take a blow when Gort recovers enough to say Blurr didn't attack him and his fall was an accident. This forces him to take advantage of a tour of the city the Autobots are building to find out the frequency of their space radio so he can call the Decepticons in. This goes as well as you'd expect as Scorponok treats him like a piece of dog crap found on the sole of his show and instantly decides to attack the place Maximus' head is stored even though it's near a city.

Zarak's motivation continues to be odd here, if he genuinely thinks the robots were evil lying warmongers, you have to wonder why he expects their counterparts to be any different.

The main memorable thing about this issue however is that this was where Cyclonus made his American début. Well, in theory anyway, with Springer's art it's possible he's been in every previous panel. However, this is the first time he's named and this creates a problem for the UK team as Springer has drawn a Targetmaster Nebulon instead, even with the poor use of character models across this series that was going to be a bit much to bare a week after the character was in the lead strip. So as to prevent the stream of letters Furman simply renames the character Krunix (which suggests he had Kranix from the film on his mind), and all is well with the world. 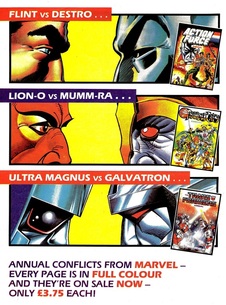 We have another competition this week, though on a smaller scale as it's shoved into the sidebar of Transformation, for new Corgi Adventure game books featuring the Headmasters. Incidentally long time reader Nick (he of Thudercracker Says You're A Wanker fame, he has some new funky art HERE) got in touch to say he was a winner in last week's Annuals competition despite getting one of the answers wrong, suggesting there weren't many kids who were expert enough on all three books to let them pick 100% correct winners.

Grimlock has to deal with another letter, this time from Francis Dodsworth of Cambridge, asking wtf was going on with Centurion. If only this issue had managed to deal with what is likely to be a long run of letters asking the same. More positively, Luke Upchurch of London is the first person to have a letter printed that is in any way positive about stories being concluded in other titles as he thought Ancient Relics! was good enough to justify buying Action Force.

I've not really touched on it for a while, but Robo-Capers ends a story that has run for several weeks about the aliens accidentally bringing a killer robot from the Moon to the Earth as he blows up as a result of hay fever. It's an oddly unseasonal punchline, but expect more of this sort of thing once Combat Colin arrives.

Next week, who saved Swoop?

There's not going to be a full on Christmas quiz this year (mainly because I don't have any prizes), but if I find the time I may put up a just for fun version on my YouTube channel in the next week, so do keep an eye out. 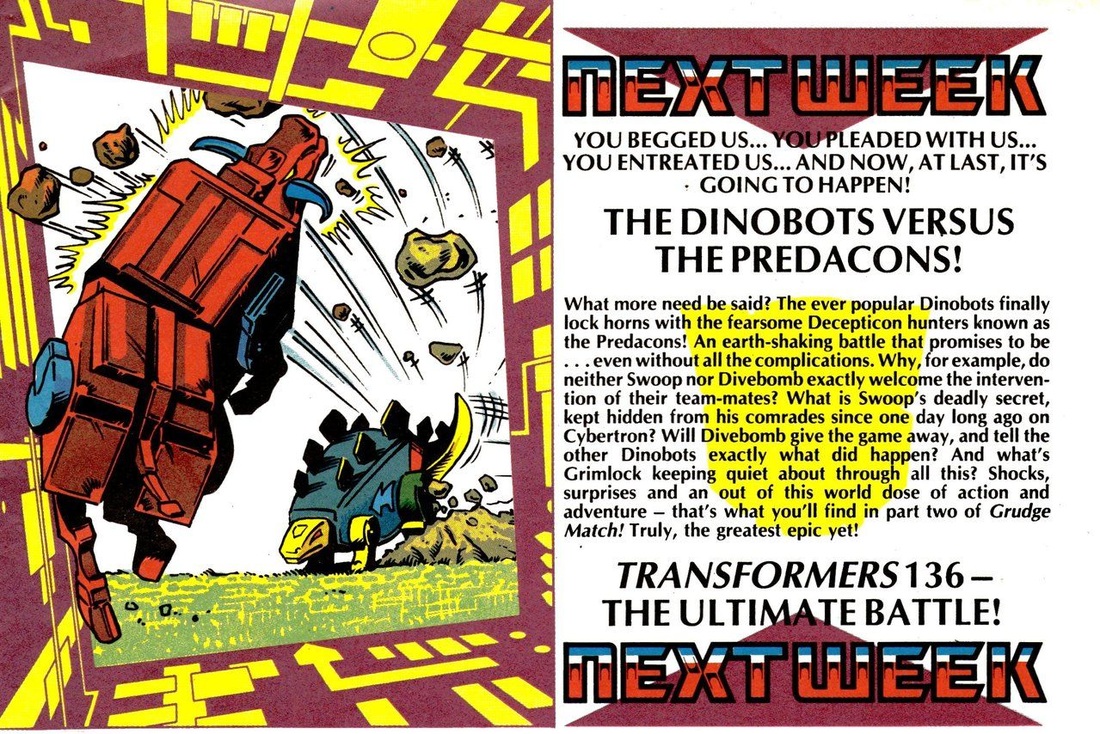