Monday, You Can Fall Apart. 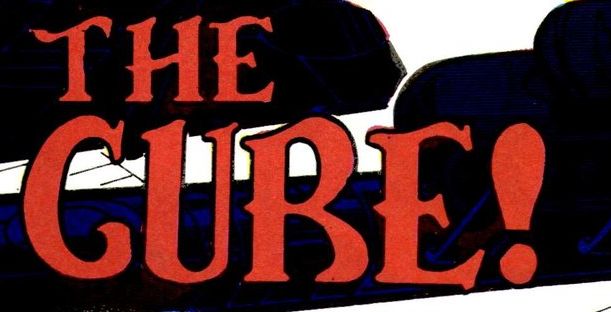 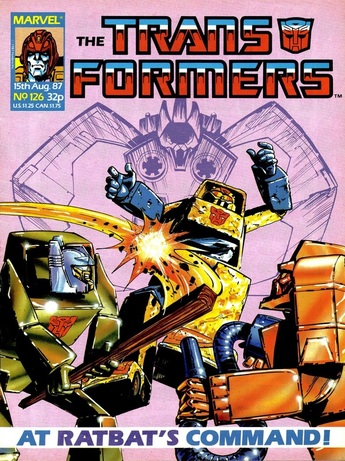 Quit your honkin’ and keep shootin’!

Amongst loyal Transformers readers the end of the first week of August in 1987 must have presented quite a quandary. One the one hand, last week’s exciting issue had ended with the return of Megatron... but the rest is going to be in Action Force, a comic that has otherwise been fairly easy to ignore despite the best efforts of Marvel UK. On the other, the promised adventure in the next issue of Transformers proper looked to be a continuation of the dotty coloured Goldbug story, and those weeks are never quite as good...

Now, if you only had the pocket money for one and your parents weren’t going to be arm twisted into getting you two comics, which would you go for? Following Megatron might seem the obvious choice, but it might mean mucking about with a standing order at the newsagents for a comic you won’t be interested in once the crossover was over. It would be interesting to know which of the two books those who had to make a choice decided on, if you were one of those put in that position do leave a comment (or say if you managed to get your parents to buy you both).

Wait, you all bought Transformers as normal and just read Action Force in the shop up till the point the newsagent shouted “Oi, this aint a bloody library!” didn’t you? No wonder this wasn’t enough to save Action Force.

Of course, Budiansky would have been unaware when writing this that the British version would be effectively in competition with itself, but the opening of this issue feels like he’s coming out swinging with narration boxes positively dripping with testosterone (“They came expecting TROUBLE. They didn’t expect a SLAUGHTER”) that feels as if Uncle Bob is shouting “Come and have a go if you think you’re hard enough!” at Furman.

The reason for this manly manliness is Bob’s first return to the outside surface of Cybertron since the Scrounge storyline, as the Throttlebots (a small note on form here: Despite his toy being one, Goldbug managed not to be a Throttlebot in both the cartoon and comic. Amazingly he still decides to hang out with them almost exclusively in both, and even responds to a “Throttlebots... charge!” order in The Rebirth) try to raid a fuel depot but wind up being captured by a super drone that takes them to Ratbat.

Despite starting a long and noble tradition of no artist managing to tell one Throttlebot from another, this is all good fun and has some nice banter as the characters try to make sure they refer to each other by name within a page. 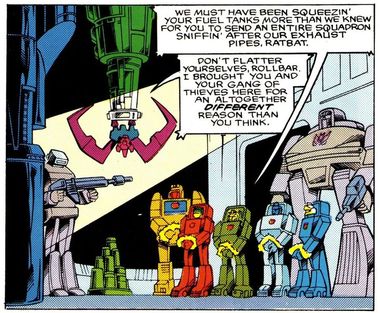 Ratbat in the spotlight.
Ratbat also adds the awesome once again- and look at his prominence looming over the cover, the comic knows he’s the best thing in it- smugly lording it up over his prisoners as he tells them he wants them to go over to Earth to deal with the Scraplets as he can’t afford to risk any more Decepticon lives.

The twist though, is that he doesn’t want the Autobots to save the infected, as he doesn’t believe in the mythical cure. He wants the victims destroyed so as to prevent any chance of the Scraplets spreading. Or else he will destroy the Earth (! This has got to be a bluff on his part as there’s no indications the Decepticons have that sort of power, but our heroes don’t know that).

This sets up the conflict of the issue very nicely- The Throttlebots know at least one Autobot is contaminated thanks to being shown a pitiful SOS from Astrotrain, but they can’t let the planet go BOOM. So we have a nice, natural Autobot Vs. Autobot conflict set up.

However, Blaster isn’t their first concern as, when they arrive on Earth, they find the Transformers in the crater in no state to do anything, and Blitzwing can’t even fly in one comical panel, so they decide to make the tracks showing someone drove away a priority.

Meanwhile, Charlie has to push Goldbug across the desert, which really isn’t too good for his state of mind. Luckily he finally finds both the road and a garage; complete with this story’s comedy human bystanders; Ernie and Jim (“Maybe we got too much sun!”).

Luckily Charlie’s desperate need for a drink gives us the surprisingly early in the story reveal of the titular cure as he spills some on Goldbug: Water kills the Scraplets!

OK, let’s deal with the long standing criticism (that goes all the way back to the first guide to the comic I ever came across on Rob Jung’s page): How can water be something the Transformers have never heard of? Well, that’s strictly not what happens here, all references to the mystery of the cure are vague on whether they actually know the name of it, so it could just as easily be the case they do know of water but it doesn’t exist naturally on Cybertron and thanks to the passage of time they’ve simply lost knowledge of the fact it’s what prevents Scraplets.

Now, considering some of the other science in this story I’m not entirely sure this was Bob’s intent and that he wasn’t being entirely literal and really did mean Transformers didn’t know about water at all (he could well have forgotten a couple of throwaway lines in the very first issue), but the story can still be read so as the conceit more than works. For a deciding vote though, you might want to consider the fact Ratbat’s mysterious cargo will turn out in two weeks to be an evil car wash. 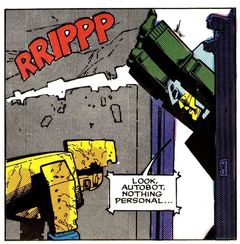 "...but you're not actually a Throttlebot are you?"
Unfortunately Eric and Ernie think Charlie has a touch of sunstroke and won’t let him waste their precious water washing his wreck of a car, and that’s when the Throttlebots turn up. As often seems to be the case when confronted with an action scene, Don Perlin’s art struggles with the brief fight between them and the dying Goldbug, which is a shame as there are some nice ideas in there as the garage is ripped apart to be used as a weapon. Still, the sheer aggressiveness of the Throttlebots (it seems like they’ve taken lessons from Blaster) is entertaining and leads nicely to the cliff-hanger of Charlie deliberately infecting them with Scraplets so they’ll listen to him about the cure.

If you’d have asked me a week ago which I’d prefer more, Ancient Relics! Part 2 or The Cure! Part 1, I’d have said “Duh, the Furman/Senior goodness you fool, what a stupid question to ask!” So I’m mildly surprised the reverse is actually the case, with the short page count of Action Force being mostly given over to exposition Budiansky has the edge in that he can delve right into a fast and fun- if straightforward- story.

The Throttlebots are fairly indistinguishable from one another (including to  Don Perlin), and Senior definitely has the edge on art, but this is Transformers at its most cheesy fun, and pleasingly Charlie is turning into one of the best human guest stars the American series has seen as well. It also has to be said that Blaster being reduced to a non-speaking extra helps. Plus, Ratbat.

There’s yet another food based competition this week as Transformation reveals that readers who send their best joke along with the cover logo of this issue to Curly Wurly (insert your own Peter Kay style comment about how they used to be bigger) has a chance of seeing it published in the comic and winning both a Cadbury’s Curly Wurly Joke Book and five whole pounds.

Grimgrams reveals TV adverts for the 1987 toys have started in earnest as Christopher Johnson from Woodbridge asks about the Targetmasters he’s seen on the telly, which gives Grimlock the perfect excuse to once again plug the forthcoming “Cover to cover Transformers” action. Oddly he also suggests to Thomas Cardwell from Stockbridge (the one from Doctor Who Monthly?!) that the Dinobots were created on Earth, has someone gotten confused over the TV series?

Our new back up, stepping into the place of the cancelled Inhumanoids, is the 1987 Iron Man (hey, want to hear my joke about the just ended back up? “What’s really impressive about Arno Stark? He has 2020 vision!” I thank you), in a surprisingly recent story from the May 1987 cover dated issue 218 of his own title entitled Deep Trouble!

Presumably this was chosen due to being (at least partly) set in England, though the realisation isn’t perfect. It starts with a really odd road sign which I think is meant to suggest the action takes place in East Malden: Twinned with Makokthon, Zambieli”, but the wording is so vague it looks as if the story is happening in some made up East European country.

To follow this, we then get another sign with distances in kilometres, presumably artist David Michelinie remembered those wacky Europeans don’t use miles but didn’t realise the British aren’t that metric.

However, curios aside, this is a nice scene setter as Tony Stark gets warned off his mission to the UK by a KGB broad, before donning his suit and flying the Russian’s into a field (all whilst pretending to be his own bodyguard).

We also get a full page advert for the 1987 Annual, which has now been released. As you’d expect, it makes great play of the having the conclusion of the volcano story in it, but oddly also claims that we’ve all been “Clamouring” for a Swoop/Divebomb fight. Which seems unlikely.

Next week (and interestingly the promo box at the end of this issue uses the American cover re-coloured) the Scraplets reveal their strangest power yet. But on Wednesday we’re back to the comic none of you were buying as Wild Bill comes down to Earth.