They Heard the Hum of our Motors, They Counted the Rotors and Waited for us to Arrive. 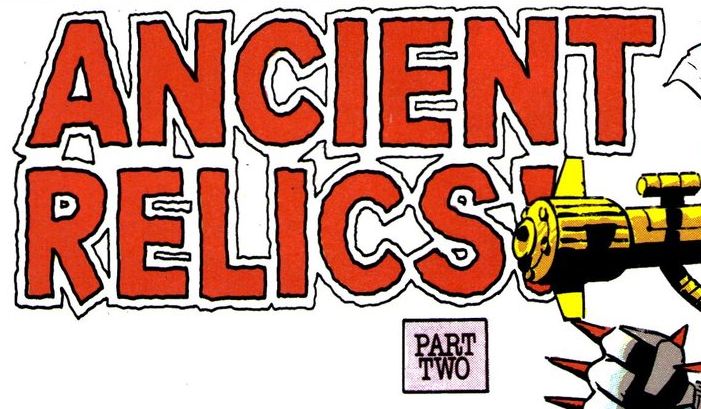 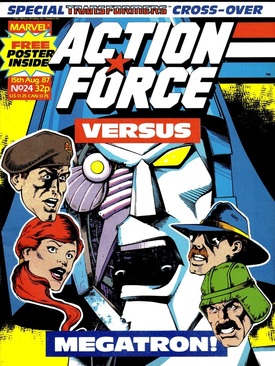 Some days, though it just doesn’t pay to get out of bed.

Welcome to the future. Not that any Transformers fan popping over from their regular home to sample the second part of this crossover would have known that at the time, but the three strip format of the Action Force comic (based around a short original story, part of an American issue and a bit of a random Marvel reprint) is exactly what our own dear comic will become in just under two years, with only the order of the British and American stories (and both being in full colour) being any different in terms of presentation.

Knowing this, it becomes surprisingly hard to read this comic in its proper context. We know the three strip format wasn’t hugely popular when it came to Transformers, and the fact Action Force winds up lasting just the one year suggests it might not have gone over very well with readers here either. Is the comic full of signs and portents of why this was a bad idea? And do we get to see Simon Furman get a trial run of a format he’ll have rather suddenly dumped on him in the early 200’s of the main subject of this site?

This is perhaps rather unfair on poor old Ancient Relics!, especially this instalment as it has a job to do the subsequent three parts don’t have to deal with- providing exposition for readers who only buy Action Force.

So out of a five page story, three pages are given over to recapping the events of the previous week’s Transformers. I haven’t read this crossover in a while and therefore I may be wrong here (the rest of the month will tell), but I suspect the following parts won’t feel the need to be so heavy handed now they have all their regular readers up to speed. Unfortunately, if you have read Transformers (and whilst I fully appreciate the comic taking care of those who don’t, I still suspect the small and shrinking Action Force readership would have had a very high crossover with the older book) the momentum is rather quickly killed off and it winds up feeling like an issue you could actually quite easily skip. 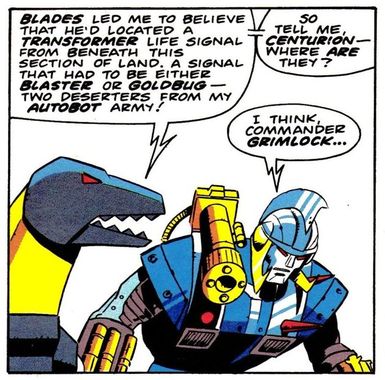 "And will you explain who I am as well?"
The first page of exposition- with Flint’s internal monologue as he flees from the sewers on the grounds that fighting a giant monster in confined conditions is a bad idea- is actually rather neatly handled if nothing else and goes a very long way to making him seem pretty damn awesome even in retreat as there’s a pragmatic common sense to his thoughts that’s hugely appealing.

Unfortunately the second and third pages deal with the Transformers side of the recap, and has Grimlock (arrived in London to fight Goldbug and Blaster) delivering some incredibly cumbersome and out of character speech bubbles that really struggle to explain his relationship with two characters who aren’t going to appear in this story.

Megatron, having blasted to the surface, decides to join in by explaining he’s been brought there by a space bridge despite the fact that the rest of the story (and pretty much all his appearances between now and teaming up with Galvatron) will treat him as far less lucid and with it.

Amusingly, during all this recapping and continuity patching, Centurion is just standing there, talking like a normal robot with no explanation of who he is for new readers, nor of why he’s suddenly acting completely differently for those who do know him.

This is as good a time as any to deal with the Centurion issue: Furman has quite clearly either forgotten about professor Morris or just decided “Sod it” and chose to ignore the back-story when pushing Centurion into the role of disposable sacrificial lamb (spoiler!). The TFWiki page for this story does have a recent quote from Furman where he talks about how he thinks Centurion was still controlled by Morris but that he’d failed to make this very clear.

Now, even accepting this (and it does sound like a retrospective ass pull), the complete abandonment of all the loose threads to do with Morris and his crusade against Triple I is the first real big fumbled ball of Furman’s time as a writer, and ironically enough it happens in a story that sets up the other famous fudged moment when Megatron returns to the American series.

This is hugely frustrating as I’ve said before, because frankly having been a major part of two big storylines (plus a decent supporting role in a third); Morris demanded a better send off. If it came down to a choice between a two part Dinobot story explaining why Divebomb has a name that used to belong to Swoop or one that did something decent to wrap up some actual significant plot threads (either instead of his appearance here or even just following up on rescuing Morris now his Avatar is dead) then I’d gladly pull the plug on the forthcoming Grudge Match.

Or perhaps just made the Volcano storyline that took up such a disproportionate part of the last year shorter and leaner so Morris could reach a satisfying end in the empty gap that would have been created by that. Annoyingly, every UK story that’s minor or just a bit of fluff from now on is going to feel like a wasted opportunity to end Morris’ story, even long after it becomes likely it would ever be revisited.

This actually shows one area where Furman was a poor choice to write ReGeneration One, a series specifically tasked with wrapping up loose ends. Crossing every T and dotting every I is something that has never hugely interested him, Centurion may be one of the more overt examples but there’s no shortage of moments across him body of worth where a plot thread or set up is forgotten for various reasons with a simple shrug of the shoulders. Amongst the most recent Transformers examples: What happened to the Decepticon facsimiles out to take over the American government in IDW? Or EVIL Jazz in the British Movie comic?

He’s very much about writing in the moment and creating a sense of forthcoming doom rather than paying off everything from past issues perfectly. For the most part, certainly in the Marvel era, this works fine but every so often the house of cards falls down and poor old Centurion is one of the big casualties of him getting distracted by new shinny things to play with.

And we’ve not even reached the worst indignities heaped on him in this story. 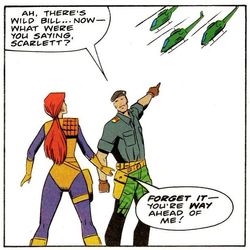 Flint: The Man.
More cheerfully, the second (well just under) half of the issue sees the quality start to swing back round as we get the start of the Megatron/Grimlock fight we’ve been waiting for and some more impressive leadership skills from Flint. Scarlett attempts to offer him tactical advice on how to deal with the giant robots tearing up the docks, but he’s already on the ball and is ordering group and air reinforcements before she can finish speaking. That means he’s not only a top commander, he’s also aware of the short page count and the need to speed things up before page five.

This gives us our rather hasty cliff-hanger, as Wild Bill (who, for Action Force, is of course from Hull) is blasted out of the sky by Megatron and starts to crash.

Overall, this is a rather poor bridging issue that could indeed be quite easily skipped. However, Geoff Senior still does good work on art (the only sign of it being a rush job is the backgrounds have a tendency to be empty) and with the needed extra exposition out of the way let’s hope the story picks up again next week. 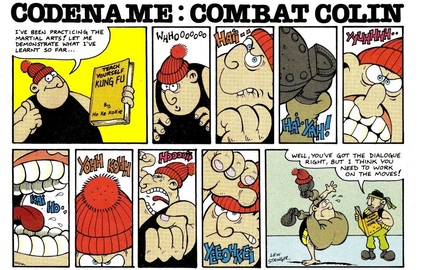 Our first Combat Colin strip.
The rest of the comic (edited by Richard Starkings for the record) is familiar yet strangely different. Mission Control is the equivalent of Transformation, but the main text of the page is simply given over to a potted biography of Major Bludd that seems to be mainly concerned with filling in readers on details they’ll need (from issues Action Force hasn’t reprinted?) for the American story. The contents are down the sidebar, interestingly this opens with a recap of what Action Force are, a detail that Transformers wouldn’t have needed six months into its run.

Sadly it seems synching up the crossover so it would start in Action Force alongside the first part of an American story seems to have been impossible, so whilst the third and final part of The Mountain represents a perfectly serviceable example of Hama’s writing- and has a fantastic moment of Spirit blowing up a bear- it’s not really a great place for new readers to start and the ending (where one dead Fred is replaced by another) is going to be especially confusing.

Mail Call!; the letter’s page; is roughly in the same style as Grimgrams but without the pretence of the letters being answered by a character. This does take some of the fun out of it and removes any pretext for the host to be a bit of a dick (Grimlock could get away with blowing off Christopher Missenden from Herts’ question about Lady Jaye’s gun with “It goers bang when you pull the trigger”, an actual human member of the Marvel team comes over as needlessly mean) but it’s generally a solid read.

Much as with the American Joe story, we have the misfortune of joining Master of Kung Fu! part way through an adventure, though to add to the confusion the title has been changed from the original A Gulf of Lions so as to present it as Part 6 of The Crystal Connection, creating the illusion of an even longer story.

Whatever the title, I’ve no idea what is actually going on here (though I suspect at least one regular contributor to the comments knows more that I), but it seems to involve Bruce Lee punching some soldiers before falling down a hole.

The poster promised by the cover is a technical diagram of the Dragonfly helicopter that may well turn out to be Wild Bill’s coffin, but let’s face it, for Transformers fans the most exciting thing about the packaging of the issue is the Combat Colin strip. The Action Force equivalent of Robo Capers, also by Lew Stringer, it will find a home in Transformers in the next year and will be by far and away the best thing to come out of the merger with Action Force. This strip, likely the first many Transformers fans would have seen, is a fairly basic silly sight gag about Colin being useless at kung fu, but it’s rather sweet and sets us down a road that will lead to great things.

On Friday I’ll be back to Transformers and Goldbug’s desperate attempts to not be bitch slapped by Blaster, before the less exposition heavy third part of this story arrives in a week’s time. 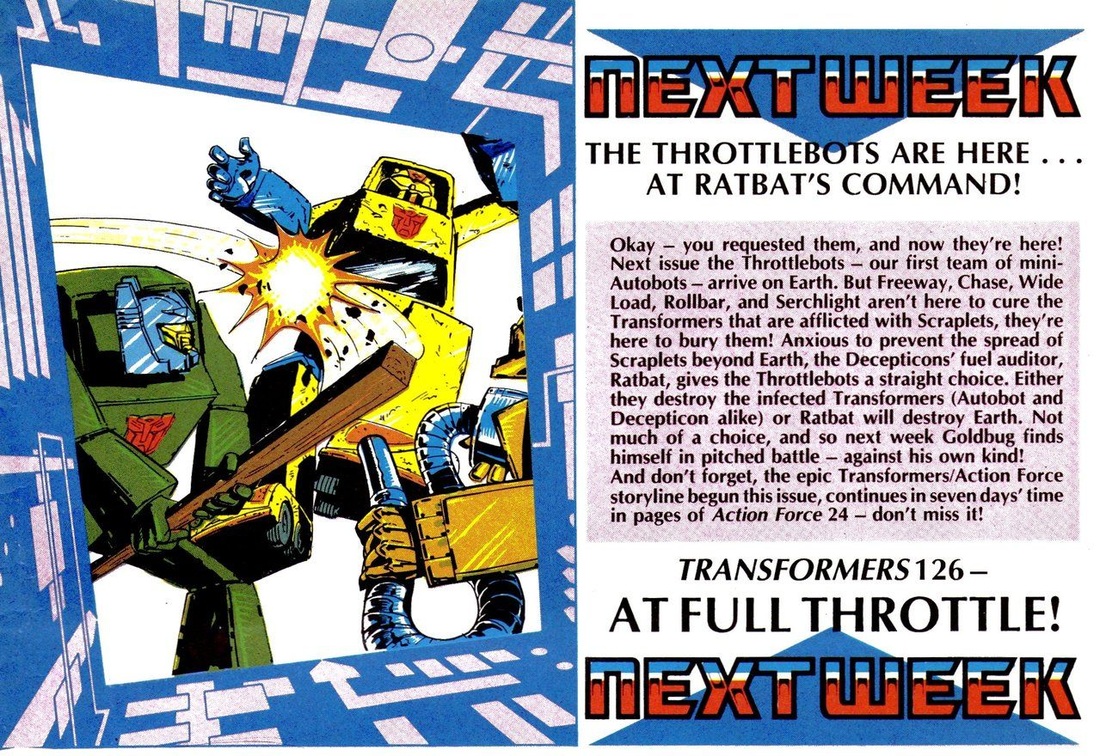