Tonight, I'm Falling Away From You. 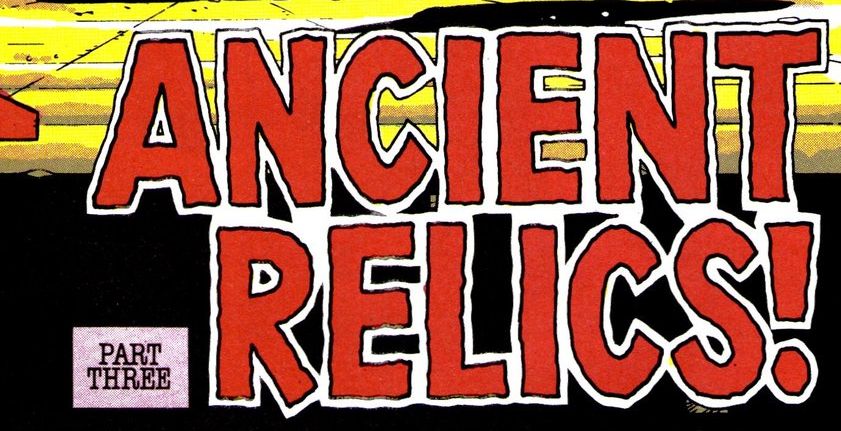 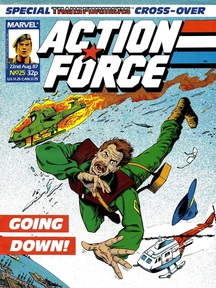 
As I predicted last week, with both of the people who only read Action Force brought up to speed the recap is a much more manageable one page this issue. It also consists of what has to be the one and only example of a lengthy inner monologue being given to a combiner limb in the Marvel comic as Blades gets to think over what happened to him as he crawls out of the tunnels.

This is notable because, whilst the cartoon would do more with them (especially Swindle and the awesome voiced First Aid) the poor old limbs are pretty much going to be completely ignored by the comic, with the next time one gets any focus being during the black and white era when Wildrider’s paranoia brings him to a messy end. 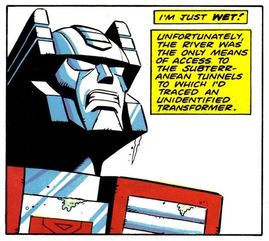 "Internal narration, beat that Groove!"
Blades also gets to save Wild Bill from certain death, with the pilot rather wonderfully coming over as completely unphased by giant alien robots because, hey, he’s from Hull.

Flint does briefly think Bill has been killed (which is fair enough, jumping out of your own exploding helicopter and grabbing another passing chopper without being cut to death by its blades is mildly unlikely) and gives an enraged speech to Scarlett about how Wild Bill wasn’t just “Another soldier for the Action Force memorial!”, but a friend. I really wish after this there was a panel cutting to Bazooka, Airtight and Barbecue looking sad because they know deep down in their souls that Flint wouldn’t have given a toss if one of them had died.

Flint is pissed off enough to order Heavy Metal (who isn’t a friend) to destroy half the dockland in order to get some Maulers into position to attack Megatron. It’s lucky the area was under redevelopment at this time wasn’t it? Having spent the past weekend binging on 24: Live Another Day, where Jack Bauer manages to destroy most of London whilst saving it, it’s impossible for me to read Flint without hearing him being played by Kiefer Sutherland. 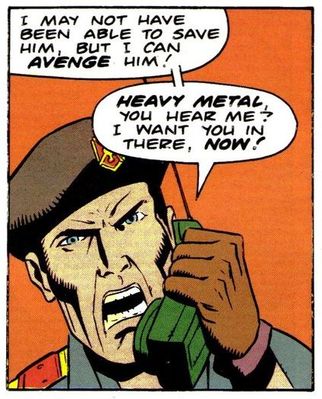 "Damnit!"
This attack actually saves Grimlock who was about to eat fusion cannon, and it’s interesting that the fight between him and Megatron ends so decisively so quickly. This is in keeping with their previous combats (where with the Dinobots help he still never got much leverage over Megs even when the Decepticon was alone), but it’s nice to see Furman not just giving his favourite character the advantage. Especially as Megatron’s wounds could be quite neatly used as an excuse for him being whupped.

The short length means we’re then right into the cliff-hanger as Blades (with his bona fides now established) warns Action Force all they’re doing is pissing Megatron off...

With the cumbersome set up out of the way this third part is much better and a lot more fun than the second, with some nice moments for Flint, Grimlock and Blades and the ever lovely Senior art pumping things up nicely.

However, the page count still leaves things feeling fairly inessential for such a big story moment as Megatron’s return, with the only stakes being whether some future yuppie flats will wind up being demolished by Action Force or not. Based on the comments on Friday’s entry, kids of the 1980’s who grew up in days before widespread videos and Wikipedia recaps were actually perfectly fine with missing the end of a long running story and never knowing what happened (whether or not there was an actual last episode of Dungeons and Dragons seems to have kept a couple of people awake at night though. There wasn’t), I think any who hadn’t bothered to come over to Action Force who happened to glance at this issue in the newsagents wouldn’t have felt they were missing much. 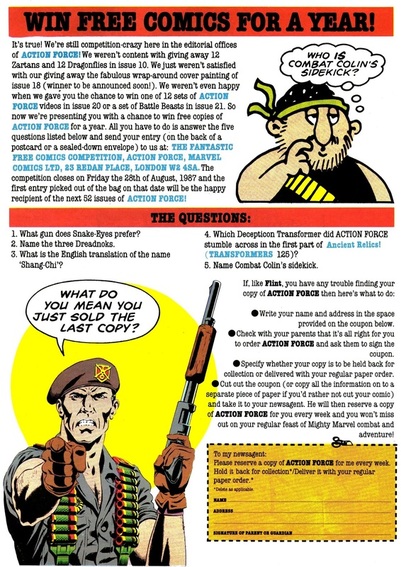 Good luck with that.
The American reprint is from issue 33 of A Real American Hero, and picks up from the end of last week as Spirit (alongside Blowtorch and Ripcord) tries to get some traditional medicine in a shopping mall and stumbles across the new Fred, resulting in a chase.

The main things to note are the amazing site of Snake Eyes in a hospital bed in full ninja costume, a deeply unfunny comedy scene of a general preparing to open the Joe’s...err... Forcies new secret headquarters (and to tangent: The gag about how the opening of the original pit had done without catering because none of the army chefs had clearance reminds me of a similarly daft moment in Jeffrey Deaver’s Bond novel, Carte Blanche, where it turns out MI6 has no cleaners for the same reason. Even top secret facilities need support staff, the head of the secret service doesn’t Hoover their own carpet and a large secret army base will still have a canteen) and Hama showing his right wing leanings as Spirit declares Americans have the right to smoke wherever they want even if it is poison. Try slipping that in a kid’s comic now.

There’s also a sequence that works better for Action Force than it would have in G.I. Joe, where the Baroness (plotting with Major Bludd to have a Cobra Scout shoot Cobra Commander) asks Destro for a sign of trust, so he shows her his face and she faints. Apparently in the original Action Force stories he’s hideously disfigured so this reaction makes sense. However, in his first American appearance it was actually established his mask was new and the Baroness knew what he looked like previously (he also turns out to be a handsome devil later on), her shock here is a retcon.

There’s an exciting competition this week, giving you the chance to win an entire year’s worth of Action Force (52 issues), if Marvel get their skates on and sort out the winner really quickly the lucky kid might get close to half of that before the book ends.

Interestingly, Mission Control reveals that next week we’ll be getting a rerun of the Captain Ric competition from a couple of Transformers issues ago; did someone at Marvel have shares in Ricicles?

Mail Call has received some letters addressed to specific heroes and villains, who take turns in answering, meaning it feels more like a traditional Transformers letters page this week. However, it has to be said there’s not much difference in how Flint, Cobra Commander and Quick Kick respond to letters. Richard Davidson from Humberside officially declares new Action Force to be better than Battle Action Force, possibly the only letter they ever got to hold that opinion.

To round things off we have Master of Kung-Fu (still no idea what’s going on, he fights some giant cats) and a full page given over to Combat Colin continuing to fail at learning martial arts. We also come across our first, but I suspect by no means least, Targetmasters advert.


Next week sees Megatron unleashed, but back on Friday (or possibly Thursday, with London Film and Comic Con this weekend my schedule may be doing the wacky), it’s the second part of The Cure! 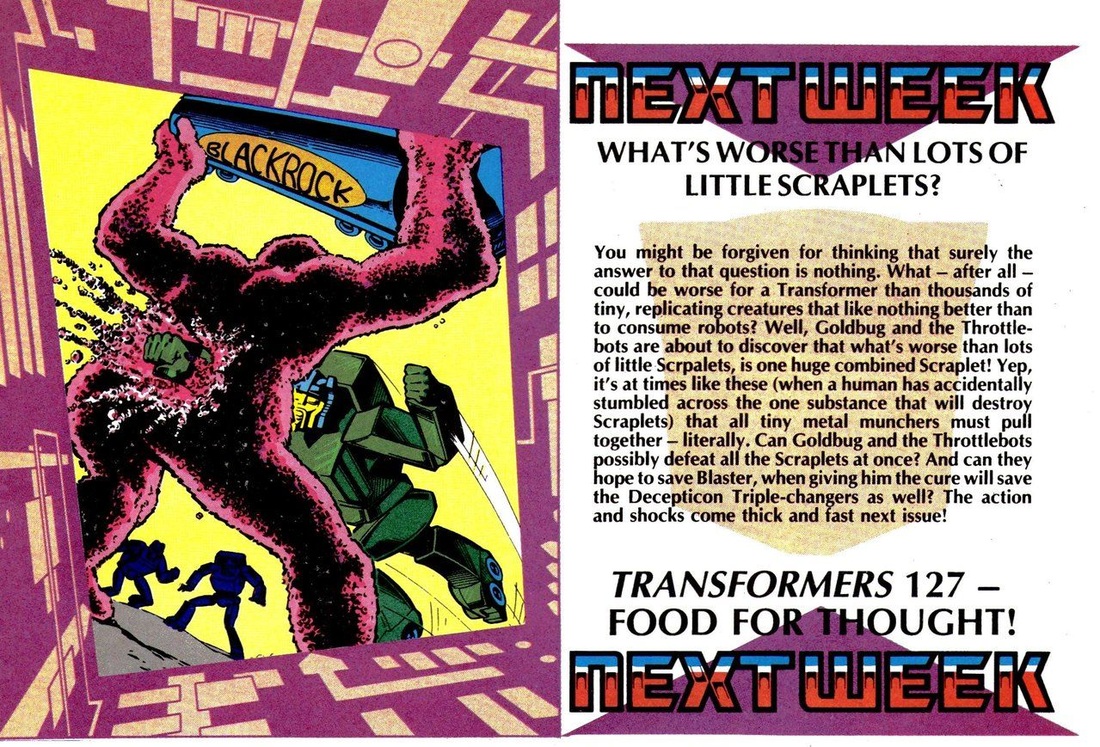