Dance into the Fire. 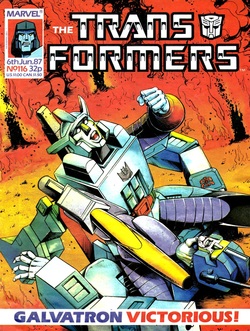 
Fool! Have you learnt so little from our previous battles?


My usual process when writing this blog is to start thinking about the following Friday's entry on the Monday before, mainly to go over my memories of whatever story is coming up and what I might say about it prior to rereading it on the Thursday morning.

This week I was worried about what I might actually say as this is a very slight story that covers a lot of ground I've talked about before. In particular we get a massive issue long fight between Galvatron and Ultra Magnus drawn by Geoff Senior. It's a glorious fight to be sure with some stunning visuals- in particular the sight of Galvatron cracking Magnus' optics is harrowing- but we've been here before, and this is arguably the first sign of Furman at least slightly resting on his laurels by simply repeating something that has worked for him before.

Now, this is understandable, and no author on an ongoing series has ever gone "Let's not build on that thing people liked!", but it's part of a bigger problem with this story. This is the first of at least three Galvatron/Magnus fights across this storyline and even though having one in the regular comic and one in the Annual story that will wrap everything up makes sense, that's still one too many. 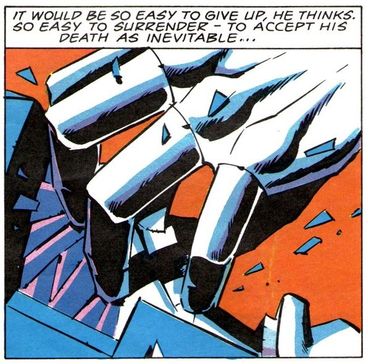 Geoff Senior: Making things awesome since 1985.
The entire purpose of this fight is that the defeat of Magnus allows Galvatron to drag him to his volcano base. That could have been achieved just as well with the Decepticon simply using the element of surprise (and emerging from a forest fire is a pretty surprising thing to do) to quickly overpower Magnus and drag him to the lair, thus skipping this entire issue, saving the big Magnus/Galvatron rematch proper for when it would matter most in the story.

This would have also avoided two problems, the first being that Magnus comes far too close to winning outright considering how much his sense of inadequacy against Galvatron is going to be a thing going forward, in retrospect it feels like Furman has tipped his hand to early and there will be some back peddling on this as the epic time travel story arc goes on.

The second is the sheer stupidity of the fact that Magnus is only defeated because he spends longer wondering if he'll be able to save Cindy (I honestly can't remember if her friends are ever mentioned again) from the forest fire if he took the time to kill Galvatron than it would take to just kill Galvatron.

Other than the fight we only get a silly but fun gag between two park rangers about needing a light and Cindy running through the woods weeping over the fate of Ultra Magnus in a completely ineffectual way. After a page of that a time displacement storm depositing Rodimus, Kup and Blurr in front of her striking the most Geoff Senior of square jawed poses for the cliff-hanger is something of a relief as it means he might have another homicidal moment and stomp on her.

And my thought on Monday was that this would be all I'd be able to write on this story, which at least would make for an easy week for me. But luckily the sight of Galvatron's secret volcano base (though how no one has noticed it before when it can clearly be seen for miles is a mystery) saw my ever rusty brain make some connections that hadn't occurred to it before. Because the entire set up is of course a homage to Blofeld's secret volcano base in the film of You Only Live Twice. 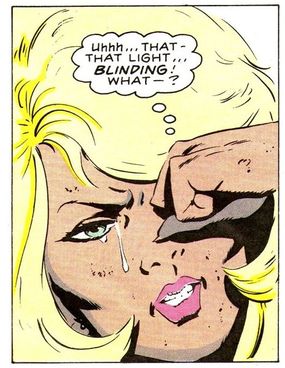 "JAAAAAAAAAAAAAAAAAMES!"
So this becomes as good a place as any to talk about Furman and Bond. It's nowhere near as prevalent in his Marvel and Dreamwave work, but clearly at some point immediately prior to 2005 he went on a massive Bond binge as the IDW stories he wrote are packed full of references, homage’s and outright steals from the books and films. These range from the subtle- a facsimile construct being called Markham after the author of Colonel Sun (which was neat as Robert Markham was as unreal as his namesake, in reality being Kingsley Amis. Of course, the FC was hanging around with a Fleming to emphasise the point) - to the on the nose such as Agent Red quoting the preface to Goldfinger complete with citation.

In terms of relevance to this story, from here on in we're into a direct homage to the then most recent Bond film A View to a Kill, in which insane Max Zorin is out to destroy a large chunk of the American west coast by causing geological disruptions that will create massive earthquakes. As we'll see, this is a plan on a much larger scale (Zorin only wanted to take out Silicone Valley, not to become God), but it's a clear influence and tellingly Galvatron's bigger version is also very similar to the plot the evil Dr. Noah will come up with in Star Trek: Deep Space Nine's own Bond send up nine years later.

It's within this context that the character of Cindy actually makes sense; she's based on Stacy Sutton, the idiotic blonde geologist from that film and works as part of the overall pastiche. Or at least would if not for her going on to feature in a future story, even in the middle of their 80's slump EON knew better than to make Tanya Roberts a recurring character. Still, at least Ultra Magnus (who will shift between being Roger Moore and his old man heroics and Grace Jones and her explosive self sacrifice as the story goes on) won't be baking a quiche for her.

There's also the worrying possibility that the name Cindy is a terrible pun, combining the film character with the word "Cinder", reflecting the fact Galvatron's plan to cause masive earthquakes is based around a volcano rather than flooding as Zorin's was.

Or is that a reach?

Magnus' cracked eyes could be meant to reflect Sir Roger's wrinkly old face in the film as well.

OK, that is a reach.

It might seem odd to homage A View to a Kill as it's widely regarded as a terrible film, but Furman, like me, is clearly a fan (what's not to love about a major Hollywood action film headlining a group of British pensioners? Plus Bond fights Big Ron from EastEnders!) as in the IDW comics he had Scorponok flying about in a giant blimp in a way that only just stopped short of having him hold up a sign saying "I am played by Christopher Walken".

Which, in a thought which has just this very second occurred to me, would also explain the deeply silly first name IDW gave to his Neubulan partner. Mo Zarek is as close to Max Zorin as you could get without the notoriously litigious EON throwing a lawsuit at you.

That interesting diversion aside though, the only real thing that stands out here is Senior's art, which basically covers a multitude of sins and means that as little as it advances the plot it still works on an entertaining surface level despite my moaning.

Transformation tactfully acknowledges the pacing problems by assuring readers at least some of the disparate Rodimus/Magnus/Death's Head plots will be meeting this week, though it doesn't mention that this won't happen till the last page. The sidebar also pimps out the newest Summer Special, collecting the Wrath of... two parter and welcomes Dan Reed to the team. Ironically as his next work for the book will create all sorts of problems we'll be talking about in three weeks.

On the letters page Grimlock uses the excuse of a question about the Predacons from Jonathan Mercer of Cardiff in order to pimp out their presence in this year's Annual, whilst also teasing that there might be a fight between the Decepticon hunters and the Dinobots forthcoming in the weekly.

Interestingly, Grimlock also claims we'll be meeting the Throttlebots in issue 125, suggesting the final placement of the Action Force crossover hadn't been decided on at this point, which is worrying for a major event only just over two months away. Considering it would have made more sense to run the crossover after the conclusion of Budiansky's Scraplet story, I would guess it got pulled forward two weeks for reasons possibly related to whatever problems the Action Force comic the rest of the story was going to run in was having at the time.

AtoZ covers Bombshell and Bonecrusher and shows the creative team are as unsure of what year to refer to the hardbacks by as the rest of us as the entry on Bombshell covers all bases by crediting his first appearance as being in the Transformers Annual 1985/86.

Inhumanoids sees Earth Corps totally fail in their mission to stop the biggest and most evil Inhumanoid escape from his prison (guarded by what look suspiciously like Rock Lords) at the Earth's core, mainly because they're working harder on nonsensical puns. "You know what they say, Slattery will get you everywhere!" What?

The Next Issue box promises the plot will actually start next week, let us hope so. As Auto Assembly is next weekend the exciting write up for issue 117 will be going up on Thursday. Sadly I won't be travelling by mink lined submarine,  but if any of you attending the convention spot me do come over and say hello, I'm not as scary as Grace Jones. 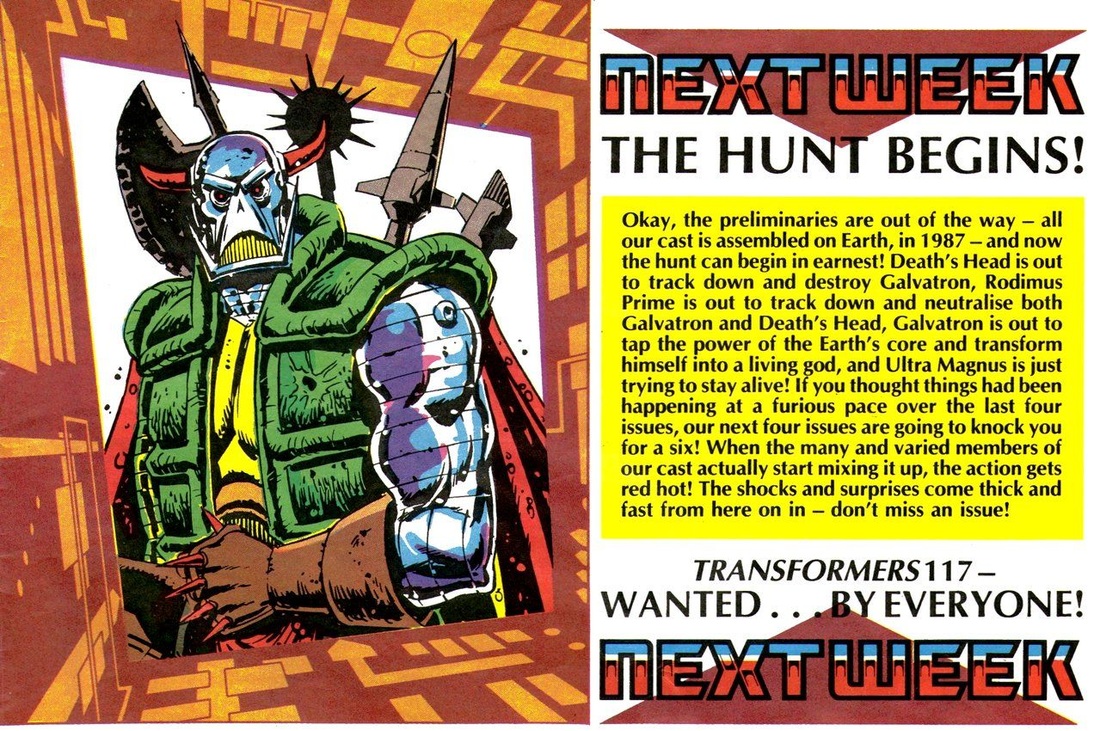