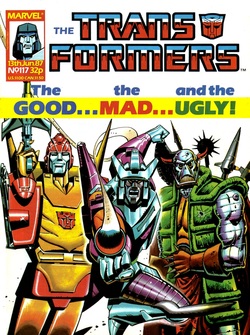 It’s a trick-a trick...it must be! Or an imposter...whatever you are, you can’t stop me, none of you can!


First up, my good friend Goof has asked that I mention him in this week’s entry to give his otherwise empty life some meaning. So here’s to you Goof, and your fine head of hair and 100% heterosexual biker jacket.

No one else should ask for that though, I am not making all your dreams come true like some sort of Jimmy Savile.

Back in 1987 we catch up with Death’s Head after his two week gap. What’s interesting is his travels are covered in a simple narration box from his log. Now, it would be fair to say that this is a lesser Marvel story that has some big pacing issues, but just compare that to ReGeneration One (a series I have been reminded of this week thanks to my other friend Blackjack reviewing the whole run HERE), where during the time Galvatron is travelling to Cybertron on the Ark the comic will cut back to him at least once an issue even though he’d just be standing there doing absolutely nothing that advanced his plot in any way.

It’s indicative of the problems of that book (and arguably the struggles of Furman to adapt to modern comic writing in general) that even though there’s clearly been a need to make some time here there was no attempt to pad out the last two issues by just having a page show Death’s Head walking through the woods, 1987 Furman wouldn’t piss about like that in a way his 21st century counterpart had no issues with. One brief speech is enough to cover events of no interest.

It is however, somewhat odd to think Death’s Head has been walking all over America (going from Oregon, to Wyoming and finally turning up at the Florida Keys in his search for the current Decepticon base), even for a giant robot that must have taken some time and required some never hinted at stealth skills so as to go unnoticed. 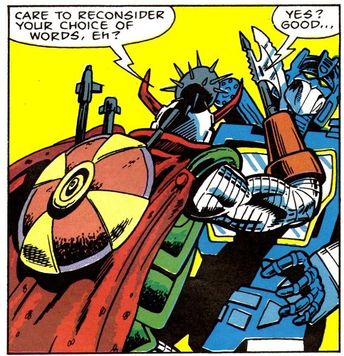 A pain in the neck, yes?
His actions in going to the Decepticon base could also be seen as a form of padding as he picks a fight with Soundwave in order to find out where Galvatron is. On the surface this is an entirely standalone sequence despite the tokenistic justification, and it suffers from inflicting the Worf factor on poor old Soundwave, having him getting beaten up just to show how powerful the new enemy is.

However, there’s something more important to the overall story going on here, as Furman is attempting to repeat a trick that succeeded extremely well in Target: 2006. Death’s Head and Galvatron and heading towards an inevitable fight with each other, just as Magnus and Galvatron where there, circling around each other at a distance to build up the tension and excitement until the moment comes.

However, in Target: 2006 Furman could delay Magnus and Galvatron actually doing anything until they came face to face. Other characters talk of their powers, and they have some very small action moments, but generally what made the sense of anticipation so great was that big issue long combat being the first real fight either had been in.

That’s not a trick that can be repeated here as we’ve seen Galvatron fight a lot now, so if Furman’s going to build up Death’s Head as a worthy foe he needs to be seen to hold his own against equally worthy foes in fisticuffs. His combat against Cyclonus and Scourge was part of that, and his actions against Soundwave and Laserbeak here solidify the idea in the reader’s mind: This is someone who can defeat the greatest Decepticons, he is more than a match for Galvatron and this is going to be epic.

What is perhaps odd is there’s no real sense of anticipation being created for a Rodimus/Galvatron fight, the Autobot leader feels more like a party pooper out to stop everyone’s fun, which is likely a very big sign of how much Furman preferred his new creation to the titular characters at this point.

The fight itself is very well done, with Soundwave compensating for his ass whipping with a couple of nice character moments (using his mind reading powers on Death’s Head), and the script plays to Will Simpson’s strengths by having some nice spiky moments as the Freelancer using a fragmentation grenade on poor old  Laserbeak.

Back at the volcano things are less interesting as Rodimus has to recap the story so far to an annoying and teary Cindy (who admittedly does get one good gag in with her “You lost me when you told me your name was Rodimus Prime!” line) that once again shows the splitting of this story into linked two parters really is killing any momentum for this arc. 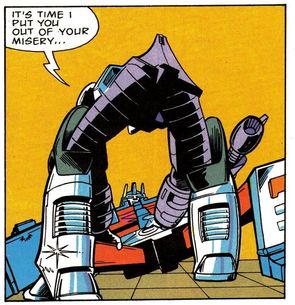 Sexy bum.
Ultra Magnus is also getting exposition, but at least it’s new exposition as he has Galvatron explain how he plans to channel the power of the next staged eruption into his own body... somehow in order to make himself akin to a God... somehow. It’s not the best evil plot we’ve had thus far.

Things do pick up again as the issue ends with Rodimus instigating his sophisticated and well thought out “Run up the side of the volcano shouting at Galvatron” plot (I hope you like it, we’ll be seeing it again) resulting in the Decepticon having a mini-panic attack over what seems to be another Rodimus apparition, before hilariously just knocking out Kup and Blurr by throwing Ultra Magnus at them.

It then seems the cliff-hanger is going to be Rodimus and Galvatron facing off against each other ready to rumble... But of course, that’s not what this story has been building up to so Death’s Head arrives instead demanding that he’s going to kill Galvatron, partly because of the bounty, partly because he’s the author’s new darling.

This improves over the last couple of issues by having a solid opening and decent cliff-hanger, but the middle still feels drawn out and, again, it’s hard to escape the feeling this could have been better with less issues.

One important thing to note is this is Will Simpson’s last “Regular” issue, he’s still got two stories in the next Annual (written and drawn before this thanks to schedules) and a Hasbro mandated two parter that likely had a longer development time so as to meet their needs, but this effectively ends the period where you could guarantee he would, at the very least, be drawing every third original British issue. I’ll talk more about his overall contribution when we get to his actual last issue, but from here on in Dan Reed is filling his shoes. It’s not a bad issue to bow out as a regular on, as noted the Soundwave fight is especially well done.

However, as hinted at by the character’s brief appearance in the Simpson drawn second half of Wanted: Galvatron-Dead or Alive!, his boogly eyed Death’s Head just looks odd. But then, this may well be the single most Geoff Senior-ey character in the history of mankind so it’s not surprising those with a similar clean square jawed style like Lee Sullivan do better with it than the more gangly and lanky artists like Simpson and (as we’ll see) Reed. 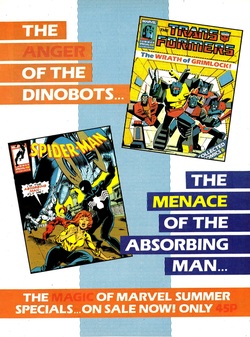 Special Stuff.
Transformation is keen to keep up the assurances from last week that the plot starts here, but the claim “The gang’s all here!” is a bit rich as we’re still waiting for Wreck-Gar to turn up. Speaking of which, Transformation is also trying to get us excited about meeting a new version of... a familiar face next week.

On the letters page, Grimlock has no idea who these Gobots that Aaron Billingham from Northampton mentions are, and is clearly getting exasperated at having yet another letter (this time from Mark Littlefield of Minehead) asking how Optimus can die in 1987 and 2006. Interestingly though, this is the first letter to ask about what happened to the Matrix, something Budiansky seems to have completely forgotten about at this point.

Luckily one Optimus Prime from Doncaster writes in to assure everyone he’s alive and well, though Grimlock thinks he shouldn’t rush back.

We also get an advert for this summer’s Collected Comics, though compared to previous years the picking are rather slim, other than the Wrath of Grimlock book there’s only a Spider-Man special (with him still in his black costume) to go with it. Wither the Get-Along Gang?

AtoZ covers Brawl and Brawn, and I’ve never noticed before how comically oversized Brawn’s head is on his character model, the toy head art from way back when in The Enemy Within! actually looked better.

I’m increasingly loosing the will to live over Inhumanoids, with this week’s instalment only really being noticeable because Sandra (or “The Girl One”) has some ridiculously large breasts built into her body armour.

Robo-Capers stands out this week for its gag about the most terrifying robot ever being Dennis the Dentist, nicely topical to my own life as my Sister in Law this week has been turned into the human gerbil due to RAF dentists being notoriously awful (the emergency dentist she’s had to see whilst on holiday in Vietnam is better than the one she gets back on her base camp).

With that done, I’m off to pack for Auto Assembly 2014. I have to work out how to fit James Roberts in my suitcase for the return trip. 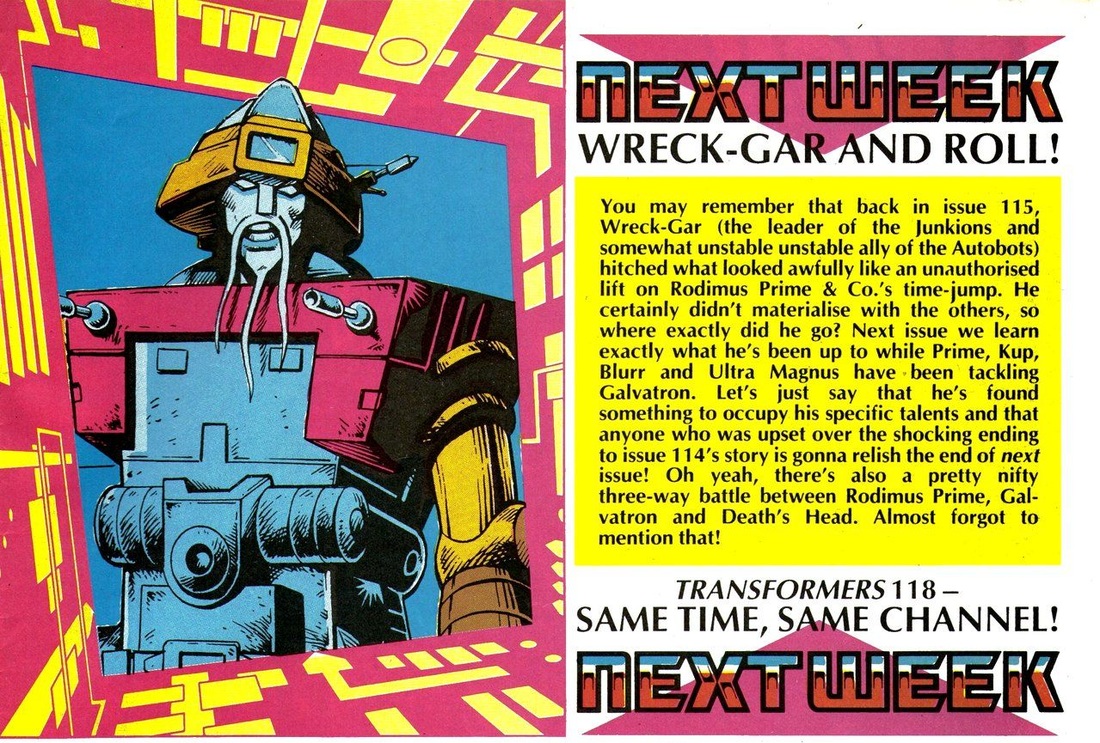