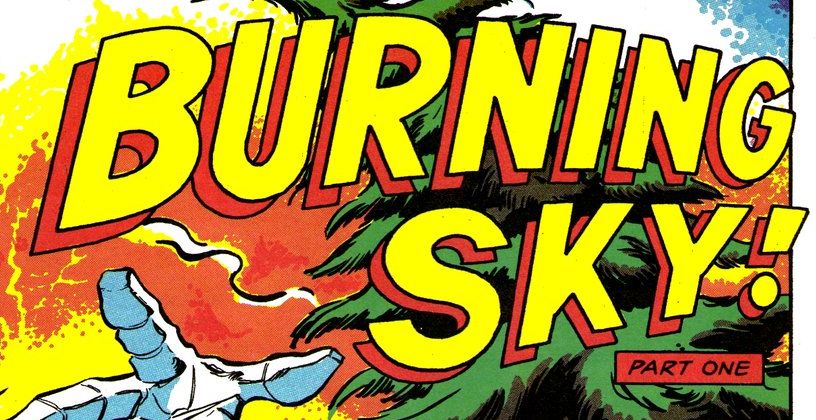 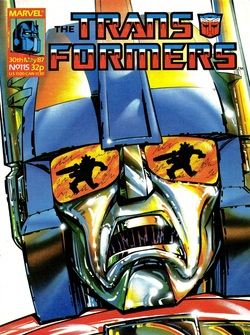 
Oh my Lord! If this is our "Helping hand", we're in bigger trouble than I thought!


There's one thing that instantly stands out about this week's issue and that's the arrival of Dan Reed on art. After they briefly crossover on this story he'll be basically replacing Will Simpson on the regular roster of artists, and is by far and away the most divisive of those who did any substantial work on the series, with people either hating his stuff or finding the bendy wibbly wobbly style he adopted charming. He's basically the Livio Ramondelli of his day.

Like Livio, I rather enjoy Reed's stuff, I wouldn't want it all the time but it makes for a nice stylistic change on a semi regular basis. However, I can more than see why he turns so many people off (including, it would seem, Furman based on various comments over the years), his characters often lack weight and his very first page here features a wavy Ultra Magnus who looks like he might blow over in a stiff breeze.

What's interesting is how in interviews Dan Reed has talked about the great deal of freedom he was given on the book, continuing to get regular work despite insisting he ink his own art and using the fact he was based in Paris as an excuse to deliver his art as late as possible so as to forestall changes.

It seems either Furman was fonder of his style at the time than he is in retrospect and was willing to indulge Reed's idiosyncrasies, or pragmatism was a factor and the book was having trouble attracting new artists to replace those being lost by natural erosion.

Beyond the art, this issue hits on a problem with splitting up a long story into linked two parters, in that we're back on page one with the need to provide a fresh set of exposition and scene setting. Coming off the back of two issues that have done the same it can't help but feel like treading water, especially as there's no major new characters to introduce as was the case in the first act.

If it does feel as if we've gone into reverse gear on the pacing, the sedate opening to this issue is at least charming. Ultra Magnus is on Earth, 1987, and is taking a most lackadaisical approach to his hunt for the Ark as he soaks up the countryside and peaceful night sky in complete bliss after four million years of nonstop war.

It's an excellent piece of scene setting, even if showing Magnus so utterly at peace before putting him through the ringer once more is a somewhat manipulative bit of writing. From a 2014 perspective it's also amusing to think that the current IDW Magnus would be having kittens at the sight of his Marvel counterpart chillaxing with such gay abandon. 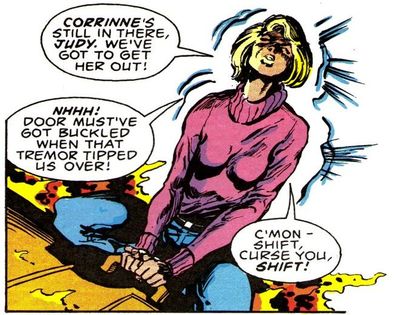 Don't bother remembering their names.
Magnus' vacation is interrupted by an earthquake (that, amongst other things establishes Reed can't draw robots falling over), which leads him to a group of female geologists trapped in one of those giant camper vans only Americans drive.

Two of the geologists don't in any way shape or form matter, but the third, Cindy, will go onto be an exposition tool and a deeply unlikely love interest for Ultra Magnus. She's also very much in the perky blonde tradition Budiansky has established on the American book (and Reed is clearly better at breasts than robots), but is otherwise an almost completely disinteresting character with none of the spark that Furman's previous attempt at a lady supporting character, Joy Meadows, possessed.

Incidentally, it might be worth mentioning that I won’t be touching on the whole misogamy issue raised by the Mairghread Scott interview (and the back and forth responses to it) earlier in the year at this point because there’s a more appropriate story coming up around which a discussion of Furman’s treatment of his female characters can be better structured.

Cindy does provoke one nice moment when her casual mention of a volcano triggers an Impactor flashback in Magnus (which Reed does rather nicely as a reflection in his cab window), showing that his despite the catharsis offered by his team up with Optimus, the Autobot is still not over the guilt he feels at failing on that mission and is likely using his holiday to run away from that as much as the war as a whole.

The real highlight of the issue isn't in the present (or as it is now, our past) but the future (which is now also our past), as one of the expertly done smooth transitions Furman toyed with during the Prime on Cybertron arc is used to take us to 2007. 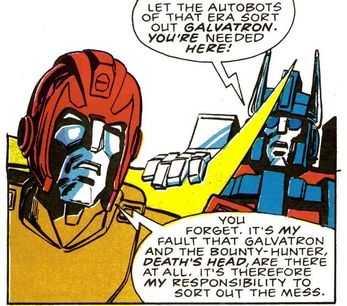 "But... you are the Autobot of that era!"
On the surface this is a nice gag of future Ultra Magnus pleading with Rodimus not to go back to the past even though those of us reading now know that past Magnus is now almost certainly going to need help. However, as with the two Bumblebees last week this feels more like a statement of intent from Furman on how time travel is going to work in the big storyline he has planned. Future Magnus has no memory of past Magnus' experiences, 1987 is no longer leading to the 21st century we've been reading about and that will have disastrous consequences.

There's also some nice fun to be had with Wreck-Gar, who isn't invited on the time jaunt but still flings himself into the field of the mystery machine as it zaps Hot Rod, Kup and Blurr into history for the sheer hell of it. It's a nice way of emphasises both his anarchic nature and the fact he's not a proper Autobot who has to bother with orders.

Back in the past Magnus helps deal with a blaze started by the eruption by punching down trees to create a firewall. But Cindy has revealed his presence to what she thought was a friend of his... Galvatron! And this is where Reed excels as an artist as the be-fanged monstrous Galvatron who jumps out of the flames is frankly terrifying. Though the effect is somewhat lost if you're an OCD freak like me as the misplaced and smaller than usual NEXT box is hugely distracting.

After the strong opening offered by the last two issues, this shows up some of the problems this arc is going to have, mainly there not being enough plot to fill 8 issues resulting in a fair bit of padding (specifically Cindy in this case). There's still a lot to like, but it's also hard to escape the feeling it doesn't quite have the fizz of earlier epics. 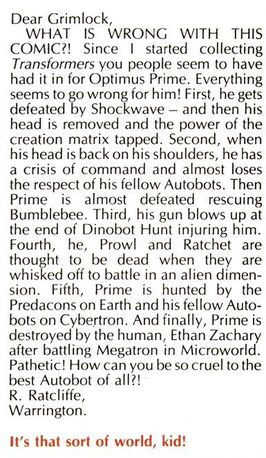 Wait till he reads ReGeneration One.
Transformation has to admit they made a mistake with the competition in issue 100 by asking readers to name 15 characters on the cover but only leaving enough options for 14. They make up for this though by allowing answers with both numbers to be accepted.

On Grimgrams we get what may well be the greatest letter in the history of the comic as R Ratcliffe of Warrington sends in a massive rant about how the comic has repeatedly mishandled Optimus Prime that starts with "WHAT IS WRONG WITH THIS COMIC?!" before becoming a prototype for the sort of over the top response the internet is now full of and which I have never ever partaken of myself, no Sir.

It's the punch line that makes it though, as Grimlock's response to this essay is the one line "It's that sort of world kid!” Now that's perfect comic timing.

Inhumanoids opens its third chapter with more bat action, and I've only just noticed the cartoon this adapts was written by Flint Dille. Considering the robot bat things in Five Faces of Darkness they must have been a phobia of his.

There's also an extremely bland advert for the products of Motivational Health and Leisure Ltd. that showcases some children in the most '80's tracksuits and jumpers knitted by your mother imaginable.

Next week, it's the second best Megatron/Galvatron/Senior team up.

[This piece was mostly written whilst listening to the Big Finish Doctor Who audio Mission to Magnus, which sadly has no OCD giant robots in it. Though it does verge on "Pass me the bomb" a couple of times.] 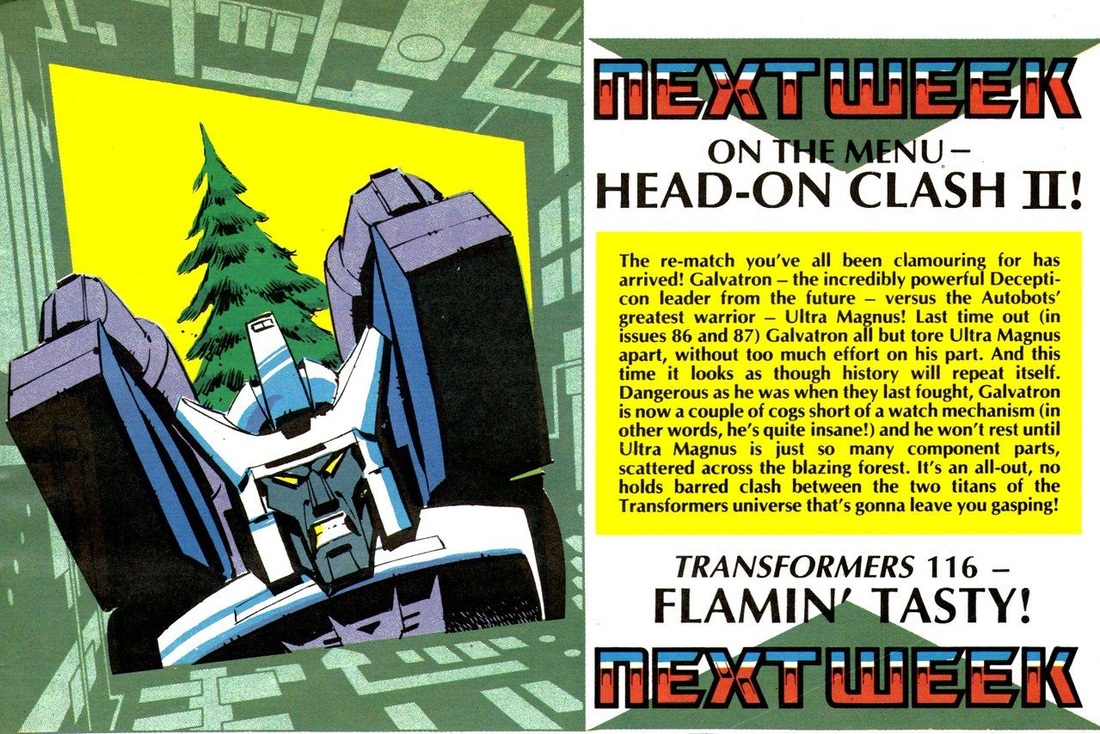 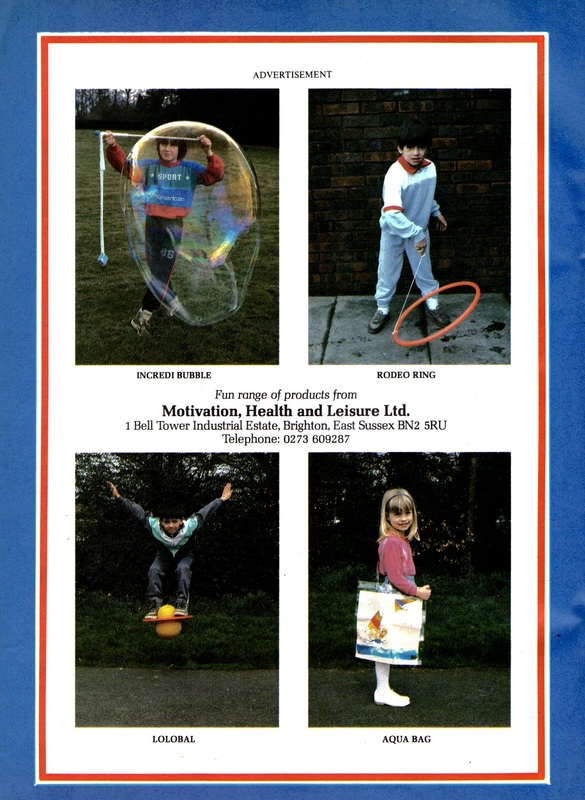